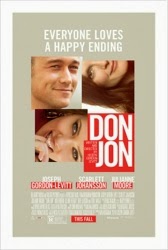 Don Jon, the new romantic comedy that marks the directorial debut of Joseph Gordon-Levitt, is a mess. But it's the kind of well-intentioned mess that only a first time writer-director makes.

Here is a movie bursting with energy and confidence. It's a movie with lots of things that it wants to say, even though it's never quite sure how to say them. It's a movie with likable performances and charm to spare. But in trying to tackle ideas like contemporary gender roles, self-absorption, misogyny and American sexuality, Levitt has made a movie that's rather self-absorbed and a little misogynistic. 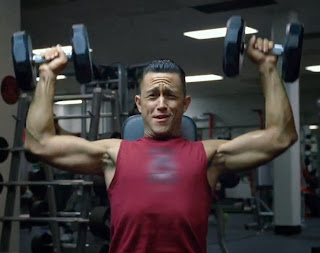 Levitt plays the title character, a New Jersey Italian bartender/stereotype dubbed by his two best friends as "The Don" because of how well he does with the ladies (apparently, he "crushes" a different one every night). Despite having a full dance sex card, Jon is still unfulfilled -- his conquests are nothing like what he sees in his beloved porn, which he watches to completion multiple times a day. When he meets Barbara (Scarlett Johansson), a gorgeous girl who makes him wait for sex while encouraging him to take night classes and hire a cleaning lady. She wants to make him a "better" man -- so long as he's willing never to watch porn again. So he has to be more creative with how he gets his fix, sometimes even looking at it on his phone in class. That's how he meets Esther (Julianne Moore), a widow partial to fits of weeping and hits on joints. As Jon tries on his first adult relationship -- complete with meeting Barbara's friends and family and bringing her home to weekly dinner with his family (which includes Tony Danza as his dad and a mostly-texting Brie Larson as his sister) -- Esther begins to open his eyes to the possibility that there's more to sex than just getting off.

Barbara doesn't fare much better, though. She initially seems to be interested in a connection that's more than just physical, but before long it becomes clear that she, like Jon, is trying to shape her world to match the one that exists in her mind -- the World that Should Be. Hers is informed by Hollywood romances and outdated ideas about what successful men should or should not be. She's ultimately just as selfish as Jon. The movie missteps in a big way by turning Barbara into a monster -- a shallow, manipulative opportunist lacking in love and compassion. It's an unflattering portrayal of women, and though Don Jon is clear to point out that she's just "one type" of woman, Barbara makes up one half of the leading females in the movie. 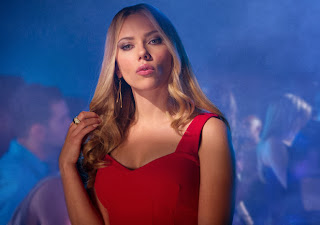 She also exists only in relation to Jon, not so much a person as prop to show us aspects of his character. Except he doesn't have much of a character either, so now Barbara is just a hot girl Jon wants to fuck but can't and who wants to change him even though she shouldn't because that's wrong. Except that, yeah, someone should be changing him. So what are we to make of that? That the performances work is especially impressive, as none of the characters in the movie have more depth than those in a Saturday Night Live sketch. With Jon, that's sort of the point -- he's an empty vessel, a creature of routine, not really waiting to be molded into something else but certainly leaving room for that possibility when the opportunity presents itself.

Julianne Moore is a welcome addition to any movie, even if her character is one of the movie's big problems. It's not her performance, which is good as always, nor is it her chemistry with Levitt -- she brings out a looser, more relaxed side of him as an actor. No, the problem is that Don Jon replaces its Barbara Problem with an Esther Problem. Barbara exists only to punish Jon; Esther is there solely to enlighten him. The women are present only for what they can do for the male lead. Moore creates more of a character than anyone else, mostly because she's given a small amount of back story that's handled with some restraint and, to be blunt, she's the best actor in the movie.

I'm complaining a lot about the politics of the screenplay, but I shouldn't let that overshadow the fact that it's a good movie, well-directed. I'm not the first to mention Edgar Wright in relation to Don Jon's editing, but its an apt comparison; many of the movie's biggest laughs come from the rhythms and repetition of the editing -- the way that Jon's laptop booting up can provide a punchline to a scene, or the way that Jon is shown cursing out every car on the road right before Levitt smash cuts to him walking up to church. The editing isn't always just used for comedic effect, though. There's some very strong visual storytelling throughout the movie that's only made possible by the way that certain images (like Jon walking down the hallway of his gym for a workout/confession) repeat themselves over and over. When those shots begin to change a little, so does Jon.

There's a lot to like in Don Jon, particularly as a first effort from an actor-turned-director. Levitt avoids several of the pitfalls of those that came before him; his movie is not as self-important as Ordinary People, not as precious as Garden State. This is a movie that celebrates being a first movie -- one full of filmmaking ideas from a technical standpoint. It's the kind of movie where you can tell the filmmaker lived with it in his head for a long time before it got made. The movie suggests that Levitt could have a future as a director, even though his screenwriting could use a little work. His heart is in the right place with Don Jon, a movie that ultimately wants to be sweet and believe that positive change is possible. Unfortunately like so many other romantic comedies, the movie seems to think that change is only possible after meeting one magical person. 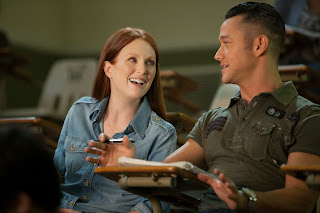 If there are some sticky issues to unpack in Levitt's script, at least he's made something that leaves the audience with things to talk -- possibly even argue -- about. How many romantic comedies are able to do that?

Posted by Patrick Bromley at 11:28 AM