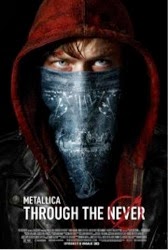 To use a horribly trite cliché, Metallica: Through the Never did not rock me. That was its only job. For that and many other reasons, it is a bad movie.

The other reasons are that it is lazy, self-satisfied, clumsy, fake-hard and has nothing on its mind. In its 94 minute running time there is maybe 1 solid minute of movie. It’s not even a one minute chunk. I mean 10 seconds here are good, 30 seconds there etc. And this is coming from a person who likes Metallica music. 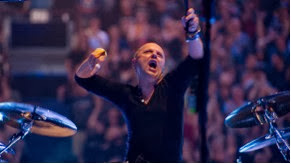 But before I eviscerate one of the worst movies of the year (which, just like Room 237, has fooled the majority of critics), let’s briefly cover the plot. The movie is centered on an arena concert where the band runs through a set list of their greatest hits including “Wherever I May Roam,” “Ride the Lightning” and “Enter Sandman.” While the concert is playing, Trip, a Metallica roadie-gopher (Dane DeHaan) is sent on a mission to retrieve a mystery item from a broken down truck in the city. On his assignment, Trip encounters hordes of angry mobs, a lucha libre dressed like Bane riding a horse and some riot police. Trip is accompanied on his journey by a weird puppet that he hangs on the rear view mirror of his van.

To be fair, let’s point out a couple of good things about Metallica: Through the Never. That puppet is amazing! There’s a part where I literally gasped in excitement because the inanimate object’s eyes moved. And then nothing is done with it for over an hour. Then, late in the movie, the puppet comes to life for about 10 seconds. And then nothing else is done with that.

Other cool moments are when the riot police start beating their batons against riot shields to the drum beat of one of the songs. That lasts for a few seconds and then stops for a generic riot sequence, shot poorly. Lastly, guitarist Kirk Hammett collects horror movie memorabilia in real life, so his guitar skins include artwork for White Zombie and Boris Karloff’s The Mummy. That’s all the good stuff. The music is fine, but a concert movie is about the performance, not the music. If you want to enjoy the music, you go to the show live (and not a live performance in a movie) or listen to the albums.

Metallica: Through the Never is trying to exist as a concert movie and also a rock opera. Both are fine things to be, as many great movies have been made out of both genres. But you need to have a reason to exist within those genres; you need to have a point to make. For example, the Talking Heads concert movie, Stop Making Sense, shows the band having a moment. They were in full power of their abilities and the band’s dynamic and individual personalities bled through the screen. None of that comes through in the Metallica movie. The guys are standing mostly in place (they have zero stage personality), trading really phony sounding banter and robotically barreling through their set list. It’s no question that Metallica’s best days are behind them, and the movie feels much more like artists trying to milk the tit as opposed to crash through any new barriers. Director Nimrod Antal (Vacancy, Predators) is working overtime in the concert sequences to convince us it’s high energy, but all the crane shots in the world (this film might hold the record) can’t convince me it’s just faking being busy. 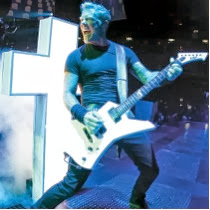 I hated the concept of the concert in many ways. There’s a sequence set to the song “…And Justice for All” where a giant Lady Justice statue is brought to the stage, built by the stage crew and then falls apart. It’s so deliberate and clumsy to the point of being infuriating. I just sat there waiting for the statue to fall, and then it falls and I’m saying to myself “Really?” Right before the encore, the stage fake falls apart and a couple of the stage crew are supposedly injured in an elaborate ruse to give Metallica an excuse to plug their instruments into amps to show how they can still rock without all of the over-the-top staging. Considering that staging was probably Metallica’s idea to begin with, it’s flat out embarrassing. Front man James Hetfield even has the hubris to say something to the effect of “C’mon guys, let’s do this just like we used to in the garage.” Barf. Table for one.

Also, these guys are acting like pussies. During the fake stage collapse, they ask the audience if they’re ok and are smiling at other times during the performance. Heavy metal is an attitude. Stop fucking smiling and being polite, you posers. Plus, I’ve never been madder at an audience in a concert movie than I was during Metallica: Through the Never. These aren’t metal-heads! They have fucking smartphones that they hold up throughout the concert.* No lighters anymore, just smartphones (insert “Wherever I May Roam” joke).  A true metal-head would see the dork with a smartphone and smash it. That’s rock and roll. This audience is a corporate suite. And where are all the metal babes? Isn’t that part of the fun of heavy metal music? They are hardly ever shown. 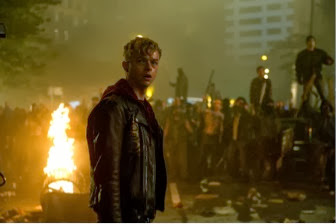 So what about the rock opera section with Dane DeHaan that runs in parallel to the concert? It’s just as bad. Awesome puppet aside, this section really has no story other than its video game setup and very little in the way of surprises or stakes. This section lasts maybe 20 minutes at most, so we get a couple of minutes here and there; just as something interesting happens, we leave the roadie story so we can go back to the Metallica concert. The choices of when to edit are just terrible. I’m not sure if the roadie portion of the movie is going for a vibe similar to The Warriors or what, but without knowing the motivation for the angry mobs attacking Trip, there’s nothing to be invested in. So you just sit there watching extras be violent for no reason.

The movie also squanders some cool ideas, like Trip setting himself on fire to be able to run through the mob that has him cornered. Guess what happens? They beat his ass while he’s on fire. Not the best idea, huh Trip? And this mystery item Trip is supposed to retrieve is such a McGuffin that I can practically see Metallica in a pitch meeting saying they have a McGuffin idea and then patting each other on the back. The mystery item is the biggest audience “fuck you” I’ve seen in a movie all year.

If that wasn’t bad enough, the worst part about the rock opera section is it has no point of view. Personally, I don’t like Pink Floyd: The Wall very much (it’s too depressing and suffocating) but I give all kinds of credit to Roger Waters and the filmmakers for having an idea and dramatizing an attitude, no matter how grim and humorless it was. It helps that The Wall was a concept album (which you can dramatize) while Metallica: Through the Never is more akin to a film version of a greatest hits album.

I went in with fair expectations for Metallica: Through the Never. I wanted to have a good time and/or see the band make a personal statement using the concert movie or rock opera genres. All I saw was a cynical exercise that doesn’t seem thought out in story or theme. This movie made me very angry.

*Here’s a rant: Don’t ever take out a smartphone at a concert to post a pic to Facebook, Twitter, Instagram etc. 1) The photo always looks far away and like shit; and 2) You are theoretically trying the “capture the moment,” right? You know what else does that? Your brain. Pay attention and you’ll have a memory as opposed to a picture. You paid $100 to be there and you want to look at the action through a 4” digital screen? Go figure.

Posted by Patrick Bromley at 7:36 AM