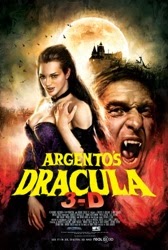 I can't imagine a greater fall from grace for any horror filmmaker than Dario Argento's Dracula. Not John Carpenter making The Ward, the worst crime of which being that it was uninspired. Not Wes Craven making My Soul to Take, which had the courtesy of being fucking crazy and watchable as a result. This is as bad a film as a professional director could hope to make, particularly one with the reputation of a Dario Argento. It is a movie so bad that it forces you not to question if a filmmaker has "lost" it, but whether or not he actually had it to begin with.

This is coming from someone who has yet to really take a shine to Dario Argento. I have seen all but one of his "classics" (I have not yet seen Bird with the Crystal Plumage) and just can't get on board with him as a filmmaker. At least in some of his better-respected movies, I get what people are responding to. Suspiria is beautiful to look at, has that great Goblin score and a nightmarish quality that I can see working on a lot of people. I'm not going to argue that Argento never had it. He did. But whatever he had is long, long fucking gone. In its place is a guy who directs with the skill and artfulness of someone who makes corporate training videos for White Castle. 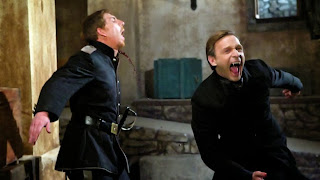 It's not like he had far to fall, either. His last two movies, The Mother of Tears and Giallo, are two of the worst horror movies I've seen from a respectable filmmaker (that didn't go straight to video). In comparison with Dracula, though, they seem much better -- they make an attempt to be either crazy violent or so goddamn insane and terrible that they circle back to being almost entertaining. Almost. Dracula does neither. It is a movie that is below contempt for its audience, because at least contempt would suggest a point of view.

Usually in reviews of this kind, I would spend a paragraph or two recounting the movie's plot. I don't need to do that here. It's Bram Stoker's story, only shittier. Sure, there are some significant changes made; Johnathan Harker was not turned into a vampire and killed in the original book. Also -- and I could be remembering Stoker wrong -- there was no giant praying mantis.

Yes, Dario Argento felt that what was lacking from this century-old classic was a huge fucking bug. It is on screen for only a few seconds in what has to be one of the worst special effects in a movie filled with the worst computer generated effects this side of 1990. Lest you think you should see Argento's Dracula just for the ironic laugh you'll enjoy when the praying mantis shows up, let me save you the trouble: 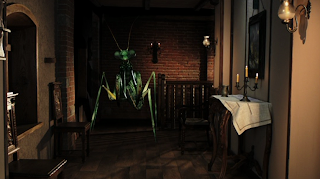 That's what it looks like in the finished movie. That's what it does, and that's how long it's on screen. You're fucking welcome.

German actor Thomas Kretschmann plays the title character as a guy who has lived for so long he literally can't get excited by anything. I do not think this was a deliberate choice the actor made. I think he is sleepy and bored by the material, and his performance reflects it. It is the worst cinematic adaptation of the character I've seen since Richard Roxburgh barfed his way through Van Helsing. This is a movie that manages to neuter Rutger Hauer, who plays Van Helsing in a performance only slightly more phoned in than his turn as Lothos in Buffy the Vampire Slayer (there is a lesson here about Hauer and vampires). It makes Asia Argento boring and unsexy. HOW IS THAT POSSIBLE?? No one comes out of Dracula unscathed.

A trailer for Argento's Dracula leaked several months ago, and the internet was quick to comment that while it looked like one of the worst things ever made, it had to be because it wasn't finished. The effects would get a polish. The photography would be digitally tweaked to look less like shitty video. NOPE. What everyone saw and excused as a rough draft is actually the version that Argento saw fit to release into theaters.


Ok, I take it back. That trailer actually makes it look way better than it is. Try and wrap your head around that.

The movie's full title is Dario Argento's Dracula 3D, because one of the big selling points of this bag of dicks is that Argento has made a 3D movie. I cannot speak to the quality of the the 3D. I saw it in regular old 2D. I can say that I counted only three instances in which it seemed like something was made to stick out "beyond the window" and into the audience's faces. One is a CGI owl that flies out of the screen (it's in the trailer). The second is a sword that juts out of the frame. The third is a smoke wolf.* I have to imagine that the awful, flat brightness of the image is to compensate for 3D screenings, where the glasses will darken the screen a shade or two. That's the best thing I can say about the movie -- that the filmmakers MIGHT have tried to account for their shitty gimmick and made their movie look even shittier as a result.

I'm out of things to say about Argento's Dracula. It is a movie so dull and uninspired that it can't even be bad in an interesting way. There is nothing -- NOTHING -- about Argento's "reimagining" of Dracula to suggest he had anything to say about the material or any new angle he was interested in taking. His vision consists of making the classic vampire story more terrible and in bad 3D. This might not qualify as a "vision." It has decent sets, I suspect because it was shot in some actual castles, but they have been dressed and the actors costumed so as to resemble a high school play. It is proof positive that Argento's best days are long behind him. He might want to make this his last film. If he's got another one in him worse than this, I do not want to see it. 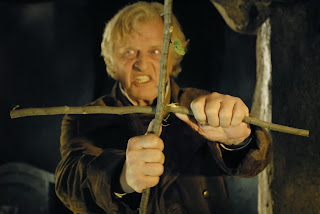 *Having rewatched the trailer, there are a few more obvious examples of "beyond the window" 3D, including an eyeball popping out (done better 30 years ago in Friday the 13th Part 3, and you can see the fucking wire in that one). There is also more gore than I remember. Do not be fooled; every bit of violence in the movie has been packed into that trailer to make it seem like the splattery Argento gorefest. The movie is exactly as graphic as that trailer. If only it were that short, too.
Posted by Patrick Bromley at 7:41 AM