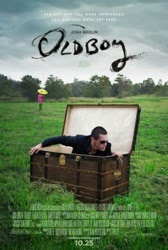 I don't know what to (re)make of this one.

Spike Lee's remake of Oldboy, which has essentially already come and gone in theaters, has me questioning all of my critical faculties. It makes me think it's entirely possible that I'm no longer able to distinguish between good art and bad art, so long as it is art. I'm exhausted by product, by bland concoctions of visual effects and studio notes designed in a lab to hit all four quadrants, whatever a quadrant is. But when a movie comes along that dares to be bold, that represents a genuine vision or that just has the courage to go down swinging, there's a good chance I'll be on board. Oldboy goes down, but it goes down swinging.

You know the story already. If you don't, stop reading this (I'm not going to spoil any of the major twists in this review, but I'm offended that you wouldn't stop what you're doing and immediately right the wrong of having not seen the original Oldboy). Josh Brolin plays Joe Doucett, a divorced alcoholic asshole who drinks, hits on married women, ignores his young daughter's birthday and then drinks some more. One drunken night, he sees a woman with a yellow umbrella; the next thing he knows, he's waking up in a tiny hotel room. Why he is there, he does not know. Who put him there, he does not know. But there he remains for 20 years, with only a television to connect him to the outside world. It's from the TV that he learns his wife has been murdered and that he has been framed for the crime. His daughter has been placed in foster care and wants nothing to do with him. Every night he is given dumplings to eat and a bottle of booze to wash it down. 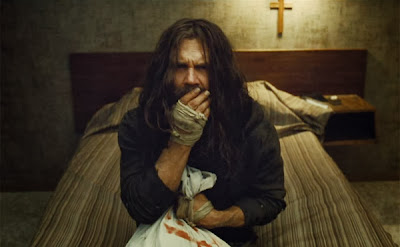 Then, 20 years later, just as he is preparing to escape, Joe wakes up in a field. He has been freed. Why he has been freed, he does not know. With the help of a kindly former addict named Marie (Elizabeth Olsen), Joe sets out to find his daughter, discover who who imprisoned him and exact his revenge.

When it's not being a sort-of bland retread of Park Chan Wook's original movie -- still one of my favorite movies of the 2000s -- Lee's Oldboy is a movie I kind of liked. Good or bad, I can no longer tell the difference. This movie exists in some unknown third category. It is sometimes crazy, sometimes terrible, sometimes great, always interesting not just for what it does (like retain the original film's "twist," which is seemingly all anyone cares about) but for what it does not do. It does not often feel like a Spike Lee movie. It does not truly understand what makes the original film brilliant. It also does not attempt to invent new meaning for itself, retaining the broad strokes of obsession and the price of revenge and paying for the sins of the past and blah blah blah, but it doesn't really connect any of its own dots. It's a movie with the ability to work in individual moments, but fails to add up to anything but a confused remake of Oldboy.

The movie was probably doomed from the outset. Remaking Oldboy is an impossible, unwinnable task.  But hiring Spike Lee to do it makes it fascinating, because he's maybe the last person you would expect to direct such a movie. There are moments where I can see what he's going for, but he's at a disadvantage. Park Chan Wook's approach to the material is operatic from the outset, so the BIG moments and the BIG themes with which his film is dealing feel at home. Lee tries to approximate that style, and the results are jarring at best and ridiculous at worst (the movie has the worst, most unintentionally funny "Noooooo!" moments since Padme Skywalker-Vader lost the will to live).

Very few filmmakers make bad movies quite as well as Spike Lee, a filmmaker who has directed some movies that are bad in such interesting ways that they secretly become good. Bamboozled constantly walks the line between good and bad (it's good). I still haven't made up my mind about Girl 6 or She Hate Me, which are either terrible or subversive but are never boring. Oldboy puts them all to shame by sheer force of crazy -- it's a bigger, nuttier movie in every way, making it the most entertaining but also maybe the most disastrous. I like watching Spike Lee fly too close to the sun. 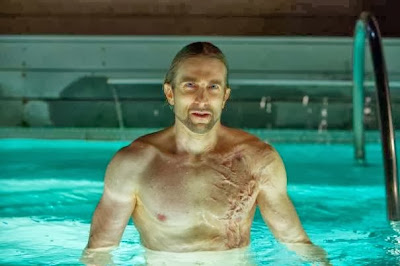 Speaking of disastrous, I must mention Sharlto Copley as the movie's villain (that's not a spoiler). The acting across the board is fine; Brolin is an angry, determined pit bull, Elizabeth Olsen is super pretty and warm (even if it's only because the script demands that she help Joe only because she is pretty and warm). Michael Imperioli has a supporting role because he is friends with Spike Lee. Samuel L. Jackson proves he is no longer capable of playing anything other than Samuel L. Jackson (Django Unchained notwithstanding). He is costumed in an insane way, once again suggesting a more interesting movie that might have existed but which contains only residue in its released form. It's Coolness for its own sake.

But back to Copley, an actor who may have stumbled on a great performance in 2009's District 9 but who may be incapable of repeating it. I'll give Copley this: he makes big choices in the movie. In a movie this overheated and occasionally ridiculous, Copley's performance makes everything else seem subdued and tasteful by comparison. Every affect he chooses to adopt feels like the wrong one. He pushes the movie into comic book movie territory, but it's a comic book movie from the mid-'90s. By the time he and Brolin literally walk through their history together (courtesy of a flashback sequence into which both actors are inserted), it becomes unintentional comedy. But again, at least it's a choice -- maybe the wrong one, but I admire the willingness to go there. This movie did not bore me. It did not numb me with endless spectacle and battle scenes. It did not go out of its way to make a lot of cutesy allusions to the original movie minus one reference to the octopus scene, which can actually be interpreted as more than a reference in the remake thanks to the way it's shot and Brolin's performance.

There are visual motifs throughout the movie that have no real thematic purpose, suggesting a) the meanings were cut out or b) Spike Lee doesn't understand the function of a motif. The woman who first drugs Joe carries a yellow umbrella that has hash marks on it (you can see her on the poster). Then Joe marks the passage of 20 years by tattooing hash marks on his arm. Does he do this because of what he saw on the umbrella? Probably not. Did the umbrella woman know he was going to make hash marks on his arm? She couldn't have. So it makes a striking image, but there's nothing behind it. Coolness for its own sake. 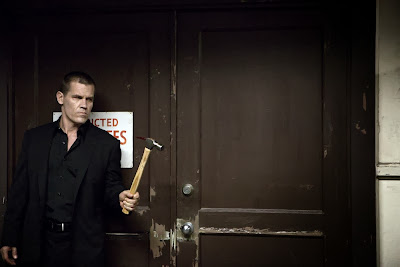 The same could be said about the famous hammer fight, which Lee has carried over to the remake and cranked up to 11. It doesn't make any logistical sense. Its only dramatic function is to demonstrate how angry and focused Joe is on fucking up who stands in the way of learning the truth. But that's a point that's made over and over again, so is the hammer fight totally necessary? I have no idea. It's a cool scene. It's ridiculous. As big as it goes, it could have gone even bigger.

That's true of the whole movie. I wanted more Spike Lee in Oldboy. As insane as the movie gets, I wanted it to be even more insane. There are moments of stylistic flourish and typical Spike bombast that are among the best in the movie, because even when they don't work they are the work of a strong authorial voice; this may be one of Spike's director-for-hire gigs, but he doesn't phone it in. You may not like this remake, but is there another version that would really have been preferable? Sure, yes, don't remake it at all. But think of the number of remakes that could have been directed by some music video guy only interested in visuals -- someone without Spike Lee's courage and willingness to fail and fall on his face.

Plus, this version sticks the landing. It's one of the biggest departures from the original movie and it's great, tying the movie together thematically in a way that the rest of the 120 minutes barely earn. I actually like this ending better than Park Chan Wook's, but the comparison isn't really fair. They're about different things. As bad as the remake can be at times, it has one of my favorite final shots of a movie this year. 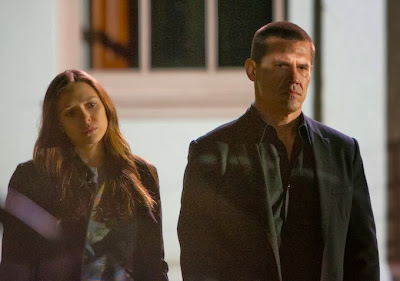 Maybe it's impossible to really review Spike Lee's Oldboy, since it sounds like at least an hour was chopped out of it and everyone involved has most disassociated themselves from it. Josh Brolin has been vocally unhappy about the released version, but maybe that was just a cry for help (he is an addict). Even the distributors seem to want to forget it, dumping it on a few hundred screens during one of the busiest times of year with very little marketing or promotion (it's getting the Southland Tales treatment). It's possible that this Oldboy was once something that felt very different. It might even be a masterpiece. I kind of doubt it, because Sharlto Copley's performance would still be in that version, but who knows? Maybe the longer cut was more hospitable to the pitch of Copley's bad guy turn.

The fact remains that we will probably never know what the movie was originally intended to be. Everyone involved is cutting their losses, so it's unlikely that they will spend the money to release the longer version. It's too much a financial failure to really get the special edition treatment. It will remain a footnote on Spike Lee's career. A failed experiment.

It's not my job to review movies that might exist. It's my job to review the movies that do exist ( -- Patrick Bromley, F This Movie!). And the remake of Oldboy that does exist is a mess, albeit a mess I kind of like for all of its messiness. Bold, bruised movies like this one are a weakness of mine. After consuming so much product year after year, sometimes I just want to eat something alive. Good, bad or fucking ridiculous, Spike Lee's Oldboy is alive. 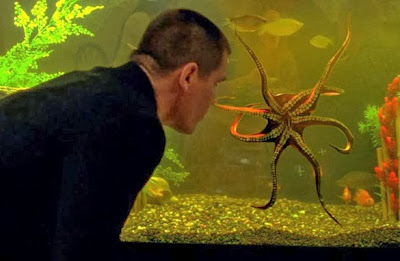