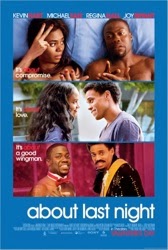 The new remake of About Last Night makes Hitch look like Annie Hall.

The plot in brief: About Last Night follows the ups and downs of two relationships: the volatile twosome of Bernie (Kevin Hart) and Joan (Regina Hall) and their sweeter friends Danny (Michael Ealy) and Debbie (Joy Bryant), who are fixed up by the other couple. Will each pair be able to survive all of their own self-induced efforts to sabotage their own happiness? Do you even care? You shouldn’t. These people are all ciphers.

I don’t enjoy being this nasty towards a movie, but About Last Night mostly cooks up bad feelings. Only one of the four main characters has any personality outside of his or her respective job or apartment, so all that is left for dialogue is truly weird, mean-spirited views on love from people who seem to not enjoy being in love all that much. The one who acquits himself is Danny, because he’s given the character shading of being a Los Angeles Dodgers fan. In fact, there’s one scene I appreciated a great deal where Danny invites Debbie on an early date to a Dodgers game and holds firm on sitting in his bad seats because they are the ones he inherited from his dad. This is slight, yet effective, character development. Danny is presented as a romantic who is loyal and traditional to ideals and the actions of his character follow suit. The rest of the characters have no such qualities. What kind of music do they appreciate? Movies? Food? What are their political or moral points of view? What kind of families do they come from? Who are these people? 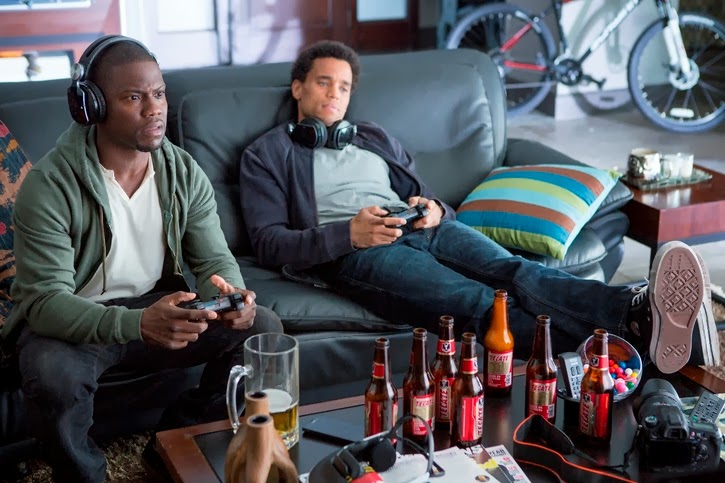 This is a that falls on writer Leslye Headland, who was behind the equally unsatisfying and smug Bachelorette. I’m not one to usually object to a white person writing for black characters, but in this case I think it hurts the movie. Something is off about the whole of About Last Night. This movie feels written for white characters in their twenties and not black characters in their thirties. The apartments look overproduced and uninhabited, comparable to the ones from Sex and the City or the recent That Awkward Moment. The guys are spending their time playing Xbox and one character (supposedly a big sports fan) is suggesting how his favorite sports bar should be turned into a tavern with a beer garden complete with twinkle lights. I’m not saying a person who is not white wouldn’t be interested in these things, but it plays out similar to the book Stuff White People Like if it were made into a movie. Considering how many of the absolute best ensemble and romantic comedies in the past 20 years have featured primarily black casts and filmmakers, this is especially disappointing. Most of those movies have a warm and worthwhile point of view. About Last Night 2014 is Starbuck'd, flavorless and seemingly informed by people with little life experience as adults.

About Last Night also suffers from the “riff, Kevin, riff” problem. Much of the screen time devoted to the Kevin Hart and Regina Hall coupling feels improvised, as if director Steve Pink let the two of them run with their outbursts. These rants start vulgar and funny but grow quickly tedious; at a certain point, it becomes more about landing a joke and I couldn't understand why Bernie and Joan would even want to be a couple. These two performers, agreeable and funny in other movies, feed off each other and bring out one another’s untapped worst qualities -- Kevin Hart’s cynical arrogance and Regina Hall’s interpretation of a female Kevin Hart. Why do so many romantic movies think that audiences want to see characters that crave conflict or think the only way to display passion is to be at each other’s throats? 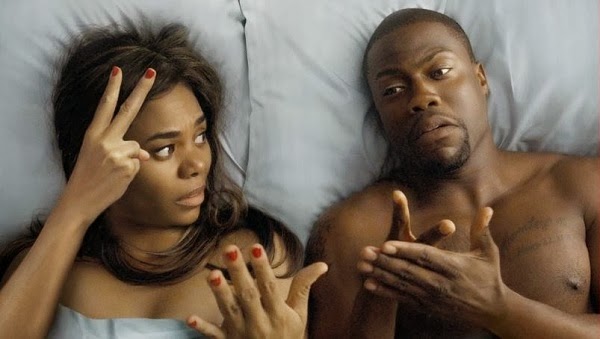 As for the rest of the actors, Michael Ealy is a more charismatic than interesting performer. Here he acquits himself fine. Joy Bryant is cute, but it’s disappointing to see here be such a bore after her sweet and affecting supporting part back in 2002’s Antwone Fisher. She just never took off. The two have decent chemistry but are too bland and not worthy of their own movie. Also featured is Christopher McDonald as the sports bar owner. This is a movie that doesn’t know that having Christopher McDonald in your movie can be a valuable asset.

About Last Night announces its lousiness fairly early on, so I quickly grew impatient with it. It’s the type of movie that even rolls out the old trope of the ex-girlfriend (Paula Patton) coming back into the leading man’s life just to fuck with his current relationship. Of course, the guy is so stupid that he brings her back to his apartment so we can see a scene of him maybe getting busted by the current girlfriend in a wacky misunderstanding.

The movie was directed by Steve Pink, who also made the somewhat underrated Accepted and the meh Hot Tub Time Machine. About Last Night is the worst of the three, but even more disappointing because Pink was one of the writers behind High Fidelity, a great romantic comedy full of character specificity, humor and flawed but sympathetic characters. I think at least half of the movie’s problems would be solved if it were written by Pink instead of Headland. My favorite faux pas of hers is this: in a scene set on Thanksgiving Day, she shows a group of people watching football. College football.
I got a 26 on my ACT in high school. If you got that or higher, you are probably too smart to enjoy About Last Night.
Posted by Patrick Bromley at 7:21 AM