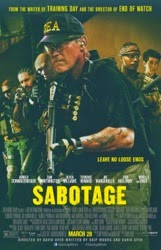 I'm-a set it straight, this Watergate.

There are few movies released in the last six months that I wanted to like more than Sabotage. It's a cop movie, which I'm predisposed to love. It stars Arnold Schwarzenegger. It stars Sam Worthington as Fred Durst. It's written and directed by David Ayer, whose movies I generally enjoy even when they are Street Kings. I like the supporting cast, which includes Terrence Howard, Josh Holloway and Joe Manganiello. I wanted to see Mireille Enos play something other than a supportive elfling. I was in the bag for this movie before it even started.

But Sabotage resists my liking it for almost the entirety of its running time. This is an ugly, ugly movie about ugly, ugly people. That would be ok if it wasn't also pretty bad. 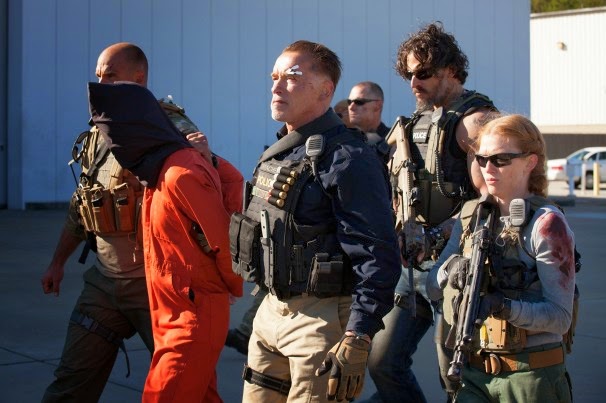 Arnold Schwarzenegger plays John Wharton -- better known as "Breacher," because this is the kind of movie where every character goes by a nickname like "Monster" and "Grinder" and "Pyro" and "Tripod." It has the depth and maturity of G.I. Joe. Breacher is the leader of a super elite DEA task force that look and act more like a biker gang -- they party hard, get in fights and fuck shit up. They're described as the best undercover agents in the world because they're basically criminals, which they prove when they try to rip off $10 million in a drug cartel bust. The robbery goes bad, but the aftermath is even worse: one by one, Breacher's team starts getting killed off in horribly violent ways by a mystery assailant.

There's the premise for a good movie inside of Sabotage, written (with Skip Woods) and directed by David Ayer, the foremost authority on Dirty Cop movies (his credits include Training Day, Dark Blue, Harsh Times and Street Kings). The cast is great, and for the first 30 minutes or so I was way into the movie. Then they started to get killed off, and I realized I didn't really want to see a movie in which a bunch of actors I like are killed off one by one. I want to see them together being cops and shooting bad guys and kicking ass.

Thirty seconds after that thought, I came to another realization: I didn't care if these characters got killed off. Because although I like all of the actors (even the pair of cops played by Harold Perrineau, who is very natural and likable, and Olivia Williams, who is very terrible), I couldn't stand any of these characters. They do nothing but shout and swear and spit and make faces and posture. They are horrible, uninteresting people, being played by actors giving career-worst performances. Sam Worthington and his six accents do an ok job as Everlast and Merielle Enos starts out cool, but everyone else is in a constant pissing match for biggest overactor. And they ALL WIN. Between this and Street Kings -- which also featured a great cast giving terrible performances -- Ayer's two major directions for his actors appear to be "Bigger" and "Worse." 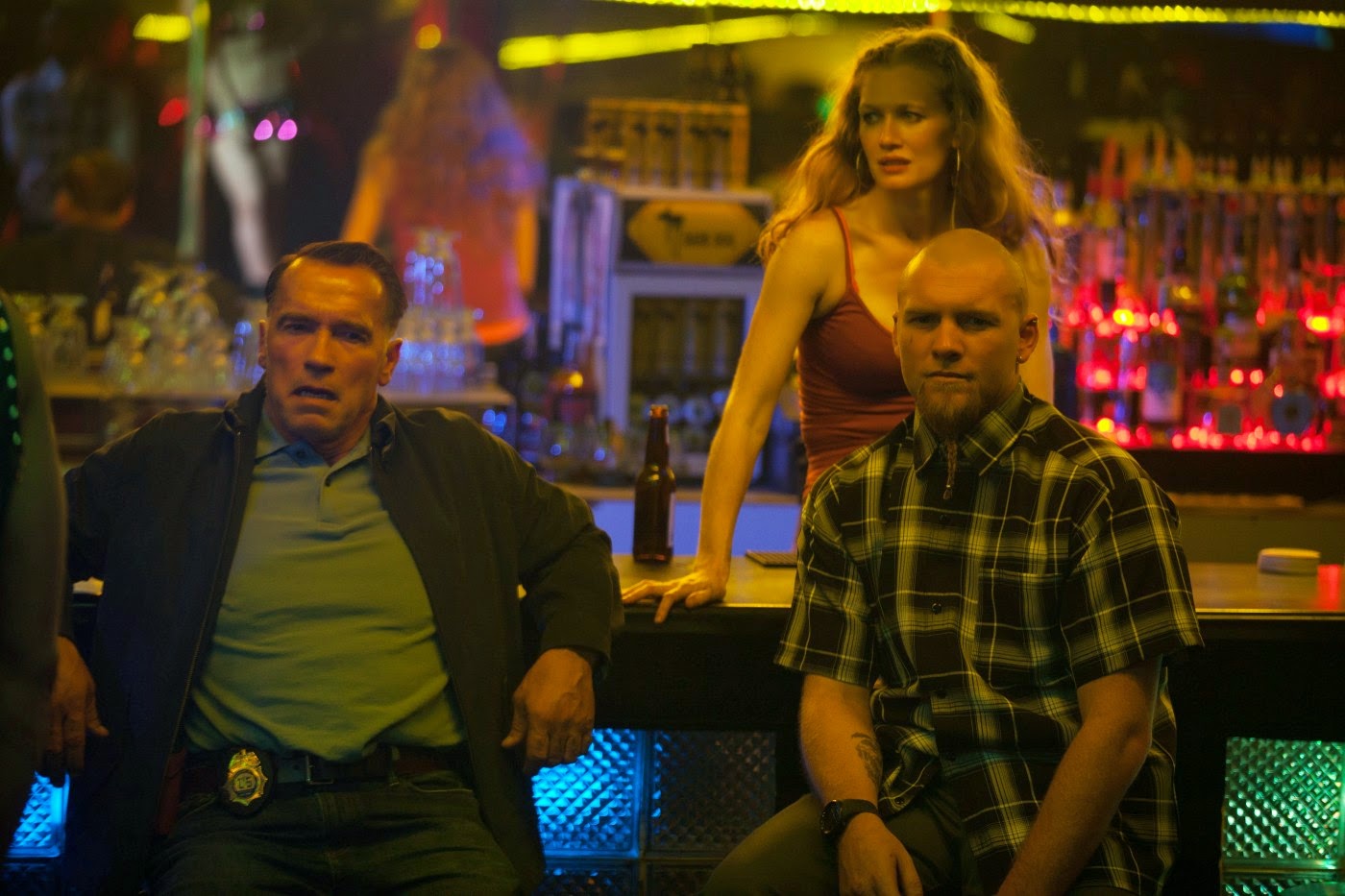 There is such a thing as having an antihero that, while perhaps not "likable" or "sympathetic," is interesting to watch. It's probably unfair to use Denzel Washington's antihero in the Ayer-scripted Training Day as an example, seeing as how he won an Oscar for the performance and is Denzel Washington, capable of making almost any character interesting, but no one in Sabotage really comes close. Everything about the movie feels pitched at the level of a Saw movie, from the brutal gore (this is easily the most violent movie Schwarzenegger has ever made, so I guess it distinguishes itself that way) to the way the characters are constantly shouting and overacting to the overall ugliness of the whole thing.

And then there is Schwarzenegger, who is miscast. As a lifelong fan of him as a movie star and a supporter of his post-political comeback, I see where Sabotage is interesting in how it fits within his filmography. He's never made this kind of movie before, nor played a character like Breacher. But that doesn't make his work in the movie any better. Yes, he curses more than we've ever heard (everyone curses a FUCKING LOT) and he womanizes and smokes his cigar and parties with his team, but Schwarzenegger doesn't commit to any of it. Say what you will about the rest of the cast, but at least they commit (especially Sam Worthington as Mike Muir). Schwarzenegger drew criticism for being rusty in last year's The Last Stand, his first starring vehicle in over a decade, but it stands to reason that he need to shake some of the cobwebs. He followed that up with Escape Plan, which isn't a good movie but features what might be the best acting he's ever done. That makes it especially disappointing that his performance in Sabotage falls flat -- he was primed to do good work in a movie that pushed him in new directions. It's the kind of thing he needs in this, the third act of his career.

Speaking of acts, that's the biggest problem with Sabotage: it is missing its entire first act. We are hinted at some of Breacher's back story but not told what it is, despite the fact that it sounds more interesting that much of what actually happens in the movie (and would have turned Sabotage into Arnold's A Man Apart). We are introduced to the characters as they do something that fundamentally changes who they are and how they act as a group, but we never get to know who they are or how they act as a group before this happens. They begin as miserable, mistrusting assholes and remain as such for the film's entirety. If David Ayer wants to make a movie that shows rotted souls (his bread and butter), it might help if we got any kind of glimmer of those souls before the rot set in. Or that the rotten assholes are interesting rotten assholes. These guys and one girl just drink and swear and yell at each other. 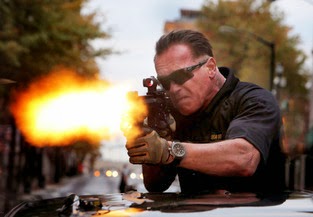 Ayer's script is a mess. Disregarding the larger structural problems, the film lurches around from scene to scene with little purpose or motivation. Scenes, subplots and even entire performances could conceivably be removed and not alter the end result. Characters show up when it's convenient, then leave as an easy out. They make choices that are wrong and stupid even by the movie's internal logic. Breacher doesn't seem to give a shit when one of his team is killed. If we can't stand these guys and even their boss isn't phased, how are we expected to care? It ruins any stakes the movie has, and when the answers do come it forces us to question whether or not the mystery mattered in the first place. Twists only work when they get us to rethink everything that came before. Sabotage fails to do that; when we rethink the prior events, we only realize none of it means anything. Our hands close on toxic air.

Sabotage is such a missed opportunity. I would gladly watch a movie with this exact same cast playing the most badass team of DEA officers taking down scores and cleaning up messes. Oh, how I would watch that movie again and again. This movie, though, is completely one-note, and it's a pretty sucky note. Had Ayer and Woods written a better script, they might have overcome the one-note, overblown approach. Had they taken a better approach, they could have overcome the weaknesses in the script. By getting both things wrong, they blew their chances of making a movie that works. They sabotaged Sabotage.
Posted by Patrick Bromley at 7:38 AM