I was happy this past weekend. A few weeks ago, I got a wild hair up my butt and booked a flight to Los Angeles (land of donut shops and Satan) for spring break.

"That way," I reasoned with myself, "the wife and I can visit our son AND attend the CineMayhem Film Fest opening night event, featuring a Q &A with horror master John Carpenter and a screening of The Fog. We could also learn more about this ‘California’ that Doug always claims is ‘a real place’ and ‘where he lives now.’ That could be fun."

Heather believes in the soft opening. The event was set to begin at 8:00 p.m.; we got there early because I am always early, sometimes crazy early. Yet the doors were open; we could go in. Every con and film fest should use this simple tactic: reward people for arriving early. LET THEM IN. This would undoubtedly reduce the most frustrating part of these events: the pointless, uncomfortable line. Please don't tell me that everyone would then just show up crazy early because you know that most people won't. (Again, more on this later.)

What was inside the envelope with our wristbands? CineMayhem buttons. I love buttons! Another thing Heather has learned: fans dig cool swag. 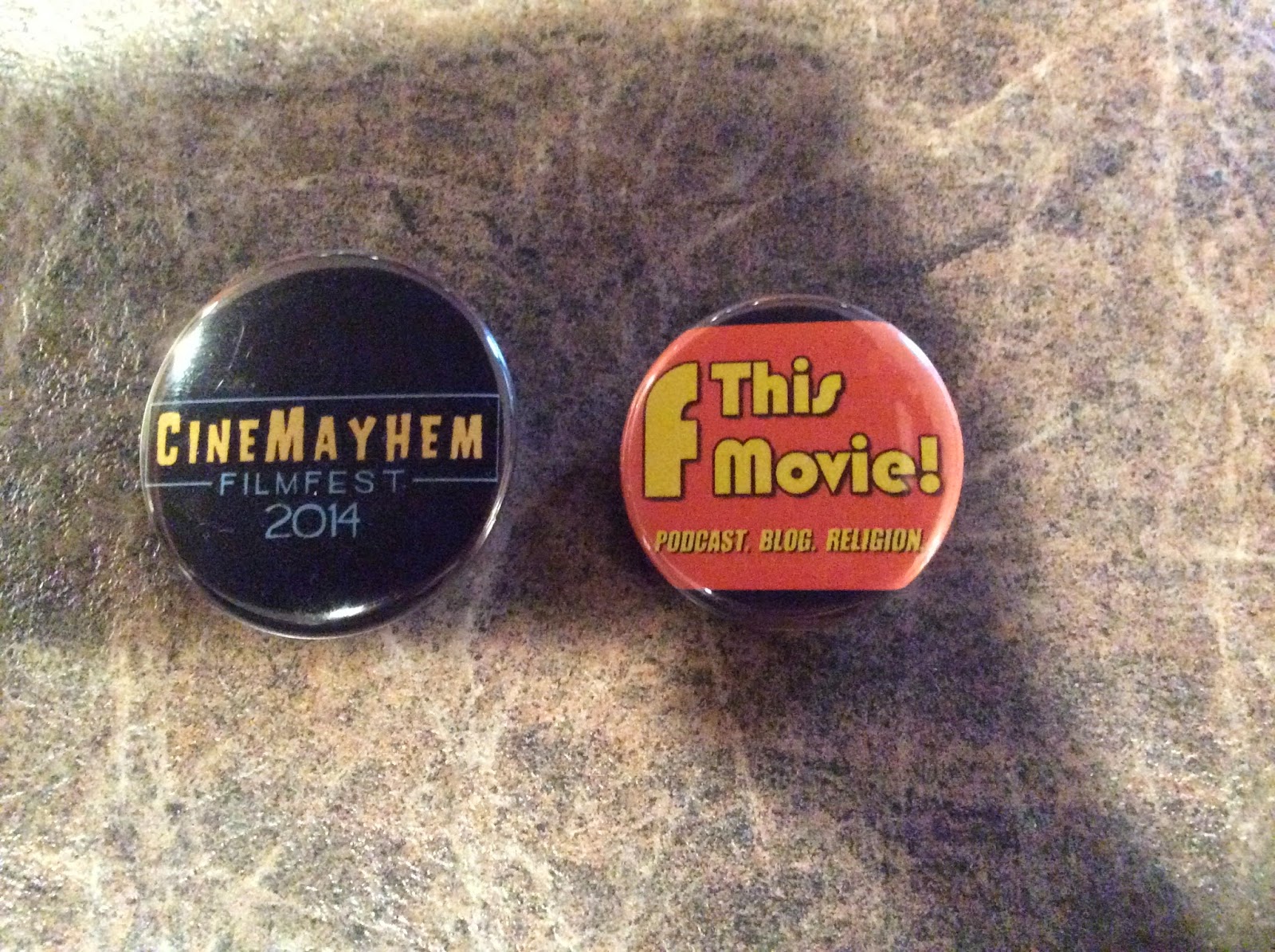 Heather chose the Jumpcut Cafe for the event, a Studio City coffee house with excellent joe, homemade lemonade (delicious), sandwiches and chili. Yum. She kept the event small; the room held about fifty. That was wonderful. No one does anything small anymore; the prevailing ethos of cons and fests seems to be LINE 'EM UP, CROWD 'EM IN, TAKE THEIR CASH. Disgusting. I was impressed by the intimacy of the setting. All of us attending were actually "people in a room," not “marks in a venue.” Nothing improves a film screening like that great energy created in a smaller space filled with people who are excited to be there. 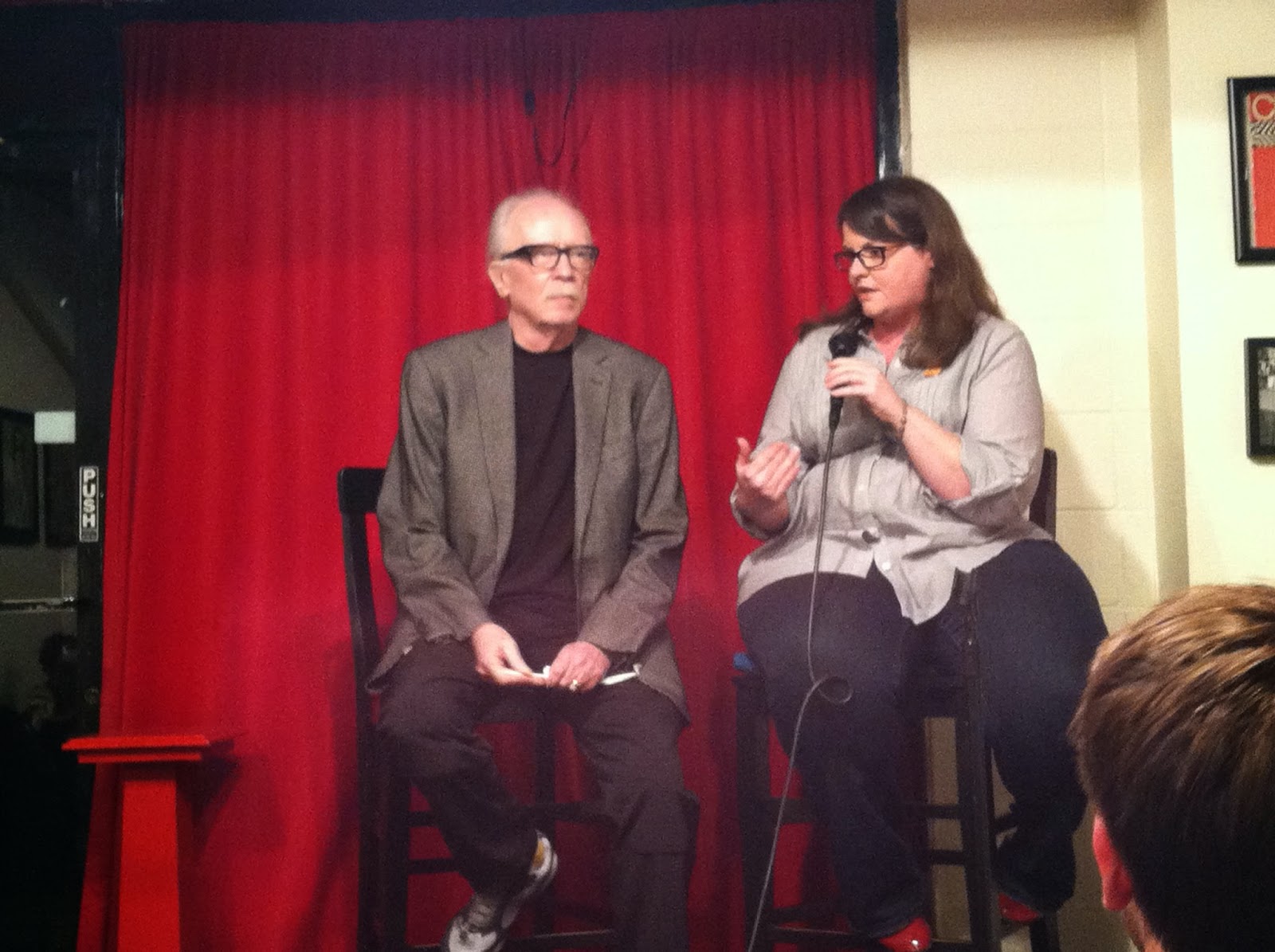 Oh, did I mention? Tickets were FREE.

John Carpenter showed up and talked to us for about an hour. Carpenter is one of my heroes. Ms. Wixson apparently shares my tastes; she got him talking about his work in an interesting, casual way without coming off as a fangirl or a know-it-all. (I’ve had it with con “hosts” who want you to believe that they are either the leading expert on, or best personal friend of, the guest.) Another thing Heather got right – the Q&A was scheduled before the screening, instead of after. The audience was more engaged, and it was cool to watch the screening with an eye out for the moments that Carpenter had just referenced.

Carpenter spoke honestly and playfully about his films and answered questions from the audience. One impossibly handsome (and single) AFI student asked Carpenter a question about his writing process and the usefulness of outlines. Carpenter's response was thoughtful and specific. He reminded us that he started out writing scripts, thinking he could "write his way in" to being a director. MORE? Bottom line: Carpenter believes in outlines, adding that they can sometimes "save your ass."

Carpenter regaled the audience with the production history of The Fog, noting that when the film was finished, it “wasn’t very good.” He said that reshoots, re-edits, and a new musical score whipped the film into the shape we all know and, hopefully, love. The Fog is one of Carpenter’s most interesting films, if only from the standpoint of tone or story structure. It very much resembles the “story told around the campfire” that the film’s opening recreates.

Another audience member asked about the critical reception that Carpenter’s The Thing remake received when it was first released. Carpenter recounted that many horror fans were not happy with what he had “done” to Howard Hawks’s original film, calling it “sacrilegious.” The remake’s financial failure, Carpenter recounted sadly, seriously impacted the projects he was then offered.

Compare these exchanges to the one witnessed not too long ago by FTM’s own Mike Pomaro: an audience member at another con actually asked Carpenter why he and his first wife, actress Adrienne Barbeau, had divorced!

One of the most interesting questions came from a young man who asked Carpenter about the political content of some of his films. He was, of course, referring to the sometimes-radical political agenda put forth by movies like Carpenter's Escape From New York and They Live. Carpenter laughed, clarified that "not all of my films have that," and then patiently explained that the way films are made now, that content and those ideas are simply not allowed.

This tied neatly to one of my favorite comments made previously by Carpenter in one of the many horror documentaries in which he has appeared as a commentator. (Just ask Patrick; I quote it all the time.) In The American Nightmare, Carpenter talks about "getting away with things" in his early films that he doesn't think "they would let [him] do anymore."

Speaking of documentaries, I very much wanted to ask Carpenter a question, but so many of them came to mind, I couldn't choose just one. I wound up just thanking him, as a film teacher, for his generosity in taking the time to share his insights in so many horror documentaries (Fear In The Dark; Nightmares in Red, White, and Blue; the aforementioned The American Nightmare; and even the tram video on the Universal Studios tour, talking about our love of monsters!) As a contributor, Carpenter consistently has some of the most interesting things to say; my students always point this out and I agree. Carpenter seemed to appreciate the compliment. I was afraid that I sounded impossibly geeky, but the CineMayhem audience applauded and that allayed my fears.

As for The Fog, what can I say? It’s a great example of Carpenter’s work, and the audience loved it.

AN ANNOYING AUTOBIOGRAPHICAL PAUSE: During the screening, we experienced a mild earthquake, my first. It was so odd—not what I was expecting at all. Because everything I know comes from the movies, I was expecting a shaking room, girders falling from the sky, and Ava Gardner faking suicide. The reality is much smaller and much creepier; I thought someone was surreptitiously kicking my chair.

MEANWHILE ON THE OTHER SIDE OF TOWN: Almost by accident, I remembered that Monsterpalooza, a horror con that I had read about on the Classic Horror Film Board, was also taking place in L.A. this past weekend. Would it be possible to also attend that con for a few precious hours before I had to catch my plane?

Because the promoters of Monsterpalooza do NOT believe in the soft opening, I was forced to stand in line for more than an hour because the doors opened at the exact start time. I arrived at 10:00am; the show started at 11:00am. The long line meant I spent much of the little time I had simply waiting to purchase my admission. This severely impacted how much time I had left to enjoy the actual event.

So thanks again, Heather, for getting it right. My family, friends and I had a wonderful evening at CineMayhem, one I will not soon forget. 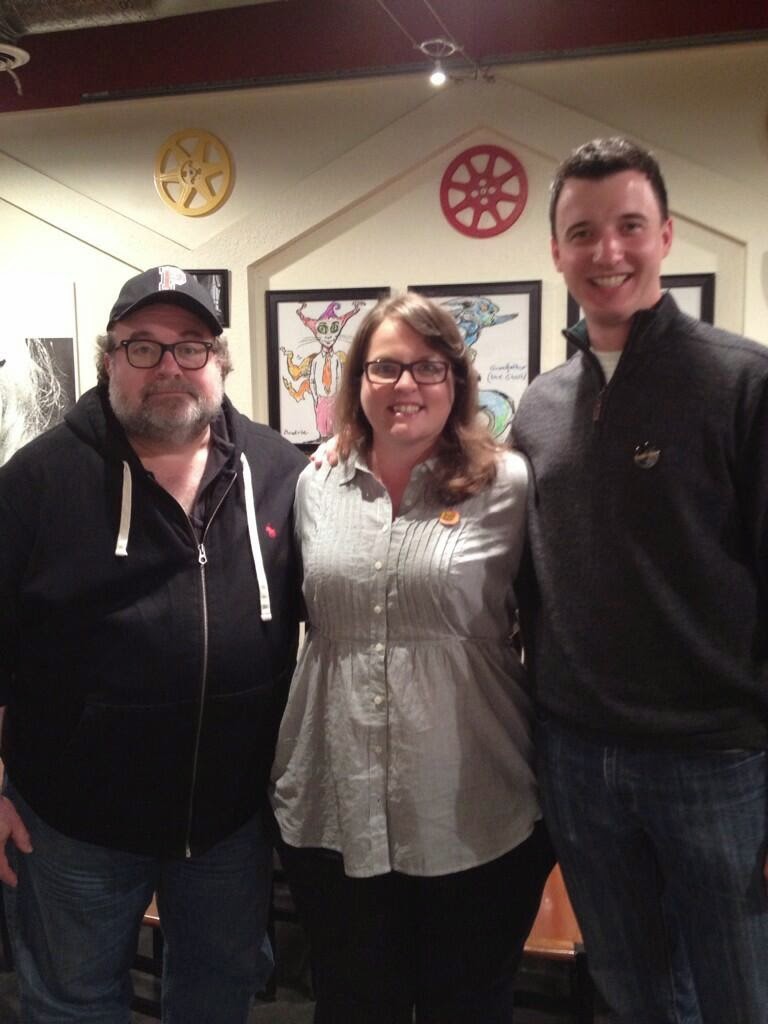 Posted by Patrick Bromley at 11:41 AM