Heavy Action: In the Blood 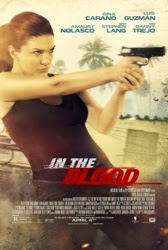 I love Gina Carano. Love alone cannot save In the Blood.

Everything about In the Blood, the new action movie from director John Stockwell, feels like it should have gone direct to video. From the cast (which includes Danny Trejo, Luis Guzman and Treat Williams) to the photography that looks like an episode of Burn Notice to that awful poster, this thing screams DTV. The fact that it is getting a theatrical release -- albeit limited -- is a weird miracle. And while I would normally advocate that you find a theater near you playing the movie (assuming there is one) and support small action movies, I can't in good conscience do so. You're fine waiting for DVD on this one. Or waiting until USA is showing it at 2 a.m. on a Thursday, right after another airing of Half Past Dead. That's probably the best way to watch it.

Former MMA fighter Gina Carano plays Ava, a recovering drug addict who marries a man (Cam Gigandet, whose name makes me want to punch my dick just for typing it) she meets in rehab. While vacationing on their honeymoon in the Caribbean, her husband goes missing and Ava -- who has years of combat training thanks to her crazy father (Stephen Lang in flashback) -- goes on a rampage to find out what happened to him. 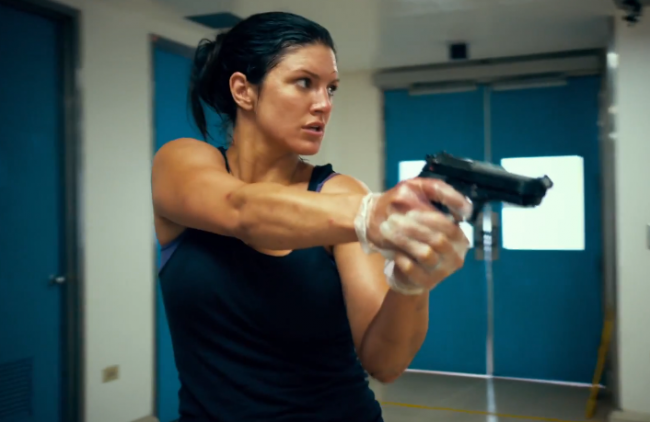 That describes a simple plot for In the Blood: Gina Carano's husband goes missing, Gina Carano gets payback by beating ass. Simplicity would have served this movie well, as its screenplay (by James Robert Johnston and Bennett Yellin) is filled with unnecessary detours and endless exposition. There's a First Act fight scene in which Ava beats the shit out some girls at a club and another Third Act scene in which she finally takes out the bad guys. The entire middle section consists of Ava walking around and interviewing people, and it is dull, deadly death.

In the Blood is Carano's first leading role in an action film since 2011's Haywire; her only other significant acting was in last summer's Fast & Furious 6, in which her performance was...problematic. She's better here than she was in that movie, but still isn't being used properly. Steven Soderbergh was the first to really see a movie star while watching one of Carano's fights and tailored the script for Haywire to her strengths, playing up her physicality, scaling back the dialogue and even re-dubbing her voice (with Laura San Giacomo's, reportedly). Soderbergh understood that she's particularly brilliant in fight scenes, so he let her fists do most of the talking. When she fights in In the Blood, it's the best stuff in the movie; MMA-trained Carano fights with equal parts grace and incredible brutality. When she punches someone, it's not a "movie" punch -- it looks like she's really trying to take someone's head off.

When she's not fighting, it's not as good. In the Blood has her not fight a lot. She glowers and stomps around and argues with everyone, from Luis Guzman's corrupt police chief to Treat Williams, who is in the movie for some reason as Cam Gigandet's (punch punch ow my balls) father. Williams resents Ava and blames her for his son's disappearance. I'm not sure why. It has something to do with both of them being former drug addicts. Why this element is introduced, I cannot say; it matters for roughly two lines of dialogue (once when they say "We were junkies!" and once when Treat Williams says "You were junkies!") and then is forgotten. That's the kind of stuff that makes the movie feel like such a mess -- there are too many elements taking away from the conflict at the center and getting in the way of the action. This needs to be more of an action movie. It isn't. On the plus side, Carano gets to play the closest thing to a real person she has ever played. She's not just a weapon -- except for when she is, as trained by her crazy dad so as to explain how she's able to kick so much ass...because otherwise we wouldn't by that someone in Carano's physical shape could? 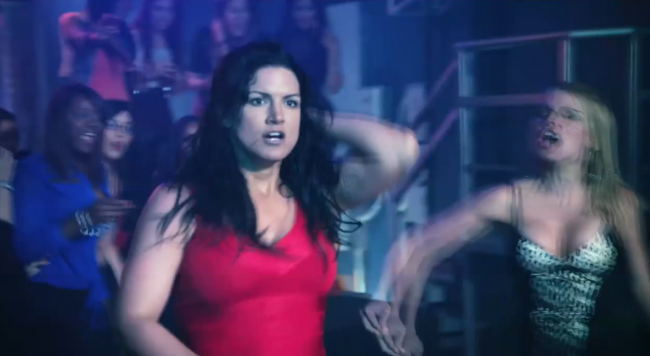 Director John Stockwell does do something right. Not to sound crass, but Carano is very beautiful and almost impossibly sexy and spends much of the movie in vacation clothes -- outfits that range from skin tight to barely there. It's kind of Stockwell's thing; his resume includes Blue Crush and Into the Blue in addition to this, meaning he is to tropical bathing suit climates as Scorsese is to New York. Other than the blue water and the swimsuits, there is nothing to distinguish his style as a director; the movie doesn't even get as third-act-crazy as Into the Blue, a movie that's about beautiful people swimming until some motherfuckers start getting shot with harpoons. If only In the Blood allowed itself to cut loose like that.

The supporting cast appears to be on hand to lend the film some DTV credibility, but the performances by Treat Williams, Danny Trejo and (especially) Stephen Lang amount to nothing more than cameos. The real villain of the movie is Prison Break's Amaury Nolasco, who's mostly a glorified cameo, too (because if Ava discovered who the bad guy is before the last 30 minutes we would have lost all of those scenes where she walks around asking who the bad guy is). At least Nolasco gets off a couple of funny throwaway lines, even though he's still a generic villain. There is a bit of a twist in his endgame (one that recalls the much better Steve Austin/Dolph Lundgren DTV actioner The Package), which I'm sure the screenwriters were pleased with because it gives double meaning to the title of the movie. Good job, cleverness. Now write a fucking script. 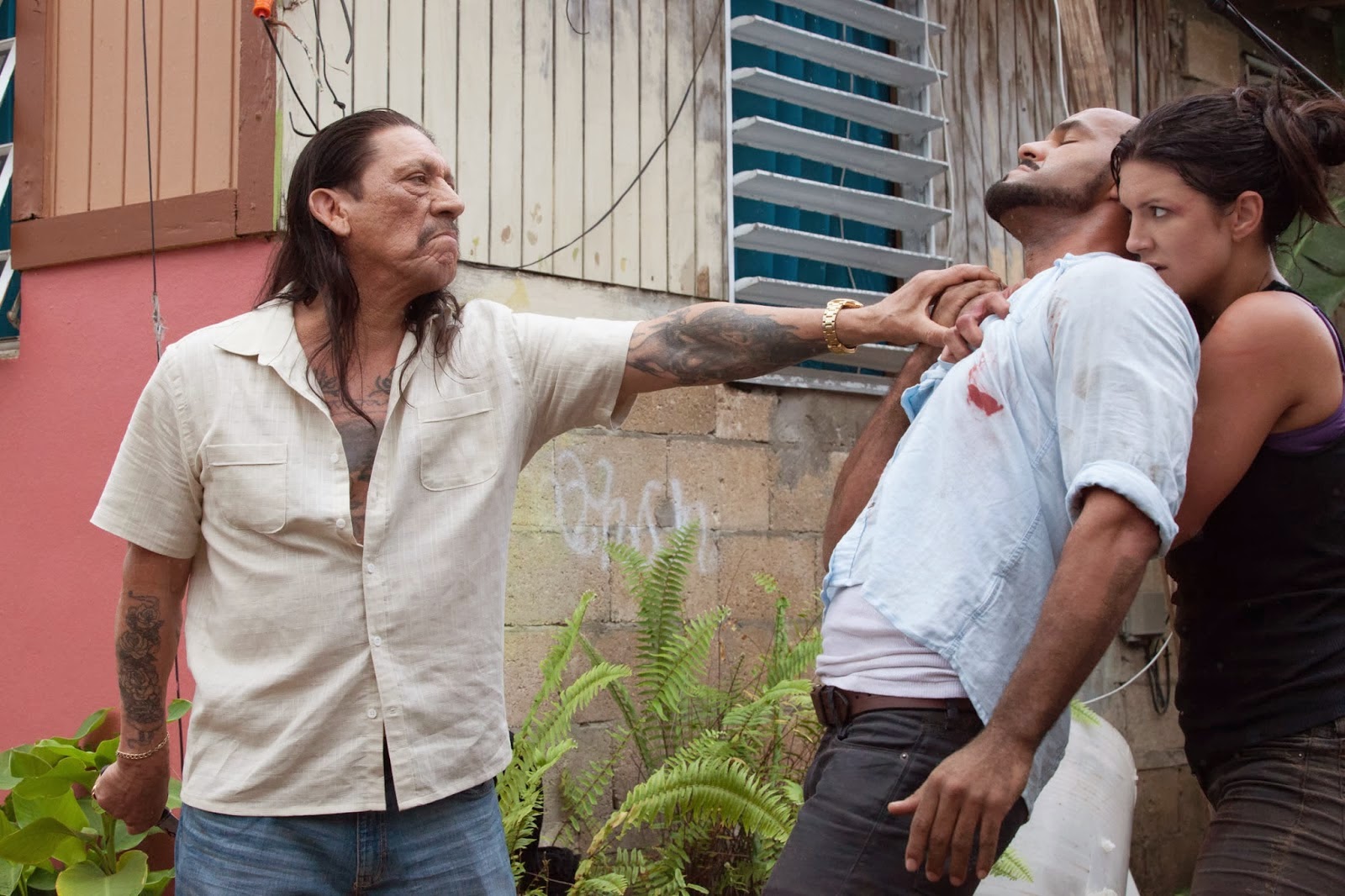 In the Blood is an important film in the evolution of Gina Carano as an action star. It's her first real time being responsible for carrying a film (Soderbergh was the real star of Haywire) and represents a make-it-or-break-it moment: her work in F&F6 was so lousy that another dreadful performance like that might have prematurely ended her career. She's still got a long way to go, but she's not bad in In the Blood (contrary to what you might have read otherwise; she has been savaged by the internet). She gets to smile and be glamorous, she gets to be intimidating and intense, she gets to fuck some people up. She's best at the latter, and watching her fight scenes made me wish she had been given more of them. Carano is not the problem with In the Blood. She's the best thing about it. It's the rest of the movie that lets her down.
Posted by Patrick Bromley at 12:04 PM