Riske Business: The Best of Ebertfest 2014 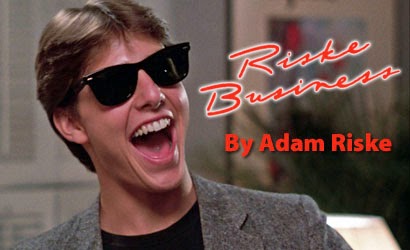 Last week I attended the 16th annual Ebertfest in Champaign, Illinois for the first time ever. Instead of an exhaustive account of the event, I’m bringing you my top 15 highlights followed by 7-word reviews of the 11 movies I saw -- plus my favorite quotes from the festival. 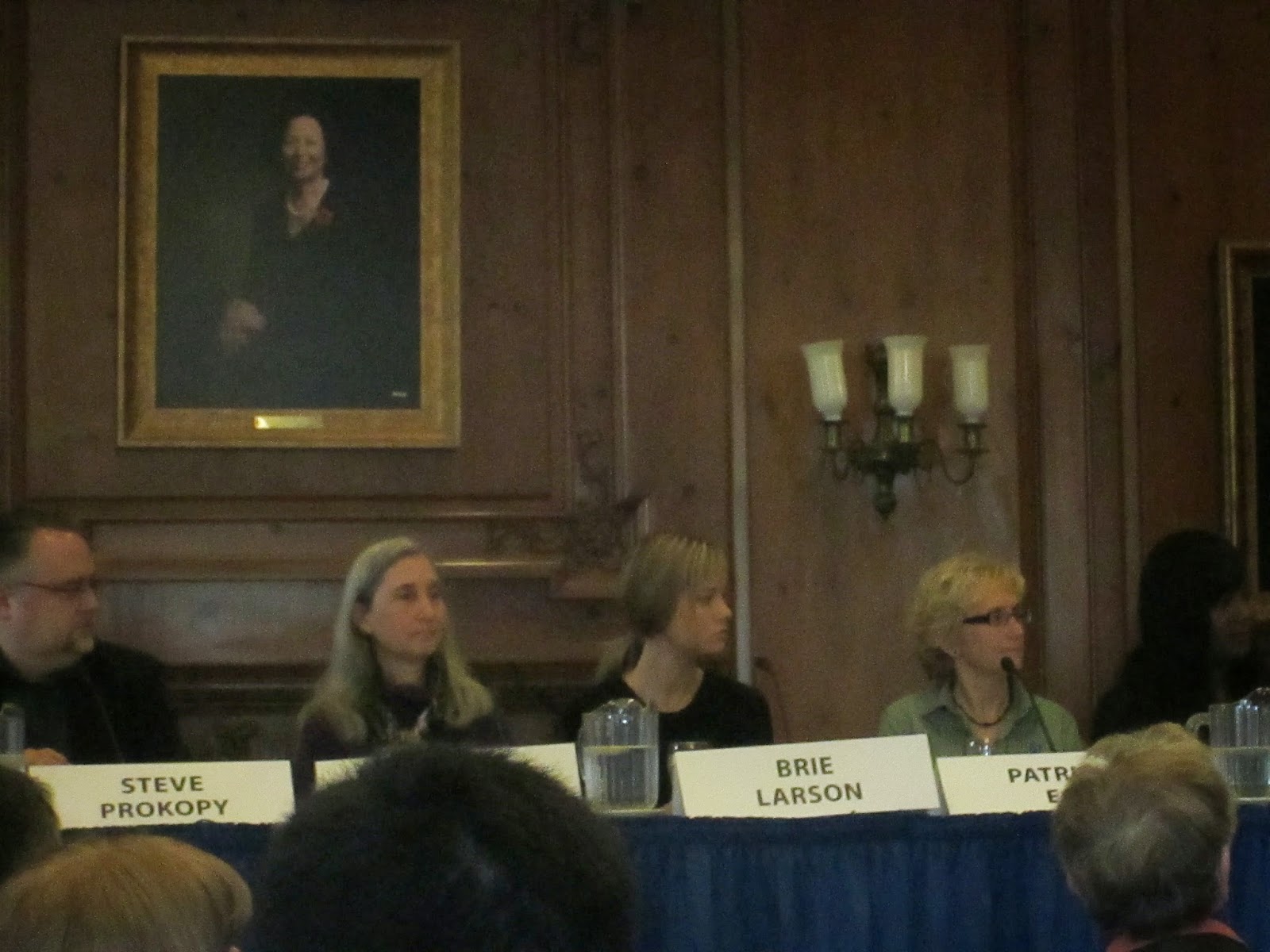 15. Brie Larson is super cute in person and also was intelligent and thoughtful in the Q&A and panels in which she took part. My favorite bit was when someone introduced her as being named the “it” girl of 2013 by the L.A. Times. She scrunched her face in embarrassment and shook her head "no," thus confirming that, like the Bruce Willis Face (BWF), there is a Brie Larson Face.

14. The festival had panel discussions that took place at the Illini Student Union on the University of Illinois campus, which meant I went back to college for a couple of days! It was so much fun. I want to take classes again! I also took a bunch of newspapers that were marked for students only because I wanted to read reviews of Brick Mansions. Adam hearts college. 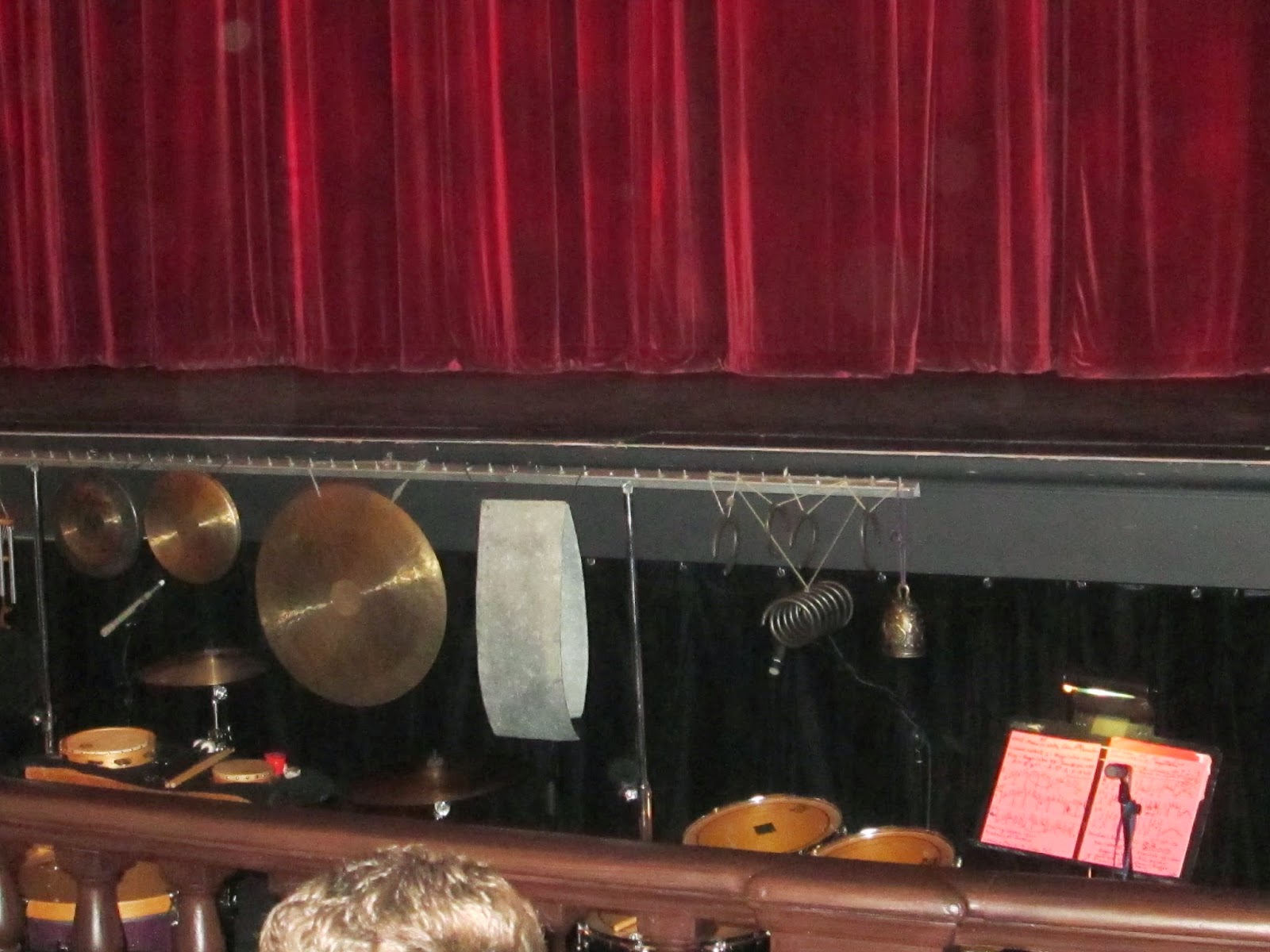 13. In JB’s Ebertfest report a few years back, he mentioned the wickedly talented Alloy Orchestra and yes, they are that good! This year, they played over the Lon Chaney silent feature He Who Gets Slapped, and I fully believe the movie worked as well as it did for me because of the live musical accompaniment. Striking imagery aside, the story in He Who Gets Slapped is so slight that it barely holds together an 80-minute movie. The Alloy’s plethora of sound included accordions, musical saws that sounded similar to Theremins, synthesizers and lots of drums. Very cool! 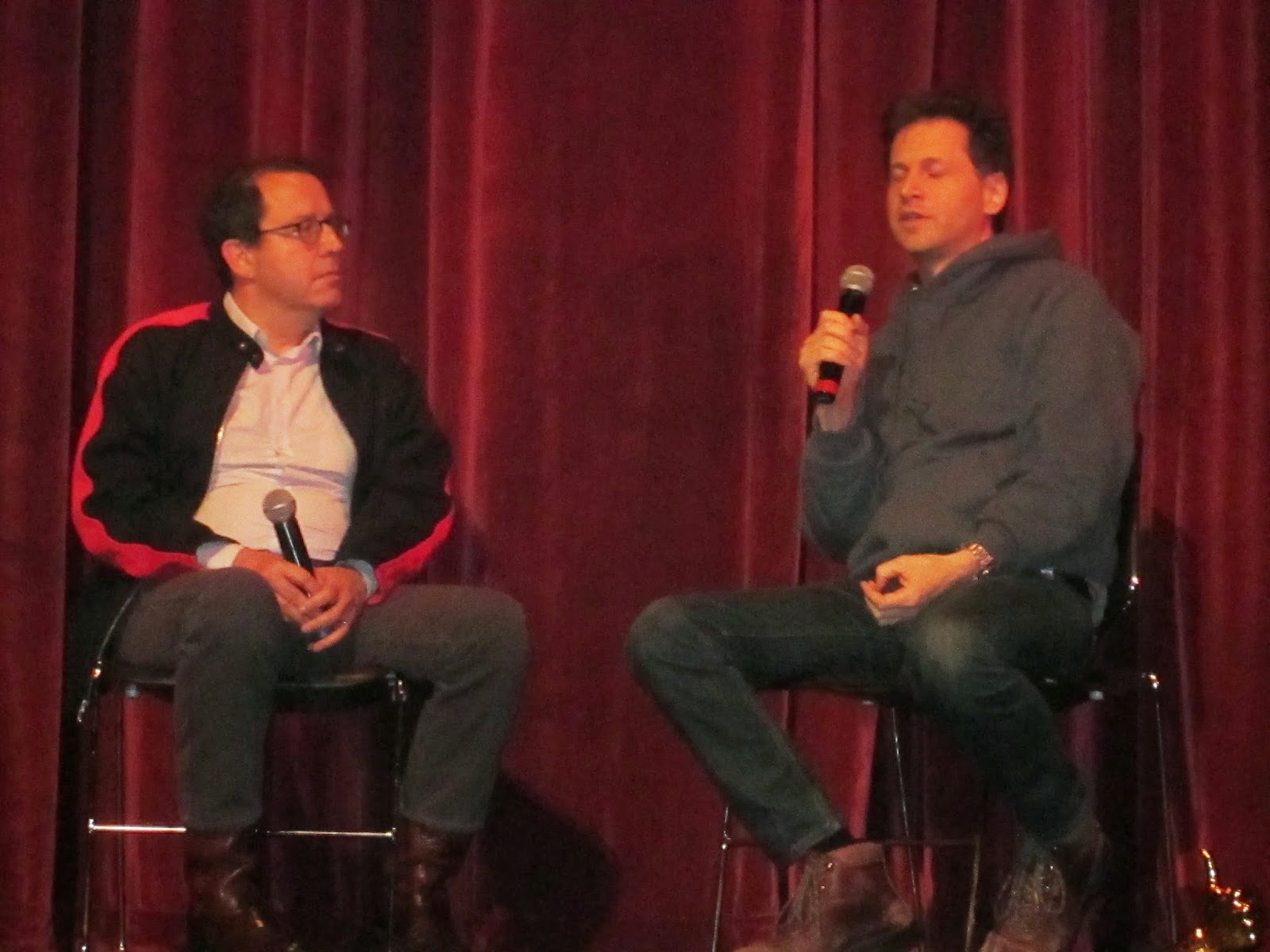 12. Bennett Miller (on the right), director of Capote and Moneyball, was a real snozberry. He’s a DIRECTOR in capital letters and don’t you forget it. He had some interesting stories, but yeah, he takes himself mucho seriouso. He spent most of the discussion talking about his late friend and colleague Phillip Seymour Hoffman who, though an acting genius, wasn’t getting the Capote role right away. Miller described how Hoffman was struggling with the voice and the character for the first two weeks of shooting and it clicked for him when he was able to start before the cameras rolled by improvising as Capote for 10 minutes prior to shooting the scene.

11. Steve James appeared for a Q&A after Life Itself -- a documentary about Roger Ebert’s life based on his memoirs -- and stated that he cast an actor (Stephen Stanton) to approximate Ebert’s voice to narrate large parts of the movie so to not pull people out of the experience. It truly works, as I never thought for a moment it was anyone other than Roger Ebert speaking even though I knew that was impossible. He also mentioned that Ebert threw himself into his blog in the later years because it was the only place where he still resembled his old self. 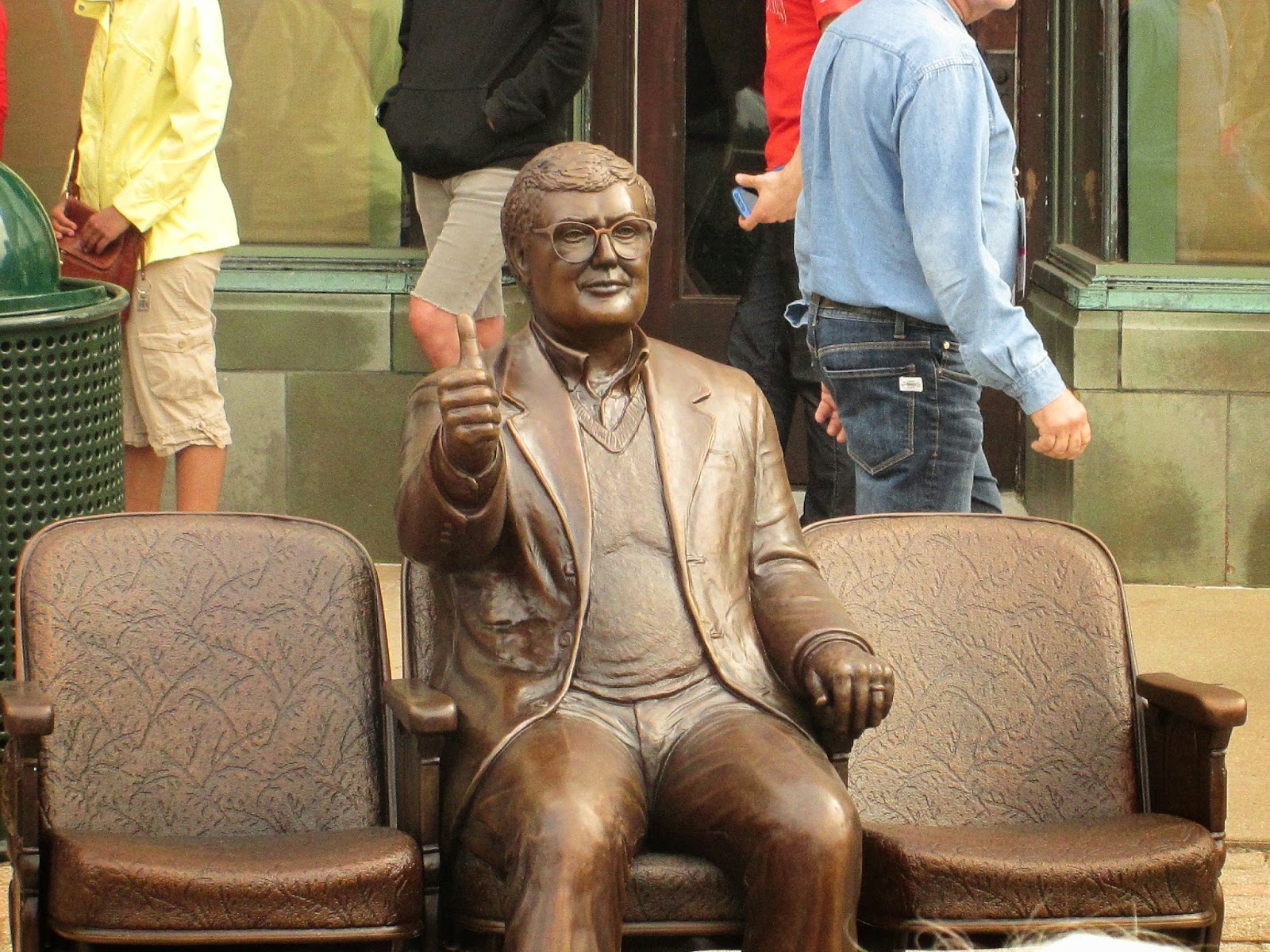 10. A statue of Roger Ebert was unveiled at the festival and placed in front of the theatre for photos. I took my first selfie with it. I’m not as attractive as Roger as it turns out. Oh well. 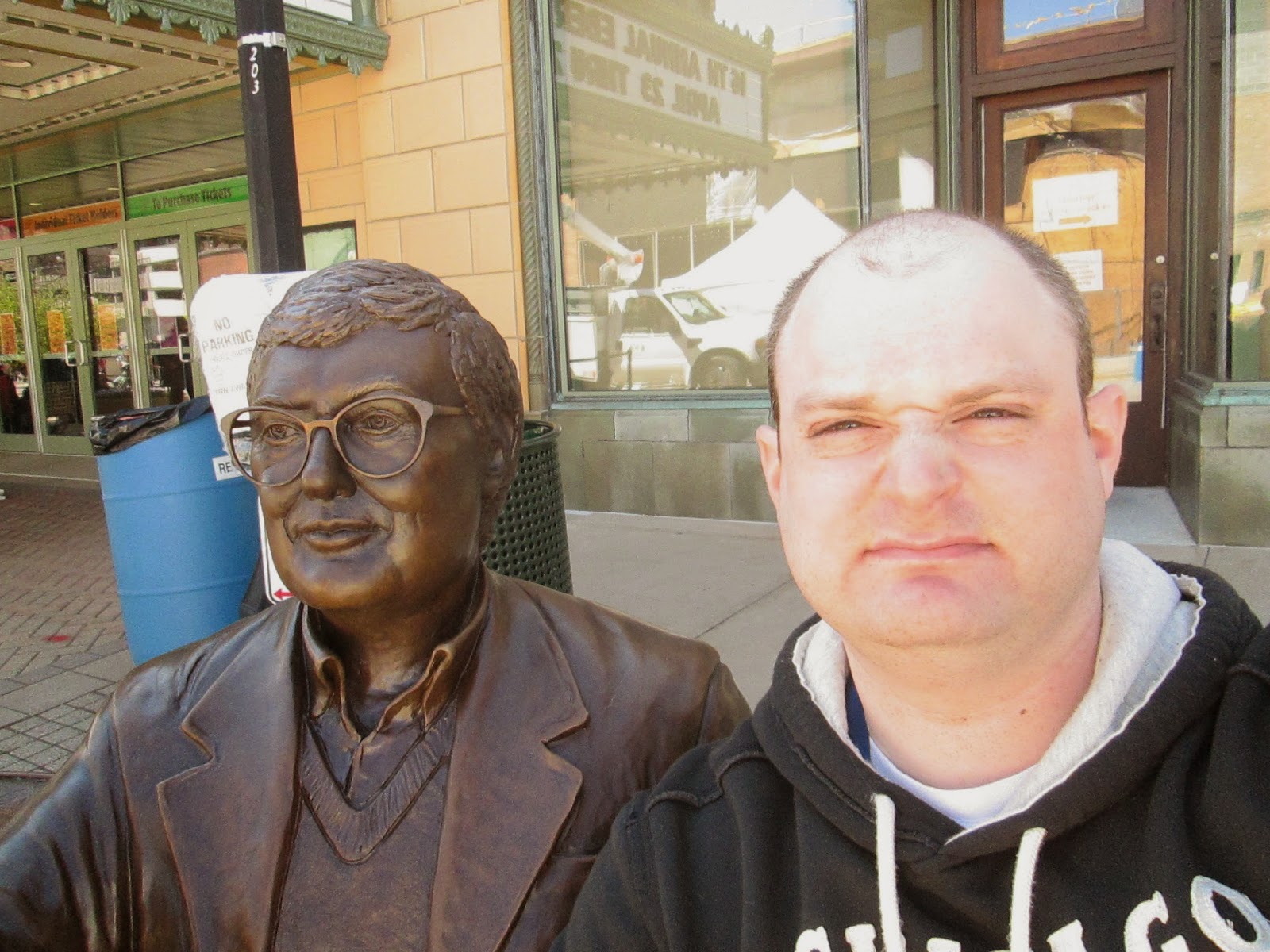 9. Patton Oswalt’s appearance at Ebertfest was the most lively and entertaining of all the post-movie discussions. He talked a good deal about Young Adult, comparing it to Five Easy Pieces (which I said pre-emptively in Netflix This Movie! YES!); he made fun of Wesley Snipes a couple of times in reference to Blade: Trinity, when the moderator of the Q&A said he looked identical to an Orc making a sword in a scene from Young Adult, Oswalt took her to task for about 10 minutes. It was hilarious.

8. Chaz Ebert did a great job as emcee of the festival despite being so overcome with emotion at times that she was nearly unable to speak. Chaz shared a number of amusing and interesting anecdotes, including that she and Gene Siskel’s widow have gotten into arguments over whose husband was more elegant, that the first movie that her and Roger watched together was Un Chien Andalou and that Roger described heaven to her one day when he was near death and said it was colorful and there was a “oneness” to everything -- meaning that the past, present and future all exist at once. I’m trying not to be facetious here because tact.

7. Keith Stanfield, who plays Marcus in Short Term 12, cursed A LOT in his Q&A. Even for me. I was convinced the mostly-AARP audience at the event was going to pass out. One of the highlights was his answer to when he was first influenced by film. He said it was when his mother let him watch Jason’s Lyric when he was 2 and he said “fuck you” to her when she confronted him about taking candy he wasn’t supposed to. He also mentioned that we should all help each other in society because we’re a “big ass fucking family, man.” The best part was that the Q&A was moderated by Nell Minnow, also known under the moniker of “The Movie Mom.” 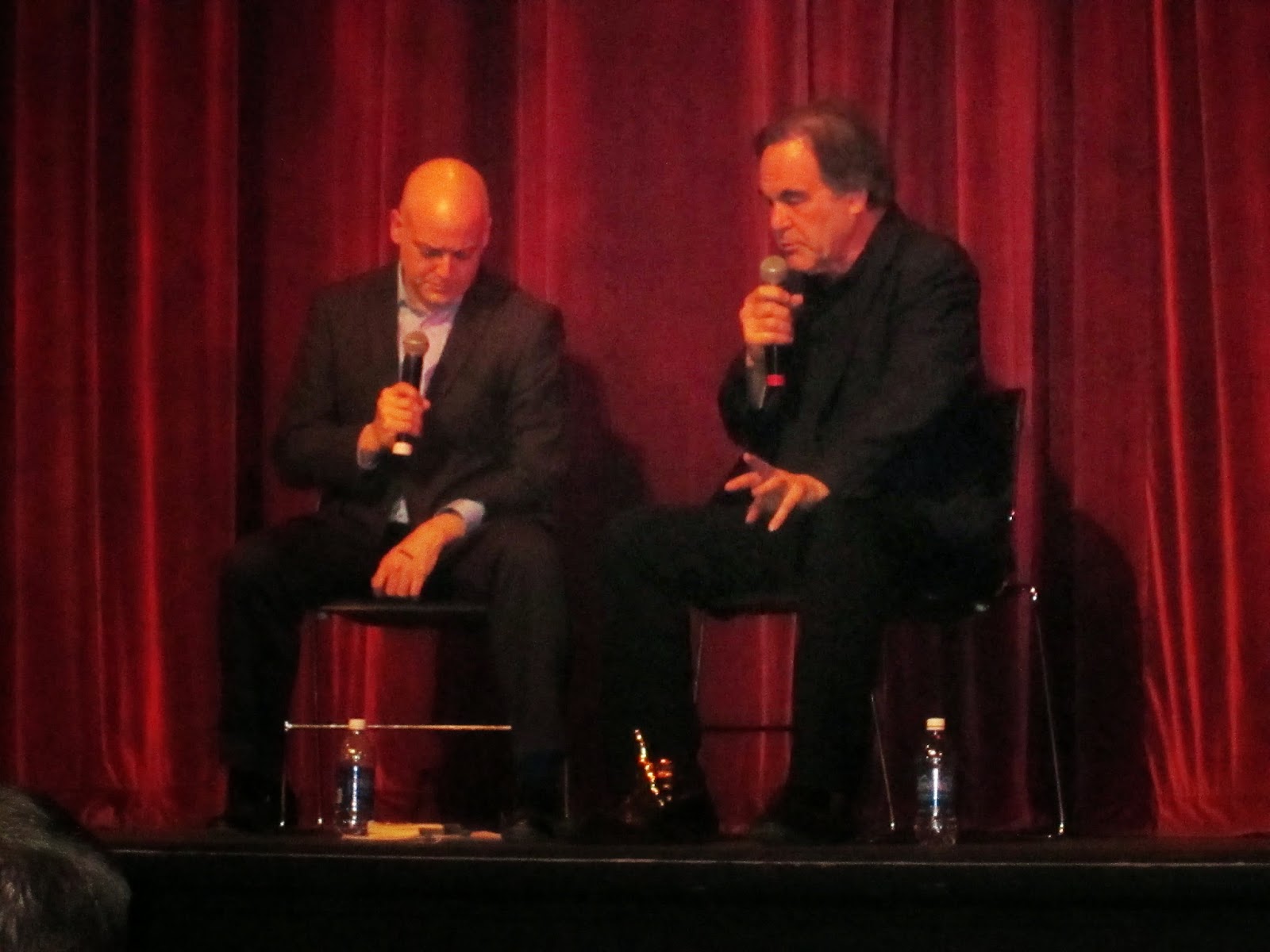 6. Oliver Stone is a great guest if you keep him on topic. He was definitely enlightening about Born on the 4th of July. He said watching the movie again made him feel angry and depressed and that we have learned nothing from Vietnam as a country. When it went off-topic though, OMG. He’s the worst. Imagine watching an episode of Meet the Press with someone who can’t stay on one topic for more than five seconds and only speaks in conspiracy. Even more troubling was that the audience seemed to be eating everything he said up. I admire Oliver Stone the filmmaker and sometimes his politics, BUT everything he says is not always 100% “the truth.”

5. I saw Do the Right Thing and Born on the 4th of July for the first time ever in a theater. Both looked amazing and were on film. While truly memorable, these were also bizarre experiences because I felt as if I was at the premiere of two 25 year old movies; it was like being in a time machine. I’ve never had a moviegoing experience anything like that before. Many people complained that Do the Right Thing was played too loud, which is ironic. RIP Radio Raheem! P.S.: Born on the 4th of July seemed even louder. This was the first time I watched Do the Right Thing and was taken aback by how comparable it feels to a 1960s musical. The movie is so full of style, emotion and commitment it wouldn’t be out of place if the characters broke into song. I mean that as a compliment if it’s not clear. 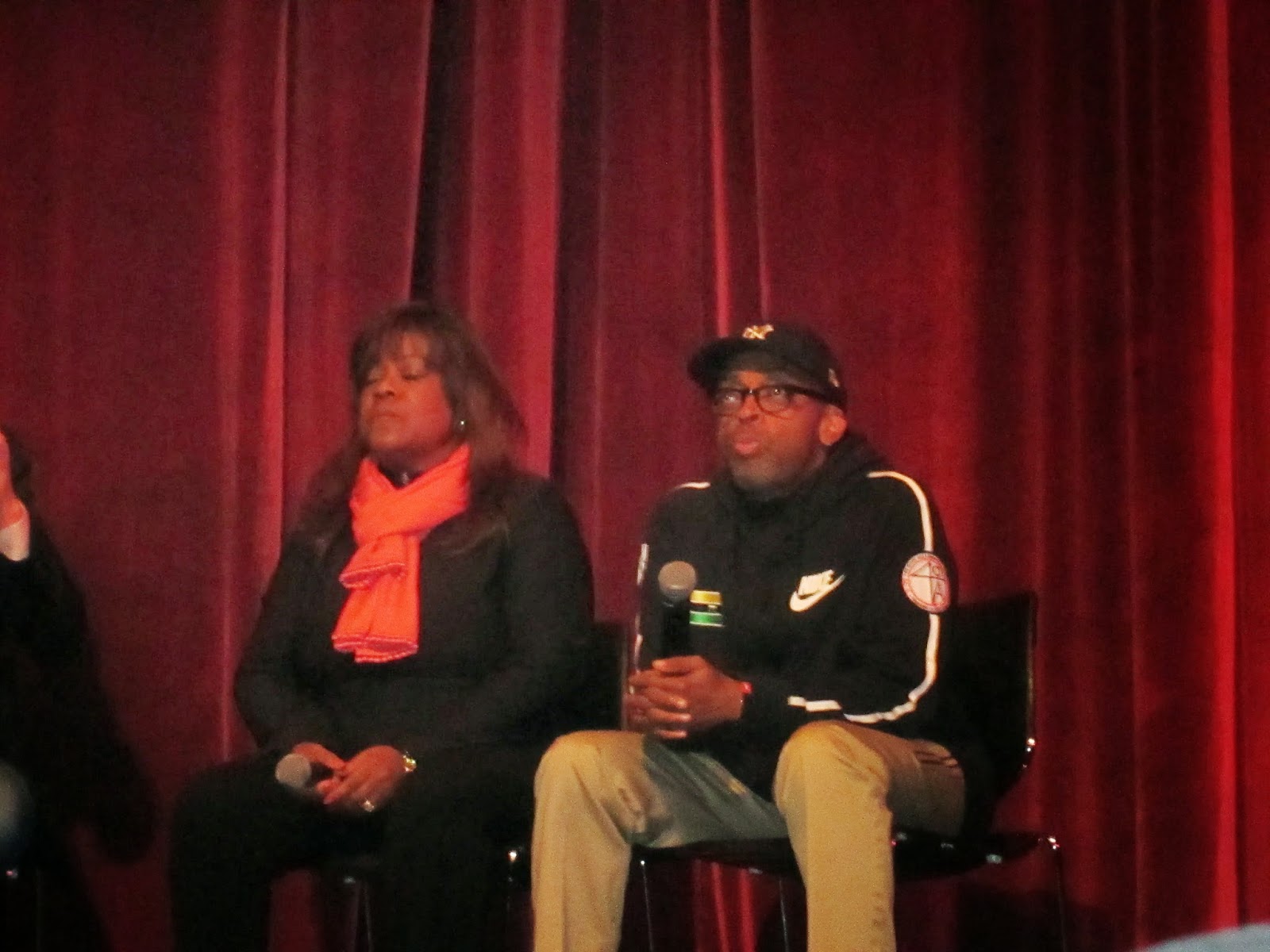 4. Spike Lee (with Chaz Ebert) was a great guest: friendly, but also savvy. He wasn’t “an angry guy.” I thought it was funny that he came out before the movie started to tell Bulls fans they can’t have Carmelo Anthony. He also always called the Best Picture winner of 1989 “mother fucking Driving Miss Daisy.” He went on to talk about how much better things were 20 years ago for a filmmaker like himself, because he knows Do the Right Thing or even Malcolm X would not be made by a studio today.

3. I met lots of nice people at Ebertfest. And some weird ones. I’ll tell you about those. Many people seemed interested in manufacturing moments. What I mean is that some people randomly got up and started ballroom dancing, a few would ask questions that weren’t questions but instead tearful confessions about themselves that they shouldn’t be sharing with strangers, etc. I talked to a woman who said she didn’t enjoy Do the Right Thing because she didn’t get “why they are so angry.” Nice. Another person was mad that Patton Oswalt and Charlize Theron don’t fall in love in Young Adult, which is kind of missing the point, right?  I also realized that if I had a movie equivalent, I would be Neil Page in Planes, Trains & Automobiles. That is because I sat next to my own personal Del Griffith. He was turning and talking to me before Young Adult and during the movie as well. Before the movie, he told me how he hated The Wolf of Wall Street because the guys had no spirituality. Um, isn’t that part of the point? After Young Adult he told me to “cut that shit out” when I started yawning because WE are GOING OUT FOR TEQUILA SHOTS LATER??????????? WTF???????

2. The Virginia Theatre might be the most beautiful theater I’ve ever seen a movie in. I also got to sit in the balcony to see a movie for the first time, which was wonderful. I would come back to Ebertfest just to go back to the Virginia. 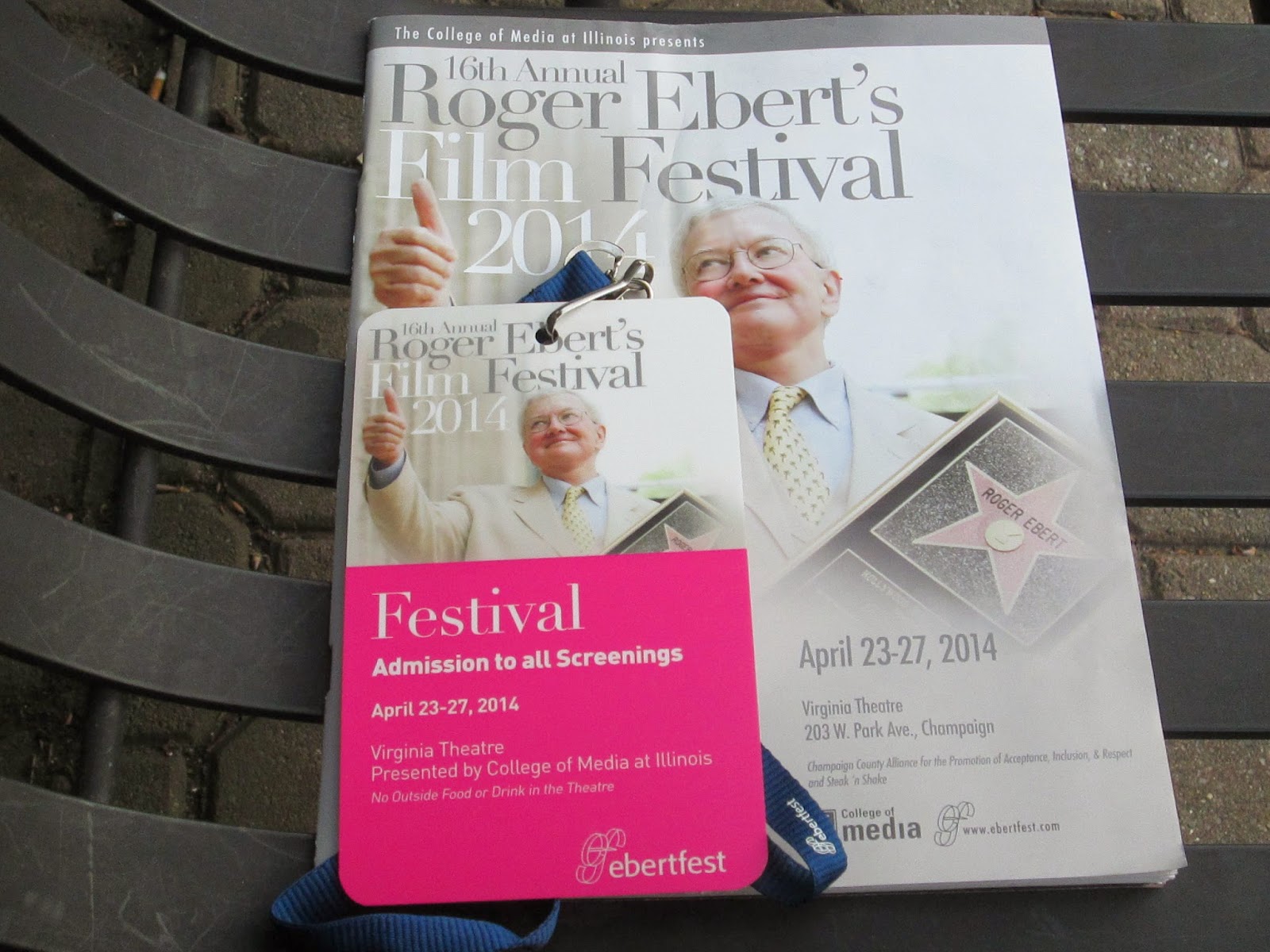 1. Roger Ebert’s presence loomed so large at the festival that it felt as if he was there the whole time despite his untimely passing last year. The feeling that Ebert was there is not surprising, because I feel like I knew him in a way since I spent so much time with his thoughts in writing. To this day I learn from Roger Ebert and Gene Siskel on how to be a better movie writer and reviewer. Bromley is better though. Yeah, I said it!

Ten of the 11 movies I saw at the festival are available to watch at home and were selected because they were deemed significant and/or overlooked. I ranked these in order of my favorite to least favorite:

Do the Right Thing – One of my favorite movies ever made.
Born on the 4th of July – Good movie with incredible John Williams score.
Young Adult – Beginning to enjoy this more and more.
Life Itself – A strong documentary about Roger Ebert’s life.
A Simple Life – My favorite undiscovered movie from the festival.
Capote – Still starts slow but then grows hypnotizing.
Museum Hours – Pretty interesting moody movie. Definitely worth watching.
Short Term 12 – The Brie Larson performance is the thing.
He Who Gets Slapped – Is it good without the Alloy Orchestra?
Goodbye Solo – Artsy-fartsy and pretentious nonsense. No mas.
Wadjda – Indie twee is also in Saudi Arabia.

In closing, here are some of my favorite quotes from the festival. I had a great time and recommend the event to every one of you. Let’s meet up next year! 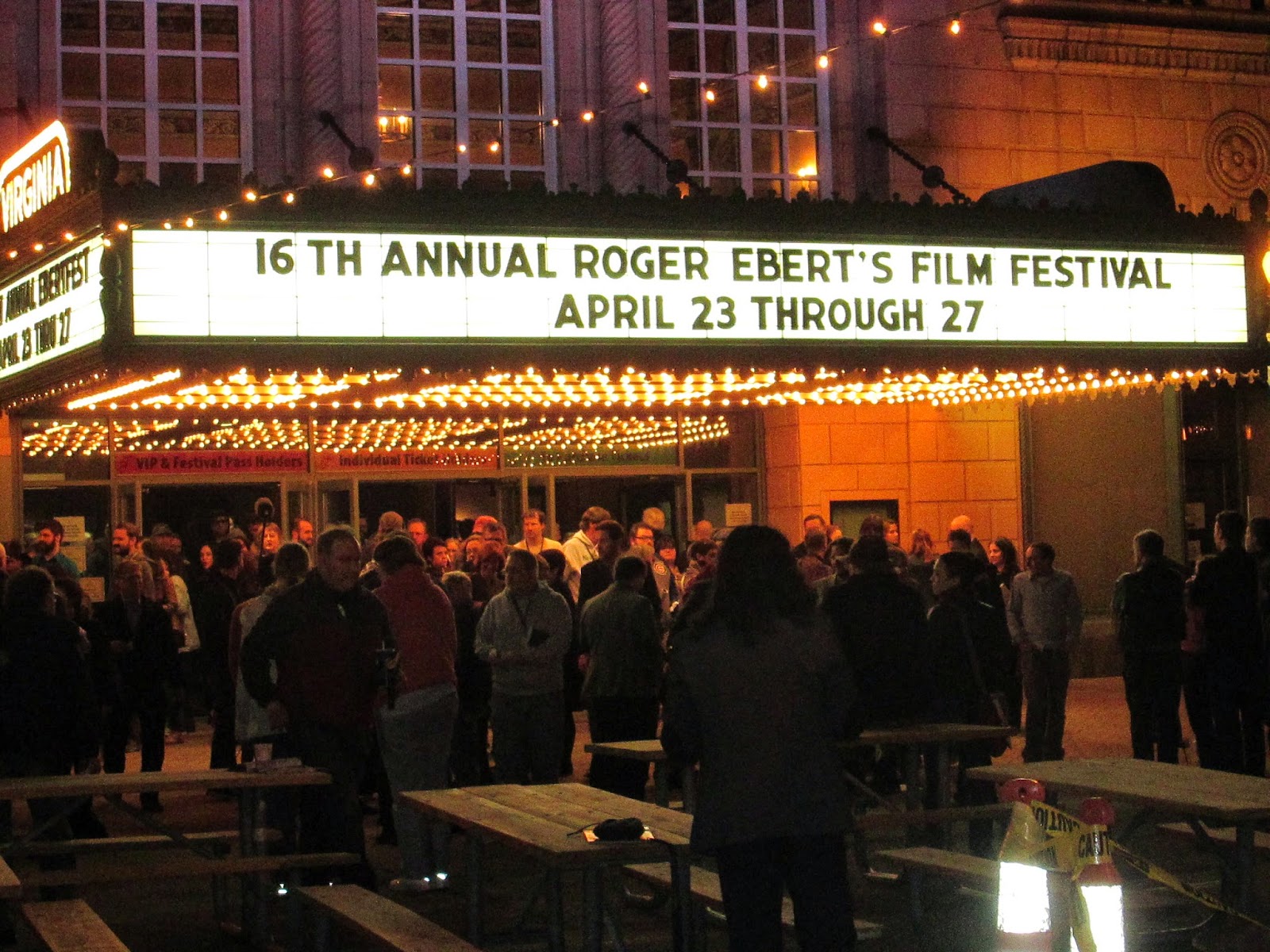 Posted by Patrick Bromley at 7:21 AM