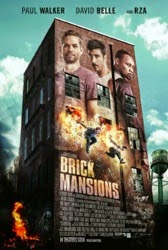 Brick Mansions, the remake of the 2004 French parkour-action film District B13, is just as forgettable as the original.

I went into the movie (which is co-produced and co-written by the ubiquitous Luc Besson) wanting to enjoy it. The trailer (the one with the cover of ‘Stand by Me’ by Ki: Theory) was gritty and emotional,  and I wanted to be a fan of the movie more than anything in tribute to Paul Walker, for whom my affection has grown through Running Scared and the Fast and the Furious franchise. When he died last November, it felt as if a player from my favorite sports team died. What a bummer.

But I still can’t recommend Brick Mansions. It’s boring and poorly shot, both problems that could have easily been fixed. I’m not expecting Brick Mansions to throw down a gauntlet, but I want it to have a style other than being dumb.

The plot in brief: In 2018 Detroit, the downtown area of the city is boarded off from the ghetto known as Brick Mansions. The projects are run by Tremaine (RZA), whom undercover cop Damien Collier (Paul Walker) believes gunned down his father. Damien is out for revenge. Meanwhile, Damien inherits an ally named Lino (David Belle), an ex-con who is also out to get Tremaine for kidnapping his girlfriend. At the same time, Tremaine has a rocket (a la The Rock) pointed at downtown Detroit and will annihilate millions if he doesn’t receive $30M (the amount for an over-the-hill Tigers outfielder) in his Hawaiian bank account (you read that right). 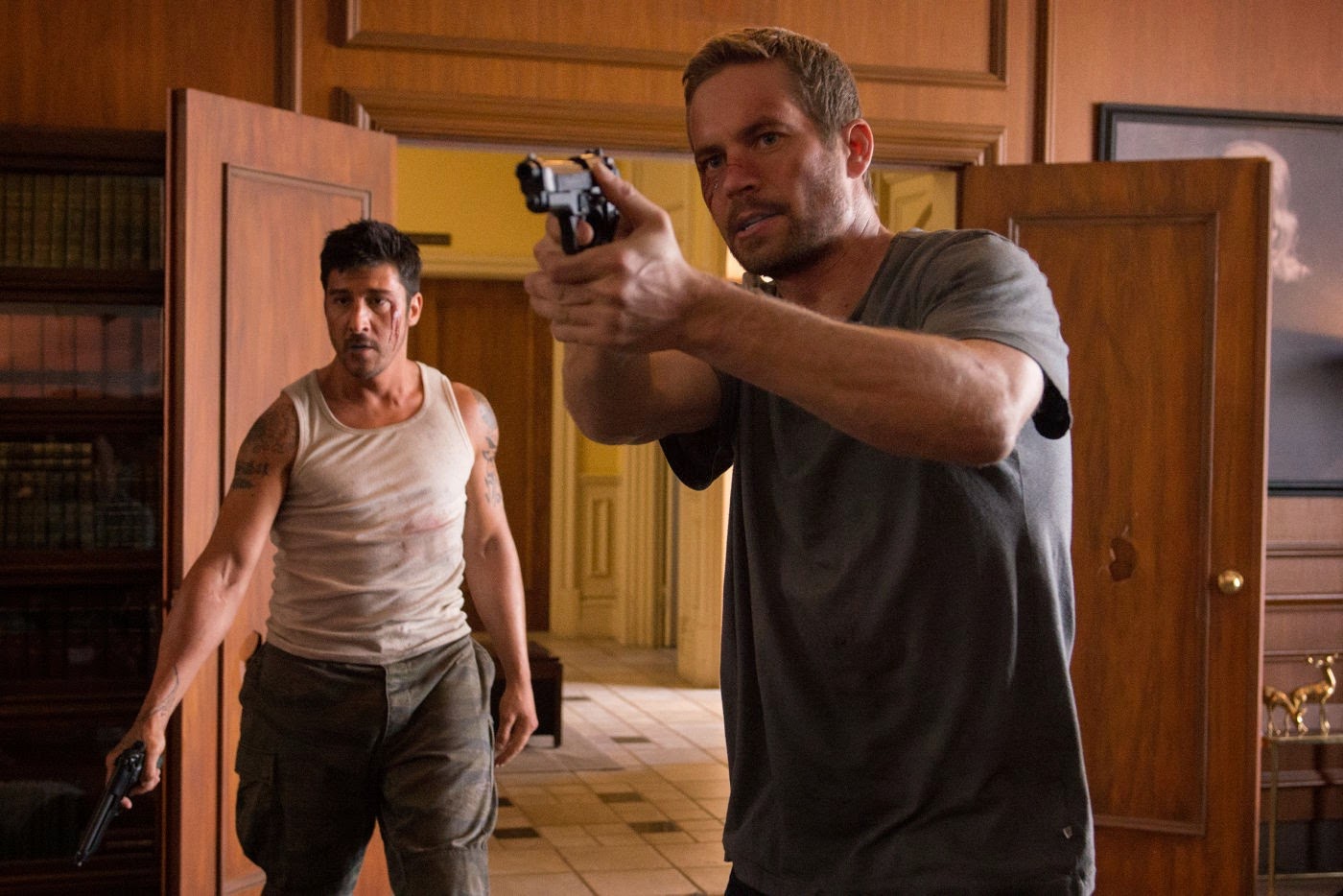 Brick Mansions takes way too long to get going. The first act has little to do with the last hour except for scene setting and character building that goes nowhere because everything is stock to begin with. It would have been better to begin the movie with Paul Walker getting briefed on the situation and diving us right into the central conflict. It’s bad storytelling. I also disliked how choppily edited the action was by director Camille Delamarre (who is directing the upcoming Transporter 4 and has edited many Besson productions of late, including Transporter 3, Columbiana, Lockout and Taken 2). There are so many cuts that you can’t enjoy the physicality of David Belle (leaving him with no assets); everything is moving so fast that you don’t get any appreciation for how fast he is. You need slow cars next to the fast car to know it’s a fast car, know what I mean? Even moments that should be suspenseful -- such as a rooftop jump to the window of another building -- are botched due to indifferent pacing and an odd shot selection. We live in a post-The Raid 2 world and many action movies are going to look shitty by comparison. This is the first one.

Many of the performances leave something to be desired as well. David Belle reprises his role from District B13, and let me just say that I am not a fan. We’ve see this flippy parkour shit before. Just because the guy is acrobatic doesn’t make him right to be an action star. He’d be better as a silent henchman. Paul Walker has to work overtime to give the two mismatched partners any chemistry, but Belle wouldn’t have chemistry with a fucking Bunsen burner. Also, can we just say RZA sucks as an actor? I’d rather be more diplomatic here, but that’s my immediate reaction. He’s not embarrassing, per se, but he’s definitely a void of interest. This type of movie needs a great villain and not some dude whose big move is to say “I’m a businessman” every five minutes or to try to sound Jamaican every once in a while for no apparent reason. 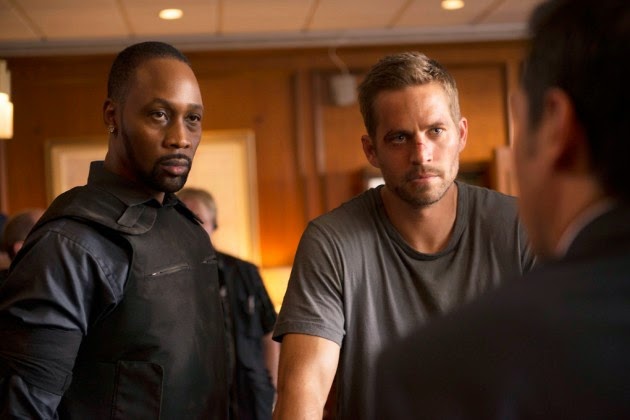 To be fair, there are some things I appreciated in Brick Mansions – it doesn’t totally suck brick. I appreciated that, despite a similar setting, the movie doesn’t re-hash what has already been done in The Raid: Redemption and Dredd. The movie has a feel of those '90s Hong Kong action movies (many of the thugs – including a cool female hench(wo)man feel straight from Rumble in the Bronx) where the hero is square and certain scenes are a little corny. In Brick Mansions, those are when Paul Walker’s character drops in for regular hang-outs with his grandpa. Sure, he’s a determined cop, but I appreciate that the filmmakers gave the character a little personality outside of his occupation.

Speaking of Paul Walker in this, his last completed performance, he proves once again that he’s a solid anchor for an action movie. He’s not the best fighter (heavy editing is used to make it look as if he can keep up with co-star David Belle), but he’s charismatic, appealing and clearly in on the joke, which is crucial for this type of movie. I also actually enjoyed the last five minutes of Brick Mansions, which turn unexpectedly sweet and even a little thoughtful (it clumsily is trying to comment on gentrification and is pro-ghetto despite saying its residents are all super dangerous at the beginning of the movie). The movie caps with a pleasant ‘in loving memory’ shout-out to Paul Walker as the song "The Man" by Aloe Blacc plays. Nice touch. 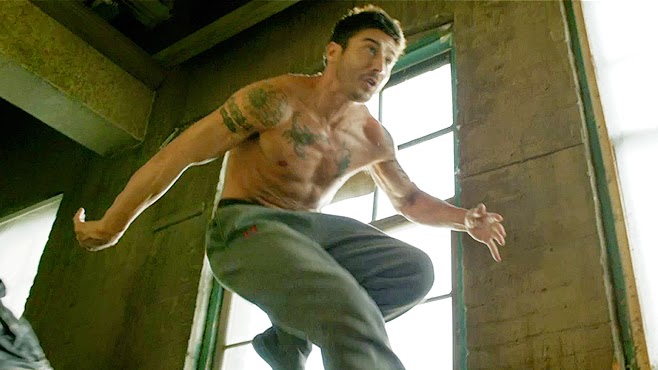 But alas, a nice touch here and there does not a good movie make. It just has the all-too-familiar feeling of watching a bad Luc Besson action movie. I am ok with mindlessness, but it has to be entertaining and Brick Mansions, in large part, is not.

Note: There are a couple of truly random moments in Brick Mansions. First, a minor character is named Tom Berringer, which is a reference that makes no sense in the context of this movie. Second, the rocket aimed at Detroit clearly has a Chicago Bears logo embossed on it. I get it. They’re in the same division, but what does that matter in the universe of Brick Mansions?
Posted by Patrick Bromley at 7:31 AM