Drunk on Foolish Pleasures: The Killing 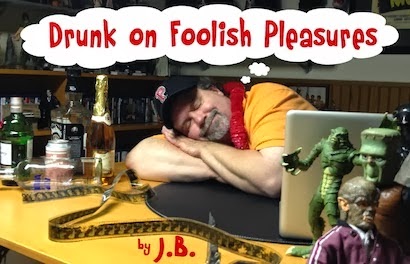 For the next few weeks, Dear Reader, I intend to take you on a grim and rain-glazed trip to the Big City after dark. We will become embroiled in crime, we will fall in love with the wrong dame, we will find ourselves in over our heads, and we will ultimately be destroyed by corruption, avarice, and our own blackest motivations.

It’ll be fun! Won’t you come along?

Critics disagree about the first film noir. Some claim it’s Stranger On the Third Floor, a little-seen RKO programmer from 1940, while others argue for John Huston’s The Maltese Falcon from 1941 or Billy Wilder’s Double Indemnity from 1944. We do know that film noir does not “take off” as a genre until after World War II, when a number of factors (competition from television, a growing disillusionment born of the war, and a willingness to tackle more realistic subjects) led to studios green-lighting darker material.

Film noir explores the seedy underbelly of the American Dream. Film noir presents characters that would have been unthinkable—even as villains—in American film as little as a decade earlier; yet in film noirs, these compromised, fatalistic men are often our heroes.

If musicals (which I explored in some previous columns) represent our ideal, the way we want the world to work and look, then film noir is the dark side of that ideal—the way we all secretly know the world really is.

The best documentary I have ever seen about the genre is included as a bonus feature in the box set The Film Noir Classic Collection, Vol. 3; it is called Film Noir: Bringing Darkness to Light. The documentary features interviews with Curtis Hanson, director of modern-era noir L.A. Confidential; Frank Miller, who was responsible for bringing a noir sensibility to Batman with his original graphic novels The Dark Knight Returns and Sin City; and Christopher Nolan, who knows a thing or two about noir himself. Film clips from dozens of noirs round out the package. If you’ve got an extra $45 laying around, get the whole box set; the doc alone is worth the price. If not, guess what? It’s on the YouTubes!

For the next few weeks, I will reach into my noir bag (not a euphemism) and discuss whichever film noir I pull out at random. First up? Stanly Kubrick’s 1956 film The Killing. 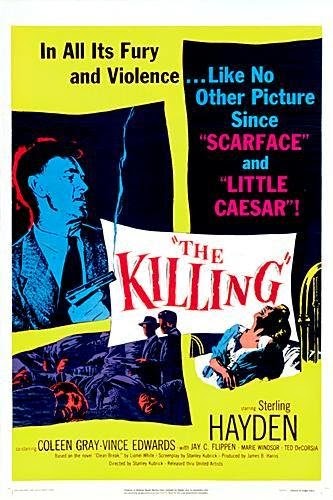 The Plot In Brief: Johnny Clay (Sterling Hayden), fresh out of prison, immediately begins to plan another heist. He reconnects with his girl Fay (Coleen Gray) and a mysterious man named Unger (Jay C. Flippen), who agrees to bankroll the job of robbing a racetrack. Clay devises a plan that depends on split-second timing for its success and enlists the aid of five other men, including: George Peatty (Elisha Cook Jr.), a betting window clerk; Randy Kennan (Ted de Corsia), a cop who’s in deep with a loan shark; Nikki Arcane (Timothy Carey), a gun enthusiast and sharp-shooter; and Mike O’Reilly (Joe Sawyer), a racetrack bartender. The robbery looks like it will go off without a hitch, but insecure George makes the mistake of telling his wife Sherry (Marie Windsor) about it. She talks her lover Val Cannon (Vince Edwards) into stealing the money from Clay’s crew after the robbery. Things only go downhill from there.

The Killing is what we here at F This Movie! like to call a perfect film: the perfect cast, the perfect script, perfect dialogue, perfect performances, and perfect direction. Critics certainly have differing opinions on Kubrick, but one thing they all agree on is that The Killing is a masterpiece. Kubrick was only 27 when he made it; that really puts all of our lives into perspective, and not in a good way. 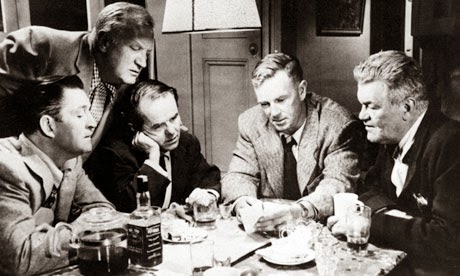 The Killing serves as a wonderful entrée into the world of the genre itself. We see desperate men; whiskey-soaked meetings in dark, smoky rooms; a doomed man and a doomed plan (Doomed Panama!); an unfaithful, duplicitous wife; and an over-arching sense that, no matter what the characters do, their fates have been decided long before. Film noir might just be the “Greek tragedies” of the mid-twentieth century.

One offhand rule of thumb I have learned when negotiating the twisted, dark corridors of film noir is that if Marie Windsor is in the cast, then that movie is definitely film noir, and usually great film noir. Marie Windsor starred in dozens of these films and almost always played the “femme fatale.” The stock character trope of the femme fatale is essential to our understanding of noir. She is a seductive, dangerous bitch who christens the dumpster you’ll wind up sleeping beside for the rest of your days, using the imported champagne that you bought her with borrowed money.

As my wife used to say, “Chicks is poison.” 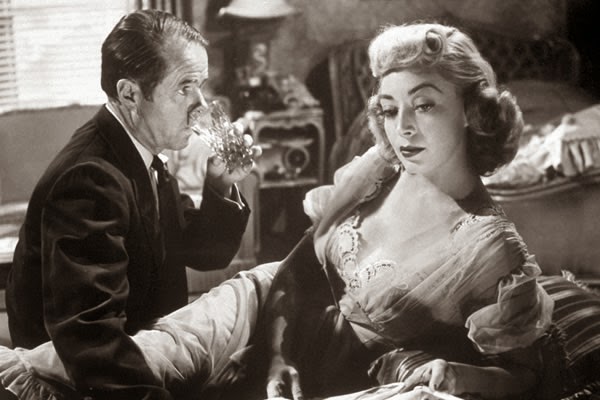 I do not wish to spoil it, but The Killing has a final line of dialogue that ranks right up there on any list of Famous Final Lines. I would even nominate it for the Top Ten, along with Some Like It Hot, Casablanca, and Gone With The Wind. The temptation is strong, gentle reader, but I will not spoil it here.

I have only recently begun to explore this genre (and its compelling blend of the great and awful), and one element of noir I have grown to love is its focus on the poor. This demographic gets short shrift in American films, being relegated to the “poor but proud” sidelines or written out of our film heritage altogether. Film noir explores poverty with a keen eye and sense of social justice. One cannot run from the conclusion that many noir films reach: the poor are driven to questionable acts by poverty and hunger; often, the poor are only getting their hands dirty at the behest of, and in the employment of, the very rich. In this sense, these films work as dirtied “social problem” films as well. 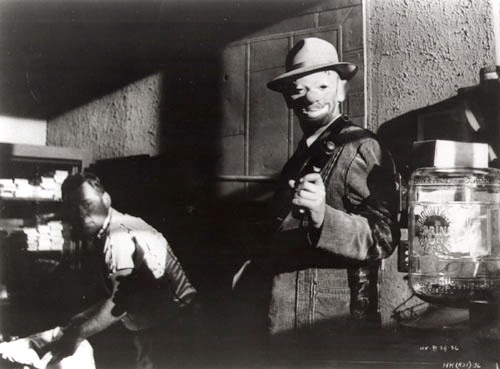 Our journey over the next few weeks (five, six, maybe even seventeen?) will be a grim and relentless one, but I hope you won’t go yellow. Then I would be forced to drop a dime on your whole miserable crew. And no one wants that…

F-Heads: what are your favorite movie last lines? Post them below. I think you can tell what I have here in my pocket, and I ain’t afraid of using it!
Posted by Patrick Bromley at 11:47 AM