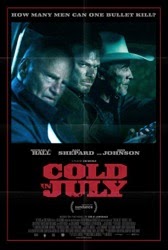 This really is a great year for genre movies.

Jim Mickle keeps getting better as a filmmaker. Though his 2006 debut Mulberry Street remains unseen by me, his last two movies, 2010's Stake Land and last year's We Are What We Are, have shown tremendous growth; while his movies have always been impressively directed, they continue to get better as actual movies. His latest, Cold in July, is his best movie yet. Unlike his previous efforts, it is not a horror film. Instead, it's a crime thriller, a contemporary noir, a revenge movie, a drama about fathers and sons. It's a cool little movie.

For his first non-horror outing, Mickle and writing partner Nick Damici have adapted the novel of the same name by Joe R. Lansdale about a man named Richard Dane (Michael C. Hall) who kills an intruder late one night only to have the dead intruder's father, a recently-paroled criminal named Ben Russell (Sam Shepard), begin to terrorize his family.

And that's just the beginning. 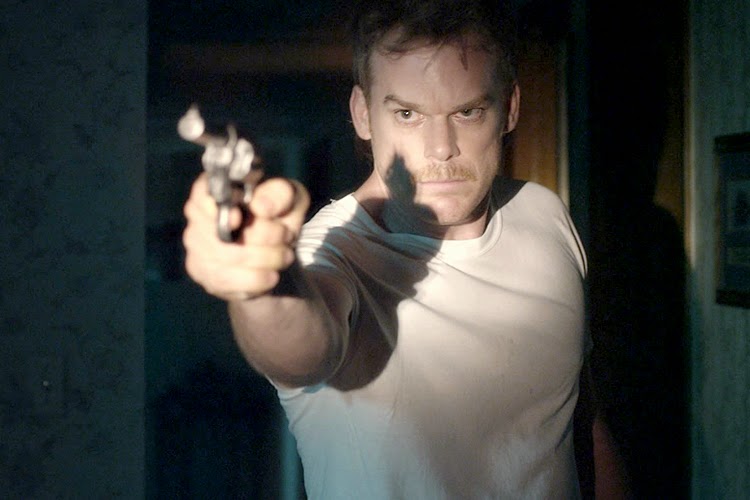 I don't want to say much more about the movie's plot except that what I've described covers only about 30 minutes of the movie's nearly two-hour runtime. Where it ends is completely different than where it begins, and yet not -- Mickle and Damici's screenplay goes down totally unexpected paths while still managing to bring things full circle. But knowing less is preferable in this case, as the film never quite goes in the direction one is expect; it's not a movie full of twists, necessarily, but one which rarely follows the path we've come to expect from years of familiar formulas. Though it might eventually settle into plot we recognize, you have to at least give Mickle and Damici credit for the way it gets there.

While an argument could be made that the movie be shorter -- at nearly two hours, it sags a bit in the middle -- I love how economical much of Mickle's storytelling is. A lesser movie would have spent 20 minutes establishing Dane as a character: where he works, who his family is, what he has to lose should things ever go wrong. Instead, Cold in July jumps right to the break in and shooting, not just because it gets the plot moving straight away but also because it immediately establishes Dane as a character. He is a frightened man and a reactive character, but not a pussy. In fact, he may be too quick to act without considering the consequences -- not so much in defending his home (though a case is there), but in much of what he does in the aftermath. Cold in July concerns itself very much with masculinity, offering differing kinds of men navigating the same world and colliding with one another. Dane is the least "manly" in the old-world, stereotypical sense. He is fearful and unsure. He's also the best version of a man the movie has. 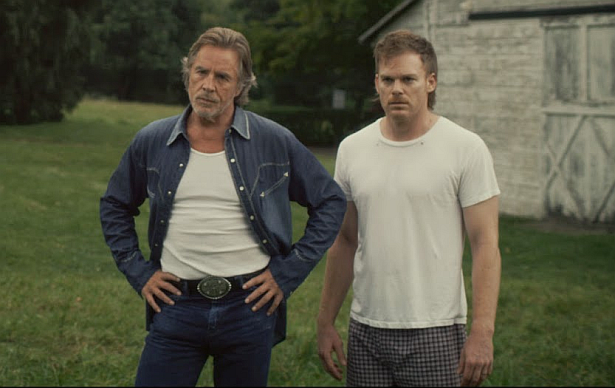 The above plot synopsis also makes no mention of the character Jim Bob, played by Don Johnson in yet another wonderful character turn. What a great third act his career is getting; after his sockless, pastel megastar days in the 1980s, Johnson was in limbo for a long time before being reinvented as one of the most dependable and cool character actors in the last five years. He even avoided embarrassing himself in Bucky Larson: Born to Be a Star, one of the worst studio films of the 2000s. From Machete to Django Unchained to this year's The Other Woman to now Cold in July, Johnson is stealing every movie in which he appears. Sonny Crockett is money in the bank.

As evidenced by the fake "folds" in the film's official poster art, Mickle has very consciously made an old-school genre movie -- one that's steeped in the traditions of '70s revenge movies but wrapped in an '80s aesthetic. From Hall's mullet to the neon-soaked lighting to the awesome synthesizer score to the now too-frequent use of the John Carpenter font (it's the third movie I've seen in a few months to use it), there are air quotes around much of Cold in July. It might be all too easy to accuse the movie of being an exercise in style, but that would be denying the substance that lurks beneath. For all its retro-cool concerns, the film is still about real things and goes to some dark, dark places for more than just the sake of darkness. 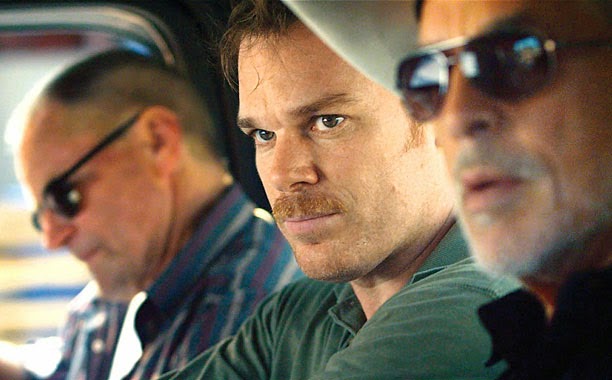 I've liked every one of Jim Mickle's films that I've seen in varying degrees, and, at only age 35, he still has a lot of films to make. I look forward to seeing them all, because he's a guy who's poised to make a masterpiece. I still don't think he has made an indisputably "great" movie, but his every effort inches closer and closer. Cold in July comes closest.

Cold in July is currently in limited release and on VOD.
Posted by Patrick Bromley at 7:33 AM