Christopher Lambert is turning Japanese. I really think so.

Junesploitation is just days away! While not necessarily a full-blown exploitation film, the movie I’m writing about this week makes a good stepping stone toward the greatness that is headed our way for 30 awesome days starting June 1st.

The Hunted from 1995 (not to be confused with the 2003 Benecio Del Toro/Tommy Lee Jones movie of the same name) is the kind of project that a Highlander apologist or a fan of classic ‘80s and ‘90s action cinema instantly warms to. It’s silly, violent, and pits samurai against ninjas. Sounds awesome, right? 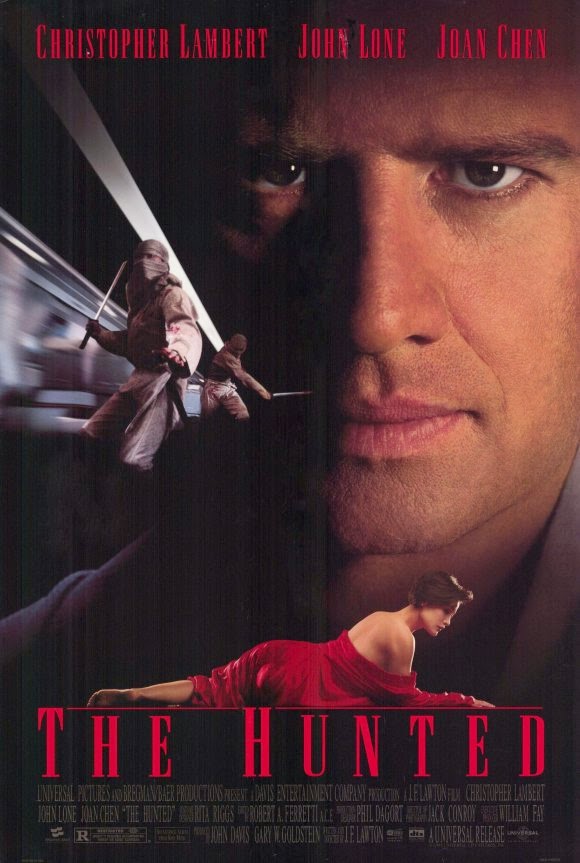 Christopher Lambert, doing the same thing he does in every single movie he makes, stars here as Paul Racine, a computer chip salesman. You know how he does: eyes half closed and mouth slightly curved into the world’s subtlest grin, as if he knows an awesome secret but is too cool to tell anyone. When he laughs it sounds like dry leaves on a cobblestone street: “Heh heh heh.”

Racine is in Japan on a business trip peddling said computer chips when he meets Kirina, played by Joan Chen, (Twin Peaks: Fire Walk With Me, Judge Dredd) with whom he ends up having a one night stand. As he’s leaving the woman’s hotel room he realizes he took the wrong key and good-naturedly (“heh heh heh”) goes back to her room to get HIS key. He arrives just in time to see Kirina having her head cut off by a ninja named Kinjo (John Lone, The Shadow). Kinjo isn’t wearing his mask and, realizing that his face has been seen, slashes Lambert’s throat (because he wants his Quickening?) leaving a wound that should be mortal.

Lambert knows that he’s in serious danger and goes to the cops but they can’t offer much help because Kinjo can find anyone, anywhere (he’s a ninja). Lambert is then sought out by a dark looking dude called Takeda (the excellent Yoshio Harada), who is the latest in a long line of samurai, sworn to fight men like Kinjo and his fellow criminals. Lambert has to arm himself with as many sweet moves as he can master in a short time and face off against the ninja and the yakuza that command them in one last battle that will settle the score once and for all.

For honor. For love. For a free trip to Japan. 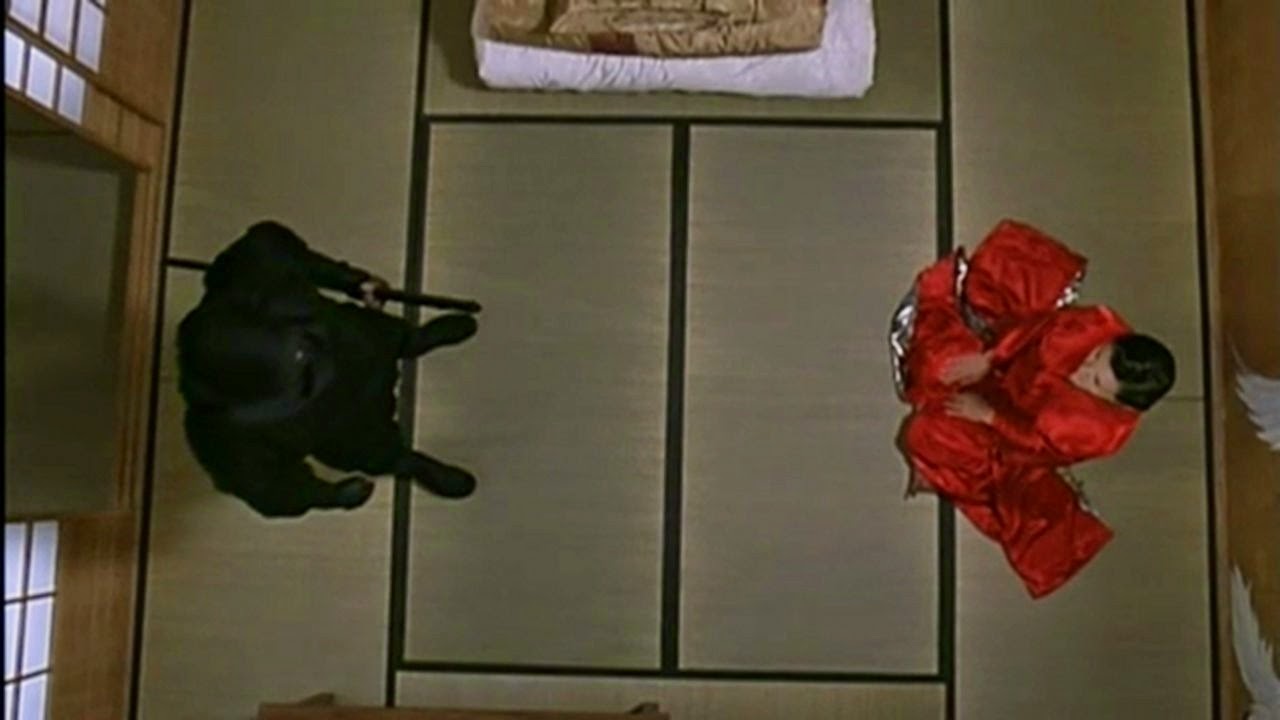 I have little doubt that The Hunted was ever intended to be anything more than a Highlander knock-off and an excuse to get a katana back into the hands of Lambert. He even wears a trench coat that looks exactly like the one in the Highlander films. And while the movie asks an awful lot of you (like believing a geeky gaijin could take on ninjas) the movie is more fun that it has any right to be.

And I’ll admit that I’m also being a little glib. Lambert is never exactly pitted against an entire army of ninja, but rather spends most of the movie on the defensive, running for his life and trying to stay one step ahead of the people that are after him. You see, he is…The Hunted.

This attempt to escape the inevitable (ninjas are always inevitable) leads to one of the coolest set pieces in this movie, which is an epic battle aboard a bullet train. The violence moves from car to car and leaves bloody corpses behind. It’s exciting and has become something that’s stuck with me for years. You don’t forget a ninja/samurai fight on a speeding train.

The thing that impresses me the most about this movie is that in a film filled with ninjas and samurai and a French guy playing an American guy in Japan, it neither descends into camp nor does it take itself too seriously. It walks the line in a way that satisfies, even if it does this in a way that is now admittedly out of fashion. This is a movie that wants to have fun with its subject but knows that it has to establish a believable world and stakes we care about in order to do so. 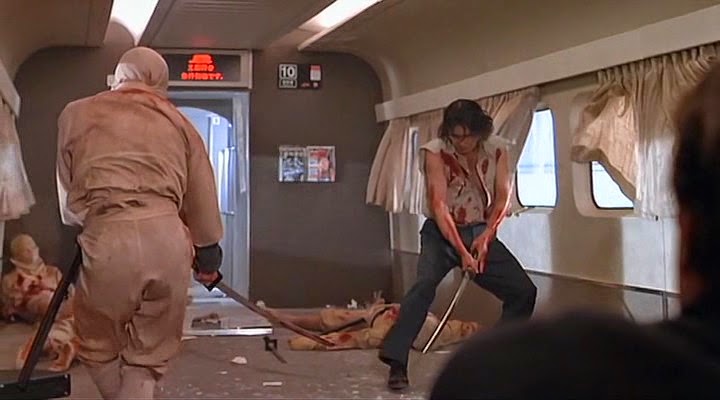 This is all the fruit of a writer/director named J. F. Lawton. You’d be forgiven for not knowing who that is; Lawton made an exploitation film in the late ‘80s called Cannibal Women in the Avocado Jungle of Death and later a Bill Maher vehicle in 1991 called Pizza Man. However, if you aren’t familiar with either of those movies then maybe you’d recognize him as the writer of Pretty Woman and Under Siege. I fully believe The Hunted really suffered from not being marketed as being “from the creative mind that brought you Pretty Woman and Under Siege.” 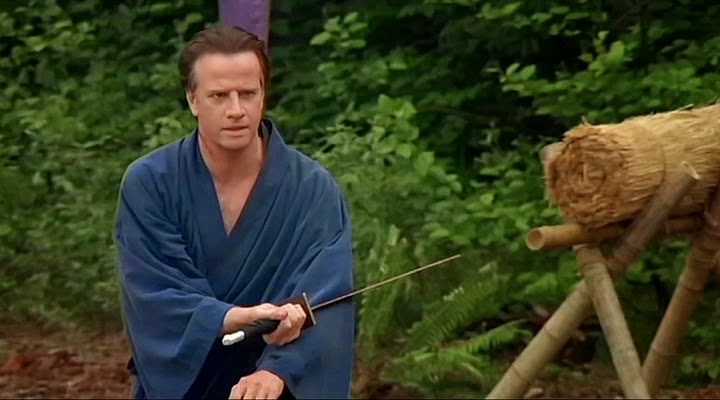 Ultimately The Hunted is decidedly NOT the greatest ninja vs. samurai movie in the world, but I’ve always thought it was a lot of fun and was one of the only mainstream American movies to feature ninjas and samurais in the dark years between American Ninja and Kill Bill. Now we seem to be in a ninja renaissance, and maybe The Hunted had something to do with that.

Okay, The Hunted probably had NOTHING to do with that, but check it out and see for yourself. It’s on Netflix Instant and is a perfect lead-in to 30 days of exploitation.

Heh heh heh.
Posted by Patrick Bromley at 11:55 AM