It Came from the '80s: Spacehunter: Adventures in the Forbidden Zone 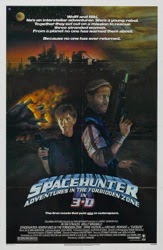 It's Sci-fi day for Junesploitation, a perfect day for It Came from the '80s to look back at Spacehunter: Adventures in the Forbidden Zone, one of the many 3-D genre films released in 1983.

Here's something you already knew: Star Wars changed the world. We mostly credit it (along with Jaws) for ushering in the age of the blockbuster, destroying the auteur-driven character cinema of the 1970s in the process. What is rarely talked about is the movie's influence on the next decade of genre films, which flooded theaters, home video and cable TV with bad imitations of Lucas' classic. So many of the sci-fi films that popped up in the wake of Star Wars seemed to operate under the idea that the movie succeeded because it had spaceships and laser guns, not because Lucas was drawing from a number of influences and sources for which we already had affection whether we realized it or not. His movie works because he essentially retold Joseph Campbell's monomyth but updated the setting. 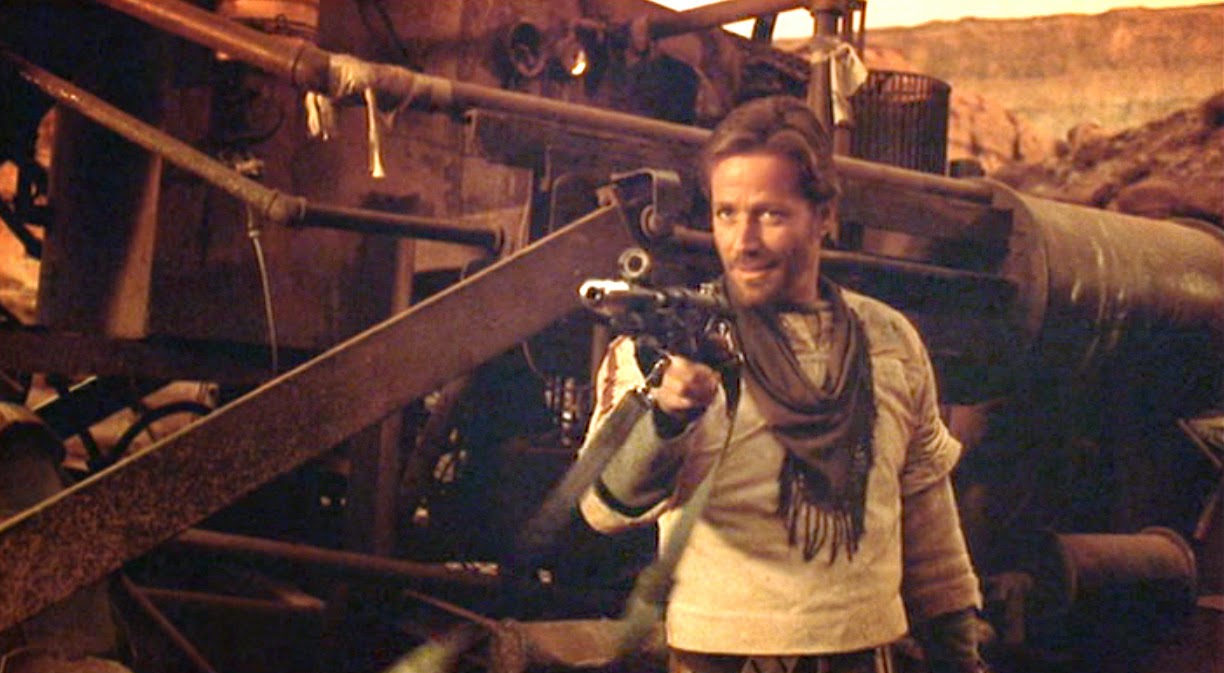 The glut of imitators fail to recognize the importance of classical storytelling -- they are all signifiers, no signs. They tend to be shapeless and dull, capturing the imaginations of kids and '80s nerds with cool costumes, production design and a nice looking poster. In short, they are exploitation movies.

But that doesn't mean they don't have their own rewards, especially for those of us who often prefer cheap genre fare to lavishly expensive Hollywood productions. The whole point of It Came from the '80s is to look at the kinds of genre movies that wouldn't (or couldn't) have been released in any other decade, and a lot of these knock-offs find ways to be weird or interesting in ways that "safer" movies can't. Even when they aren't very good -- and I'm still not sure Spacehunter is very good -- they're worth talking about.

A ship carrying three women crashes on a diseased planet and the passengers are immediately captured by Zoners, a band of marauders who live in the Forbidden Zone and are ruled by the villainous Overdog (Michael Ironside, of course). Hearing of the kidnapping -- and a reward of 3000 megacredits (!) for the safe return of the women -- is Wolff (Peter Strauss), a bounty hunter who lands on the planet to track them down. His ship is ambushed, his co-pilot is killed. He meets Niki (Molly Ringwald), a scavenger (sorry, "Scav") who offers to help him navigate the Forbidden Zone because she knows the territory. And off they go. 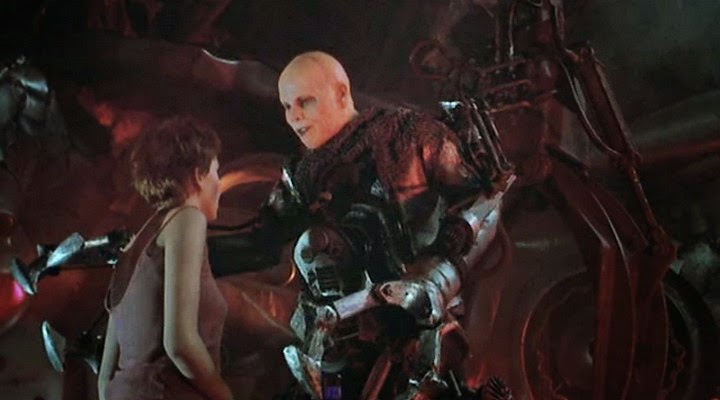 The setup is textbook for the era (era): roguish hero on a rescue mission against bad guy under prosthetics (with enormous badass claw hands, because this character was designed by nine-year old me). Overdog isn't a very good villain; he's a cool design that doesn't work on a practical level because he spends the whole movie harnessed in to a gigantic crane. He's a good representation of the whole movie -- it all good surfaces that don't do much. The movie looks expensive but feels cheap. Despite how much design in on display, there's very little real imagination that went into the movie. It's every science fiction property released between Star Wars and '83 -- the same aesthetic that would filter down through even the most disposable pop culture over the next few years. By the time we get to Overdog's lair at the end, the movie has become the feature-length equivalent of Rick Springfield's "Bop 'Til You Drop" video.

There were essentially two kinds of space movie knock-offs made in the '80s: ship-bound movies, in which characters ran around on metal grates in dark ships stolen from Alien, and desert-bound movies. Spacehunter is a desert-bound movie, in which characters dick around the desert because it's cheap to shoot and can stand in for a different planet (though it does feature a few ships lined with metal grates inside). It has the same burnt-orange hue of so many post-apocalyptic movies, plus the same cave-dwelling extras clad in heavy cloaks, headbands and sacks. Nearly everything about the movie is stock '80s sci-fi. 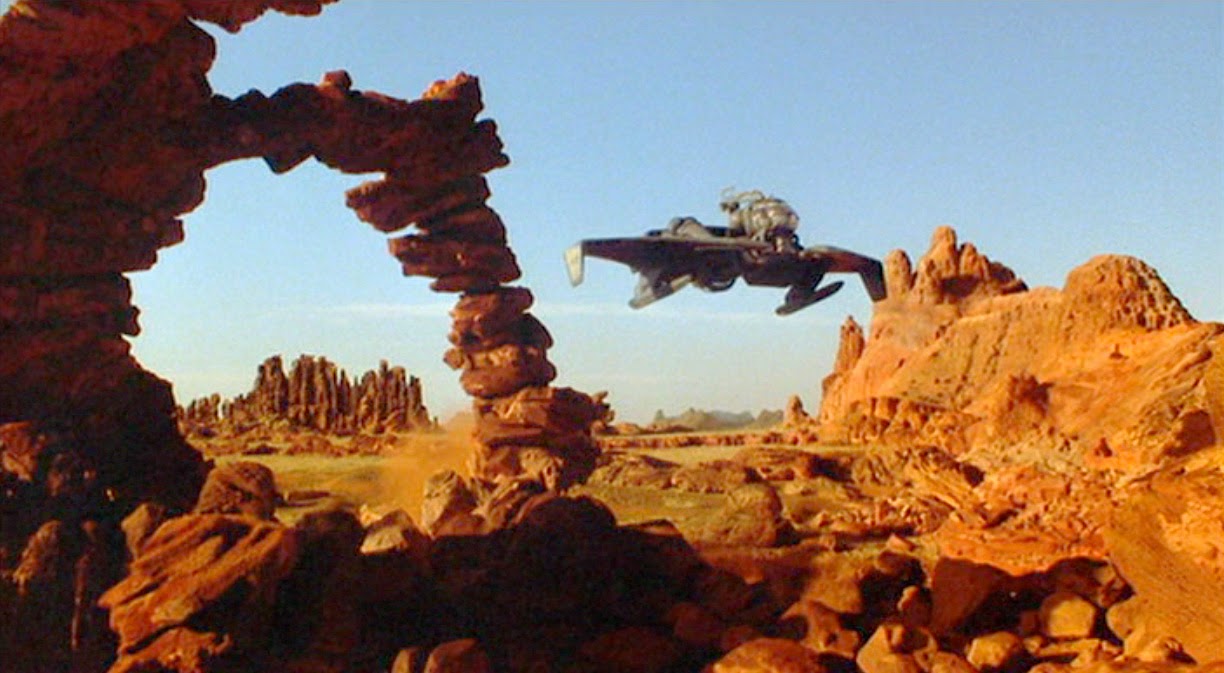 Not that I'm complaining. As a lover of stuff like matte paintings, models, miniatures, latex makeup and puppet work, Spacehunter pushes a whole bunch of my buttons. Elmer Bernstein's score does a good job at approximating the kind of rousing space opera feel Spacehunter is attempting to achieve, even if the movie never gets there itself. It's inconceivable to think that a movie this full of weird stuff could be considered generic, particularly in 2014 when we don't get movies that look or feel like Spacehunter anymore. But if you're a student of '80s genre fare, you know that films like this were getting cranked out on a pretty regular basis. HBO was lousy with them.

The 3-D component distinguishes it a little, only in that it means someone will bring up the title Spacehunter and someone else might say "Wasn't that one released in 3-D?" That's about as far as it goes. But it was just one small part of the 3-D revival of the early '80s, a trend that also included Jaws 3, Amityville 3-D, Friday the 13th Part 3, Parasite, The Man Who Wasn't There, Treasure of the Four Crowns, Comin' At Ya!, Starchaser: The Legend of Orin and Metalstorm: The Destruction of Jared Syn, a movie for which I am often confusing Spacehunter. Maybe it's because they both have nonsensical titles with colons in them. Maybe it's because they're both sci-fi movies released in 3-D in 1983. Maybe its because their lead actors look kind of alike. I can say that Spacehunter is a much better movie than Metalstorm. At least we get to see the Forbidden Zone, as opposed to Metalstorm in which we never get to see Jared-Syn destroyed. That's the last time you lie to me, Metalstorm. 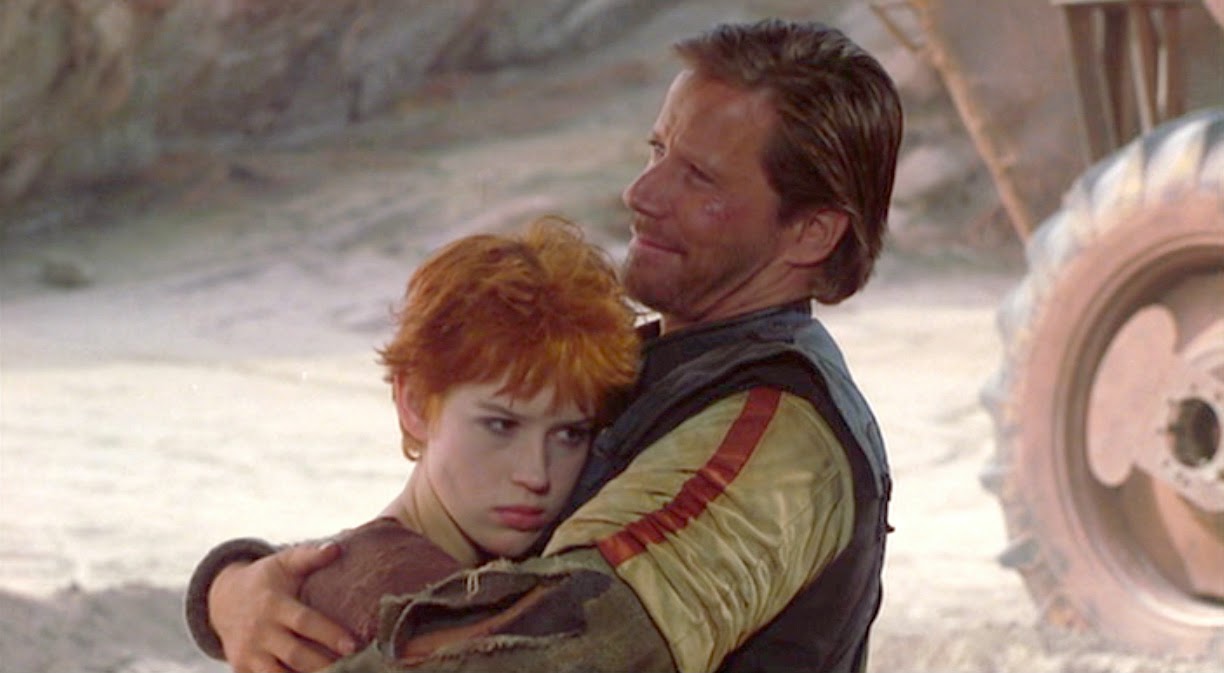 What makes the movie drag is the relationship between Wolff and Niki, who do nothing but bicker and annoy one another for almost the entire running time. Saddling the world-weary hero with a complaining sidekick is nothing new but almost always bad -- a simplistic misunderstanding of "conflict" that conflates it with "arguing." Some writers are able to make it work; Shane Black sets up the bickering between Jimmy Dix and Joe Hallenback in The Last Boy Scout as something like sparring and not genuine dislike. Both characters are in on it and having fun with one another. In most instances, though, you get Charles Bronson and Kathleen Wilhoit in Murphy's Law or even Johnny Depp and Armie Hammer in last summer's reboot of The Lone Ranger. There is little enjoyment to be derived from this kind of shrill back-and-forth; what is supposed to set up a shortcut for a character arc (see, they don't like each other but by the end they like each other) winds up being grating and unpleasant. It's two characters repeatedly showing the worst sides of themselves. In the case of Spacehunter, the pairing doesn't tell us anything about Wolff because we don't know who he is before getting stuck a whiny teenager. It also doesn't make us like either character despite the obvious attempts at humor. 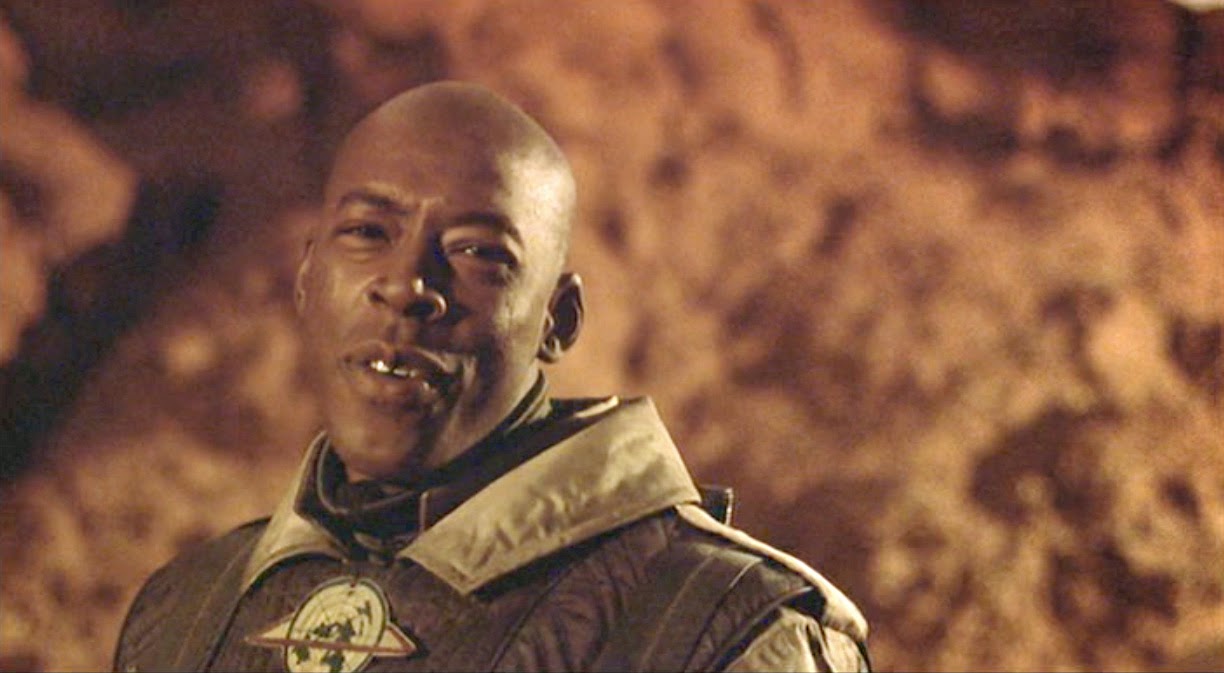 Things improve a little when the pair team up with Ernie Hudson, who plays another bounty hunter named Washington. Hudson is such a likable presence on screen that he compensates for Strauss' general lack of charisma, plus brings with him a sense of urgency that finally gets the story moving forward. Coincidentally, his appearance (second appearance, actually) lines up with the point at which the movie starts to get weird in an episodic way -- Wolff and Nicki meet one group of latex-covered mutants, then a group of Amazon warriors, then an underwater dragon/serpent thing and so on. That's when the movie works best, as it stops meandering and starts getting weird and specific. 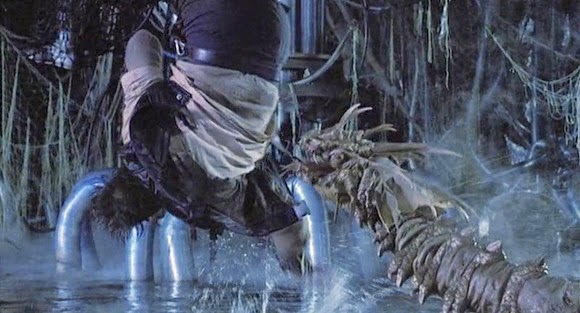 The movie was produced by Ivan Reitman, a guy best known for producing and directing some of the biggest comedies of the '80s (including Stripes and Ghostbusters). People often forget that Reitman also worked on a lot of genre movies in the beginning, executive producing two early Cronenberg movies (Shivers and Rabid) and, of course, producing 1981's animated anthology Heavy Metal, surely a future entry in It Came from the '80s. You can draw a pretty straight line between Heavy Metal and Spacehunter; while the latter lacks the former's gratuitous violence and cartoon boobies, both films are targeted directly at geeks and children (or, if you're me, geeky children). There's not much in the movie that will appeal to thinking adults -- not a strong story, well-defined characters or even a resolution worth caring about.

I didn't grow up with Spacehunter, but I remember desperately wanting to see it as a kid. Apparently I didn't want to see it badly enough, as it's taken me 37 years to get around to it. This is the kind of movie I would have watched over and over as a kid because a) it had a bunch of imagery that I responded to (and still do) and b) it was on. It's the kind of movie that was unremarkable in 1983 when stuff like this was hitting theaters on a monthly basis but has developed a cult following ever since -- not because it's particularly special, but because it's such a pure representation of the kinds of movies that we grew up with. It's not a movie you watch in 2014 and recognize as anything special. It's one you watch out of nostalgia.