I’m going to need your help with this one.

Konnichiwa, F This Movie community! I need you guys to help me with something. You see, I am a lapsed anime fan. Back in the late ‘90s and early 2000s during my college years, I was quite an anime enthusiast, but life got busy and, without even realizing it, I let that fire go out. My recent crash course in the Godzilla franchise (my upcoming second installment of the Godzilla Challenge is coming soon) has awoken my interest in all things Japanese and has gotten me really fired up about manga and anime once again, nearly ten years after I stepped away from it.

But here’s the thing: I don’t know where to start. When I stepped away from anime, the medium was on the cusp of breaking into the mainstream. Sure, there were box sets on the shelves at Best Buy and Pokemon dominated the toy and video game aisles at Target, but now we live in a geek culture where everything niche and genre has become big business and, more importantly, SUPER COOL. Anime is seriously EVERYWHERE these days, so it occurred to me that maybe it would be a good idea to tell you about some of my anime experiences from the past in hopes of a direction to move forward.

I’ve been a big fan of the 1985 Vampire Hunter D film (as well as the eventual sequel, Vampire Hunter D: Bloodlust) since it hit America in the early ‘90s. The movie is about a mostly silent and mysterious vampire hunter (named D) whose hand talks to him (named Left Hand, naturally) and fights the forces of darkness. The hand thing is never explained, as far as I can recall, which makes the whole thing even more interesting to me. 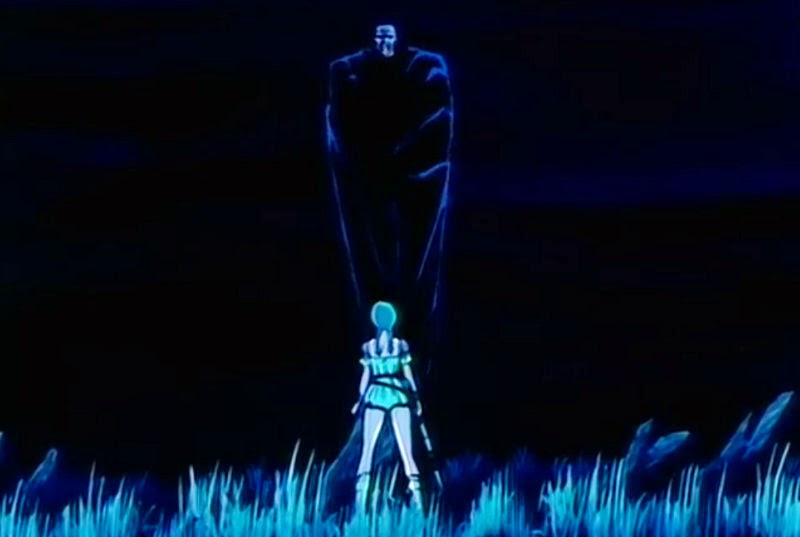 The original Vampire Hunter D was the first proper anime film that I ever saw and it really freaked me out. I couldn’t believe how dark and disturbing it was (though in retrospect it’s not nearly as dark as most of its contemporaries). The thing that stood out to me more than anything and that I’ve retained more than other aspects of the film was the way that the animation style conveyed massive size. Monsters and bad guys were impossibly large and the good guys or the victims seemed dwarfed by their attackers. Something about that idea really freaked me out. I’m reminded of something JB has pointed out a few times about the Godzilla films, which is how you can see this threat towering in the distance but can’t escape. It’s an unsettling use of imagery in a movie that is full of unsettling images. I still love Vampire Hunter D and the way it blends science fiction, horror, action, and spaghetti western elements into a cohesive whole. It’s a movie from the East that has taken all of the influences of the West and shaped them into a single product. I love it.

The next major anime discovery for me was Akira. I have to be honest, the first time I tried to watch Akira it was too much for me and I only made it about 30 minutes into the film. Looking back on it, I can see that I was probably too young and the ideas that are at the heart of the movie were too far outside my experience at that point. I revisited the movie in the late ‘90s and recognized it to as the masterpiece that everyone else sees it as. Akira tells the story of Tetsuo Shima, a cyberpunk biker with mental powers, and his friend and fellow biker Shotara Kaneda. There’s a lot of destruction and mayhem based around telekinesis and futuristic science stuff. 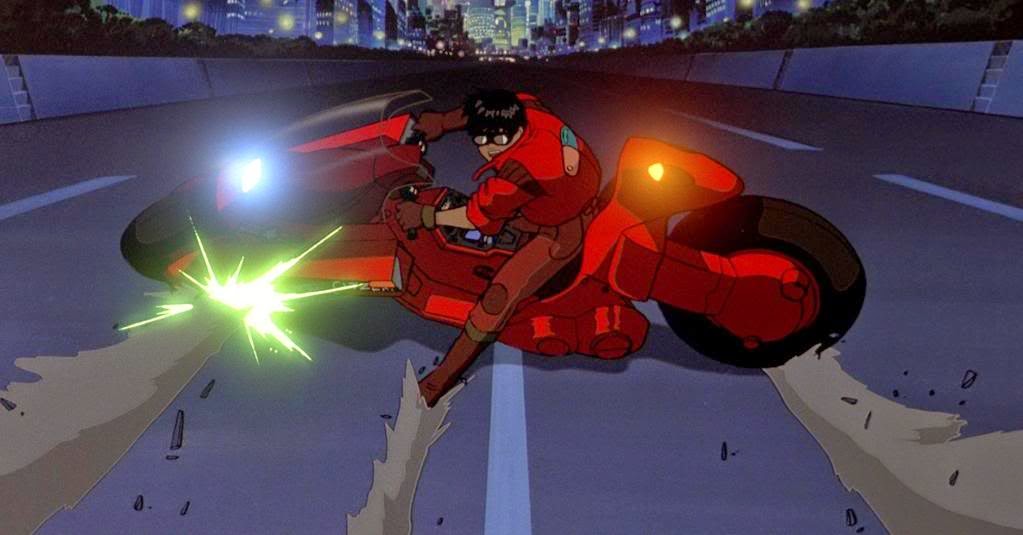 Looking back, I’m not sure what I was expecting on that first viewing, but it was probably something along the lines of the X-Men cartoon. Mental powers? Yeah, that’s like Jean Grey! Motorcycles? Wolverine drives one of those! What I got was a dark depiction of the future full of street violence, gang rape, evil science, and a generally grim overview that must have made Frank Miller VERY proud. Side note: why were cyberpunks such a big thing between 1986-1989? It was all green mohawks, head spikes, weird sunglasses and lots of black leather. Was the world really so concerned that neo-fascism was the wave of the future?

It seems like Akira was and still probably is considered the benchmark for feature film anime, so I feel a little bad saying that it’s still a tough watch for me. I get why it’s important and it’s really deep and well done, but it’s not something that I actually want to watch very often. I still find it to be just too upsetting and nihilistic. I appreciate it and respect it from a distance because I’m still a little afraid to get too close to it. I think that must be a compliment to its effectiveness. It is a masterpiece, after all, and America owes much of the anime boom to Akira, the movie that changed everything.

Something much more my speed was Ninja Scroll, another influential and popular movie that was making the rounds among the burgeoning anime scene circa 1995. Ninja Scroll is the story of a scoundrel ninja named Jubei who travels through feudal Japan and battles the Eight Devils of Kimon, a group of super-powered bad guys with gruesome and horrifying abilities. The movie set the bar pretty high as far as stylized violence and gore and has some unforgettable scenes. One of my favorite battles takes place inside a bamboo forest and is a perfect example of how animation can create iconic moments that can’t be replicated in any other medium.

Ninja Scroll seems have done in the ‘90s what Akira did in the ‘80s, which is turn on young western viewers to the potential of Japanese animation. It was followed by a TV series which retains Jubei as the main character. Apparently Leonardo DiCaprio has been trying to get a live-action adaptation of the story in front of cameras for years, but I don’t know why. You can’t tell the story any better than it’s already been told and I don’t think it would translate well to a Hollywood production, even with the all-Japanese cast that DiCaprio wants to use. There’s just no way to tell a story this graphic outside of anime. I don’t know why you would try. It’s a story suited explicitly for animation and all the freedom that format allows.

My ALL-TIME favorite anime series is Cowboy Bebop, which spawned a movie after the show concluded. Cowboy Bebop was the story of a couple of intergalactic bounty hunters trying to make enough money to keep food on the table and fuel in their ship, Bebop, all while trying to outrun their own pasts. To say anymore would be criminal because the entire series is built around character development and definitely has an arc. In a lot of ways Cowboy Bebop was Firefly and Serenity before either of those things existed. 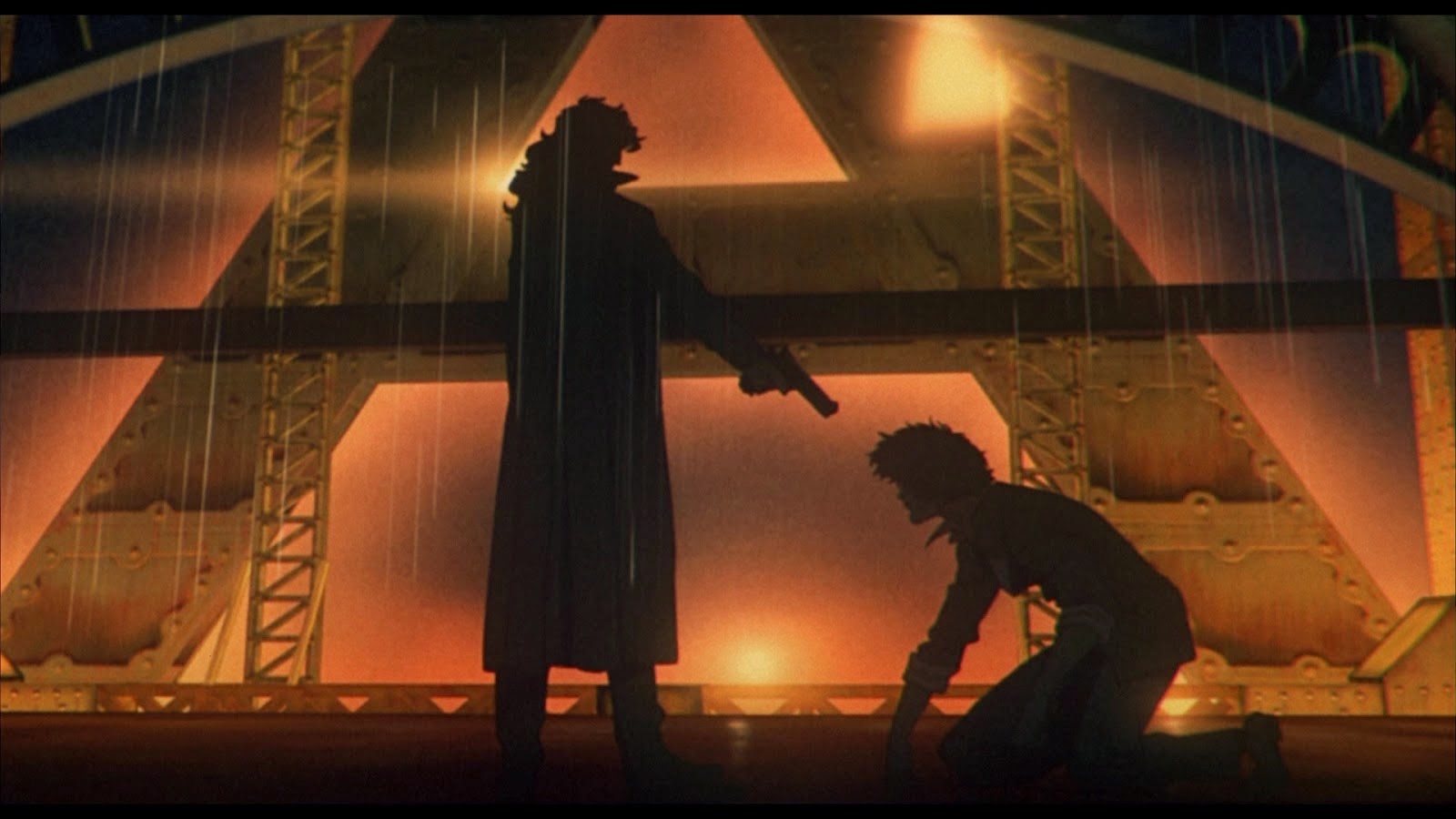 The show is one of my very favorite things and had some of the best music I’ve ever seen in a television show. The movie played as an extended adventure set between two episodes in the series and similarly had some fantastic music from Yoko Kanno, the composer behind the music of the series. We get a weird fusion of jazz, rock, pop, folk, and country. Music in Cowboy Bebop is just another character in a show entirely ABOUT its characters.

I’ve watched a TON of anime over the years but the one huge hole I have is the works of Hayao Miyazaki and his Studio Ghibli films. His movies, such as My Neighbor Totoro, Kiki’s Delivery Service, Princess Mononoke and Spirited Away, are beloved pretty much everywhere and that’s made them even more daunting for me. I’m told that not watching Miyazaki is like being unfamiliar with Disney; this seems proven by the fact that Disney has distributed the Studio Ghibli movies for years and has planned an acquisition of the studio. All this adds up to me feeling overwhelmed and not even knowing where to start. Do I start chronologically or do I start with the most critically acclaimed and then jump around? The whole thing makes my head hurt. Am I making this too hard? Probably. But I have a feeling that the innocence of Miyazaki’s work would much better suit where I am now as an adult, so I’m eager to start somewhere. 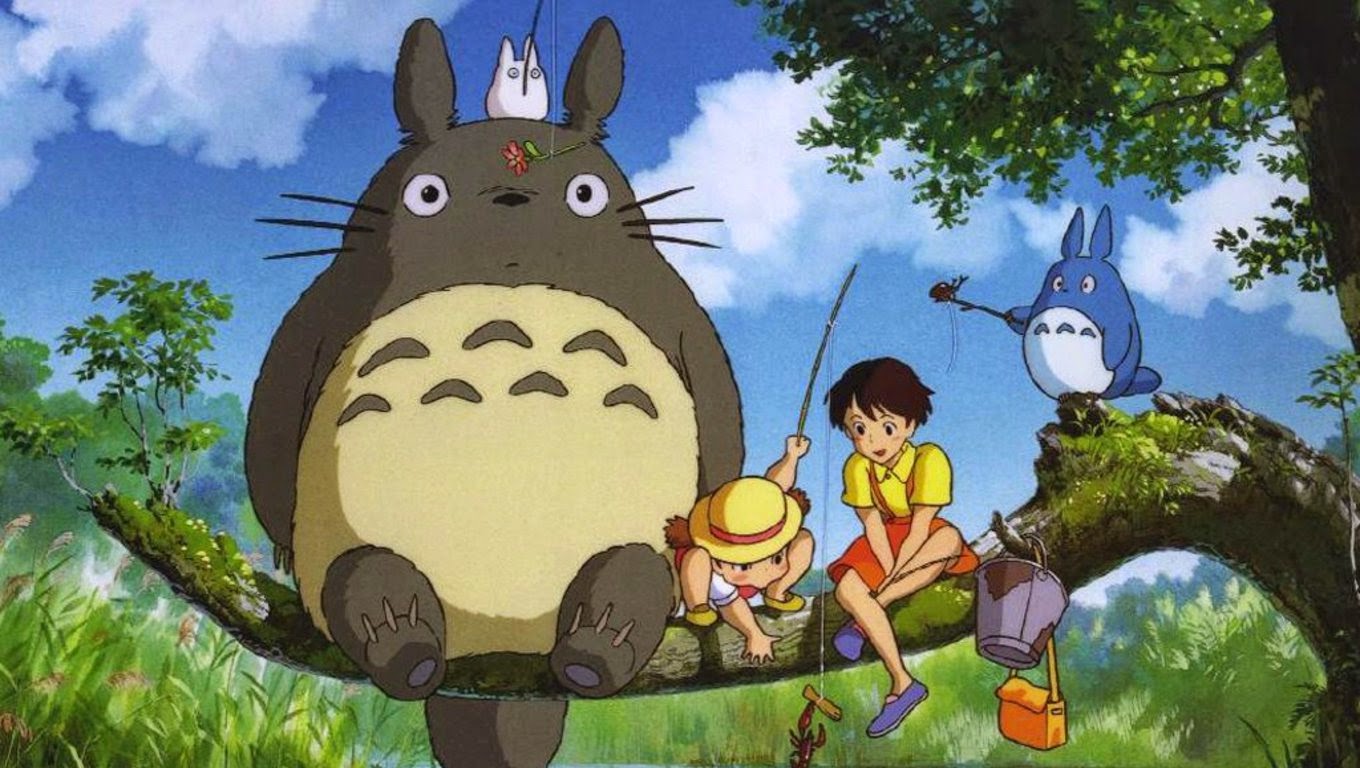 So that brings me back to the beginning: I’m hoping YOU can give me some suggestions for anime films that I need to see, particularly from the last ten years. Which Miyazaki film is your favorite and which one do you think makes the best jumping on point? Got an anime movie that you just love and want to talk about? I really want this to be a discussion about a storytelling medium which is now so popular and massive that it can be unapproachable. Most films fall into a genre (western, comedy, action) and can be easily categorized and located, but anime is a style that encompasses all genres. Furthermore, most anime films don’t get an American theatrical release and live via streaming sites and the home video market, propelled largely by word of mouth. That’s where we come in. Let’s talk some anime.
Posted by Patrick Bromley at 6:00 AM