Hollywood Heath Holland wants you to buy him some peanuts and cracker jack.

It’s summer again, with long, hot nights and days that seem to last forever. With summer comes that Don Henley song about brown skin shining in the sun. And with Don Henley comes his biggest fan, documentarian Ken Burns*. And with Ken Burns comes very long documentaries about jazz and baseball. So that proves it. Summer equals movies about baseball. It’s science fact.

Baseball movies have been around almost as long as movies themselves, yet for some reason it seems like most conversations about baseball movies start and end with Bull Durham and Field of Dreams. In honor of the season, I’ve put together a list of five films that are all great baseball movies but that I’m worried are slipping away and in danger of being forgotten.

A League of Their Own

You can’t go wrong with Penny Marshall’s 1992 movie about the All-American Girls Professional Baseball League, the real-life women’s baseball league that was created during World War II to keep the sport in the hearts and minds of America, and that’s why I’m making it the first movie on my list. Geena Davis, Rosie O’Donnell, Lori Petty, and everyone’s favorite bosom buddy Tom Hanks starred in this truly delightful movie full of quotes, great music, and inspirational storytelling.

The movie follows the team, coached by Hanks, as they deal with the ins and outs of what was (and probably still is) considered a man’s sport. Walls are broken down in ways that don’t feel preachy and this almost-all-female cast, helmed by a female director, charmingly makes a huge statement for gender equality. The message isn’t outdated either, because last time I checked there were still no women in major league baseball. 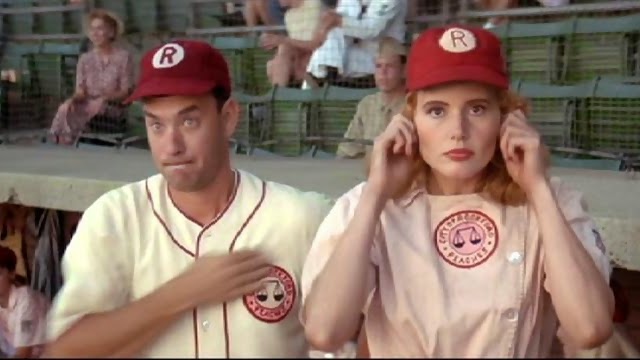 A League of Their Own is a quotable movie (“Are you crying? There’s no crying in baseball!”) with a great song that echoed the bitter-sweet tone of the film (Madonna’s “This Used to Be My Playground”) and was a really big deal when it first came out but seems to be more and more forgotten with each passing year. The movie and the women behind the real 1940s baseball teams deserve better than that.

Michael Ritchie (Fletch, Eddie Murphy’s The Golden Child) directed this 1976 movie about a bunch of misfit kids who comprise the worst Little League team in southern California. Walter Matthau stars as Morris Buttermaker, an alcoholic coach-turned-pool-cleaner who is tasked with whipping the team into shape and giving the kids something to strive for.

The Bad News Bears had some real stand-out performances from several of the child actors. Tatum O’Neal was only 12 years old when the film was released but she gives a performance that’s mature and nuanced. Similarly, Jackie Earle Haley (Little Children, Watchmen, Freddy in the Nightmare on Elm Street remake) actually manages to realistically portray a detached and dangerous rebel with a world of problems. Keeping in mind that these are children, it’s hard not to be impressed, and even a little distressed. 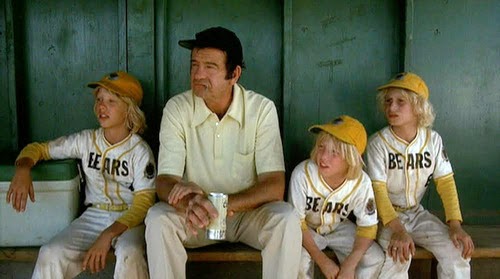 Because there are no new ideas in Hollywood, The Bad News Bears was remade in 2005 (with Billy Bob Thornton in the Buttermaker role) by Richard Linklater, the director of Dazed and Confused and School of Rock. It doesn’t really work because the original film is very raw and politically incorrect. You can transplant the premise out of the ‘70s and into modern times, but you can’t do the same with the attitudes or the je ne sais quoi that made the original such an electric experience. The kids in the movie not only drop four-letter words but racial slurs like it’s nothing at all. As such, the rawness of the original gives it a power that the remake doesn’t possess. My worry is that the remake is going to replace the original because it’s more polished and mainstream. Though now the remake seems to have dropped off the radar as well.

This classic baseball movie about the rise of Jackie Robinson as the first African American Major League player is notable for the fact that Jackie Robinson actually plays Jackie Robinson. I liked the movie 42 a whole lot, but there’s something about having the man himself portray the events of his story that make this the de facto (literally) version of the story. While the racial epithets from 42 would never have made it past the censors of 1950, there’s still no denying the impact of actually watching the man on screen go through his struggles and achievements. 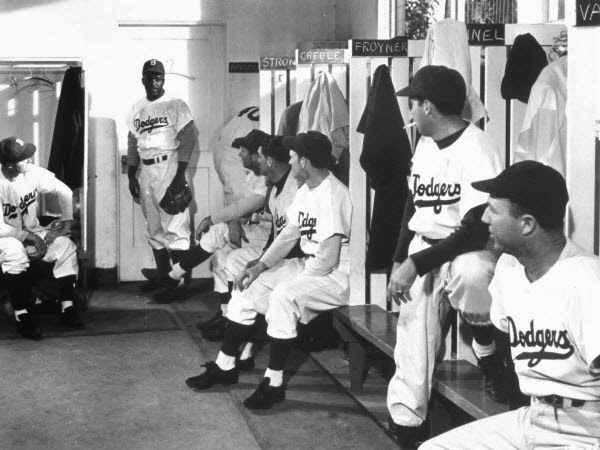 It was an important movie in an important time; 1950 was long before the Civil Rights movement made the huge strides it would achieve during the sixties, yet here we have a black man as the heroic STAR of a major motion picture that tells his story, more or less as it happened, without overly downplaying the challenges of racism in America in the first half of the 20th century. While there’s no way a movie from 1950 could or would have gone into the full detail of an ugly history, the fact that this movie even exists at all is a big deal.

While we’re talking about classics, let’s not forget the original Angels in the Outfield. Before it was a cute Disney movie with Tony Danza and Danny Glover, Angels in the Outfield was a 1950s comedy starring Janet Leigh, Jamie Lee Curtis’ mom and future victim of the Bates Motel. The concept is more or less the same: the Pittsburg Pirates suck and the manager is a jerk until he starts to her angels talking to him and telling him that they will help his team start winning if he turns his life around. Janet Leigh is a reporter who spins the whole story into a big news item that sweeps the nation. Think Miracle on 34th Street, but with baseball.

The film is classic AND classy. It doesn’t go for the obvious and you never actually see any angels, which is where I think the Disney version goes wrong. Imagine having to imagine, rather than being shown; the film seems to understand that it’s so much more satisfying to THINK you see what you see rather than to have something spelled out for you in the most obvious way. Subtlety: what a concept. 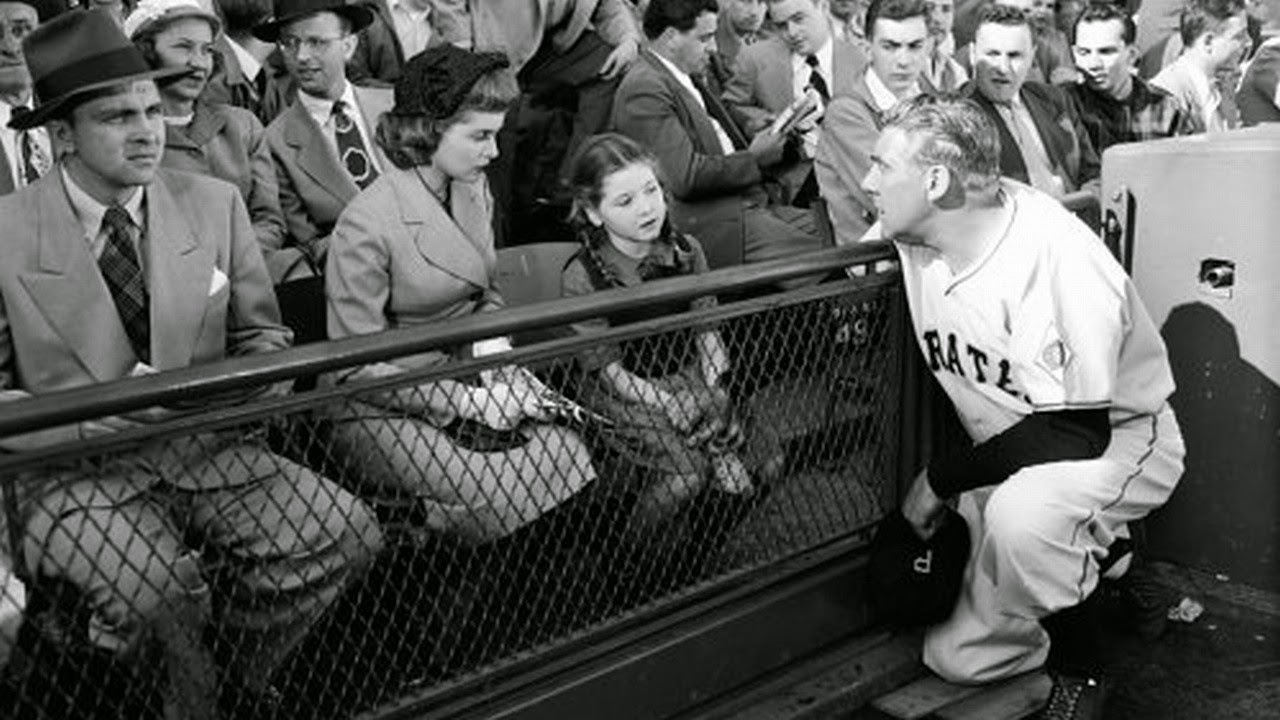 The movie is also notable for the film footage of actual baseball games from the time period. Ty Cobb and Joe Dimaggio appear, which I love because when movies give us glimpses into our actual history, particularly when that history is long gone, there’s a mythical effect. Seeing baseball as it was in 1951, with actual baseball players and actual baseball venues like Wrigley Field, Comiskey Park, and Forbes Field, is a like a trip in a time machine. Can you tell I was a history major in college? The past is alive, you guys! It’s right there on the screen, captured forever.

Is anything more American than Tom Selleck? The answer is yes, his mustache. Take Tom Selleck, his mustache, baseball, stick them all in Japan, and you have Mr. Baseball, a fish-out-of-water comedy that clichéd and formulaic but somehow completely watchable. Selleck plays a middle-aged baseball veteran who finds himself traded to a Japanese team called the Chunichi Dragons. Also on the Dragons is Dennis Haysbert, who I will always think of as the president from 24. Culture jokes and fish-out-of-water gags abound but there’s something about it all that I find very sweet and very entertaining. It’s probably the Selleck Factor. Selleck Factor is a scientific phenomenon in which the presence of Tom Selleck makes anything better and is proven to be a primary reason for the success of movies such as Quigley Down Under and Three Men and a Baby (the latter of which was also elevated by the Guttenberg Factor, a similar scientific phenomenon that mysteriously ceased to appear after 1990). If some of the movies that I’ve talked about here are off the beaten path, Mr. Baseball is way out in the wilderness. It’s on DVD but I don’t think I’ve ever met anyone else who has seen it and I don’t think I’ve ever seen it on television. My time working the video counter in the mid-'90s saw a lot of people walking past the VHS box but few actually renting it. It’s also a movie that I don’t think people who DID see it cared much for, which makes me sad. Dear Universal: if you’re looking for a defender of your Tom Selleck baseball movie from 1992 that was a box office bomb and has languished in obscurity for over 20 years, you’ve found one. Cue Magnum, P.I. music.

So there you have it, five currently underrated baseball movies that are increasingly unseen. This list could go on much longer because there are tons of baseball movies worth a look that DON’T star Kevin Costner. Be sure to check back here next week for five underrated movies about air hockey.

*There is no firm evidence to support the claim that Ken Burns is Don Henley’s biggest fan.
Posted by Patrick Bromley at 11:49 AM

Email ThisBlogThis!Share to TwitterShare to FacebookShare to Pinterest
Labels: a league of their own, baseball movies, heath holland on