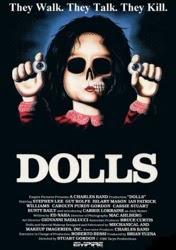 I was wrong about this one.

I first saw Stuart Gordon's Dolls -- the slight horror movie he shot between his two classic Lovecraft adaptations Re-Animator and From Beyond -- during our first Scary Movie Month in 2010. It was a Saturday night, and Erika and I decided to watch it on a whim (at the time it was streaming on Netflix) because neither of us had ever seen it but were both familiar with that image from the box art. I wasn't crazy about the movie. I got on our podcast covering Rob Zombie's Halloween and complained to my co-host Mike that the movie "fucking sucks" (I was far less measured and eloquent in the early days of the site) and expressed disappointment over what I felt was a bad movie from a filmmaker I like.

I don't know what I was thinking. 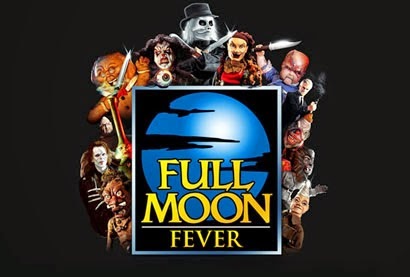 Maybe it's just a matter or context. I watched the movie during Scary Movie Month and was clearly in a different frame of mind, expecting something other than what this movie is. Or maybe I was comparing it to Gordon's other horror movies of the time, which are the work of a madman -- crazy gory, funny and over the top in every way. Dolls isn't those things. It's smaller. Gentler, even. If not for a few moments of violence inserted into the movie (reportedly at the insistence of some higher-ups, including Empire Pictures honcho Charles Band*) it could have been a great, creepy, kid-friendly horror movie -- the kind of gateway film used to introduce young people to the genre, scaring them in a fun way mostly by turning something they love against them.

Rewatching Dolls this week was like watching a different film. I remembered all of the characters and most of the major beats, but I was much more ready to meet the movie on its wavelength. This is a very European horror film, one filled with Gothic atmosphere and weird touches informed by fairy tales back when they were actually written to be scary (the Brothers Grimm are thanked in the end credits, as is child psychologist Bruno Bettelheim). It has a total sense of humor about itself but never becomes explicitly jokey, and while the whole thing still feels pretty undercooked it's a much, much better movie than I gave it credit for being four years ago. 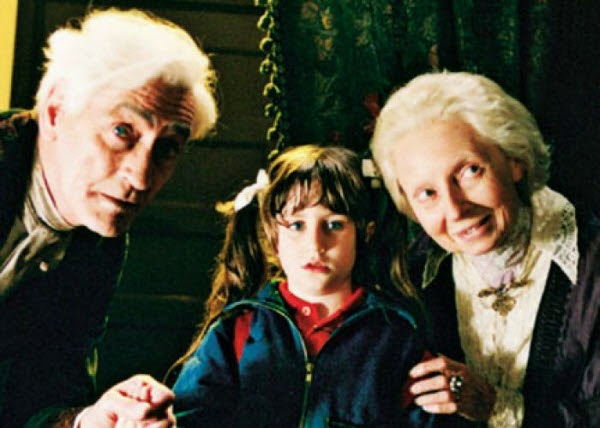 Filmed in 1985 but not released until 1987, Dolls finds Judy (Carrie Lorraine), a young girl traveling with her pathetic douchebag father (Ian Patrick Williams) and witch of a stepmom (Carolyn Purdy Gordon, the director's wife) through Europe when their car breaks down in a storm. They find a nearby house owned by Gabriel and Hilary Hartwick (Guy Rolfe and Hilary Mason), an eccentric elderly couple who welcome the travelers into their home mostly because they take a liking to Judy. Gabriel is a toymaker with a house full of dolls, and the Hartwicks bond with Judy over her love of her stuffed animals (established in an amusing fantasy sequence early on with a killer bear, which does a great job of setting up the movie's scary/funny tone). Childhood, you see, is important to them.

Soon, more travelers arrive: two female British punks who caught a ride with nice guy Ralph (Stephen Lee). Before long, all the assholes are reacting like assholes and the dolls make them pay for it, leaving sole believer Judy to try and convince Ralph of what's going on before they both end up trapped in the house as dolls for the rest of time. 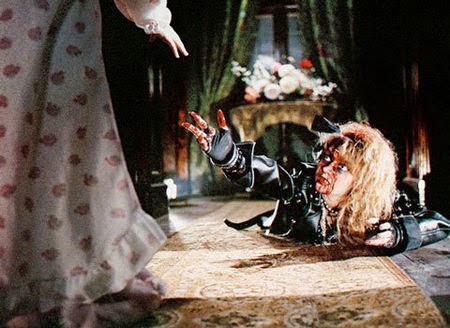 While Dolls was made under Empire Pictures, it seems almost solely responsible for determining the slate of films that would eventually make up Full Moon's catalog -- movies like Demonic Toys and Dollman and Dollman vs. Demonic Toys and Blood Dolls and Dangerous Worry Dolls and 10 Puppet Master films. Full Moon/Empire head honcho Charles Band clearly has a thing for killer dolls, and this is the movie that started it all. Well, Tourist Trap did something similar back in '79, but technically those were mannequins. There is a difference. Andrew McCarthy will only fuck one of them (RIP Hollywood).

Shot quickly as a way of getting maximum use of the Italian mansion where From Beyond would shoot, Dolls is, as I hinted, somewhat schizophrenic as a movie. Stuart Gordon wanted to make one movie -- one steeped in child psychology -- while producer Band wanted something more violent and edgy. Screenwriter Ed Naha was trying to write something more classically '40s inspired. The three things don't butt up against one another quite as uncomfortably as one might expect, and if I didn't know a little about the production history (and wish it was less gory so I can show it to my son sooner than later) I might assume it was the exact movie Gordon set out to make. I like its willingness to get weird later on in its (brief) running time, and there's a reveal as to what's really going on with the dolls that's creepy and fun and feels like it fits right into the world Gordon has created despite being a post-production insert. It makes no sense given what we see in the movie's final moments, but it's a cool moment nonetheless. 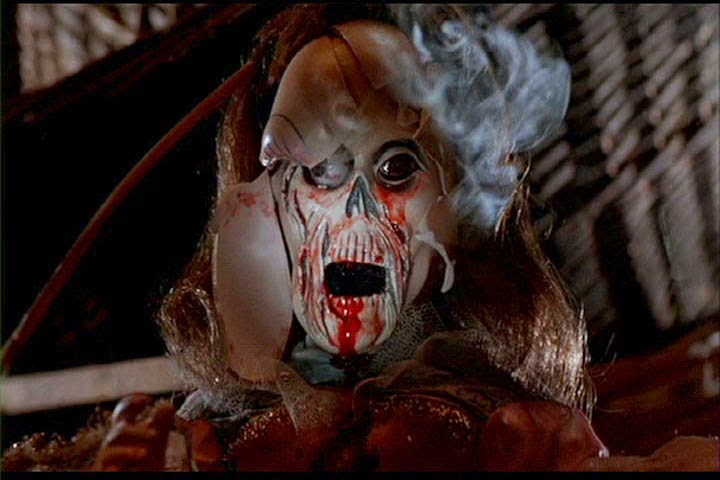 By now we all know what a talented and varied filmmaker Stuart Gordon is; the same guy who made Re-Animator also made Robot Jox and King of the Ants and Edmond and Dagon and Stuck, movies that might share similar sensibilities but which feel truly separate from one another. In 1987, Dolls showed that Gordon was capable of something with a different energy than his Lovecraft movies. What started as a quick one-off to maximize a location became a chance for Gordon to flex a new set of muscles, proving that he wouldn't be boxed in as a one-trick filmmaker and establishing him as one of the most dependable voices in the genre.

The way Gordon blends the Old Dark House movie with a dark fairy tale and keeps it all just funny enough makes Dolls much more a special and interesting movie that I originally realized. It has its own kind of nightmare logic -- specific rules that must be followed or else bad people will be punished. It's Grimm's fairy tales by way of E.C. Comics. The simple morality of it all is another reason I wish it was a bit less gory and a bit more appropriate for kids, as it offers them a good message -- be happy you're a kid, because it's incredibly special -- without talking down to them when it comes to be creepy or weird or atmospheric. As a grown-up (chronologically at least), I can embrace the gore as part of what makes Dolls the cool little movie that it is. But seeing how close it comes to be something else and knowing what I know about the production history does make me long a little bit for what might have been.

On that Halloween podcast where I stupidly panned Dolls, I did make fun of the scene in which a squad of toy soldier dolls pull out rifles and shoot one of the British punks. I stand by that. It's pretty lame. Maybe it's because Gordon wasn't trying to make a gross-out movie. Maybe it's just a lack of imagination. When I see a movie about killer dolls, I want to see the filmmakers to come up with clever doll-related kills. Apparently, some of the gorier footage shot after the fact included a character's intestines being pulled out by tiny pitchforks. It was eventually cut for going too far, but I would love to see that. Tiny pitchforks sound adorable. 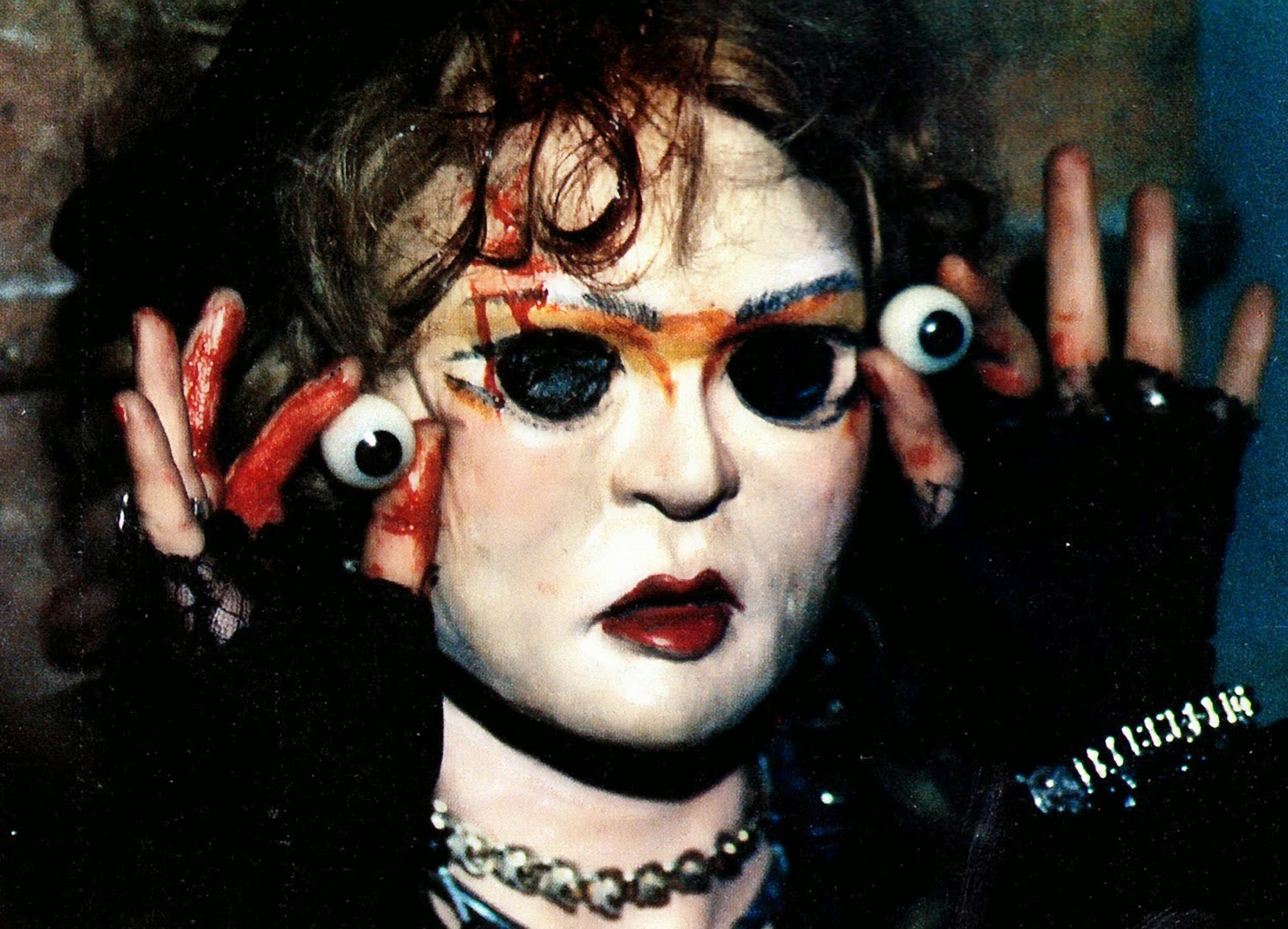 One of the movie's strong suits is the presence of Stephen Lee as Ralph. While his performance is sometimes uneven -- he has a tendency to go a little too big -- it's the key to enjoying the movie. Ralph is not our audience conduit; it's too much told from a child's perspective (Gordon even shoots a number of scenes from a low angle, the way a kid might view the world) and requires that we embrace our inner child to get on board. But that kind of suspension of disbelief isn't always easy, and Ralph is the guy who represents that more than anyone. He's the guy who recognizes how crazy everything is -- his loud, shocked outbursts are very funny -- but who has to adapt to the rules and embrace childhood in order to make it through. That's us. Yes, we might find the prospect of killer dolls silly (as horror fans we really shouldn't), but if we're going to make it to the end of the movie we need to tap in to the movie's wavelength. I guess I wasn't able to do that the first time I saw it.

I get asked all the time why I bother rewatching movies I don't like. It's because my tastes change. It's because context changes. It's because I know I'm not infallible. It's because of movies like Dolls. I could have easily written it off when it didn't do anything for me four years ago, but that would only have been my loss.

*This information comes courtesy of the Dave Jay's new book Empire of the 'B's: The Mad Movie World of Charles Band.

Got a movie you'd like to see covered in Full Moon Fever? Let us know in the comments below. Sign up for Full Moon Streaming here. Dolls is not currently available on FMS.
Posted by Patrick Bromley at 6:30 AM