Back to normal this week! Good stuff for you to watch! Happy 4th of July from all of us!! 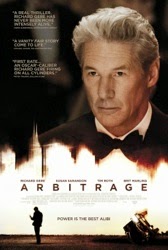 Adam Riske: Arbitrage (2012, dir. Richard Jarecki) Am I alone in thinking Richard Gere is a pretty underrated actor? He's great at playing the executive type and he's excellent as the Bernie Madoff stand-in in Arbitrage. The movie itself is not as strong as the lead performance, but it's still good. I'm a sucker for corporate thrillers and this is one of the best ones I've seen in the last few years. For fans of The Trip with Steve Coogan, notice how accurate Coogan's description of Gere's acting is. It adds to the enjoyment of watching Arbitrage. 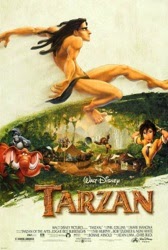 Heath Holland: Tarzan (1999, dir. Chris Buck, Kevin Lima) I admire this late-'90s Disney animated project enough that a couple of months ago it landed on my list of underrated Disney films and I'm happy to report that it's one more in a line of "classics" (in parenthesis because Disney labels everything they do as a classic) from the House of Mouse to be added to Netflix. Tarzan came at a time when things were looking pretty dark for Disney's animation department. Hand-drawn stuff wasn't really selling anymore and the glory days of The Lion King were over. Still, Tarzan manages to retain the Disney magic with a screenplay that follows the time-honored formula of the company's legacy films while utilizing cutting edge animation techniques to bring some stunning visuals to life. There would be a few more traditional animated films from Disney over the next few years (Atlantis: The Lost Empire, Lilo and Stitch, Treasure Planet), but it would be about a decade before they returned to the more traditional type of  storytelling seen here. 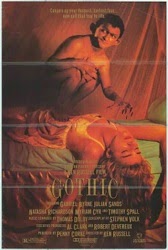 JB: Gothic (1986, dir. Ken Russell) Have you ever wanted to attend the “Switzerland weekend” that saw poet Lord Byron host fellow poet Percy Shelly, his wife Mary, his mistress Claire Clairmont, and his personal physician John Polidori? This is the movie for you. The story goes that it rained all weekend, so Byron (Gabriel Byrne) suggested an indoor game, a competition to see who could write the best ghost story. Percy Shelly (Julian Sands) ignored the contest and wrote the rough draft of “Prometheus Unbound.” Lord Byron and Clairmont (Myriam Cyr) wrote nothing; they were both too busy doing “other things.” Polidori (Timothy Spall) wrote “Varney the Vampire,” a short story that influenced Bram Stoker when he later wrote Dracula. Mary Shelly (Natasha Richardson) wrote the first draft of Frankenstein. It has been said that modern horror began that weekend at Byron’s lakeside chateau. This very trippy film is an imagining of what MIGHT have happened that famous weekend—and Ken Russell directed it. Highly recommended. 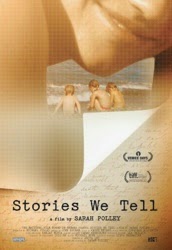 Patrick: Stories We Tell (2013, dir. Sarah Polley) This documentary from actress-turned-director Sarah Polley was on my list of favorite movies from 2013. It is a wonderful movie about family. It tells three or four different love stories. It examines how we share stories and how we present them as "true" in movies by using certain techniques -- it's a great movie about making movies. Go in knowing as little as possible. It's a really special film.
Posted by Patrick Bromley at 6:30 AM