We have a little bit of a tradition in our house. My wife, a Spanish teacher for nearly thirteen years, feels compelled to watch Richard Linklater’s movie School of Rock every single August, just before the students return for classes in the fall. In fact, this tradition has been going on so long that it predates my arrival on the scene by years; it was already well in place by the time I brought my own obsessions and cinematic proclivities into her life.

Just to cover the bases, School of Rock is the film that stars Jack Black as a rock musician and slacker who finds himself pretending to be the substitute teacher at a prestigious private school in Queens, New York. I have to confess that Linklater’s work tends to be a little bit all over the place for me. The same guy who directed Dazed and Confused, the Before Sunrise trilogy, and is now getting fantastic reviews for his film Boyhood, is also the guy who directed The Newton Boys and the remake of Bad News Bears, neither of which did much for me. 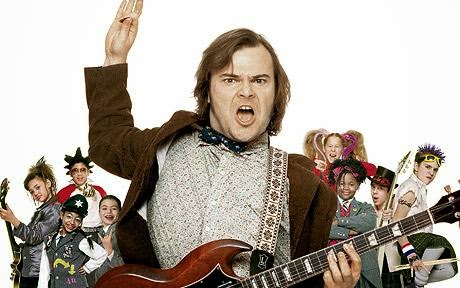 School of Rock is not a movie that’s ever done a whole lot for me. I like Jack Black’s heavy metal shtick a lot, but I think it’s done better in other movies, namely Tenacious D in The Pick of Destiny. I don’t particularly appreciate or enjoy when Jack Black does sincerity or sweetness, and I’ve always thought that what he does in School of Rock falls flat because it just doesn’t feel like that’s who he is. He’s not a romantic lead (as cast opposite Kate Winslet in The Holiday) and I don’t buy him as a kid-friendly star, despite winning multiple Nickelodeon Kid’s Choice Awards. This is what I had decided long ago. So each year when August rolls around and School of Rock gets pulled off the shelf, I’m usually indifferent and sort of watch without investing.

But Mrs. Holland gets inspired by this film like you would not believe and it really works for her. I’m not saying that it’s directly because of School of Rock, but the movie really does help her to switch gears from summer back to biz-niss, and I don’t know if she would admit this, but it seems to remind her why she got into teaching in the first place. She has a bond with her students that you wouldn’t believe, and she’s got a reputation both inside and outside the school that is actually pretty much exactly like the one Jack Black has with all those kids by the end of the movie. I mean, she’s not a slacker and she doesn’t go to work hung over (much). As far as I know she doesn’t play guitar in class and she doesn’t pass out rock albums for homework. But she does have a CRAZY connection with all TEN grade levels that she teaches (preschool, kindergarten, and grades one through eight) and she makes a big difference in a lot of their lives; many of them talk about how she’s the best teacher they’ve ever had.

Now, listen, I’m not writing this column just to brag about how cool my wife is (but come on, she is VERY cool); I’m also writing it because this year when that Blu-ray came off the shelf, I vowed that I’d try to look at School of Rock with fresh eyes and see what it was that was so inspiring and special about this movie to her. That’s what I did, and this was the year that I went from saying “it’s okay” to saying “OH. I get it.”

The first thing that grabbed me was the opening credits. Linklater breaks from tradition by having the credits exist in the environment within the film. Names and titles are written on the back of denim jackets, posters in a club, and the film’s title is a glowing neon sign on a wall. It’s a creative use of space that doesn’t waste a moment. Similarly, the ending credits roll over a one-take of Jack Black’s character and the students playing AC/DC’s “It’s A Long Way to the Top (If You Wanna Rock ‘N Roll).” I like that not a single second of the movie is spent on a dull black screen and that Linklater has filled every frame with storytelling. 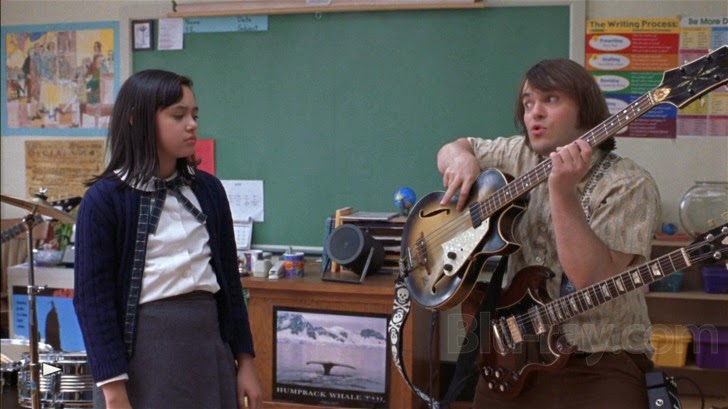 One of my big complaints, as I wrote earlier, is that I’ve always felt like Jack Black feels faux-sincere in his performance. This time around I tried my best not to put the actor in a box and allowed him the opportunity to win me over. After all, I tend to get caught up in my own staunch ideals and opinions, and if I’m being honest, I tilt at windmills. I know this; the older I get the more things I decide are broken and must be deconstructed. Making an effort to lower my defenses made a big difference, because I was kind of amazed at the rapport that Black has with his young co-stars in this movie and I’m not sure why I’ve never seen it there before. You can usually tell when someone isn’t really crazy about kids, and it really seems like Jack Black is having a great time being around these young people. It’s touching and he is genuinely warm and sweet. I was wrong about him. There, I said it.

Speaking of his young co-stars, I don’t think most of them come from a professional acting background (with the exception of Miranda Cosgrove, who found huge success with iCarly), but they work really well in the context of the movie. A lot of child actors can come across as either wooden and stiff or overly precocious (in a bad way), but the kids in School of Rock feel like real kids. That’s a good thing, because I can’t stand a lot of child performances. I get the impression that these kids are just being themselves.

This movie also reminded me that we don’t get nearly enough Joan Cusack on our movie screens these days. She’s fantastic! During this viewing of School of Rock, my wife and I had a discussion about how John and Joan Cusack look like the exact same person, only one has long hair and wears makeup (that would be John, OF COURSE) while the other one doesn’t. I say Joan is way more attractive while she disagrees and thinks John is. My point is simply that Joan Cusack is awesome in everything she’s in and I want to see her in more movies NOW. So please get on that, Joan, thank you. 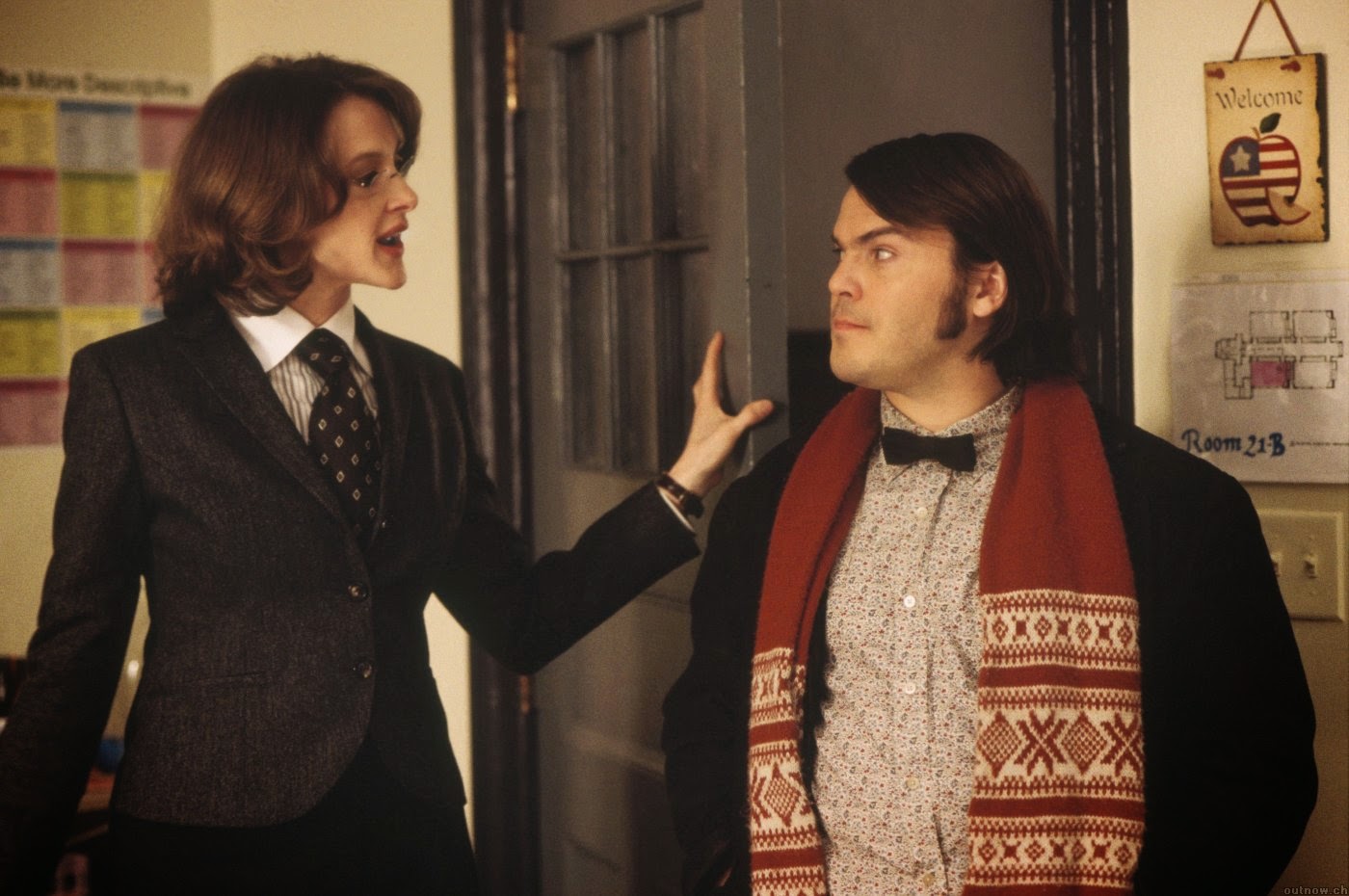 From the filmmaking side of things, director Richard Linklater makes some choices here that define this film as different from things he’s done before. He’s clearly a fan of classic rock, which plays an integral part in both Dazed and Confused and School of Rock, but music is used much differently in this film. Here it seems more raw and under-produced, lending an approachability and DIY feeling to it, almost as if it were meant to inspire you to finish the music yourself. It’s never used to show how cool the characters are by accompanying montages of the actors playing in slow motion.

Linklater also seems to be taking a side and making a statement with this movie. “Rock ain’t about getting’ loaded and being a jerk,” Jack Black’s character says to a student who is falling in with an older, more rebellious crowd. Compared to a film like Dazed and Confused, this is a pretty different message for this director. This could have more to do with the writer, Mike White, than with Linklater, though he does seem to focus on kids who slip through the cracks in suburban life. Given that, School of Rock is an overwhelmingly positive and optimistic movie, even if it dresses up as a slacker comedy.

The preachy truth at the center of the movie seems to be that it’s important for kids to be a part of something. In School of Rock that something is a band, but it could also be just about anything. It could be sports or academics, or it could be something as unconventional as a rock band. The themes and messages here are pretty on the nose, which is just one more thing that kind of grossed me out, but there are worse things a movie could be than positive and inspiring, especially given that the target audience for this movie seems to be kids between the ages of 12 and 16. It’s not a great movie, nor is it my favorite Richard Linklater film, but that doesn’t even matter. My wife loves it and her annual viewing reminds her of why she wanted to teach in the first place: to make a difference in each one of her students’ lives and change them for the better. 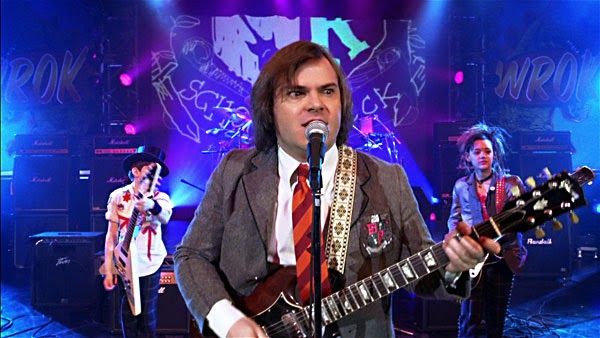 The bitter pill is that I think I was wrong about School of Rock. I’m not just saying that because I was able to see it through someone else’s eyes and see how movies inspire each of us differently, but that’s a lesson I’d do well to remember. Movies are more than what I alone take from them, and we all have favorites that unexpectedly hit us in just the right way and mean something to us personally. My favorite movie, Robin Hood: Prince of Thieves, is kind of a mess, but it hit me in just the right place at just the right time and opened up the door to a lot of interests that shaped who I am. It’s far more respectable that one of my wife’s favorites has something to say about making a difference in the world around you and being a better person. My bad, Richard Linklater and Jack Black. I admit it, I was wrong: School of Rock rocks after all.
Posted by Patrick Bromley at 12:00 PM