We have a theme this week! It's "Movies on Netflix you should watch." 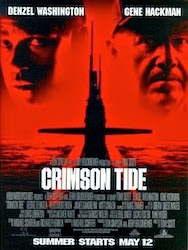 Adam Riske: Crimson Tide (1995, dir. Tony Scott) I was 12 1995 when Crimson Tide was released. Back then the local newspaper let people call in and give a one line movie review that they would print the next week in the entertainment section. One of the movies I "reviewed" was Crimson Tide. I said it was a movie that needed to sink to the bottom of the ocean and never come back up. What a stupid asshole I was back in junior high! Crimson Tide has since become my favorite submarine movie and one of the best movies the late Tony Scott ever directed. There are few experiences more awesome in film than watching Denzel Washington and Gene Hackman yell at each other for two hours. I'm sure most of you have seen this movie but I think it's time for a revisit. If you don't, I'm placing you under arrest on the charge of mutiny. 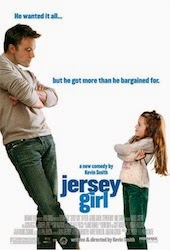 Heath Holland:  Jersey Girl (2004, dir. Kevin Smith) Confession time: this is probably my favorite Kevin Smith movie. It used to be Mallrats, though now I recognize that my affection for that movie is mostly from Jason Lee's performance and not because of anything exceptional in Smith's screenplay or direction. Jersey Girl came on the heels of five consecutive View Askewniverse films (Clerks, Mallrats, Chasing Amy, Dogma, Jay and Silent Bob Strike Back) and I had become increasingly frustrated that Smith was settled into a pattern of sameness. He was and is capable of greatness; his comic book work shows that he can write action and he knows how to be epic when he needs to, yet he continued to write and direct what were essentially stoner comedies. I always thought Kevin Smith was "one of us" within the entertainment industry, a director who knew that the comics and genre films could be smart and funny and emotionally gripping. Unfortunately, Jersey Girl didn't do very well and he immediately went back to his comfort zone with Clerks II. Jersey Girl was a critical moment in the career of Kevin Smith and I wish things had turned out differently. I think there's a lot to like about it, especially the mature story about loss, parenthood, and finding love later in life. It's great to see Liv Tyler not wearing elf ears and Ben Affleck delivering a performance we haven't seen out of him in a long time. And let's not forget George Carlin. If you've heard awful things about it but never seen it, Jersey Girl may have a few surprises in store for you. 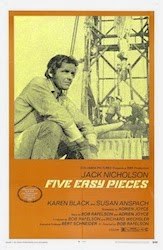 JB: Five Easy Pieces (1970, dir. Bob Rafelson) This film will take you back to a time before robots in disguise, before space adventures, before comic book heroes, before loud explosions that everyone in the multiplex can hear, before multiplexes even... when movies were about people and what it feels to be human. This is the film that made Jack Nicholson a star and features incisive dialogue, a measured pace, and consistently outstanding supporting performances. The story centers on Robert Dupea, a man consistently dissatisfied with his life. It is not a film for children; it is a film for adults, who I feel all go through this phase, usually in their thirties. Five Easy Pieces would be worth watching if the whole film was just Jack Nicholson trying to get toast at a diner.

PLEASE NOTE: Someone on Netflix suggested "'It's hard to like a movie about a self-loathing, angry jerk." Those are my favorite movies. 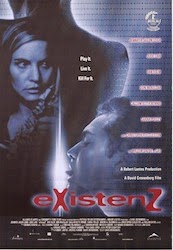 Patrick: eXistenZ (1999, dir. David Cronenberg) I recently named David Cronenberg's most annoyingly-titled movie one of my favorite underrated sci-fi movies, and it's a distinction I stand by. I'm not sure it's one of his best, but it is a very good movie of his that a lot of people overlook. I'm sure it doesn't help that it shares a number of similarities with his own Videodrome and was released near The Matrix, which had the same "is this reality or virtual reality?" premise without the messy teeth guns and vagina game pods. That David Cronenberg. He'll put a vagina anywhere. There are a ton of cool ideas in it (because Cronenberg), interesting world building, bizarre body horror and Jennifer Jason Leigh is a stone fox. Death to the demoness Allegra Geller!
Posted by Patrick Bromley at 12:00 PM