I’ve never met a Robin Hood movie that I didn’t like.

The legend of Robin Hood is one of my favorite stories in any form of media. Because it’s not particularly rooted in any fixed event or year, it’s a tale that remains open to vastly different interpretations. Few depictions of Robin Hood are the same.

It’s no coincidence, then, that the legend of Robin Hood has been filmed more than just about any other story in our culture. I’ve seen a lot of different versions of the story across film and television (though not nearly all of them) and each version has had some sort of an impact for me. What follows is not a complete list by a long shot, but here are some of those movies and a few thoughts about them. 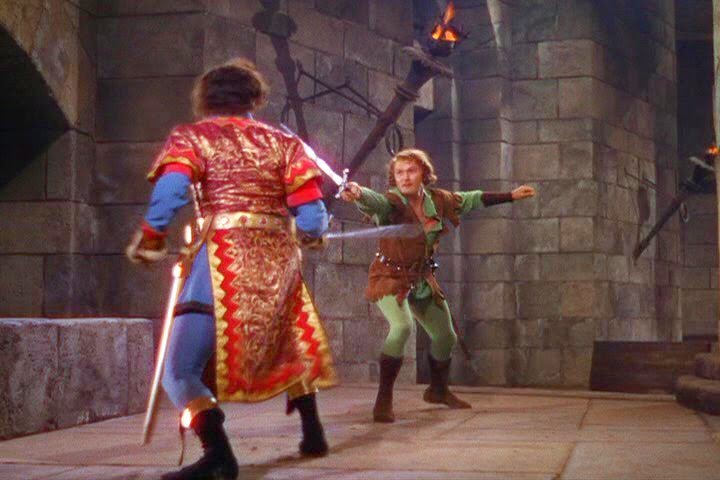 I used to think this movie was totally old and busted. My first exposure to it was in the early ‘90s on cable and I’m embarrassed at how quickly I dismissed it. Now I know that there were at least three silent film versions of this story made before this one (which I haven’t yet seen…I know, I suck), including the 1922 Douglas Fairbanks version that some people consider to be the best interpretation of the tale on film (it’s one of those rare movies to hold a 100% freshness rating on Rotten Tomatoes).

For me, however, this version starring Errol Flynn, Olivia de Havilland, Basil Rathbone, and Claude Rains is the one that I now hold in the highest pedigree. This 1938 gem comes from the era of classic Hollywood that I’ve come to hold a near-spiritual reverence for and features some of the greatest movie stars ever. Adding to the pedigree, it was directed by Michael Curtiz, the man who made Angels with Dirty Faces, Casablanca, White Christmas, and what I consider to be Elvis’ best (and darkest) film, King Creole.

When I think of Robin Hood as a character, it’s the image of Errol Flynn that I see. In fact, though there were several Robin Hood television shows that graced the small screen during the 1950s in both Europe and America and plenty more theatrical outings during the same period, I contend that Errol Flynn’s depiction remains the definitive big-screen representation of the character. 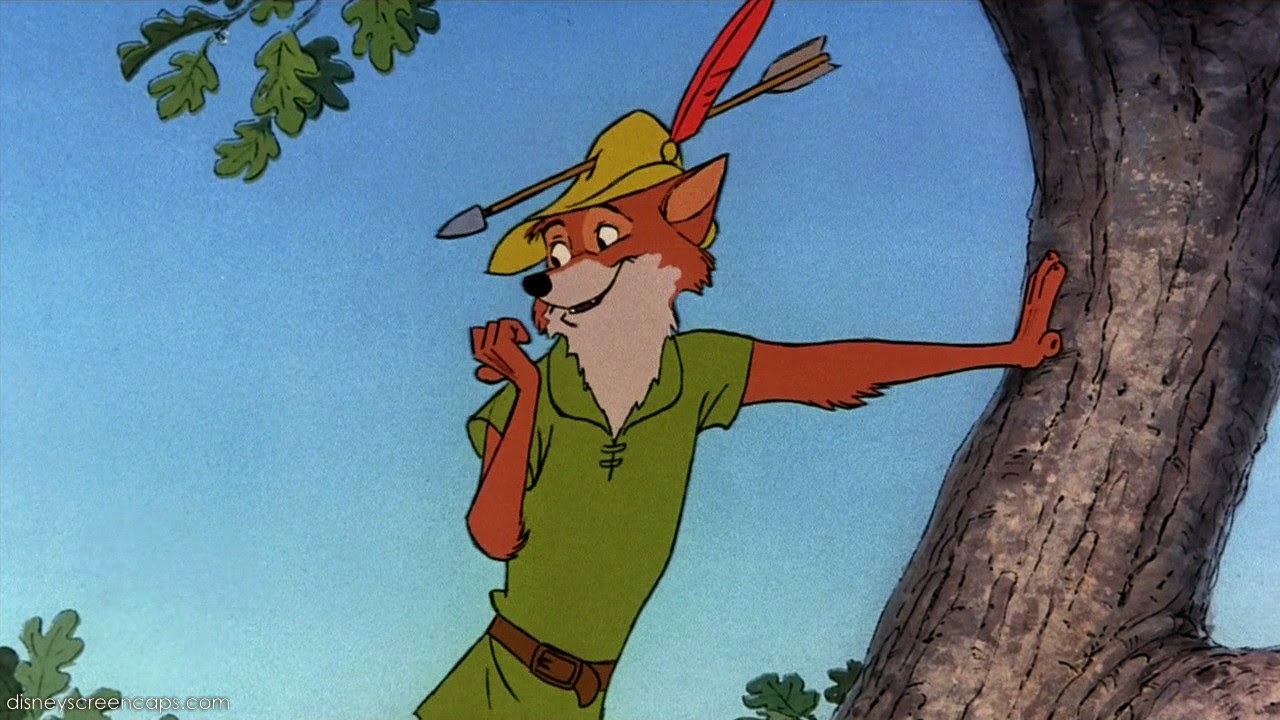 A lot of us grew up with the Disney version of the Robin Hood legend and may have seen that version before any of the others. While not held in the same regard as the major Disney classics, this was one of the more successful ventures created during the thirty years between Sleeping Beauty and The Little Mermaid. I imagine there’s an entire generation of movie fans who knew the voices of Phil Harris and Andy Devine from Disney films like this one way before we discovered their other work in front of the camera. This film was also big in pushing the folk music of Roger Miller, who appears here as the minstrel Alan-a-Dale. Y, ou may not know his music, but if you ever come across a Roger Miller tune on satellite radio, you recognize the voice from Robin Hood. This one really seems to have come into its own and built a following in the last ten years or so. Leave it to Disney to make slightly-above-average movies rooted in the ‘70s feel like timeless classics. 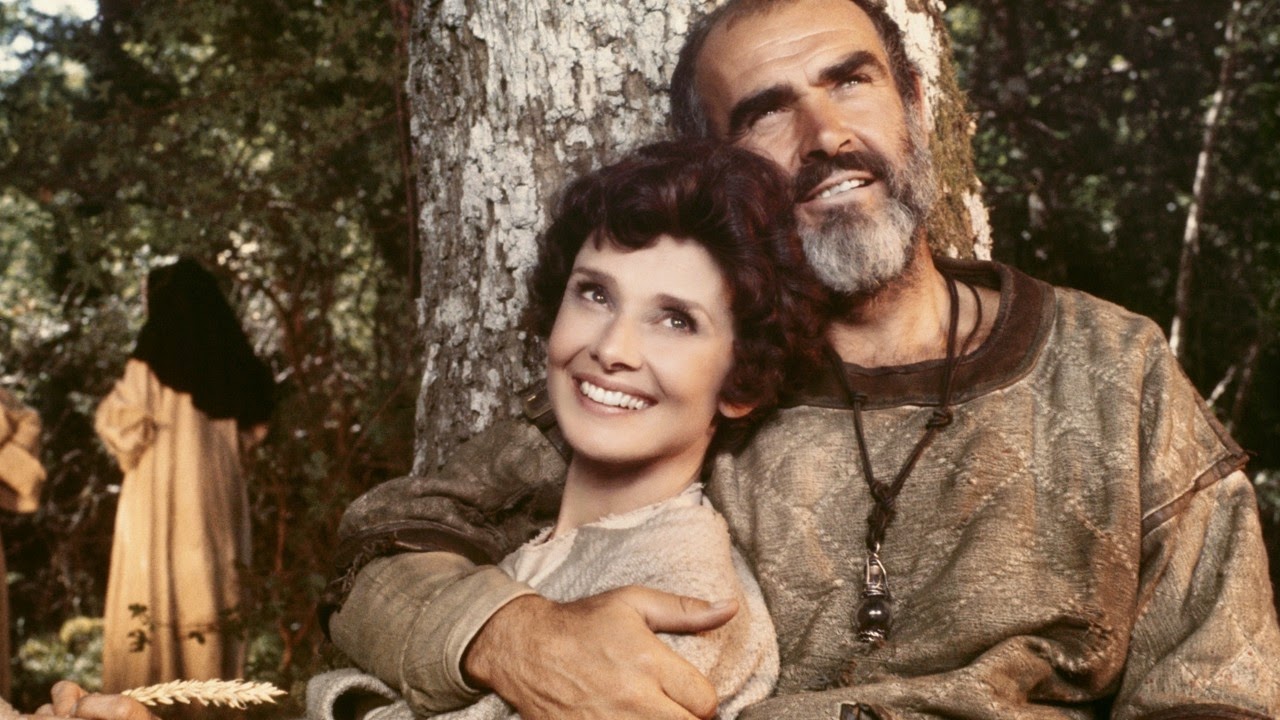 Sean Connery stars in this project directed by Richard Lester, the man who brought us the Beatles movies A Hard Day's Night and Help!. It’s one of the more unconventional productions of Robin Hood at the movies; Connery’s Robin Hood is older (the actor was 46) and has been away for years fighting as a captain of Richard the Lionheart’s army in the time after the Crusades. Maid Marian (Audrey Hepburn), in his absence, has joined a convent and become a nun.

The real stars here (besides Connery’s hairy legs) are the supporting cast, which has Robert Shaw (Jaws) as the Sheriff of Nottingham, Nicol Williamson (Excalibur) as Little John, Ian Holm as King John, Denholm Elliot as Will Scarlett, and Richard Harris as King Richard. I was too young to appreciate all the actors and the mature tone of the story (let alone the dark ending) when I first saw this film, but now I find myself wanting to revisit it more and more. 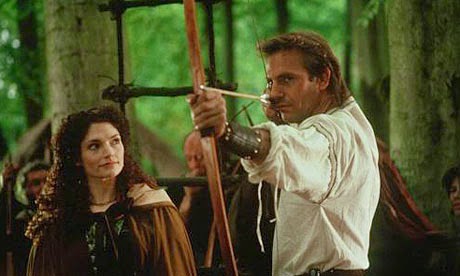 One of these days I’ll put into words exactly what this film meant to me when I saw it in 1991, but today is not that day. Robin Hood: Prince of Thieves is a flawed film, but I think it had its heart in the right place and it impacted me in a very special way. Director Kevin Reynolds has been responsible for several stories of a similar nature (The Count of Monte Cristo, Tristan + Isolde) and he strikes me as a filmmaker who has a genuine affection for this type of story because he keeps returning to it.

Much has been made of Kevin Costner’s casting and his inability to maintain any sort of an English accent, but this film more than makes up for it with a scene-stealing performance by the great Alan Rickman and with a supporting cast of English character actors famous for walking the boards of the Old Vic theater (pardon me, theatre). This is also one of those Morgan Freeman performances where he actually invests in the material, meaning it’s before 1997…finding a heartfelt Morgan Freeman performance after 1997 is like seeing a Bigfoot: some people claim to have seen one, but they were most likely drunk. American actress Mary Elizabeth Mastrantonio does about as good a job as Maid Marian as K-Cos does as Robin Hood, so they’re kind of made for each other. Sean Connery makes his second appearance in a Robin Hood film (third, if you count Time Bandits) with a cameo as Richard the Lionheart. All this, plus Christian Slater.

Probably the most important factor that I feel makes Robin Hood: Prince of Thieves special is the wonderful use of location filming in and around the English country, including Hadrian’s Wall, Highclere Castle (where Downton Abbey films), and several other surviving castles that dot the English countryside. Seeing some of the sights that are captured in this movie set me down the path to learning as much as I could about Britain and Europe, particularly between the Dark Ages and the late medieval period. It’s a path I’m still on, and I have this silly little movie to thank for it. 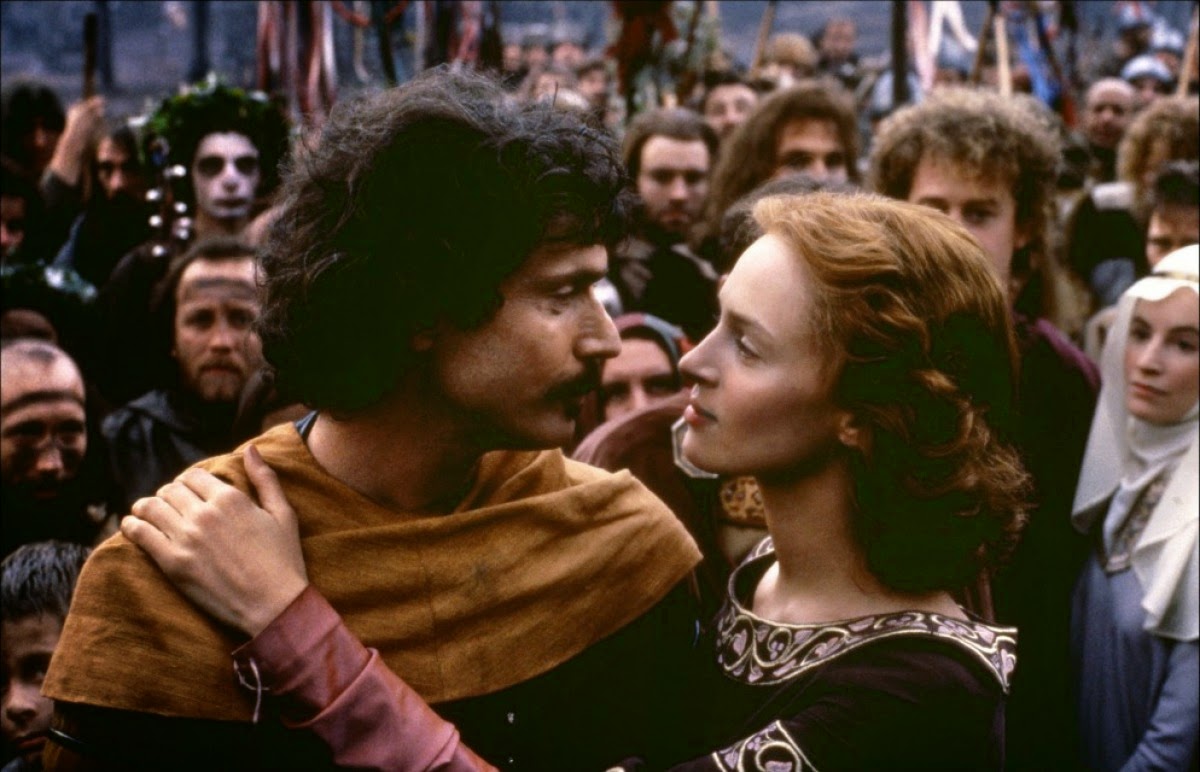 While Kevin Reynolds was filming in England for his Morgan Creek/Warner Brothers film, 20th Century Fox was making their own Robin Hood with English director John Irvin (Raw Deal, Hamburger Hill, casting mustachioed Irish actor Patrick Bergin (Patriot Games) as “Robin Hode” and Uma Thurman as “Mariane.” This whole thing takes on a decidedly authentic tone due to the fact that the director, writers, and producers are all either English or from New Zealand and that the movie was shot in north-central England where the story of Robin Hood traditionally takes place, rather than around London or in studios.

Fox’s Robin Hood story feels a little bit darker and more realistic than most of its peers, but it also feels a little bit like the Errol Flynn version, which is comforting. Both leads give solid performances, to the point that I thought Uma Thurman really was English until she started doing press for Pulp Fiction, at which point I realized she was faking the accent in this movie. John Irvin’s Robin Hood ended up airing on the Fox network in America in 1991 a month before Robin Hood: Prince of Thieves, but was a theatrical feature in other parts of the world. It’s a shame it never got a chance to stand on its own because it never really stood a chance against the bigger budgeted Warner film. Like Rob Roy vs Braveheart in 1995 or arguably even Deep Impact vs Armageddon in 1998, this might have actually been the better movie, depending on who you ask. At the very least, it’s worth a watch. 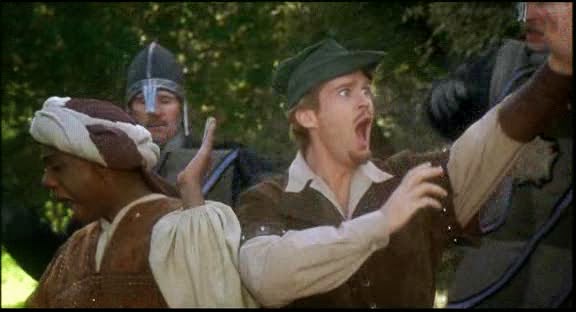 What can you really say about this movie? It’s probably not one of Mel Brooks’ better movies, and yet, like all other Mel Brooks films, it’s completely watchable and worth your time. Borrowing elements from all the previous filmed incarnations of the story (but most heavily from Prince of Thieves), Robin Hood: Men in Tights manages to lampoon the timeless story in a way that feels familiar and fresh at the same time. We get Cary Elwes after he was the Dread Pirate Roberts but before he sawed his own foot off, Dave Chappelle years before he had his own show, Amy “Wasn’t She On Wings” Yasbeck, and Richard Lewis. I give any shortcomings in this movie a total pass because of how much Mel Brooks is responsible for shaping the culture of comedy. 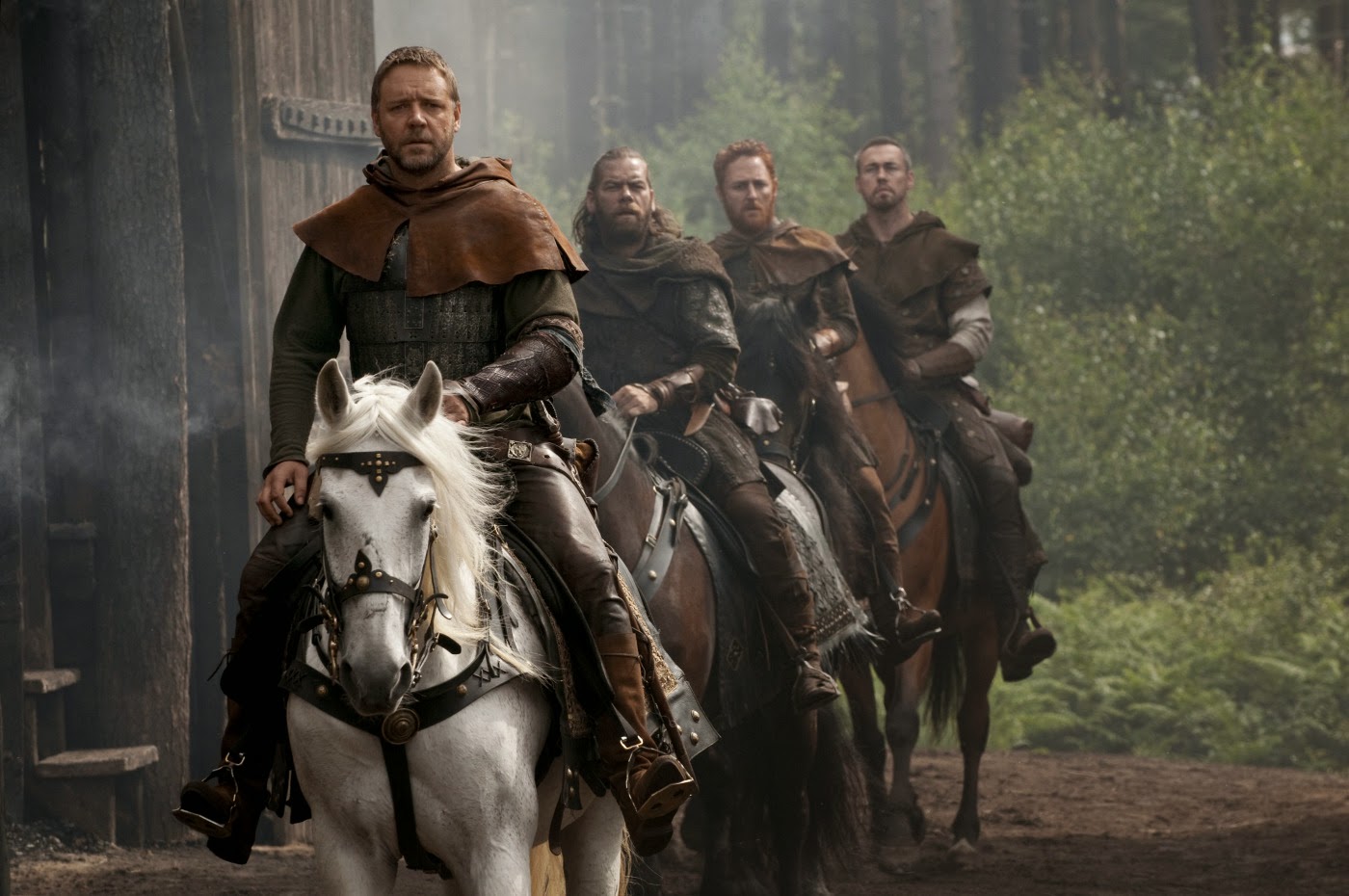 Unless you count the universally panned, low budget (200,000 Euros) 2012 film Ghosts of Sherwood with Tom Savini and Kane Honner, the last major entry we’ve seen in the cinematic saga of Robin Hood remains Ridley Scott’s film starring Russell Crowe and Cate Blanchett. I like this movie, but I wish there was less screaming and over-acting. I also wish it didn’t take itself quite so seriously. Who knew medieval England was such a humorless place, what with all the disease and injustice and poor living conditions and…nevermind. I just wish Ridley Scott could lighten up a bit, but that’s not really what Ridley Scott is good at, nor is that what the bulk of the movie-going audience goes to the cinema to see. And hey, if you want to drive yourself crazy, you could always speculate about what his brother the late Tony Scott could have done with the story.

Like several of the entries I’ve written about here, the main appeal of this version for me is the supporting cast. Russell Crowe holds little interest for me as a leading man, but I’ll watch Cate Blanchett (with or without elf ears) in anything, and Mark Strong makes for a great bad guy. Danny Huston delivers a really interesting take on Richard the Lionheart, and we even get stuff from Max von Sydow and William Hurt.

A large part of the marketing for this movie dealt with the script being based on new historical discoveries pertaining to the “real” Robin Hood. The History Channel even aired a special to coincide with the release of the film. I have that History Channel special on DVD and there really is no new historical information about Robin Hood other than the idea that there may have been a figure (or several of them) in the recesses of medieval English history that opposed the rule of the English monarchy and became a public hero because of it. That’s not a new notion; it’s been around for several decades, at least. But Scott apparently delved into all this research to ground his film in as much reality as he could, with accurate dress, jobs, behaviors, and societal roles, even without any clear-cut evidence of the hero himself. That’s more than a lot of movies have done, so I’m not knocking it; actually, I admire it. I just wish the movie had a little more twinkle in its eye.

But then again, that’s the great thing about Robin Hood. There’s a story for all seasons and an interpretation for all tastes. You know what mine is, and maybe yours is completely different, and might not even be on this list. As long as we have movies, we’ll have Robin Hood on the screen. There are dozens of versions out there that I haven’t even seen yet, which reminds me…I better get busy.
Posted by Patrick Bromley at 12:00 PM