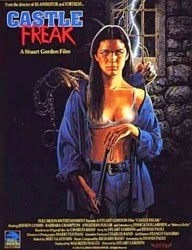 Celebrate #ScaryMovieMonth with one of Full Moon's finest films!

The vast majority of the Full Moon catalogue (and Charles Band's Empire Pictures before it) is comprised of self-aware B-movies -- titles that know they're cheap and maybe even a little silly, but are eager to please and relish the opportunity to be fun. Every once in a while, though, an old-school serious horror movie would sneak through, whether it was Charles Band's monster love story Meridian or Stuart Gordon's remake of The Pit and the Pendulum. That this pretty much only happened during the days of Full Moon's partnership with Paramount is telling about the amount of ambition and experimentation a higher budget affords.

Full Moon movies were rarely as classy (classy, that is, for a movie in which a monster eats a woman's boob) or as dramatic as 1995's Castle Freak, which reunites director Stuart Gordon with his Re-Animator/From Beyond stars Jeffrey Combs and Barbara Crampton, playing a married couple who inherit a castle in Italy and move there to leave their old life behind. Both are still grieving the death of their young son, who was killed in a car crash caused by Combs while driving drunk; it's the same accident that blinded their daughter Rebecca (Jessica Dollarhide). Pain and resentment continue to hang in the air as Combs' character makes mistake after tragic mistake, turning back to alcohol and at one point bringing home a prostitute for companionship. What the family doesn't know is that they're not alone in the castle, which also plays hosts to a disfigured monster who has been locked away in chains for years. He is (or was) the son of the duchess who owned the castle, imprisoned, beaten and tortured as punishment for the duke's infidelities. And now he's on the loose.

And therein lies the great tragedy of Castle Freak, a movie that's as heartbreakingly sad as it is horrifying. Like Re-Animator and From Beyond, Castle Freak is also based on a story by H.P. Lovecraft called "The Outsider." It is a very loose adaptation, retaining the idea of a monstrous man trapped in a castle for his entire life but relegating him mostly to the background. At its heart, Castle Freak is a film about the dissolution of a marriage. The monster is just a metaphor. Yes, he's a metaphor that bites off boobs and terrorizes a child in her underwear, but a metaphor still the same (not in the movie, mind you; in the movie, he's a very real, very dangerous monster). Besides, what would a Stuart Gordon movie be without sex and horror crossing paths? 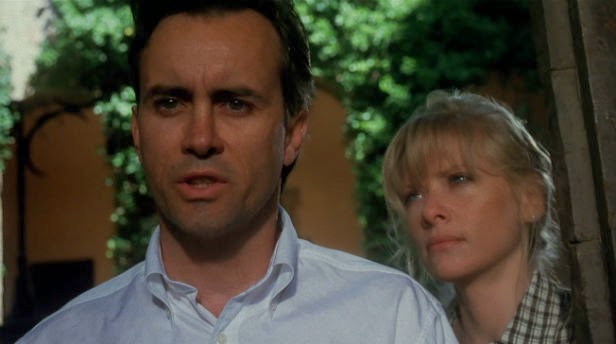 The monster is the physical manifestation of the Sins of the Past revisiting us and making us pay for our mistakes -- in this case infidelities both past and present. It is a constant reminder that the past cannot be hidden away and forgotten; no matter how far down they try to repress the tragedy of their mistakes, they will always find a way to come back. And probably kill them. Combs and Crampton are both very good in the movie, tapping into their characters' pain in a very raw way without being able to fall back on the comedy of Re-Animator or the outrageousness of From Beyond. I won't go so far as to say they've never been better, but they are very, very good in roles that represent a huge departure for both.

As sad as their story is, it's only half as sad as the monster's. That's part of what makes Castle Freak great -- like Frankenstein, the script (by regular Gordon collaborator Dennis Paoli) is willing to make the monster a tragic figure, one that's mostly a result of its own origins. It spends most of the movie howling in constant pain, sometimes as a result of physical trauma (he breaks his own thumb to get free from his shackles) and sometimes it's just the pain of being alive when it shouldn't be. We feel even more conflicted in Castle Freak because while he is pitiable, the monster is genuinely monstrous; once he breaks loose, he commits some horrible murders. That includes the aforementioned boob eating and killing of a prostitute in a scene that's grisly and gory and somewhat out of step with the rest of the movie. While it's the only instance of such brutal violence, there's something about it that's effective. Maybe it's because Castle Freak is a movie of extremes -- the physical violence has to match the emotional violence, I suppose. 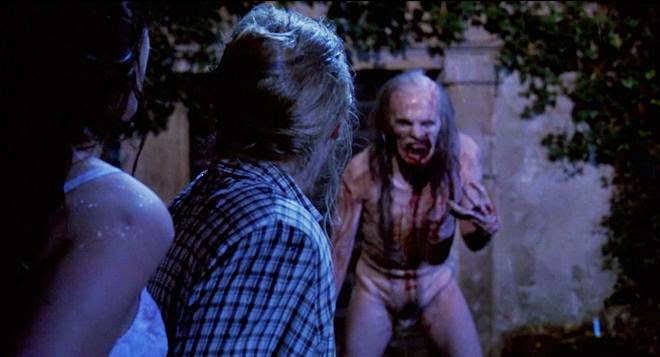 From Dolls to Robot Jox to Castle Freak, Stuart Gordon made many of the best movies produced for Charles Band (first through Empire, later through Full Moon). His work on Castle Freak shows a new side of him as a filmmaker; without the splatstick laughs or over the top effects of some of his previous efforts to fall back on, Gordon instead focuses on the domestic drama. Yes, it's a horror movie and a great one at that, but one that's entirely rooted in the emotional traumas of its characters. The monster is almost an afterthought...that is, until he isn't.

The locations only add to the film's effectiveness. Shot at Charles Band's actual Italian castle (that served as Full Moon's studios for a short time), the gothic atmosphere drips off the screen -- it's the kind of authenticity that can't be faked or bought. It also heightens the sense of "otherness" that pervades the movie: the monster is cut off from the world just as Americans Combs and Crampton are, strangers in a strange land. The monster is a constant reflection of the human characters and vice versa.

Just a few days before rewatching Castle Freak with my wife, we finally sat down to start watching American Horror Story, which I keep hearing good things about but have avoided because I'm not a fan of creator/producer Ryan Murphy. Needless to say, it is the show I thought it was, mostly because of Murphy's touches; I don't know at this point if we will continue to watch (and yes, I know each season is basically a reset). I bring it up because the pilot of "Murder House" bears a strong resemblance to Castle Freak. Like, a strong one. It's about a couple that moves into a new house with their daughter, reeling from a tragedy as the wife learns to trust the husband again after he made a terrible mistake. They discover there's more going on in the house than they first realized. Maybe it's just a coincidence that the show is so much like Castle Freak; as the movie is still underrated and little-seen, there's a chance of that being the case. Maybe it's a deliberate tribute, seeing as how producer Ryan Murphy loves making those kinds of overt references. Maybe it's deliberate plagiarism. Whatever the case may be, Castle Freak is the superior of the two. It's one of the best movies in the Full Moon catalogue and creeps higher up on my list of Stuart Gordon's best each time I revisit it. 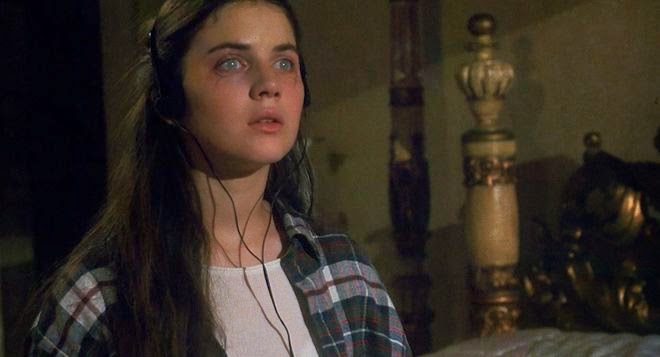 Though it was released direct to video in 1995, I was lucky enough (along with JB and Mike) to see what was touted as the first-ever 35mm theatrical screening of Castle Freak a few years ago. It's apparently the only print in existence, owned by Charles Band himself. It's too bad more people don't get to experience the movie this way, as it deserves to be seen on the big screen. It's beautifully shot for a movie with this much (intentional) ugliness. It's a sad and haunting movie about lives that were destroyed long before a monster started chasing people around; even the monster is a product of a life destroyed. This is probably the most "adult" movie Full Moon ever produced, and while I'm sad that there aren't more like it, that just makes Castle Freak even more special.

Buy Castle Freak on Blu-ray or DVD through these links and support F This Movie!