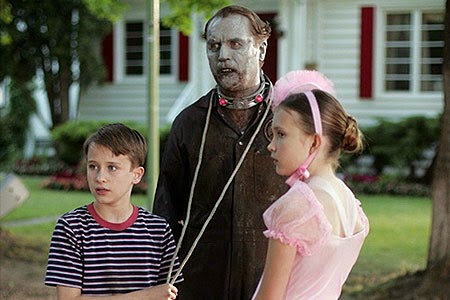 All words leading to...ZOMBIE! As I was choosing my daily Scary Movie Challenge flicks, (NEXT YEAR I WILL HAVE A PLAN DAMMIT!), I noticed I was inadvertently watching more and more films about zombies. This is odd, as it has never been my topic of choice. Or at least I thought so, but perhaps Scary Movie Month has taught me more about myself than I care to acknowledge. Maybe I have Fido in my basement. Don't judge me.

While a few of the films I watched were hit or miss, I figured I would take you on my journey and recommend my favourites so you can try and squeeze in them in before the end of the month. Which is probably tomorrow. So stay inside and get your zombie fix on. Because 'tis the season! 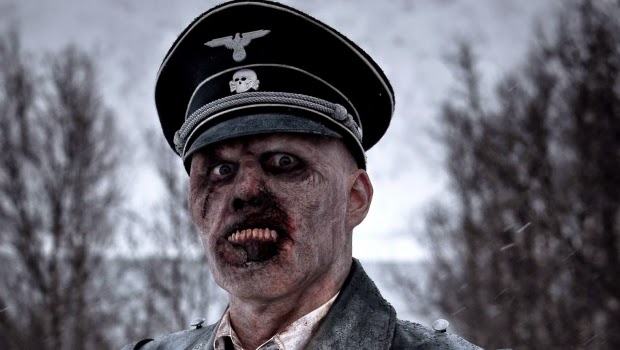 First up, I sought out anything horror that was tied into World War II. I am a huge history nerd, particularly the Nazi era (era), and figured why can't I find something that satisfies all my nerdy categories? BAM Nazi Zombies will do quite nicely thank you very much.

Being a Nazi Zombie virgin, how was I to know this was a thing?! Of COURSE it is. Ask and you shall receive, the good, the great and the “what the fuck did I just watch?!” I watched three in quick succession: Dead Snow (2009), Blood Creek (2009) and War of the Dead (2011), and the only one I will really feel the need to mention is Dead Snow, directed by Tommy Wirkola. The other two were bordering on okay, but Dead Snow stuck with me and I was excited to start talking about it the next day to anyone who would listen. (Which was essentially me talking to myself, because who in the real world likes stories about Nazi Zombies! I feel much safer in my F This Movie! Scary Movie Challenge world, where Nazi Zombies are the norm.) I saw this the night before Patrick announced F This Movie! had been quoted in the Dead Snow 2 trailer, and while I thought the film was ok, I think it was the idea of the double pairing that just had me smitten from the word go. While the film is EXTREMELY slow in some parts, and the token film nerd is beyond annoying with all his stupid film related jokes, I loved when it was in full swing, and some of the humour hit home. My favourite part of Dead Snow? Finding out that there is a Dead Snow 2.

Dead Snow zombies: Fast, cursed and out for revenge

I will COMPLETELY skip over a few and just make note of this: Quarantine 2 is the biggest waste of time this month and I feel like an asshole for ruining this piece with the mention of it's name. I will never take a suggestion from Netflix again. 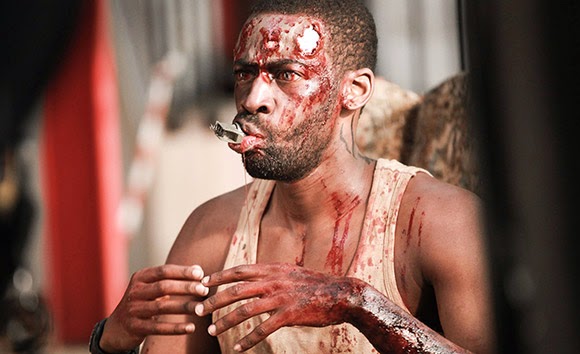 Cockneys. Zombies. And the elderly. Now if that doesn't sound like the ultimate triforce of awesome, then I don't know what does. Cockneys vs Zombies (2012, directed by Matthias Hoene) starts us off with a bank robbery gone wrong, but, never fear, the zombie apocalypse should ensure a safe getaway. I came into this blind, never having heard of it, and therefore knowing zilch about it. My sights were set on something zombielicious to entertain me for an hour and half. It was okay, nothing I felt compelled to rave about, a bit too much old man profanity, but one specific scene that had me laughing for it's entirety.

Cockneys vs Zombies zombies: Slow, like old man with a walkerrrr sloooowwwww.

Next, I opted for another foreign zombie film, this one out of France. Mutants (2009, directed by David Morlet) focuses on the relationship of a husband and wife and the three day timeframe as the man slowly loses his body and mind to the mutation they were attempting to hide from. I really, REALLY enjoyed this film, as it centers on holding out for a hope of a cure, and the gradual realization that there might not be an escape. Both the leads perform incredibly well and it was heartbreaking to watch as the man (gradually) loses his mind and himself as he is consumed by the zombie he is to become. Francis Renaud's portrayal of a husband who is well aware of what he is slowly mutating into is heartbreaking and ferocious and I couldn't help but feel sorry for him. (Even though it's a horror movie and I couldn't wait for the gore to begin!) 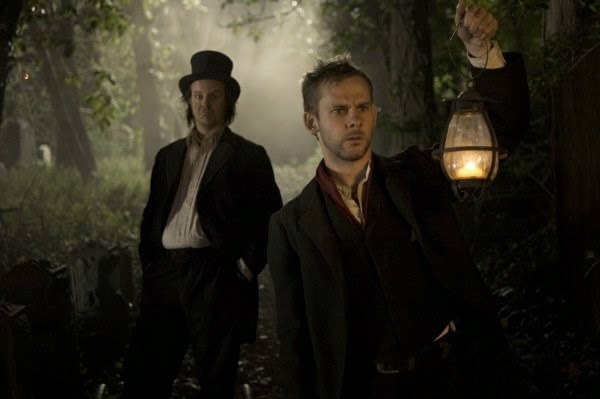 Next up, I Sell The Dead (2008, directed by Glenn McQuaid) brings us back to the good ole 1800s when grave robbing and beheadings were the norm, and the dead that were sold found new life as, yep you guessed it, zombies! Hooray! Also Ron Perlman does his thang. Need I say more?

I Sell The Dead zombies: Human speed and capable of comedic fear

A couple more notable zombie(ish) flicks (I say “ish” due to their zombifying process being neither a curse, nor a virus, but transferred by slimy slithery slug wormies, generally via a mouth orifice).

Slither (2006, directed by James Gunn) Is Grant Grant (Michael Rooker) trying to get you with his two probing chest penises? Never fear, he has other ways to keep the town in line. Just cover your mouth.

Night of the Creeps (1986, directed by Fred Dekker) I will never look at alien slugs the same way. Especially if they can make your face explode. Again, cover your mouth. 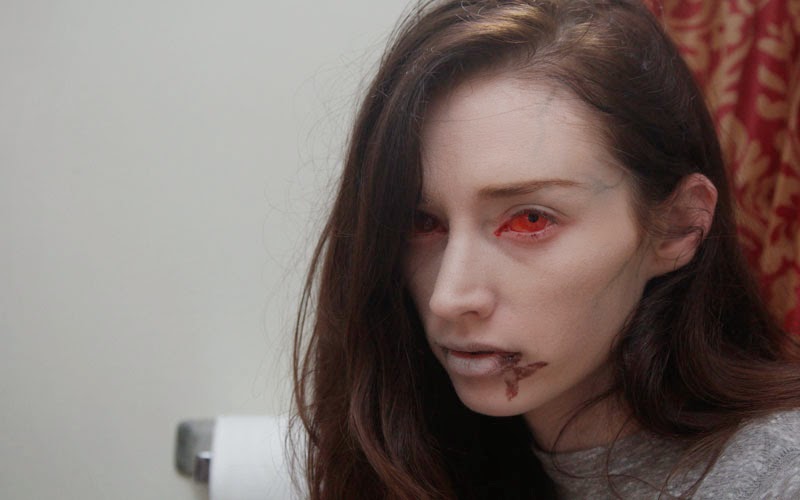 And finally I get to the only title in this piece that was a re-watch. If you are a fan of the site then my mentioning this title shouldn't be a spoiler: Contracted (2013, directed by Eric England). Quite easily my favourite of all the films watched this month, I am a HUGE fan and promoter. It was only my second viewing and I loved it even more than my first experience with it. What's more, not only do you get to experience the film, you can follow it up with Patrick's chat with the director in this podcast from earlier in the year!

Contracted zombies: It's not a spoiler if you've seen it.
Posted by Patrick Bromley at 2:00 PM