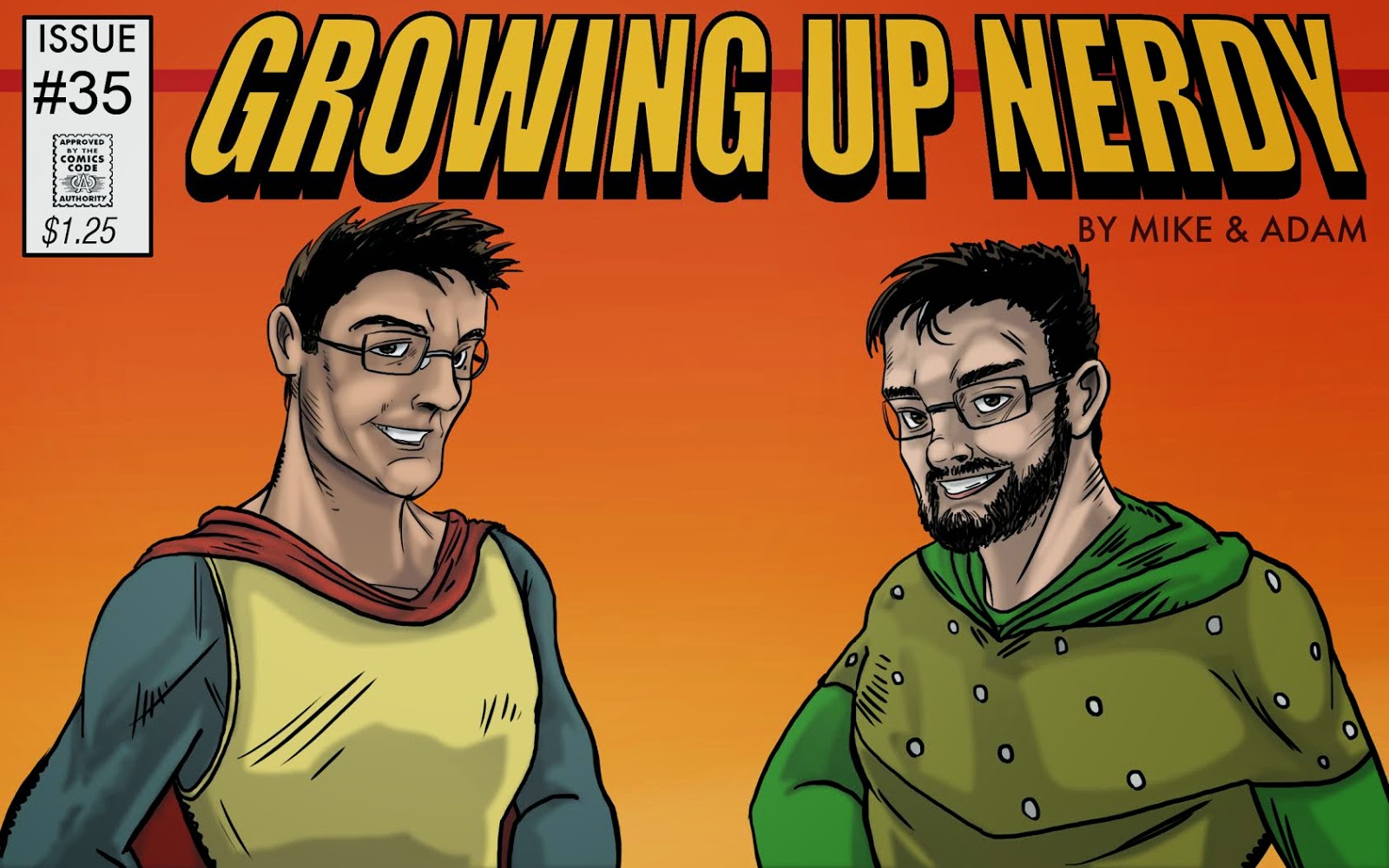 I found myself wondering through a comic store the other day and I saw so many different types of games all over the place. There were even a few guys playing a game in the back of the store. I was wondering if you could help me make a bit of sense of all these nerdy games?

Mike: I’ve always liked the idea of nerdy games, or role playing games, but I’ve never actually been involved in one for more than a day or two. I’ve dabbled in several over the years. Like…

Magic: The Gathering, a trading card game from Wizards of the Coast, is the game that I keep telling myself I should give another shot. As Adam and I have stated over and over in this column, we used to spend every waking moment of our lives at Dreamland Comics in Buffalo Grove, Illinois, when we were teenagers. At the height of our time at Dreamland, Magic: The Gathering had launched and some friends of ours got in on the ground level, while Adam and I neglected the game in favor of doing more important things with our lives, like checking the spine of the latest Gen13 issue to make sure IT WAS PERFECT. Magic became a phenomenon and arguably still is. New expansion packs are still being released and Magic tournaments take place at comic book store every weekend all over the world. Hell, the guy that worked at the Pizza Hut across the street from Dreamland was so into it that we used to trade him packs of our Magic cards for pizza and breadsticks. It was nerd currency. Adam and I eventually decided to give the game a shot and we each bought a starter deck. I thought the game looked cool as hell (still do), mainly because it tapped into the fantasy genre, a genre I’m only now admitting to have a deep rooted love for. Our friends Charlie and Matt taught Adam and I the basics one night and we played our first game against each other. Like our first sexual experiences (for once, that was not with each other), our first Magic: The Gathering game was awkward, confusing at times, and ended sooner than we’d hoped. Still, it was fun and we promised each other we’d get good and play it more often. That was the last time I played Magic: The Gathering.

1995 saw the release of Marvel OverPower, a collectable card game. Like Magic, the idea of OverPower appealed to me, but also like Magic, I bailed on it pretty quickly. While it was fun to build my team of superheroes to beat up my opponents team of superheroes, eventually I became more interested in collecting the cards then actually playing with them. 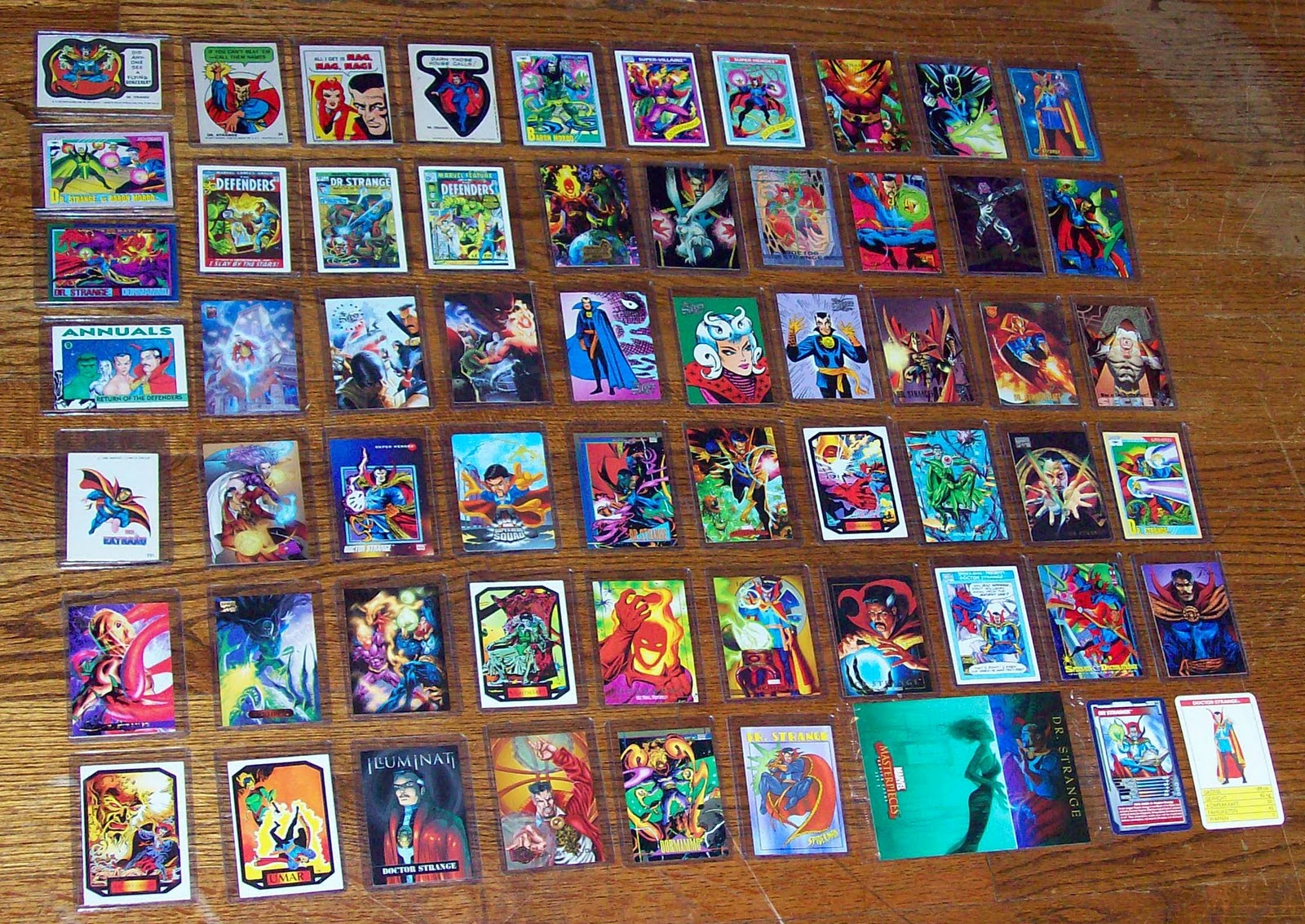 Adam will expound on HeroClix more than I ever could. I’ve played it a few times, it was fun, but I was way more interested in the game pieces than the game itself.

Warhammer is a fantasy (there’s that word again) tabletop wargame, a game played with miniature figures. This is another game that sold well at Dreamland and was composed of Orcs and Elves and the like. The pictures on the boxes and the figures themselves intrigued me, but I was way too intimidated to play it. I knew no one that knew how it was played, and, to be honest, I knew no one that wanted to know how it was played. Before Dreamland sadly closed its doors, I grabbed a Warhammer set off of the rack in the hopes that I would one day learn to play it. Instead I sold it on eBay a few years ago to help pay for my trip to San Diego Comic-Con.

I could be wrong about this, but I feel like I was just a little too young to get into Dungeons and Dragons. It would’ve helped if my older brother had liked it and could have introduced it to me, but I can only assume he was too busy having sex and a social life to ever fall for the games charms. 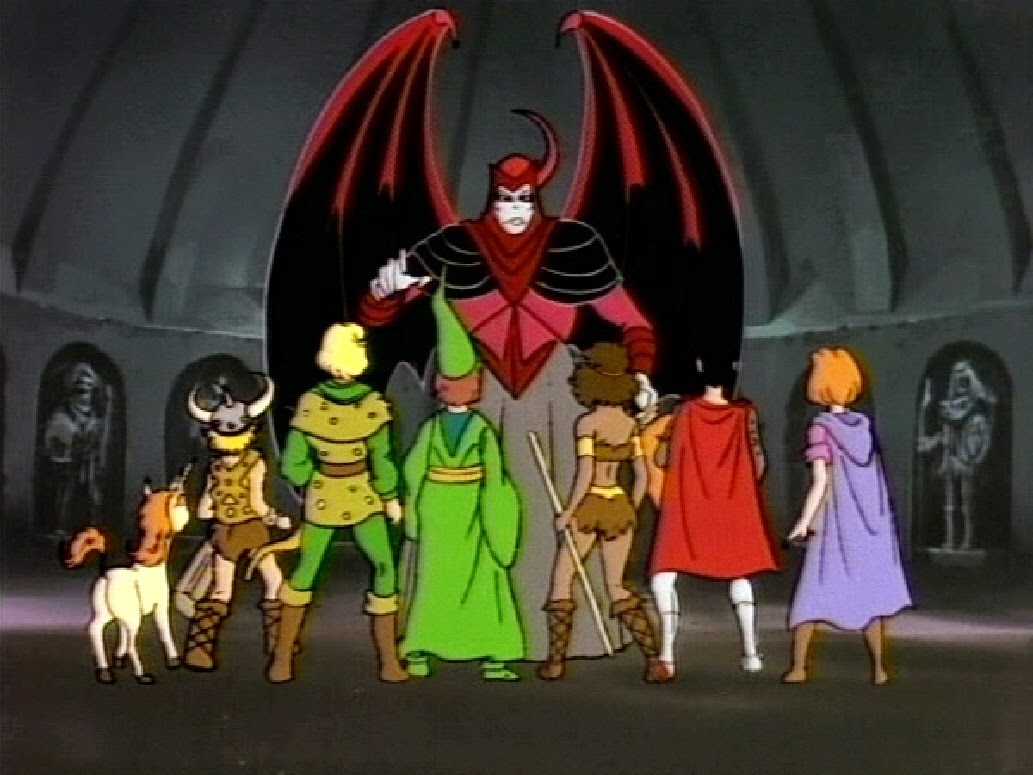 Adam: There are so many games out there. Walk into any average sized comic book store and you’ll see little boxes and figures tucked away, just waiting to be bought. I guess the most popular and most stereotyped would be Dungeons & Dragons, which I unfortunately have never had the opportunity to play. I mean, I really loved the 1980’s cartoon Dungeon’s & Dragons (did those kids ever get back home?), but I can honestly say in my vast network of nerd friends, none of them have ever been D&D guys.

There are other ones out there. If you are a child of the '90s like myself, I’m sure you can remember two or three kids sitting at a cafeteria in high school sitting playing Magic: The Gathering. 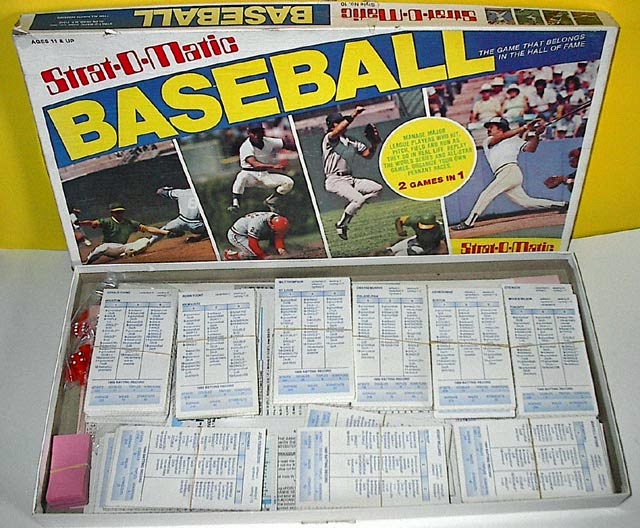 My father-in-law recently got me playing Strat-o-matic Baseball. Never heard of it? You and about 99% of the world have that in common. Things were different pre-videogames. I guess my father-in-law in college would get together with some guys in college and play Strat-o-matic Baseball, which is essentially a dice game where you roll the dice and the number rolled is what happens in the game (example: a 5 or 6 is a hit, 4 is a home run, etc). It’s all based on actual players and their actual season statistics, and I’ll be the first to admit it’s fun on a rainy afternoon.

I’ve tried a lot of the other games through the years, from Warhammer to Marvel Comics Roleplaying Game, but only one of them has really stuck with me is HeroClix. HeroClix was developed in 2002 and has exploded in comic stores across the country because of its various appeals. HeroClix are essentially tiny 2 inch tall (on average) plastic figures on a base. The base is a rotating disc and every time your character is damaged you spin the dial, which, in turn, changes your “powers.” The game itself can be really fun. Buying several HeroClix and putting together your teams and playing against each other is fun without the time commitment required of something like D&D. I’ve got several friends that get together to play HeroClix for a few hours, trying different themes and different characters, really having a good time with a strategy game. 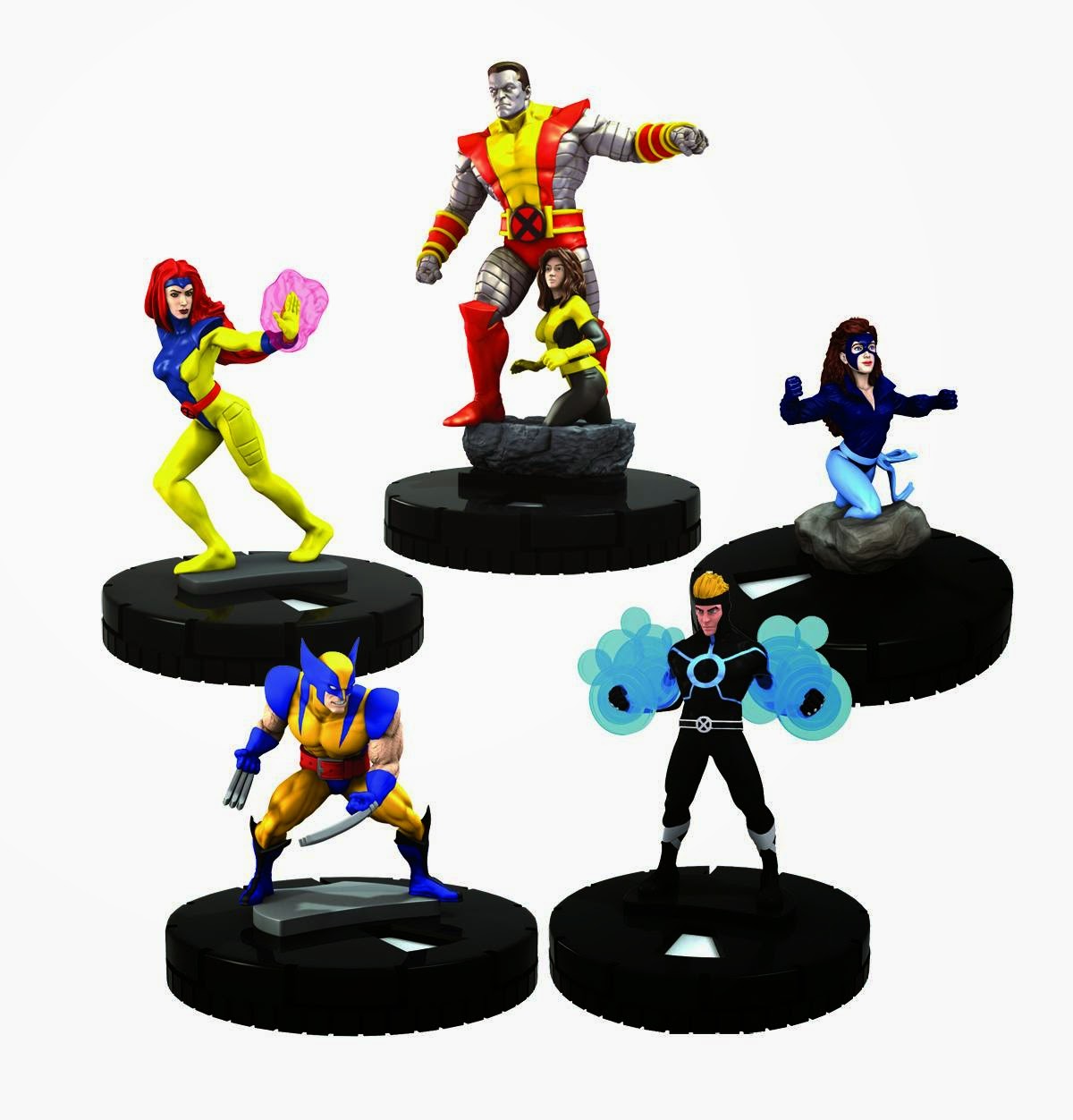 The real appeal of HeroClix -- and the reason I think they took off the way they did -- is the collecting aspect of the entire game. You see, each little figure comes in boxes that are completely random. Essentially, when you fork over the $10 for a box of 5 HeroClix, you don’t know what's inside. The HeroClix are placed in boxes and some are very rare, some are common, and some are more powerful or weaker. Guys who are really into completing a collection or winning games will pay large sums of money for certain pieces and figures that can be very valuable based on the character (The most expensive sale of a HeroClix figure I’ve heard of was a Spectre for $1800. The price has come down A LOT).

It doesn’t just stop with comics, either. Pretty much every major sci-fi movie that gets released in theaters now has a HeroClix tie in. When Pacific Rim came out a few years ago, you could buy sets that gave you either random Kajiu or Jaegers and build your own teams. The Lord of the Rings and Hobbit HeroClix are incredibly popular and have their own maps. HeroClix have gotten so popular that if you walk into your local comic store, they probably have a HeroClix night. There is even a National Championship with the US winner bringing home over $10,000 in prize money last year. HeroClix has become its very own monster and has some die-hard fans. There are HeroClix podcasts and unboxing videos have become a thing. Essentially in an “unboxing” video, a guy buys some HeroClix boxes and opens them while filming it. Make fun of it all you want, but some of these videos have over 15,000 views.

Out of all the nerd games, HeroClix is my drug of choice. I’ll admit to spending plenty of my hard earned cash on the little plastic figures. They’re fun. Not only is the game enjoyable, but the little sculptures have become fantastic through the years. I’d probably have to say that my favorite part is that a HeroClix set is all done to scale. If you have a Wolverine, he’s shorter than the Hulk, and if you have a Doctor Manhattan or Galactus, he will tower over the other characters. Unless he's a cloud.

I guess we can all call this my “Coming Out” party. I’m a HeroClix fan. Yes folks, I’m that nerdy.
Posted by Patrick Bromley at 5:00 AM