What Happens to Comedy Stars? 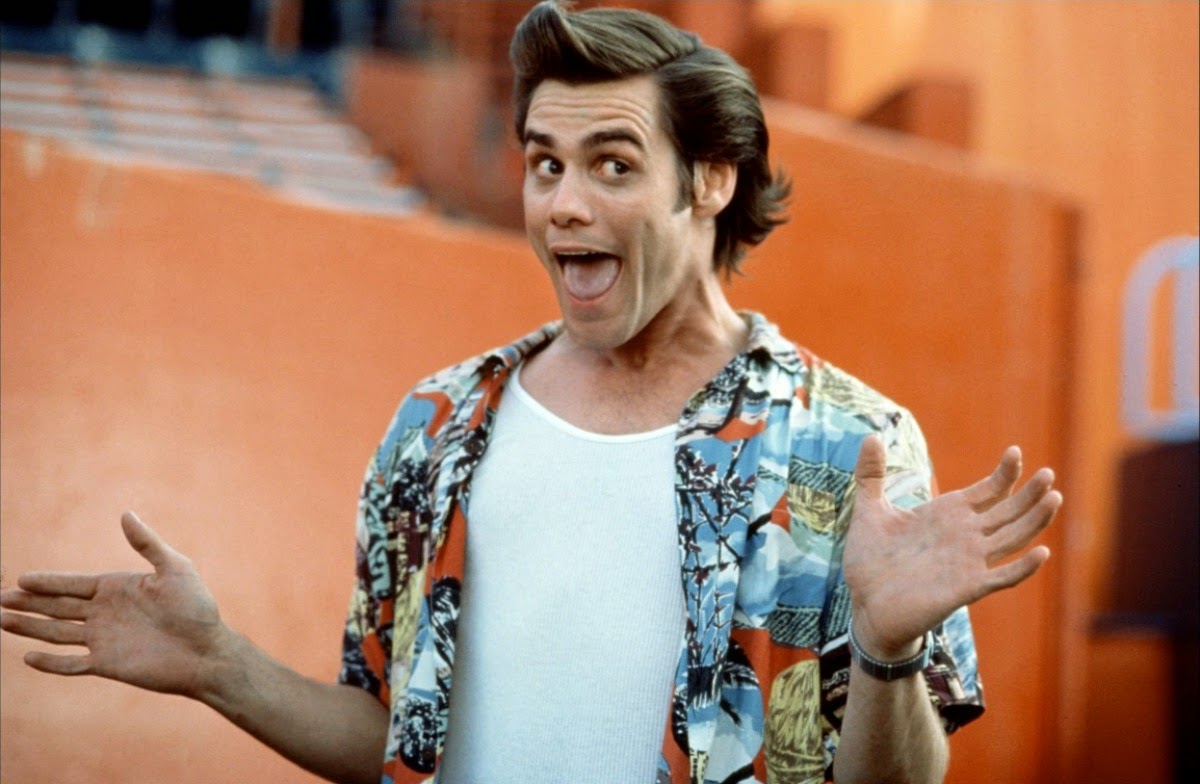 "What kind of clown are you?"
"The crying on the inside kind, I guess." - Bill Murray, Quick Change


This week marks Jim Carrey's return to the top of the box office with Dumb and Dumber To, a sequel to Dumb & Dumber that reunites him with co-star Jeff Daniels and directors Peter and Bobby Farrelly nearly 20 years after the fact. It's a terrible movie, one that's ill-conceived on every level and stands as a reminder that Carrey hasn't made a funny film since the The Cable Guy in 1996; a case could be made for Liar Liar, which has its moments, and Me, Myself and Irene, but even that was 14 years ago. He's been a comedy star for 20 years and making terrible comedies for roughly 15 of those years. This is not uncommon for comedy stars.

Sitting through Dumb and Dumber To and trying to think of anything but a noose quietly slipping around my neck, something occurred to me. Why is it that the funniest films of nearly every major comedy star of the last 50 years come at the beginning of their movie careers? Note the distinction of "funniest," not "best." Bill Murray has made some great movies in the last decade, but most of those aren't all that hilarious. Except Hyde Park on Hudson. That shit's a gas. 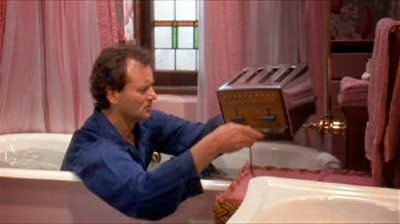 Think about it: Steve Martin's funniest movies, The Jerk, The Man with Two Brains and Dead Men Don't Wear Plaid, are three of his first four starring vehicles (the fourth, an American remake of Pennies From Heaven, isn't a comedy). Jim Carrey's funniest are all among his first four or five efforts: Ace Ventura: Pet Detective, the original Dumb & Dumber, The Cable Guy. Adam Sandler was finished after Happy Gilmore, his second film as a comedy star. Most of Eddie Murphy's best came early on, too: 48 Hrs., Trading Places, Beverly Hills Cop. Chevy Chase left Saturday Night Live to make a handful of shitty movies and then had a run of good ones that included Caddyshack, National Lampoon's Vacation, Fletch, and Spies Like Us. Since then? Garbage.

Steve Martin is actually an exception, in that he made a couple of funny movies beyond his first few: Dirty Rotten Scoundrels came out almost a decade after he became a movie star, and the great Bowfinger came out another 11 years after that. Bill Murray, too, since Groundhog Day came out in 1993, nearly a decade after Ghostbusters, his last great comedy (you fans of Scrooged and What About Bob? can keep them). The theory doesn't apply to everyone, but more than it probably should.

Why is the shelf life of a comedy star so brief? Here are a couple of theories: 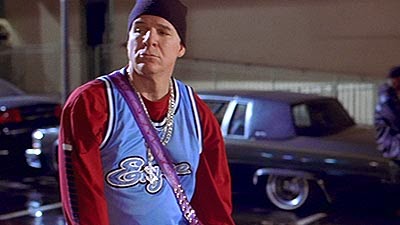 Theory #1: Comedy is a young man's game. Despite a 52-year old Jim Carrey's recent success with Dumb and Dumber To, there are very few comedy stars who remain relevant in comedy into their 40s or 50s. Why is that? Because comedy depends on novelty. We laugh at that which is surprising and unexpected, which is why the first films of any comedy star tend to be the funniest. It feels fresh and new and different enough from the last guy we all got excited about; we haven't grown overly familiar with the joke or with their particular style of comedy yet. The schtick gets old quickly with a lot of comedy stars, but either no one tells them or they fall into the trap of not being able to do anything else. The result is a comic actor past his or her prime still trying to do the same old shit we once liked to see them do, but it's merely an echo of what formerly worked. For proof of this phenomenon, check out Jim Carrey in Yes Man (his age made that much more obvious by casting him opposite Zooey Deschanel -- almost 20 years his junior -- in the romantic lead) or Steve Martin doing a hip-hop minstrel show in Bringing Down the House. 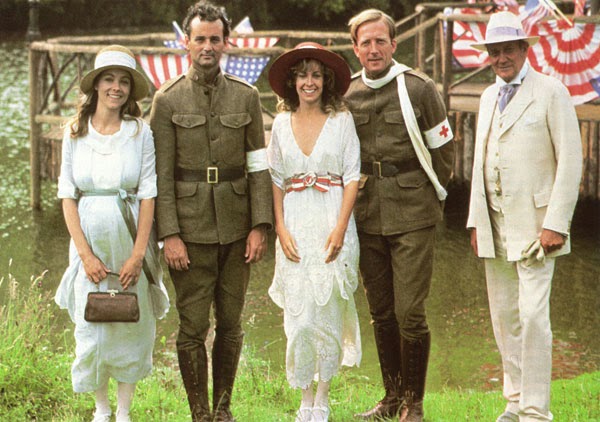 Theory #2: They want to be taken seriously as artists. Before too long, almost every comic actor gets an itch to do drama. Sometimes it's great and we get Lost in Translation or The Spanish Prisoner or The Truman Show. Sometimes it's not and we get The Razor's Edge or Grand Canyon or The Number 23. Comic actors often give some of the most interesting dramatic performances, perhaps because they're able to tap into a particular darkness (the same darkness that drives them to stand up on stage and beg an audience to laugh at them) or perhaps because they are actively working against our own preconceived notions about them. All of my favorite performances from Robin Williams were in dramatic films. Jim Carrey did good work in The Truman Show and Man on the Moon and Eternal Sunshine of the Spotless Mind. Bill Murray and Eddie Murphy have both been nominated for Oscars for dramatic, not comedic, roles; Robin Williams even won one. The desire to flex their SERIOUS muscles usually changes the career trajectory of comedy stars; even if they do go back to doing comedy, it lacks the confidence and anarchy of the early stuff. 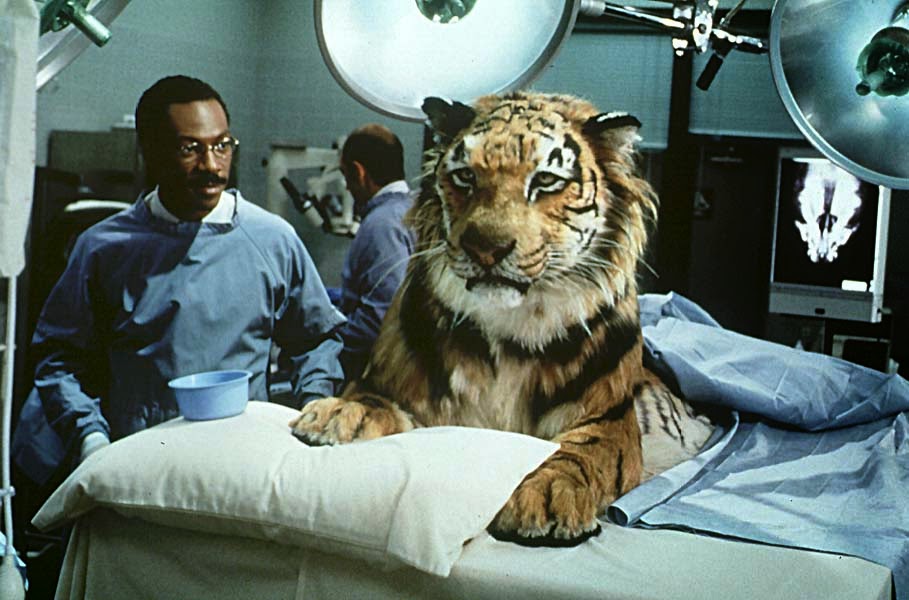 Theory #3: They want to make something their kids can see. Once a comedy star achieves a certain amount of success, it's less financially viable to continue making the kinds of edgy, R-rated or cult comedies on which he or she built a reputation. Why make a comedy only a few people can see when you can make a comedy everyone can see? This phenomenon typically gives way to a period of  "family" comedies: your Father of the Brides, your Clicks, your Flubbers, your Cops and Robbersons. It's not that these movies can't be funny; it's just that they usually aren't. Steve Martin is probably the biggest offender of this one, having starred in shit like Houseguest Housesitter and Bringing Down the House and TWO Cheaper by the Dozen movies and TWO Pink Panther remakes in addition to his Father of the Bride films (which, it should be said, are both fine).

Oh, wait. I just remembered Eddie Murphy, star of two Nutty Professor remakes and A Thousand Words and The Adventures of Pluto Nash and Daddy Day Care and two Doctor Dolittle remakes and Meet Dave and Imagine That. The 2000s have been a nonstop barrage of shitty family comedies from Eddie Murphy. He's got Steve Martin beat. 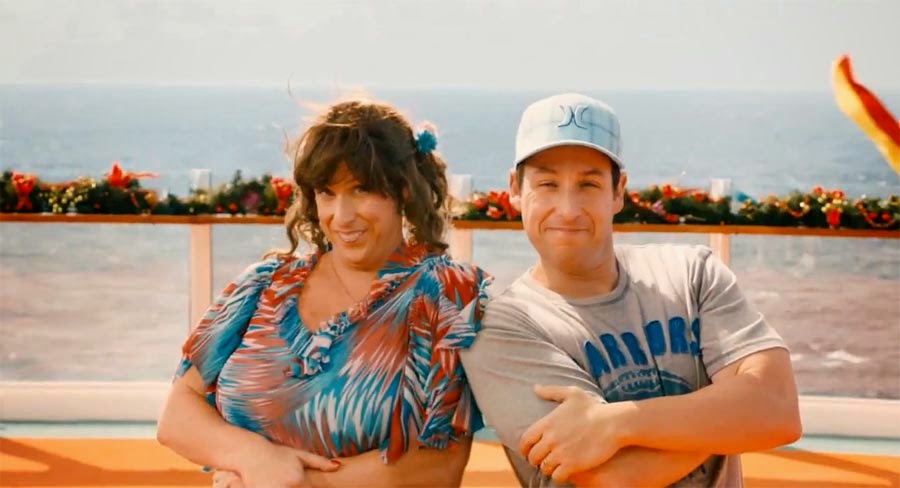 Theory #4: They no longer know -- or care -- what is funny. It's very likely that at a certain point, comedy stars lose touch with what used to make them laugh. Perhaps success has them too protective of their careers and they aren't willing to risk failure, which is what most great comedy needs to do -- it has to feel like a dangerous tightrope walk they are somehow getting away with performing. Perhaps they just assume that their fans have grown older with them and now have children and families and want something safe and forgettable they can rent on pizza night. This willingness to settle is not how art is made.

Or maybe they're Adam Sandler, who continues to make movies because fuck you.

Seriously, Adam Sandler does not give a fuck what's funny. I think he still knows. Every few years he'll surround himself with people who actually are funny (like Judd Apatow, even if the results of Funny People don't quite bare that out) or genuinely brilliant artists like Paul Thomas Anderson and make something wonderful and idiosyncratic like Punch-Drunk Love. He's not a dummy. He just doesn't fucking care. Under his Happy Madison Productions, he makes movies so that he and his friends can get paid to go on vacation and fuck around together, which audiences have consistently subsidized by making them massive successes. His most recent effort, Blended (in which he got paid to go hang out with his friends in Africa and look at Drew Barrymore), underperformed despite being not as horrible as several of his last few movies. Maybe that means we'll be spared too many more of his cynical, mean-spirited and totally fucking boring "comedies." Maybe it will light a match under Adam Sandler and force him to try again -- to engage with the material and to find something that challenges himself and/or his audience.

Or maybe he'll just make Paul Blart Mall Cop 2 and Joe Dirt 2, both due out in 2015 from Happy Madison Productions! 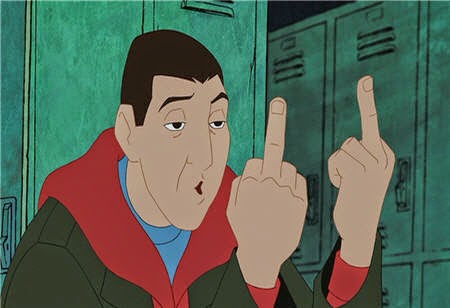