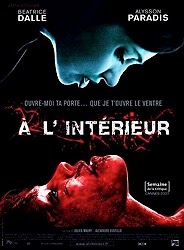 This has to be the bloodiest Christmas movie ever made.

Encouraged by a recent episode of Killer POV that named it a Christmas horror movie and emboldened by a recent viewing (several viewings, actually) of the French horror film Martyrs -- a movie I had previously been afraid of seeing -- that didn't scar me for life but instead turned out to be kind of good, I decided that my next "I'll Watch Anything!" column should be for another "extreme" French horror film, 2007's Inside (À l'intérieur). This is the movie I was afraid Martyrs would be.

As the film opens, Sarah, a pregnant woman (played by Alysson Paradis) is in a bad car accident that kills her husband. Months later, she is home alone on Christmas Eve, preparing to deliver her baby the following day. A stranger (Béatrice Dalle) shows up at the door and asks to use the phone. Sarah refuses, saying that her husband is asleep and doesn't want to be woken. The woman responds saying she knows he is dead. Still refusing to let her in, Sarah eventually calls the cops, who come and check the house but find no signs of the stranger. People begin dropping by the house: first Sarah's boss, then her mother and some more cops. What they don't know is that the woman has returned with a very specific goal, and she has some bloody surprises in store for everyone. 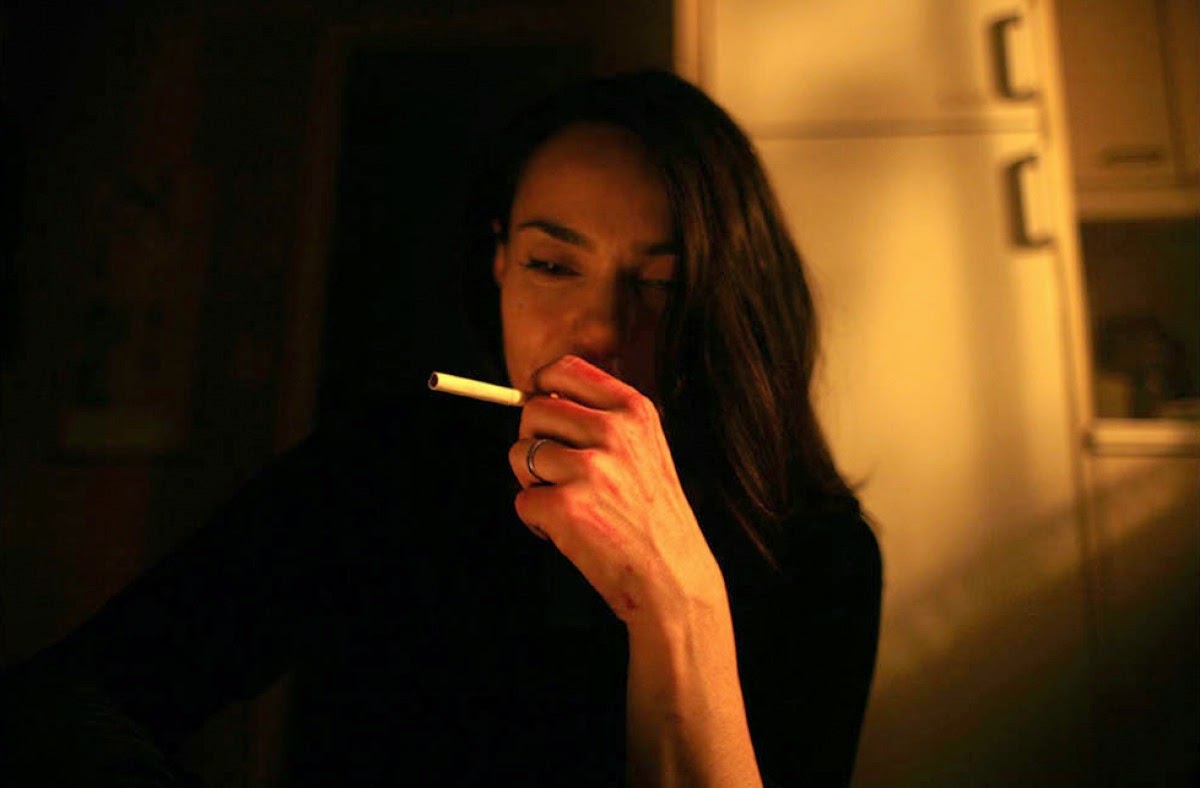 For as apprehensive as I was to see Martyrs because I was expecting 90 minutes of brutal, blood-soaked gore, that was not the movie it ended up being. It can be a rough watch at times -- particularly its last half hour -- but the violence mostly punctuated the set pieces and was in the service of some bigger ideas (what those are, exactly, I have yet to fully parse out). Inside is not that movie. After taking a few minutes to introduce its premise and settle in, the movie spends the next 75 minutes relentlessly playing out one savage murder after another. It is much more concerned with being a technical exercise in generating suspense: where is the strange woman hiding? What does she want? Who will she slaughter next? If I did not find the movie suspenseful, it is because I knew it could only end one of two ways. Because one of those ways was something I didn't even want to consider, the film became a waiting game for me: I wasn't on the edge of my seat wondering what was going to happen next, but rather was just waiting for the film to be over.

This is not to say Inside is a bad movie. It is not. At what it wishes to achieve, it is entirely successful. It's just not for me.

I say all the time that while we horror fans are the most passionate and devoted supporters of any subgenre, we all want different things. Inside offers a great deal of graphic violence, most of which involves a pair of scissors, and a whole lot of unpleasantness. These are not the things I want from horror. Doesn't mean they don't have their place, nor that they can't be put to great effect -- all it means is that I find it very difficult to connect with a film that relies upon them to the extent that Inside does. 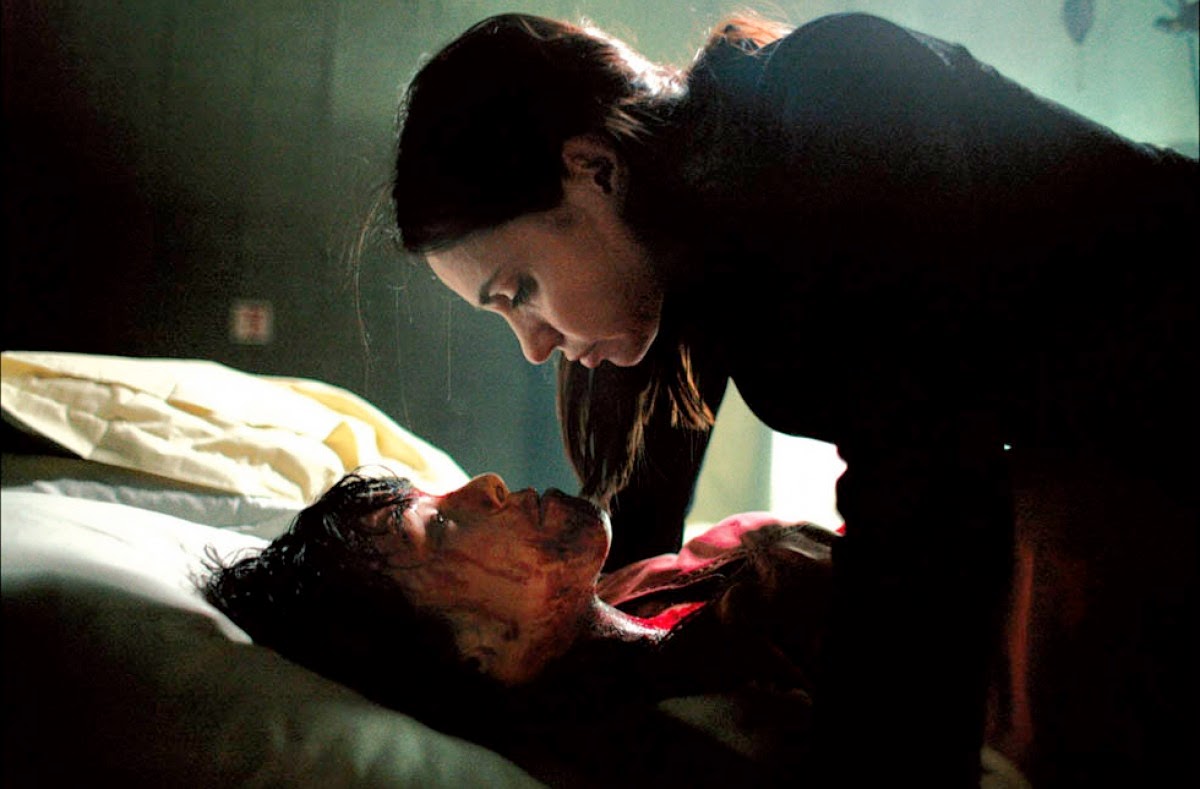 Not to keep using Martyrs as a point of comparison, but as it's the only other time I've waded into the waters of French Extremism, it seems applicable. Martyrs is a much messier -- and more ambitious -- movie, and even the horrible imagery it presents is usually in the service of some greater point it is trying to make. That's not the case with Inside, which can be accepted much more easily at face value in that it's about only what it is about. It gives the movie more focus, as it introduces a scenario and then plays that out to its conclusion for the remainder of the running time. There are no unnecessary subplots, no scenes that exist to deep the characters. A woman wants to get into a house and then possibly even further after that, and nothing is going to stop her. There's something about the way that new people (usually cops) keep showing up only to be horribly murdered that I would describe as being darkly funny if I thought this movie had any sense of humor at all. It does not.

There aren't things I can say are "wrong" with the movie. My issues are those of taste and tolerance, but that's on me. The only true flaw I can point to in the movie is the repeated use of a CGI baby, presented in utero as it reacts to things happening on the outside. The effect does not work, and each time directors Julien Maury and Alexandre Bustillo cut to it (almost always during the most intense moments) its artifice breaks any tension they were able to establish. It is one thing to draw us in with visceral suspense, but that bond is severed every time we are bluntly reminded that this is only a movie. It's only a movie. It's only a movie. 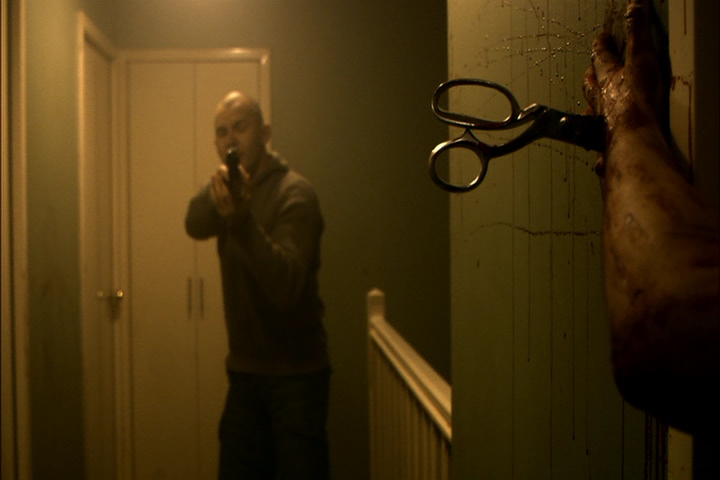 I am not bothered by violence. I've actually said on more than one occasion that I can have a lot of fun with movie violence (it's a necessary evil when you love both horror and action movies as much as I do). But there is violence that is stylized and potentially entertaining and there is violence designed to punish both the characters and the audience. That kind of violence makes up the bulk of Inside's running time: stabbings, slashing, eviscerations all shown in as graphic of detail as possible. Maury and Bustillo clearly subscribe to the idea that horror movies should be horrifying; unfortunately, what they find horrifying is limited to the number of ways the human body can be penetrated by scissors. I understand why people might respond to it, even if I am only disheartened and repelled.

I'm glad to have seen Inside, even if I didn't really enjoy the experience. Maury and Bustillo display great talent for filmmaking, and if the rumors about them being picked to help the next Texas Chainsaw film are true, it's a smart choice. They are capable of bringing the series back to a place of brutal intensity and blood-soaked ugliness that's beautifully staged. As Christmas horror movies go, this one ranks behind Black Christmas (because everything does) but way ahead of Silent Night, Deadly Night. While they don't ever employ any of the iconography of the holiday, at least these filmmakers take responsibility for their nastiness. They have made an efficient, effective horror movie that I never want to see again. If this is a more accurate representation of the French Extreme movement in horror, I made the right choice for myself to avoid it all these years. I'll stick with films that are a little more my speed...you know, like Cannibal Holocaust.
Posted by Patrick Bromley at 12:00 PM