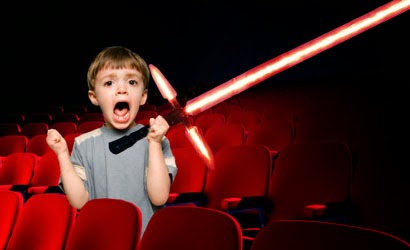 Flick Bait is being hijacked by my old column this week in order to feature the new Force Awakens teaser, as well as the very first trailerz from the previous six films.

Looks cool! I'll have to check it out! Because nothing sells space opera like, "the man who brought you American Graffiti." Apparently, "somewhere in space, this may all be happening right now" ... um, how about A LONG TIME AGO? This is a pretty great preview, given the era [ERA]. At two minutes long, it feels like a regular trailer, but it's labeled as a "teaser" online (and the Internet NEVER lies). And that makes sense! Because things were different in the '70s, man. YOU HAD TO BE THERE. Carter was president. A stoic American Indian (by way of Italy) shed a tear at our polluted planet. And Reggie "Mr. October" led his New York Yankees to a World Series victory over the Los Angeles Dodgers. BUT HOLD ON. Can we all take a giant leap back and admit that Star Wars is a pretty terrible name for a movie? Look, I love the franchise as much (if not more) than most of you. But dat title ...

HOLY SHIT THIS TRAILER. This is just perfect (because it's nuts). Seriously, if you skip most of these previews and simply read my commentary (I'm fatter, uh ... I mean "flattered"!), I would really encourage you to watch this one. It's mostly drawings and stilted narration with mispronounced names. I mean, seriously ... Princess LEE-ah? Lan-DOW Calrissian? There's not one live action shot in the entire 90 second runtime (excluding the kind of cool-looking image of Darth Vader's helmet at the end, which is not actually in the movie). It feels like some ad executive took very rough notes at a Lucasfilm meeting, grabbed a couple storyboards, and just said FUCK IT. And you know what? It STILL works! Although maybe I'm biased, because we know how great the movie ends up being.

Aaaand ... here it is. REVENGE of the Jedi. The way it should be! Just kidding! Because who really cares about whether it's "Revenge" or "Return"? I mean, sure -- a Jedi would not seek revenge. Right. Gotcha. But, according to Obi-Wan Kenobi, "Only the Sith deal in absolutes," which, as we all know, is an absolute. So ... Obi-Wan's a Sith? Of course not! It's a [stupid] quote from a [stupid] prequel! MY POINT: let's not read too much into fantasy films, k? Also, this teaser isn't very good.

ARE YOU AN ANGELLLLL? Can we all take a moment to mourn (SPOILERS!?) the premature passing of the most legit character in any of the prequels? I'm speaking, of course, about Darth Maul, who appears here in all his menacing, double-bladed lightsaber glory. George Lucas is such a fool, killing off his awesomest (it's a word) character in favor of a vaguely racist-stereotype Gungan (whose dopey name I refuse to mention). Thankfully, this teaser(? Which runs just over two minutes [weird]) looks pretty badass, even now (especially with all of us knowing how bad the Episode I truly is). Little is shown of the bad stuff. Lots of the good stuff is on display. I kind of ... want to watch this movie again?

Some quick thoughts (it's late and I'm drunk) ... Darth Vader breathing! But why? Anakin Skywalker doesn't "become" Darth Vader until the very end of the NEXT movie! That CGI looks not very good! Anakin has a gross rattail! I prefer the puppet Yoda (which was still in use in The Phantom Menace). Samuel L. Jackson looks pensive! Why so sad, Sam Jackson? Zip-lining! I want to kiss Natalie Portman! Why is Watto featured so prominently in both of the last two teasers? Do people really care about this second-rate, punchable Toydarian slave owner? But whatever! As soon as the 20th Century Fox and Lucasfilm logos appear on screen, I'm a little kid again!

This is easily the most kick butt teaser from the entire Star Wars cannon. Probably because it borrows HEAVILY from the original movies (all that Obi-Wan narration, John Williams score and character design DOES NOT HURT). I'd be lying if I said I didn't want to watch this movie again. Right now. Even though I know it's not very good! Ah, marketing! And nostalgia! One-two punch!

And here it is. Which I'm sure you've all already seen. YOU'RE WELCOME? For a brief, fleeting moment, I foolishly considered making this a Flick Bait column about the fan reactions to the stupid crossguard lightsaber shot. I mean, FOR REAL. So many suggestions for improvement and nit-picky complaints. NERD CULTURE. And let's not even get into the [SHOCK] black Stormtrooper or droid on a soccer ball or Daisy Ridley's character's Fudgsicle-shaped speeder. There's so much to complain about! Yet I won't do that here. Because, honestly, I'm really excited about this movie. And the trailer looks cool! I like the casting, the choice of director, the ambition, the buzz, the fact that it's not written by George Lucas AND the noticeable lack of lens flares. HAVE YOU FELT IT?
Posted by Patrick Bromley at 12:00 PM

Email ThisBlogThis!Share to TwitterShare to FacebookShare to Pinterest
Labels: attack of the clones, flick bait, george lucas, jj abrams, return of the jedi, revenge of the sith, star wars, the empire strikes back, the force awakens, the phantom menace, watchin trailerz with doug