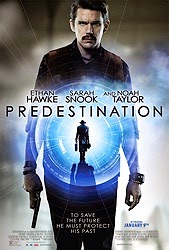 Pardon me, but my head just exploded.

I love time travel movies. Like buddy cop movies and revenge films, there's hardly an entry in the time travel subgenre to which I won't give a shot. It's not just because of my love for Back to the Future, either; I'm just a sucker for the idea of knowing exactly what lies ahead by seeing it firsthand or the ability to reshape the past. This probably says a number of things about me that I'm not willing to confront. Let's just stick to time travel movies.

Predestination, the third and latest film from Australian twin brother writing/directing team Michael and Peter Spierig (of Undead and Daybreakers fame), is the kind of time travel movie that spins your head around, not fully coming into focus until its final moments. It is based on Robert A. Heinlen's short story "All You Zombies" and is not a film for all tastes, as I can already imagine some audience members rejecting not just several of the things presented on screen but also the ideas it ultimately embraces. It is a fascinating and beautiful mindfuck. 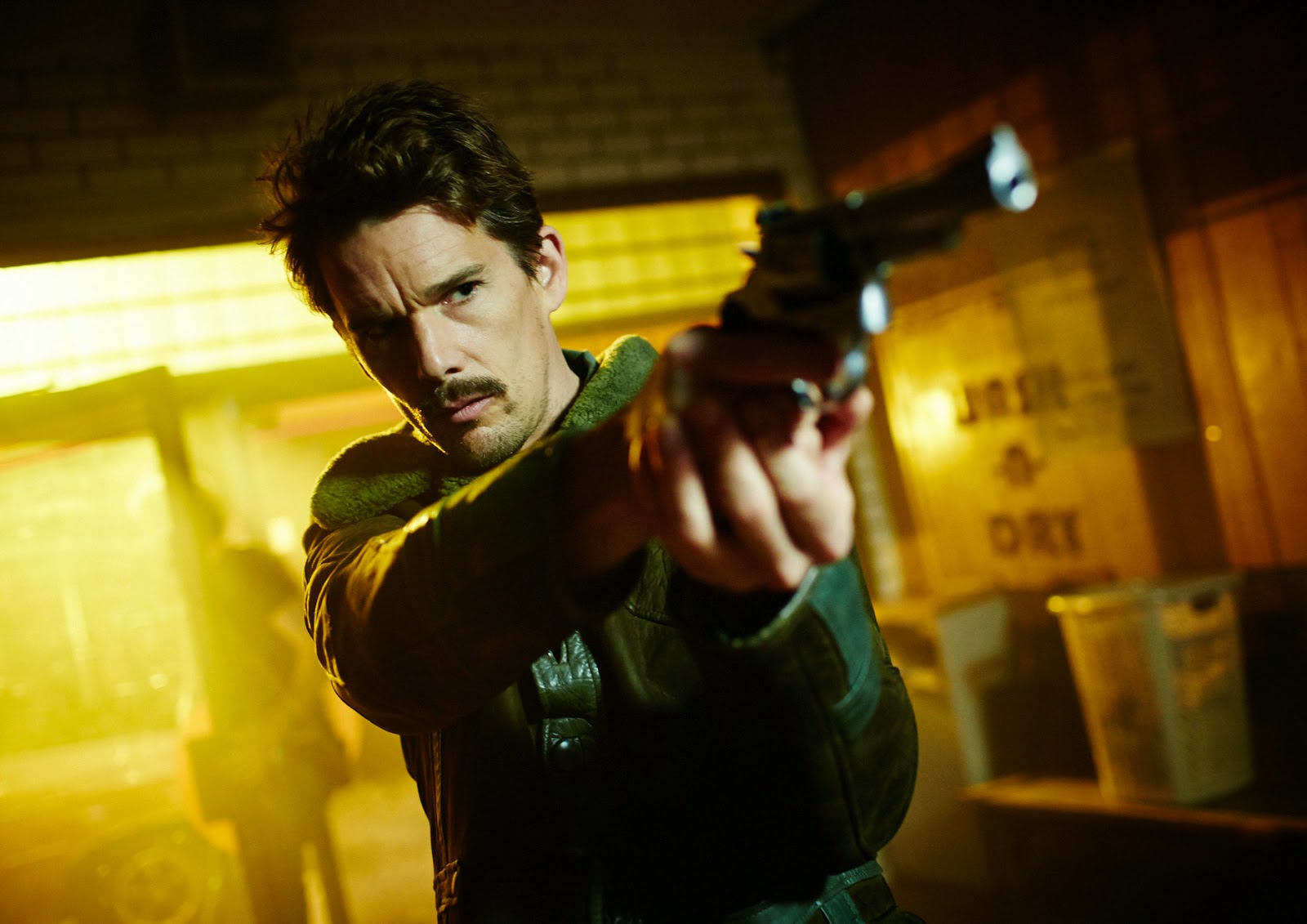 Ethan Hawke reunites with the Spierigs to play an unnamed Temporal Agent who is jumping around in time to catch a criminal known as the Fizzle Bomber, who we know will be responsible for several terrorist attacks including one in New York that will kill more than 10,000 of people. After healing from a terrible injury the requires reconstructive surgery, the Agent is sent back to the 1970s to pose as a bartender. There, he meets a man named John (Sarah Snook) with a truly incredible story -- a story that has implications that ripple through decades and the rest of the film.

Here's the thing about the story that Sarah Snook tells: it's brilliant and crazy compelling, wonderfully realized in that sleek '60s "mod" style and terrifically acted by Snook et al. It also goes on for about a third of the movie's running time, and as it was unfolding I was positive that the Spierigs had made a huge mistake -- that it was less a narrative choice than an effort to keep the budget low. By the time the film ended, I realized that the story is far from filler. The story is everything.

I find myself unable to say much more about Predestination, as it's the kind of movie that works better the less you know going in. It can be confusing and disorienting in the early going, but that's by design -- the Spierigs want us to have to find our bearings just as the Agent does each time he jumps in time (represented by the same "disappearing from frame" technique used in the great Looper, proof that you don't need a bunch of lightning and portals and shit). Part of the joy of the movie is putting the pieces together so that by the end you're ready to immediately watch it again knowing what you now know. 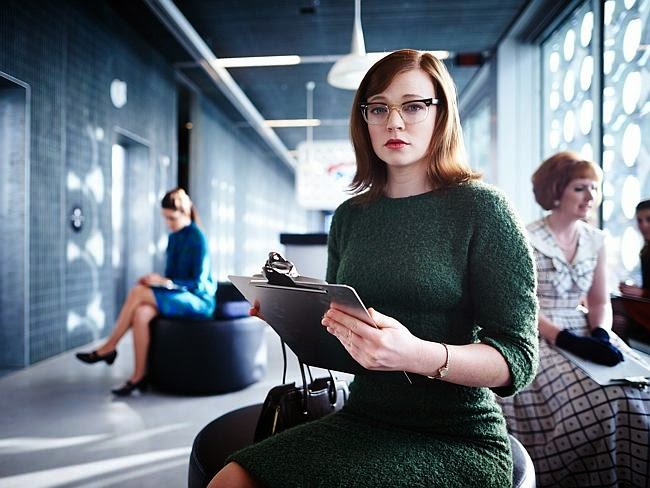 I liked the Spierig brothers and what they're doing in the world of genre cinema. I've liked all three of their movies in one way or another (Undead probably the least of the three, as it feels the most like a first movie). In addition to writing and directing their films, they've also worked as editors and do their own visual effects. Peter Spierig even wrote the score for this one. All of their films look slick, too, with a formal polish that betrays their low-budget origins. But while Daybreakers was a fun, incredibly bloody mix of high concept ideas (the whole world has been turned to vampires) and shlock, Predestination suffers a bit by cutting back on the schlock and leaning more heavily on the "ideas." Unfortunately the movie is really only interested in exploring one idea. It digs into it with depth and in a way that is always totally compelling, but there's not a lot to contemplate on afterwards. The most head-spinning stuff is in the story's construction.

I also like that Ethan Hawke, much like Elijah Wood these days, has become such a dependable go-to guy for these low-budget genre films, from Sinister to The Purge to Daybreakers and Predestination. His work in the movie is subtle but clever; you don't think he's doing much but being himself, but that's all part of the game the film is playing. Watch the way he shifts during the long story scene, flipping from Mr. Laid Back bartender confidant to the guy offering the devil's bargain ("If I could put a man in front of you right now and guarantee you'd get away with it, would you kill him?") to time traveling superhero in a matter of minutes. There are other particular performance challenges Hawke faces, too, but to talk about them would be to spoil them. As good as Hawke is, he's no match for Sarah Snook, who turns in a performance that can only be described as...diverse. And brave. And interesting and weird and hypnotic. 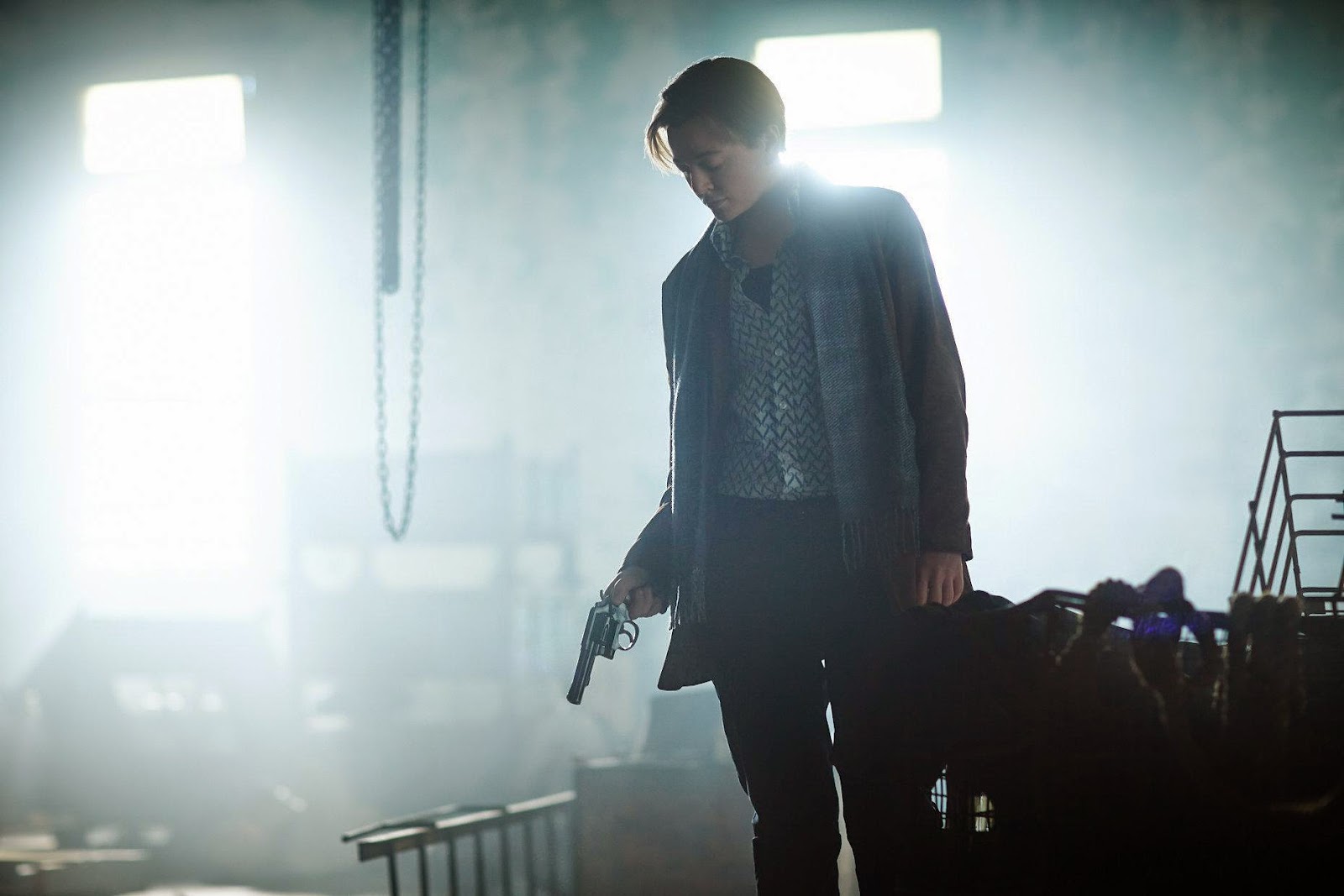 For all of its theoretical headiness, there's not much about Predestination that continues to rattle around in my head -- it's mostly the performances and an admiration for the technical skill on display that sticks with me. That's ok. It is a closed loop of enjoyment: daring and compelling as it unfolds but taking up no permanent residence in the brain. It is a time travel movie unlike most that I have seen and is willing to say some things about the kinds of time travel paradoxes we've grown accustomed to seeing on film, and for that it deserves our attention. I wish the Spierigs would either get more opportunities to make films or else work more quickly (they were attached to a sequel to The Dark Crystal for some time, but that project appears to have fallen apart), because their voices are unique in genre cinema. They're working in familiar subgenres -- be it the zombie film, the alien invasion movie, the vampire film or time travel -- but twist them just enough that they stand on their own. They so clearly love what they do, and their enthusiasm is infectious. Predestination is full of it -- a movie drunk on its own audaciousness and twisty narrative. It's a trip.