The Overlook: The Missouri Breaks

Last week, I looked deeply within the eyes of the mid-1970s Jack Nicholson comedy The Fortune and found nothing, staring back at me. This week, I look at his controversial 1976 vehicle and discover...something quite unique. 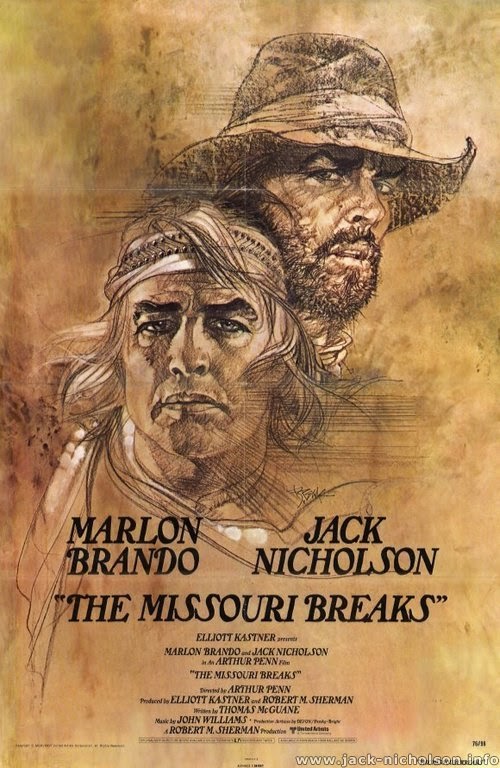 With the ill-gotten gains of a daring train robbery, the gang buys a small ranch from Braxton himself; they intend to pose as homesteaders while actually using the ranch as a "halfway house" before splitting up their stolen horses. While most of the gang travels to Canada to steal more horses, Logan stays behind to maintain the ruse and tend the farm; he soon falls in love with Braxton's daughter Jane (Kathleen Lloyd).

Meanwhile Braxton, angered by the murder of his deputy, hires famous bounty hunter Robert E. Lee Clayton (Marlon Brando) to track down the rustlers and mete out his own brand of justice.

It does not take a genius (though all my babies are geniuses) to realize that we are in Sam Peckinpah/Wild Bunch territory here, and director Arthur Penn is certainly up to the challenge. Penn's first film was the revisionist western The Left-Handed Gun, featuring a wildly post-modernist view of protagonist Billy the Kid, and he also directed the similarly revisionist Little Big Man, featuring the Native-American stylings of one Dustin Hoffman. Penn is no stranger to anti-heroes on the western frontier. 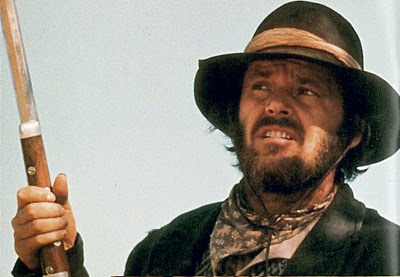 One of my favorite tropes in Hollywood Westerns is the way main characters respond to death. The good guys always take death seriously; they'll pause to give the dead man a Christian burial and say a few words over his grave. The bad guys, however, do not take death seriously, usually treating it as a sadistic joke (if they react to it all.)

It is significant that Brando's entrance in the film disrupts a funeral. He literally grabs a body out of its ice-filled coffin and lets it drop again, spattering the bereaved with chilled corpse juice. For Brando's Robert E. Lee Clayton character, death is merely a game, a way to keep score. One of the film's most jarring moments comes when Clayton tells Braxton that he doesn't care about getting paid—apparently, this mercenary hunts for the pure thrill of killing.

The rustlers, by comparison, take death seriously. We first meet the gang in a scene that details their thoughtful, moody reaction to their friend Sandy's death. It has meaning for them. This humanizes the lawless band and makes us root for them.

All of this circles back to the overarching theme of all Hollywood Westerns: What kind of men did it take to tame the west, and what kind of men did it then take to sustain a civilized culture? Clearly, these were two different kinds of men. The warriors that made the land safe for homes, churches, and schools eventually found themselves summarily unwelcome in the very towns they had helped tame. 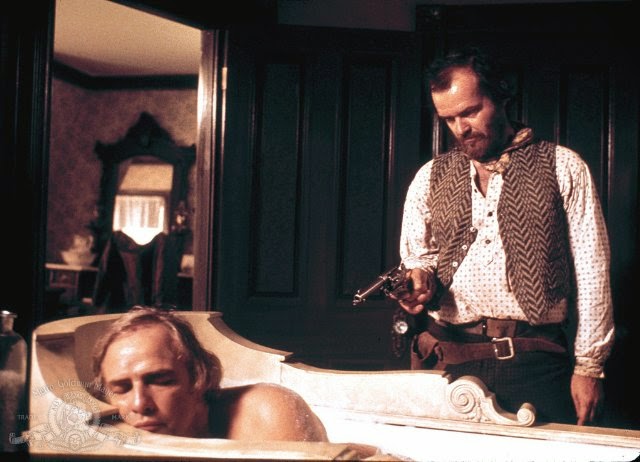 The 1960s and '70s turned this trope on its head as Western after Western (and even some disguised Westerns like Robert Aldrich's The Dirty Dozen) began to question the conventional wisdom behind the taming of the West. Many of these movies peeled back the veneer of the "civilized" man to ask uncomfortable questions about the price of all this taming. To what extremes would such a man go to ensure the safety of his community? What happens when the ideas of "civilized society" start to sound a lot like "personal self-interest"? And who are the real "bad guys": if the men who settled the American West are actually selfish, racist, blood-thirsty savages—but the men regarded as bandits and outlaws are the only men left with a code—then what the fuck?

At the time of its original release the film was pilloried. Brando's previous film had been The Godfather; Nicholson's was One Flew Over The Cuckoo's Nest. After those two award-winning performances, expectations ran high, and the modest Missouri Breaks did not meet almost anyone's expectations.

The 800-pound gorilla in the movie is Brando's performance. That is the one element that critics of the time singled out and proceeded to beat a dead horse with (Did you see what I did there?) This is an exaggerated, scene-stealing performance. Brando's character (if not Brando himself) is clearly a lunatic...but that's the point. There are villains, and then there are VILLAINS. Brando's villain is bull-goose loony: he commits cold-blooded murder in frontier finery and fur hats—even, at one point, in a dress!— and prefers the sneak attack. Nicholson's To makes the point early in the film that the mercenary's "modern" tactics don't seem quite fair; in Tom's world, a man should "look a man in the eyes" when he has to kill. In this, I do not believe that Brando's outsized performance sabotages the film, but merely reinforces its main theme. After a taste of Brando's murderous rampage, the audience might see that a little horse rustling in the night doesn't sound so bad. 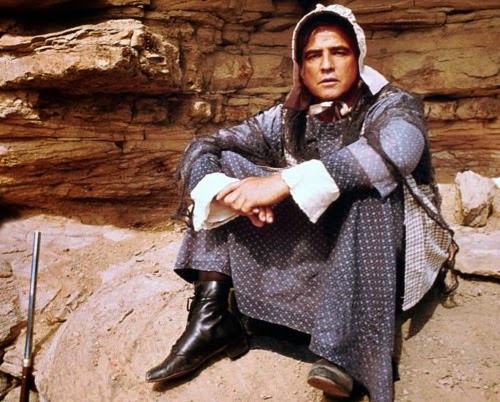 The New York Times’ Vincent Canby led the charge against the film, writing, "The Missouri Breaks too often seem like camp. This, I suspect, is principally because of the out-of-control performance given by Mr. Brando. He enters the film hidden behind a horse, which he at last peeks around, and then spends the rest of the movie upstaging the writer, the director and the other actors. Nothing he does [...] has any apparent connection to the movie that surrounds him. He grabs our attention but does nothing with it [....] There is no grandeur to Mr. Brando's character, nor much mystery. He behaves like an actor in armed revolt. One has no way of knowing whether The Missouri Breaks would have been a good film without this peculiar presence as its center."

But time has been kind to The Missouri Breaks. Compared to some contemporary action films, Brando's mannered, Method performance seems almost restrained. The film is almost worth watching for its cinematography alone. Although one can argue that occasional vistas pull one out of the film with their sheer breadth and beauty, the location scouts for The Missouri Breaks more than earned their pay. There are a series of shots in the film's Canadian interlude that stun the viewer with their breathtaking view of an unspoiled landscape that recedes uninterrupted into the sunset.

The supporting performances are stellar. Penn here assembled a rogue's gallery (literally) of some of the best character actors of the '70s: Frederic Forest, Randy Quaid, and the lesser-known John Ryan have never been better than they are here, and Harry Dean Stanton has a speech about his father and his dog that nearly steals the film. There is a hesitancy and sweetness in the performances of Nicholson and Kathleen Lloyd that exists as an antidote to the violence surrounding them. Watch The Missouri Breaks for a rare subtle and underplayed Jack Nicholson performance.

Rumor has it that an un-credited Robert Towne worked on the screenplay.

Babies, this is reason enough to seek out this beautiful, violent, underrated film.

The fine folks at Kino-Lorber recently released The Missouri Breaks on Blu-Ray disc.
Posted by Patrick Bromley at 5:00 AM