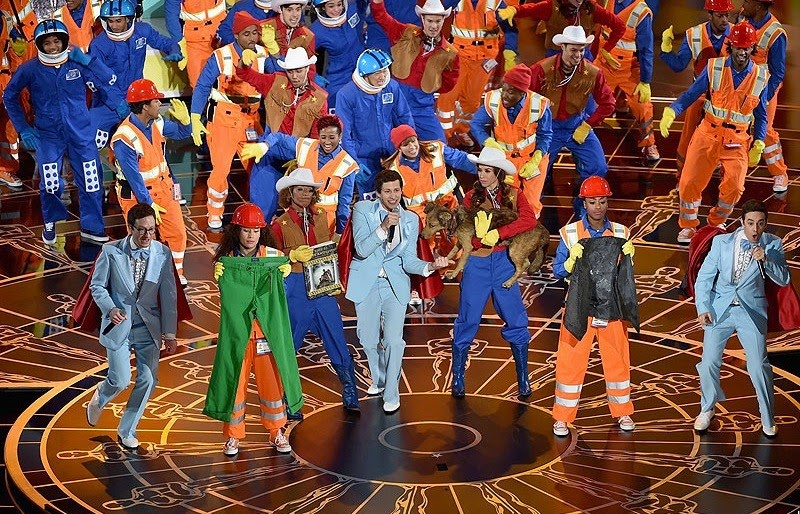 In yet another award show filled with uncomfortable jokes delivered in uncomfortable style, endless snubs of award-worthy films, and an overall production that many news sources are dubbing the most boring Academy Awards yet, I thought I should focus on what tends to never steer me wrong: the music. Follow me, if you will, on a trip down musical lane.

Let's start with this year and work our way backwards, otherwise I fear I will just be bouncing all over the place.... Like I normally do!

With 2015 marking the 50th anniversary of The Sound of Music, Lady Gaga left her meat dress at home and brought nothing but her raw talent to the stage. Performing a medley of songs from the musical film, she had the audience on their feet with a rightly deserved standing ovation.

A couple years ago at the 2013 awards show, Adele wowed the crowd with her beautiful performance of "Skyfall," the titular track of the latest in the James Bond series. Having returned to the stage only the year before following microsurgery on her vocal chords to remove a benign polyp, it's amazing how even just listening to the YouTube version she is able to grab you by the face and command your attention. Shortly after her incredible delivery (first time performing the song live!), "Skyfall" won the Oscar for the year's Best Song.

Dueling Divas! So many people wrote stupid comments about how the 2007 Oscar show would be all about Jennifer Hudson vs. Beyonce and who would come out on top during their live performance of the Oscar nominated songs from the Motown inspired film Dreamgirls. How about showcasing incredible talent from two of this generations talented musicians?! And while I was looking through YouTube trying to track down a clip of the performance, the things that kept popping up made me laugh more and more. "Beyonce Threatens to Kill Jennifer Hudson for winning Oscar." WHAT THE CRAP IS THIS?! Annnd more importantly, WHY HAS IT HAD 62,000 VIEWS? People are dumb. Ugh. The film did not win for any of it's nominated songs, but Jennifer Hudson did go on to win Best Supporting Actress for her role and in my opinion it was much deserved in my opinion! On another note, I think I found the clip I was looking for, but am not 100% certain that it is the Oscar performance. Does anyone's memory stretch that far back? HAHA! Mine certainly does not!

When you think of the glitz and glam of the Oscars, do rap, hip-hop and pimp immediately come to mind? Think back to 2006 and an independent film called Hustle & Flow. The theme song “It's Hard Out Here For A Pimp” was nominated for Best Song and the live performance by Three 6 Mafia which went uninterrupted by the network censors and featured a dozen extras to give a sense of the movie's high energy bustle, has a terrific balance of both rap and singing and went on to win the award that evening! Not typically a genre of which I am a fan, but when I am presented with good music, I tend to appreciate it no matter the genre!

I love Christmas! I love inspirational songs! At the 2005 Academy Awards, we get just that in Josh Groban and Beyonce's performance of “Believe” from the The Polar Express. Huh, no dueling divas press about this!? Heh heh. I love this performance, and you can see a bit of the self-professed nervousness on Josh Groban's face as he starts off, but just nails it as usual.

In 2003, U2's oscar nominated "The Hands That Built America" (written for Martin Scorsese's Gangs of New York), was a live experience not to miss. In fact, the band has only ever sung the song live seven times, so if you did miss the awards show that year, you will only ever have seen it via the YouTube. No need to despair, though; as with most of the performances I have touched on in this article, the passion, energy and emotion come flowing through the online stream and into your heart. The song honours the Irish people who immigrated to America in search of a better life and who were willing to fight for it at any expense.

Open up a search page and type in "Bjork" and "Oscars." The focus is at first all on her swan dress, which was cute and very fashiony. However, scroll down and you will find treasure! Here's a video of her Oscar nominated song “I've Seen It All” from Lars von Trier's film Dancer in the Dark, in which she also just so happens to star. Multi-talented? Hell yeah. Watch the clip and fall in love with this adorable Icelandic artist who steals the show away from her dress. An empty stage, a microphone and Bjork is all you need. Based on this revisit of her performance I will do even more to try and make it to any of her live shows. Maybe I'll even make my own swan dress!

“I'm King Of The World!” Make you cringe? Even after all these years? Heh heh heh. Yep, me too! In the year of “memorable” acceptance speeches, the year's big Oscar winner also had a memorable song! Celine Dion may not be for everyone -- I might even get a little judgey if I find out she's on repeat in your “favourites” playlist -- but you have to admit she is terrific at what she does. Or not. Maybe you're even a little judgey of me for including her in here. Crap. Am I outing myself as a closet Celine Dion fan? Nope, too far, even as a joke! RETRACT! The year was 1998, Titanic wins everything and Celine Dion gives a flawless performance of “My Heart Will Go On” whilst surrounded by dry ice, a large orchestra, and bigger than life arm gestures.

There was a bit more going on in 1998 than just Titanic, no matter what James Cameron would have you believe! A little film called Good Will Hunting threw Matt Damon and Ben Affleck into the world's spotlight and, along with their film, an artist by the name of Elliott Smith to the Oscar stage. In sharp contrast to the previously mentioned Best Song contender, he stood alone, simply lit and with nothing but his voice and guitar. This is why I love music! Something so stripped down, musically, aesthetically can be more beautiful than the most elaborate set-up.

And the winner is: (As stated by Madonna) “What a shocker... 'My Heart Will Go On.'” Again, t'was the year of Titanic, and rightly so in some categories!

In 1994, Johnathan Demme's Philadelphia struck it big with two nominations for Best Song. Bruce Springsteen performed the film's opening song “Streets of Philadelphia,” and showed both the film and the song what I feel is the respect it deserved -- no flair, no big show, just he and his band and his microphone. Intensely moving, captivating and heartfelt. Loved it!

Follow this with Neil Young's haunting performance of the closing title track of the film, “Philadelphia,” just he, his piano and featuring background vocals by his wife Pegi and sister Astrid. During his acceptance speech for the Best Song, Bruce Springsteen said that the award deserved to be shared between the two songs. I agree Bruce! Sharing is caring.

Yep, even with idiot hosts prancing around in their underwear, The Academy Awards are able to maintain some form of dignity in way of the artists who perform their Oscar nominated songs on the show. At least they get something right! (Unless they decide to not have any of the nominated Best Songs performed live! As in 2010 and 2012... This better not be a growing trend!)

I'm sure I've left out many fantastic performances (some due to being unable to find them on the YouTube to give them a re-watch before writing about them, others because they were before my time and as I didn't originally see them myself, it didn't seem right to include them), and these were the ones that either stood out in my mind and/or I recalled loving the first time I saw them. I hope the music tweaked something in you to give one or some of these movies a re-watch. Myself, I like doing things on a big scale, so I think I'm due for a Bond marathon. I know I have not watched them all yet, so I feel the need to catch up with the guys as they work through all of the Bonds for the podcast! Also, find anything and all things Bjork. I do believe I have me a small girl crush.

One last thing! How could I possibly think of declaring this as a finished piece without including one of my most memorable Oscar moments? (I was 19, and loving stupid South Park) “Blame Canada,” which just so happened to be controversially nominated for the Best Song award. Also, Robin Williams didn't say fuck. But I just did.