Off the Shelf: How to Murder Your Wife (Blu-ray) 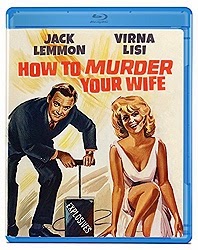 Were there Men's Rights Activists in the '60s?

Don't be fooled by the title of the 1965 film How to Murder Your Wife. It's not really a black comedy about getting away with a crime or combining death with the usual conventions of the romantic comedy. It's not even fair to call it a Battle of the Sexes comedy -- common in the age of Rock Hudson and Doris Day -- because calling it a "battle" implies that there are two sides. In this movie, the women are the enemy and the men are the victims until they're just not going to take it anymore. Its gender politics aren't just outdated for 1965; they predate 1935, too. 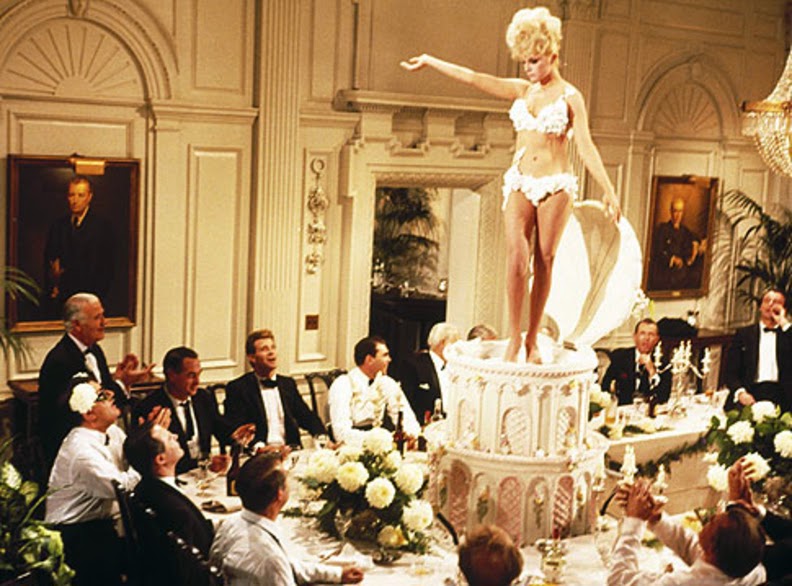 Jack Lemmon plays Stanley Ford, a hugely successful cartoonist and confirmed bachelor whose comic strip Brash Brannigan is beloved in town. After getting drunk and blacking out one night, Stanley awakens next to the woman who jumped out of the cake at a party (Virna Lisi). It turns they're married; she's from Italy, speaks no English and refuses to get divorced because it's not acceptable in her culture. To help with communication, Stanley pairs his new bride up with Edna Lampson (Claire Trevor), the shrewish wife of Stanley's lawyer and close friend Harold (Eddie Mayehoff), who speaks Italian and is willing to translate but who ends up passing along her nagging ways to the gorgeous Lisi. As his wife continues to wreak havoc on Stanley's real life, so she does on his fictional life as a secret agent in the pages of Brash Brannigan. So Stanley devises a plan to kill of "Brash's" wife. It's so convincing that, coupled with the disappearance of Lisi, the police are sure Stanley killed his spouse for real.

I do my best to watch movies in the spirit in which they are intended, which also means factoring in the era (era) during which they were made. I can recognize that Birth of a Nation is horribly racist, but I must also accept that it is a product of its time and consider it thusly. Even with this in mind, it's difficult to overlook the insane sexism of How to Murder Your Wife, because the movie was made at a time when everyone involved should have known better. I kept waiting for it the conceit to become the joke of the film -- a third act turn, perhaps, that would expose the men as fools and recognize that they are the problem, not their wives. It does not come. I'll give How to Murder Your Wife this: it sticks to its guns. This is a movie that begins and ends with women being the problem. It at least has the courage of its wrongheaded convictions. Jack Lemmon is one of the only actors to ever live who could pull off this material without having the audience turn on him completely (Jimmy Stewart is another; Scott Adkins a third). There's something that still feels good-natured about his put-upon befuddlement, and even when he's on trial for murder maintains such a relaxed screen presence that the movie remains a breezy lark when it would otherwise be infuriating. As his adoring but possibly misguided wife, Virna Lisi is beautiful but not allowed to be much else -- her character is not even given a name, in case you're still not sure of the movie's attitudes towards women. Would that there had been more scenes of her and Stanley actually getting to know one another and falling in love, as it might have helped balance out acridity of all the constant complaining: women want to change us, women want to run our lives, women make us gain weight (?), women be shopping. The climax of the movie finds Stanley getting a man to admit that if he could rid of his wife and know that he could get away with it, he would. That should have been the ending: the women call the men's bluff and disappear, fulfilling their "wishes" and leaving them to themselves. Ending with these men alone and miserable would at least have put the rest of the film into perspective.

I know I'm being too hard on How to Murder Your Wife. None of it is meant to be taken seriously, and I suspect the filmmakers knew they were making a dinosaur even in 1965 -- it plays like the desperate rantings of a population that senses the changing of the tides and can do nothing but shake its fists against it. At two hours, the movie is criminally overlong (two sequences in which Stanley plays out his Brash Brannigan fantasies in real life feel like they go on FOREVER) and too ready to play the same notes again and again. Lemmon keeps it afloat, though, twinkling without an ounce of meanness -- it's all a goof, his performance tells us. Everything else feels like a relic from a period long-gone. As a time capsule, it's an amusing diversion...even if it does leave a bitter aftertaste.

Buy How to Murder Your Wife from Olive Films here
Posted by Patrick Bromley at 12:00 PM

Email ThisBlogThis!Share to TwitterShare to FacebookShare to Pinterest
Labels: 1960s movies, blu ray reviews, how to murder your wife, jack lemmon, off the shelf, olive films