This is the film Frank Capra would have made... had he still been alive in 1993.

I do not make that comparison lightly. Capra made some of the greatest American films during his heyday in the 1930s. His It Happened One Night was the first film to sweep the top five Oscar categories, putting then-minor studio Columbia Pictures on the map. His You Can't Take It With You won Best Picture in 1938. Capra himself won Best Director three times in one decade, the last for Mr. Smith Goes to Washington. After World War II, Capra seemed somehow out of fashion with the times, and his view of America was labeled "Capra-corn."

In message, content, and style, Ivan Reitman's Dave is a throwback to Capra's simpler time, my babies. Dave was out of step with the irony-laden '90s, and it is certainly out of step now. If it is true that we Americans get the politicians we deserve, perhaps we get the comedies we deserve as well. 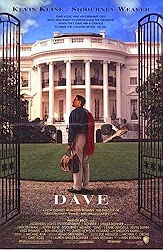 The Plot In Brief: Dave Kovic (Kevin Kline) runs a small employment agency, where he cheerfully spends all day trying to put as many people to work as possible. He moonlights as a celebrity impersonator at birthdays, bar mitzvahs, and car dealership openings because he bears an uncanny resemblance to President Bill Mitchell (also Kline).

One night the Secret Service shows up at Kovic's house with a particularly sensitive assignment: they whisk him away to the White House and ask him to impersonate the real President at a State function. Unforeseen circumstances leave the President temporarily debilitated and, rather than summoning the Vice President, some particularly shady White House staffers convince Dave to subvert the Constitution and impersonate the President for a few weeks... you know, for the sake of the country. Hilarious and heart-warming hijinks ensue.

In Dave, we see a regular-guy protagonist not too far removed from Capra's Jefferson Smith or Longfellow Deeds. Kevin Kline's Dave Kovic sings "Oklahoma" as he bikes home from work. His job is putting people to work. He is still capable of wonder and reverence towards the Office of the President. You know, a real loser...at being the kind of cynical, winkety-winking jerk we have become all too used to seeing in movies today.

Kline is more than up for the "Prince and the Pauper" challenge of playing both great-guy Dave and miserable, stick-up-his-ass President Mitchell. In the single scene of the two men together, Kline convincingly portrays two very different men in split screen; the real President is even a tad taller! NOTE: Kevin Kline's Presidential impersonation here is much better than his President Grant in Wild Wild West. Here we have the perfect Capra set-up—indeed, the set-up for all Hollywood Social Problem films. In Dave, our democratic system works; the film never critiques our government, and it never draws party lines. Like all Hollywood Social Problem films, Dave suggests that bad situations arise only because of bad individuals in the system. The system itself is never held to scrutiny—the focus is on personal responsibility.

Compare this to Capra's ur-film, It's A Wonderful Life, wherein capitalism itself is never held to scrutiny (even though one section of the film takes place during the Depression.) Jimmy Stewart's town, his family, and his very livelihood are in jeopardy because of a single bad apple: Mr. Potter. In Dave, the system is fine; the President himself and his pit viper Chief of Staff are both just evil sons of bitches.

The fault lies not with our systems, organizations, governments, corporations, or even society itself, these films tell us; the fault always lies with individuals acting on their own, against society; with bad individuals, evil individuals. Get rid of them, these films whisper, and everything will be right as rain. 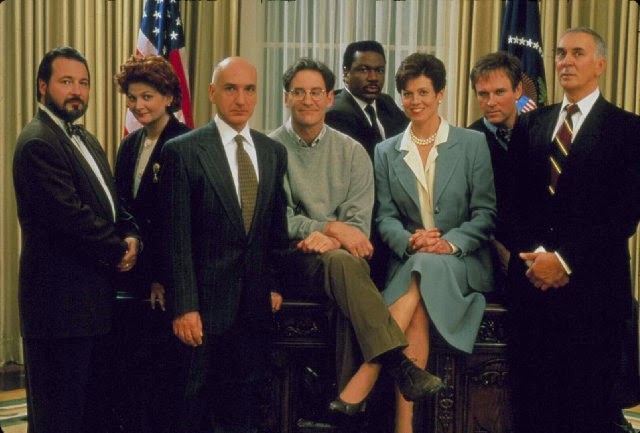 FULL DISCLOSURE: I am a sucker for all of this. Although I normally disguise myself as a mocking, sarcastic, ironic curmudgeon who lacks basic morals and a soul, I secretly love this country. I love what it is and I love its potential. My problems with this country inevitably match those of '60s-era (era) hippie protesters who merely wanted to the country TO BE MORE OF WHAT IT PROFESSED ITSELF TO BE.

Dave is essentially a treatise on irony, suggesting that it is far better to be genuine than to be a snarky, soulless, sarcastic ghost, "pointing an empty sleeve and laughing at everything that normal people hold dear." (That last part is from Inherit the Wind.) We see this throughout Dave, not only through the fine example of how Dave Kovic chooses to live his life and view the world, we see it in the film's subplot concerning Vice President Nance (Ben Kingsley).

President Mitchell, his Chief of Staff (a terrifically oily performance by Frank Langella), and his speechwriter are embroiled in a financial scandal inspired by the real early-1990s Savings and Loan Crisis; it also feels eerily reminiscent of the more recent Savings and Loan scandal that nearly bled this country dry in 2008. In Dave, the bad guys want to pin the blame on the Vice President, a gentle former shoe-salesman who went into public service to (gasp!) actually help people. 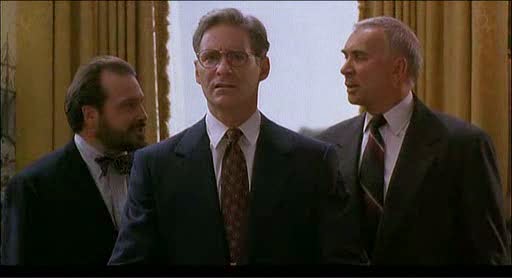 This leads to one of my favorite scenes in the film. Dave finally sits down with Vice President Nance and discovers he is a good man, not a lunatic as the President's staff has painted him. The two talk about what first got them interested in politics, and Kingsley has a monologue that should be required viewing at every Republican National Convention.

The film also delights in a subtle dichotomy between death and life. In the scene that introduces the audience to President Bill Mitchell, he chastises his cabinet about a Bill in Congress that hasn't been "killed" as promised—he doesn't want to have to look bad vetoing it. "That's the difference between me and you people," Mitchell snarls. "When I kill something, it's dead." It's an ironic line for a man who (SPOILERS) will be (brain) dead another ten minutes into the film. Later in the film, when Dave starts ignoring his handlers and tries to effect change from within, Frank Langella's Chief of Staff calmly explains that he should be allowed to murder Dave—"He's not the President. He's an ordinary person—I can kill an ordinary person."

This echoes something I brought up in last week's column about Hollywood Westerns: one of the easiest ways to spot the bad guys is their cavalier attitude about death. The bad guys in Dave talk about killing people; Dave Kovic wants to find them jobs.

Dave is also admirable for its refreshing lack of what I'm going to call "Hollywood Underlining." The film gives its audience credit for being sharp, sentient beings that have lived life and understand things. The way the film handles the growing romance between the first lady and Dave is probably the best example of this. Besides being a HSP film, Dave is also a romantic comedy, but a tricky one. For the majority of the film's running time, our female love interest is already married—to the President of the United States! Dave's romance is handled with taste and intelligence; the film is "adult" in the best sense of that word. 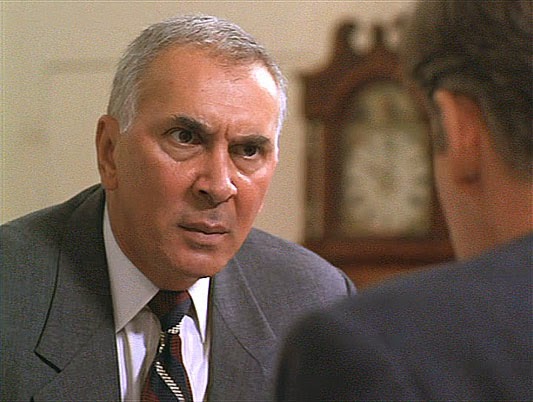 Plus, the performances in Dave are just first rate. Consider Frank Langella, here playing a slimy bad guy; what a range this actor has. From his Ostep Bender in Mel Brooks's The Twelve Chairs to his romantic vampire in John Badham's Dracula to his felon/president in Ron Howard's Frost/Nixon, Langella can play anything and is one of those actors who improves any film. Note: He is particularly evil and slimy here! (Not Richard Nixon slimy, but close.)

Ghostbusters alone should be proof that Siguorney Weaver is a gifted comic actress, but I sometimes feel that her success in Alien may have robbed us of more comic performances on the level of her work in Galaxy Quest and here in Dave. Her portrayal of the First Lady is something of a high-wire act. It is important that the audience like her, but the plot makes her run the gamut from icy to mean to caring to sad to romantic. Sigourney Weaver does not give a one-dimensional performance. 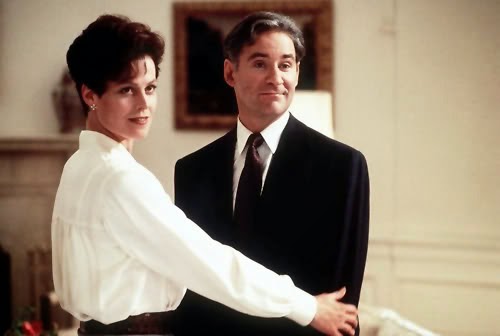 The film itself is gentle and sweet, and everybody plays it straight. This may just be a personal preference, but I find that most of my favorite comedies (Chaplin's The Kid, Keaton's The General, Wilder's Some Like It Hot, Kubrick's Dr. Strangelove, Mike Nichol's The Graduate, and Michael Ritchie's The Candidate, to name a few) share that one trait: the films never "laugh at their own jokes" or wink at the audience. The films (and actors) play it straight, and this may be the one of the secrets to good film comedy: the characters in the film DON'T KNOW THAT THEY ARE IN A COMEDY.

Dave is available on DVD from Warner Home Video and to purchase or rent from the iTunes Store or Amazon Video On Demand.

Why don't we see Dave more often on cable? Maybe because it wears its heart on its rolled-up sleeve, it's too genuine for some, but not for us, babies. Let its sweetness soak in and dissolve the blackness in your hearts.

Want more 1993 goodness? JOIN US THIS SATURDAY FOR F THIS MOVIE FEST.
Posted by Patrick Bromley at 5:00 AM