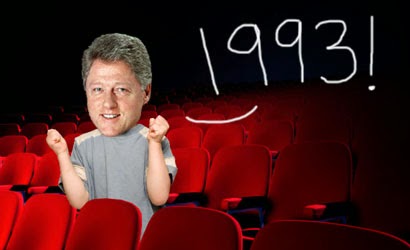 In celebration of this weekend's epic F This Movie Fest 4 extravaganza, Flick Bait is once again being commandeered by my old column. So let's watch some trailerz from 1993, and learn some fun facts about our five movies!

One of my favorite movies from 1993 (more on that tomorrow), Demolition Man is equal parts action and comedy. I also posit that this movie knows exactly what it is (in the vein of Starship Troopers), and that anyone who too easily dismisses its silly premise or violence is missing the bigger picture. Fun Factz[tm]: the U.S. version (of which most of you are probably familiar) indicates that Taco Bell is the only restaurant to survive the "franchise wars," whereas some international versions (countries that don't have a Taco Bell presence) feature Pizza Hut instead (this change includes dubbing and post-production logo changes). I've seen both versions, and it's pretty jarring when you're used to hearing and seeing Taco Bell for so many years. Regardless, both foodstuffs will have you reaching for the THREE SEASHELLS. Also, during the movie, it's revealed (SPOILERS) that John Spartan's (Sylvester Stallone) wife died in an earthquake in 2010. When Spartan then asks about his daughter, he is quickly silenced by Police Chief George Earle (Bob Gunton). So what happened to Spartan's daughter? In an early draft of the script, Spartan meets her in the sewer with Edgar Friendly's (Denis Leary) people. In the final cut, Spartan is even shown protecting an adult woman (his daughter) during the underground shootout. The same female is also seen during the final scene standing next to Friendly while he talks with Spartan. Another draft revealed that Spartan's daughter grew up to be Lenina Huxley (Sandra Bullock). Kinda ruins the whole cyber-sex scene, no?

"It's better than Black Knight!" -Doug Schultz, F This Movie! Of all three films in the original Evil Dead franchise, I'm least familiar with this one (also called Evil Dead 3: Army of Darkness and Army of Darkness: The Medieval Dead). But it kicks ass, and I mean to correct this injustice posthaste! I CAN'T WAIT FOR SATURDAY! Fun Factz[tm]: In Japan, the movie is known as Captain Supermarket (poster here). The movie's budget was approximately 22.8 times larger than the budget of the original Evil Dead. Bruce Campbell's full character's name is "Ashley James Williams." The three words Ash must use to claim the Necronomicon, "Klaatu Barada Nikto," are a reference to the words used to command the humanoid robot Gort (GORT!) in The Day the Earth Stood Still. Sharon Stone was so impressed with Sam Raimi's direction of Army of Darkness, that she insisted that he direct The Quick and the Dead (she also paid Leonardo DiCaprio's salary herself after Sony expressed concern over his inexperience). So, you see, Sharon Stone's not, like, THE WORST.

Don't mess with the mullet! This movie -- the first American feature directed by John Woo -- features the Muscles From Brussels himself, Jean-Claude Van Damme, being hunted The Most Dangerous Game-style by a maniacal Lance Henriksen. Fun Factz[tm]: Universal Pictures had concerns that Woo's limited English would be a problem on set, so they hired Sam Raimi(!) to oversee production and step in to direct if things started to fall apart. Although JCVD is responsible for bringing Woo to Hollywood (the two met when Van Damme was filming Double Impact in Hong Kong), their relationship was strained while making the film. Woo's original cut of the film ran much longer, and focused more on Henriksen's character, Emil Fouchon. Van Damme had his editor recut the film for the producers stating, "People pay their money to see me, not to see Lance Henriksen." After Hard Target made a ton of cash, Universal encouraged Van Damme and Woo to team up again for another action flick, Shadow of Death, but the project never materialized due to their deteriorating relationship. Finally, just for fun, here's a clip of JCVD promoting Hard Target on Larry King Live. 1993 feels like SUCH A LONG TIME AGO.

What a silly trailer. And rather than bore you with an equally silly plot description (that would surely do a disservice to this wonderful movie), I strongly encourage you to read Patrick's write-up from 2012 (link above). Quentin Tarantino-themed Fun Factz[tm]: Tarantino sold the script for either $10,000, $30,000 or $50,000 (reports differ), which was the minimum amount of money the Writers Guild of America (WGA) allowed for a script at the time. With this money, he purchased the red 1964 Chevrolet Chevelle Malibu SS convertible that Vincent Vega drives in Pulp Fiction. Based on a 50-page script by Roger Avary titled The Open Road, Tarantino admits that this is the most autobiographical movie he ever made (even though he never visited the set during filming). Although he did not direct the film (that honor went to the late/great Tony Scott), True Romance is still considered part of the "Tarantino Universe." A few examples: Lee Donowitz is the son of Sgt. Donny Donowitz from Inglourious Basterds (confirmed by Tarantino). Likewise, Floyd (Dick's stoner roommate) is the great-grandson of Lt. Aldo Raine, also from Inglourious Basterds (both played by Brad Pitt). Finally, Mr. White from Reservoir Dogs mentioned having a former partner named "Alabama." Tarantino chose the name Alabama as an homage to Pam Grier, who is named Alabama in Women in Cages.

Who hasn't seen Jurassic Park? I mean, COME ON. If you haven't (and want some plot), please read Adam Riske's love letter from 2013 (link above). Fun Factz[tm]: Both the film version and original book of Jurassic Park generated so much interest in dinosaurs that a record number of students began studying paleontology (case in point: Ross from Friends). Inspiration aside, the movie has lousy science. Other than the Brachiosaurus and Dilophosaurus, the Tyrannosaurus rex, Velociraptor, Gallimimus, Triceratops and nearly every other dinosaur in the film are actually from the late Cretaceous period, not the Jurassic. While the creators of the film originally planned to use only stop-motion dinosaurs, they later switched to photo-realistic CGI for some scenes (mostly full shots; close-ups of dinosaurs were typically animatronic). The Velociraptors, however, are real people in rubber suits. When director Steven Spielberg first saw CGI of the T. Rex, he famously (apocryphally?) said to puppeteer (and "dinosaur supervisor") Phil Tippett, "You're out of a job," to which Tippett replied, "Don't you mean extinct?" Spielberg later incorporated this line into the movie. Bad puns aside, the choice to use CGI effects significantly changed the film industry. In 1993, it took six hours to render one frame(!) of the rain-soaked T. Rex. The Tyrannosaurus' roar is a combination of a baby elephant's squeal, an alligator's gurgle and a tiger's snarl. Its sharp exhalation of breath is the sound of air escaping a whale's blowhole. The raptor "bark" is the sound of a tortoise having sex. Finally, despite its runtime of 127 minutes, dinosaurs have just 15 minutes screen time (nine minutes are Stan Winston animatronics, and six minutes are Industrial Light & Magic CGI).

THE MORE YOU KNOW!
Posted by Patrick Bromley at 2:00 PM