I'll Watch Anything!: The Oogieloves in The Big Balloon Adventure 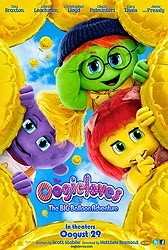 I know now why you cry.

A year and a half ago, reader Tom Bartman challenged me to write an "I'll Watch Anything!" column on the 2012 children's film The Oogieloves in The Big Balloon Adventure. I am a man of my word and I did not forget. I also realize that Tom Bartman hates me.

What is The Oogieloves? Great question. Apparently they come from a children's show called My Bedbugs that (sort of) ran from 2004 to 2005. They had very little presence in the popular culture even when the movie came out, as most Americans who came in contact with the advertising asked the same question: What the fuck is that?

We might not have watched Sesame Street, but when Follow That Bird came out in the '80s everyone understood what it was based on. The same goes for big screen adaptations of Thomas the Tank Engine and SpongeBob Squarepants and Barney and even Veggietales, for those parents who are most comfortable teaching their kids lessons from the bible using broccoli puppets. But Oogieloves? Nope. Nuh-uh. That's not a thing. 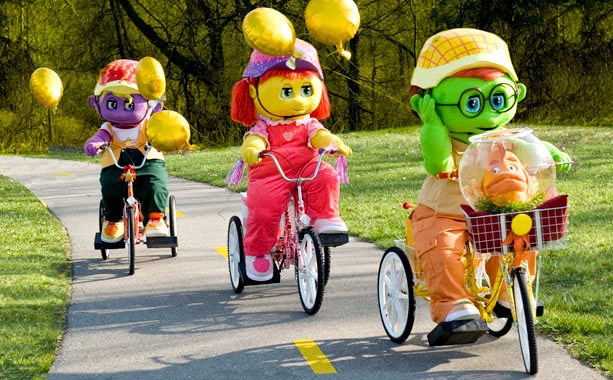 The film's box office performance bears the lack of brand awareness out, as it grossed just over $1 million on a production budget of $20 million (and, according to some sources, an additional $40 million on marketing). It was released on over 2,000 screens, meaning it grossed less than $500 per screen. There were a lot of empty theaters showing The Ooglieloves movie for those three weeks -- a truly, truly haunting image. Hopefully some smart theater chains opted to use that real estate to double up on bathrooms and let people pee in those theaters. I can think of few reviews more fitting than that.

Allow me to recap the "plot," not because there is one but because it's a usual feature of these articles. The Oogieloves are three enormous colorful children: Goobie (stab me), Toofie (kill me) and Zoozie (fuck my life) who want to throw a birthday part for their friend Schluufy, who is a sentient but immobile pink pillow, like Marlon Brando at the end of Apocalypse Now. They have some special gold balloons to give him/her/it, but the balloons are lost by their friend, a vacuum named J. Edgar. Should they buy more balloons? Of course. Do they? Hell no. Apparently, these are the last five magic balloons in all of Lovelyloveville (so much rage). So the rest of the movie consists of the Oogieloves searching for the balloons and finding them in the possession of a series of guest stars including Cloris Leachman, Chazz Palminteri, Cary Elwes, Toni Braxton, Jaime Pressly and Christopher Lloyd. They sing forgettable songs and we end the movie just a little bit closer to dying. 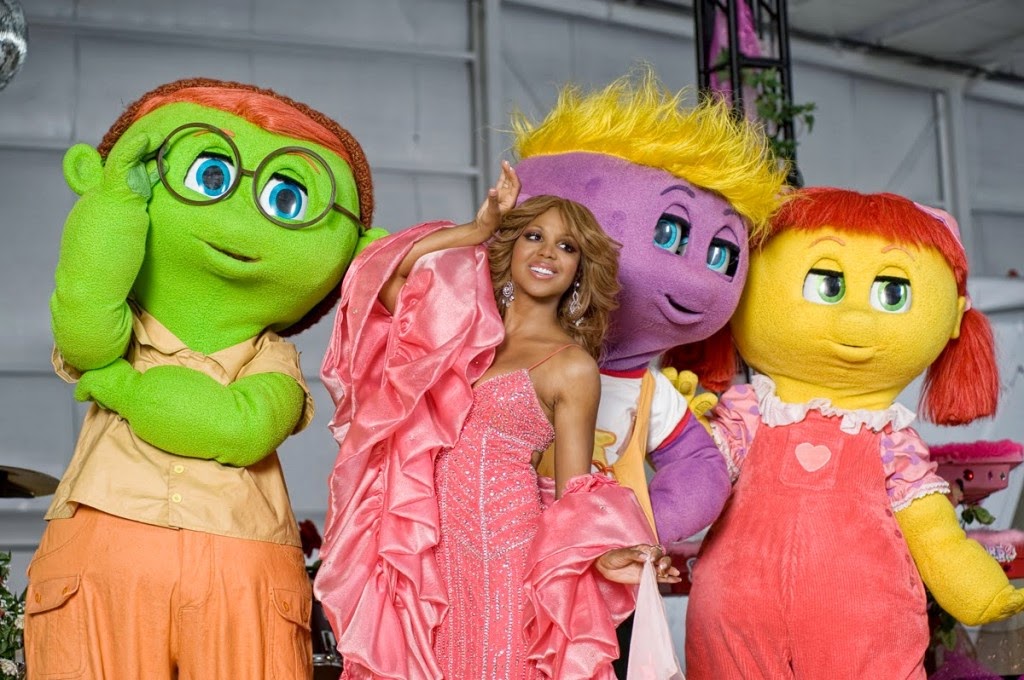 Here's the thing: I know this movie was not made for me. It is very easy to pick on something that's aimed at small children for being simplistic or stupid or annoying, because it is pitched at the brains and attention spans of five year olds. It is not my intention to do that. At the same time we recognize that most children's films are not made for us, we are more discerning of them than we are of a lot of other genres. Kids will probably like anything, but that doesn't mean they should. It is our job as grown ups to be the tastemakers for kids -- to monitor what they see and guard them from the garbage. The truth is that it's hard to make a good movie for kids. Every studio that has an animation department sees the money that's being made now and cranks out shit like Free Birds and Alpha & Omega and The Nut Job because they can, but they're derivative and cynical. It's why we respond so much to what Pixar is doing; not only do their films appeal to adults as well as children, but they don't insult the intelligence of even their youngest audience. Their movies tell kids good stories and impart lessons that aren't always simplistic. We feel like kids are in good hands with Pixar, so we go even a little overboard in our praise for them.

Oogieloves falls into that category of "bad movies for kids." Though its colorfully oversized puppet people make it seem especially innocent and childlike, don't be fooled -- it is just as cynical as any other cash grab kids' film, if not more. There's something a little insulting and hubristic about the fact that it presents these characters as though they're already an established property and we finally get to see them on the big screen.

One staple of the film is that it encourages kids seeing the movie in theaters to get up out of their seats and dance in the aisles (this is cued by some words on the screen and a bouncing turtles that tell the kids when to get up and when to sit back down). Apparently, this was something that writer/producer Kenn Viselman thought up when he was at a theatrical screening of Madea Goes to Jail. As someone who has kids and has taken them to the movies, let me say that all of my efforts go towards keeping them in their seats. Telling them to get up and dance in the aisles is inviting chaos. So fuck you, Mr. Viselman. You are wrong. The silver lining is that no one went to see The Big Balloon Adventure, meaning those calls for audience participation had about as much effect as they did while I was watching the movie at home on Netflix at 11 p.m. Cutting myself.

It's just more hubris on the part of the filmmakers, picturing theaters full of kids filling the aisles singing along with Chazz Palminteri and Cary Elwes. Wait...what? 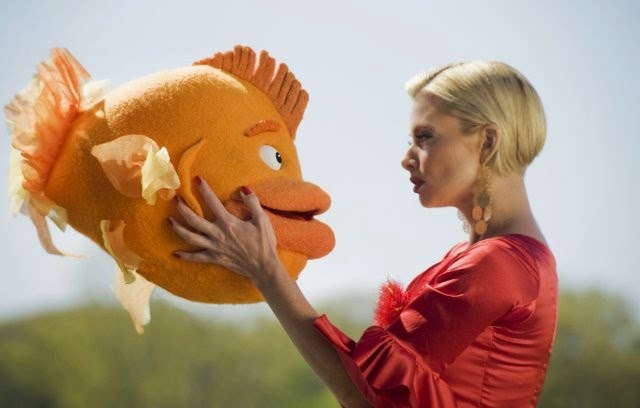 I don't know what to say about the guest stars. Each of them embarrasses themselves in ways I didn't really know was possible. Cloris Leachman can't be blamed, as she has been hollowed out and is being operated by the hand of Amber Valetta. Cary Elwes "performance" as Bobby Wobbly is the stuff of nightmares. Jaime Pressly and Christopher Lloyd play characters who are supposed to be Spanish, which can only mean that every Latino person (not just actors) turned this thing down. I know actors have to work, and maybe some of them were excited about being a part of something they could show to their kids or their grandkids. I can't speculate as to why they accepted these roles except to theorize that they got paid a lot; I don't know where else $20 million was spent, as the rest of the film has all the artistry and production value of a birthday party at Chuck E. Cheese. I can think only of the words of Doug when explaining Buzz Aldrin's participation in Transformers: Dark of the Moon: he desperately needs medicine that only the filmmakers have.

I don't want to be a sonuvabitch. This movie leaves me little choice. It's not interested in teaching children any lessons (except "Hang on to your helium balloons or you'll end up meeting Cary Elwes!"). It's barely interested in entertaining them. It's the first children's movie I can think of that drops us into it in medias res, acting as though these are characters we recognize singing songs we love with relationships we understand. There's a fish puppet that lives in a bowl and hates his fucking life (I can relate), and it seems like the filmmakers expect us to know this upfront so that every time he complains we can be all "Oh, Ruffy, you grouchy asshole fish." 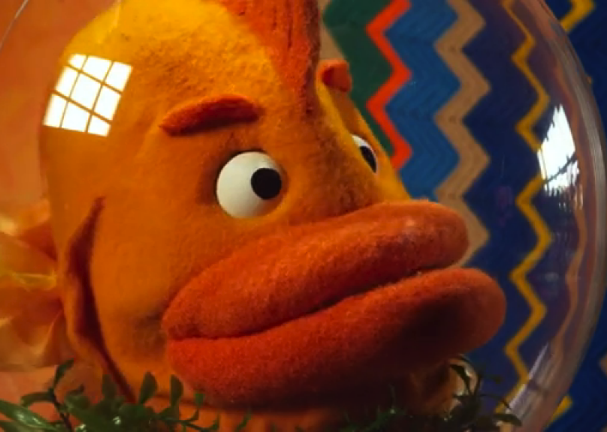 I need to stop myself, because I could go on and on about how frustrating and irritating this movie is. I know it is a noble effort to want to entertain children, but that carries with it a big responsibility. The Oogieloves doesn't take that responsibility seriously. It is repetitive and mindless and feels like a homemade movie where the director had access to a couple of celebrities that he paid a lot to show up for a day.

There are so few moments that actually stick out in my head that it's difficult to point to the specific things that don't work. I know at one point the purple guy's (I don't know which Oogielove is which and I refuse to learn) pants fall down, exposing his boxer shorts. Nothing causes it. The director just decided there was a dead spot there and needed to fill it with a good old fashioned de-pantsing. The pants falling are accompanied by a "BOING" sound effect to really hit home the humiliation. His two friends just point and laugh like bullying assholes. Then they chant -- and the bouncing ball words come up on screen -- "Oofie Toofie, pick up your pants."

I have so many thoughts.

First, why is this something that the children in the audience are being asked to say along with the other characters? It happens out of nowhere and is over before I realized what was going on, which means some four-year olds are going to have to really be on the fucking ball if they're going to join in this little shame song. Or is this something that comes up a lot in Oogieloves? Is the young audience so used to telling this Purple Flasher to get dressed that they just have this thing at the ready? Why are his pants constantly falling down? Maybe what the kids should be repeating is "Sex offender, cover your dick."

I'm stuck on this 30 seconds of film. I know. It is indicative of so much of what sucks about this movie -- the stream of consciousness storytelling, the assumed audience participation wreaking of hubris, the blurring of the line between childlike and terrifying. 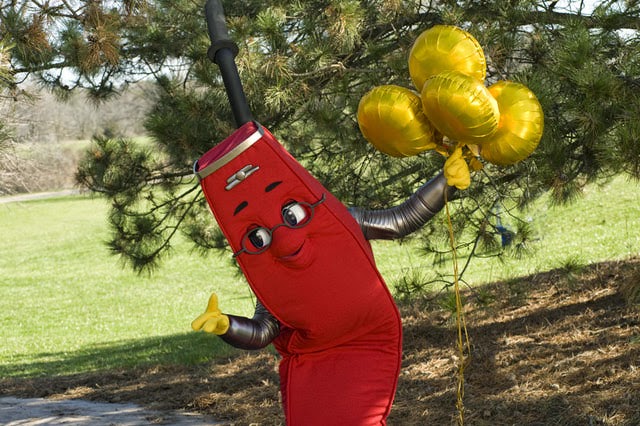 Just one scene later, we catch up with our pal J. Edgar the sentient vacuum. His name is J. Edgar. He is a vacuum named for a crossdresser who violated the privacy of everyone around him, gathered secrets and attempted to create his own little draconian society. This is in a kids' movie. J. Edgar goes back to the house and sees Window Face lady (her name is Windy Window). She pays him a compliment and he visibly blushes, suggesting he has a crush on Window Face lady and is now embarrassed. Yes, this is the children's movie in which a vacuum wants to fuck a window.

In the end, we do learn something. The balloons are recovered (spoiler) and The Oogieloves make a new contribution to science: "There's only one force stronger than the wind: love." You know what this means, right? That Interstellar has roughly the same emotional depth as The Oogieloves.

This movie tested the limits of the phrase "I'll Watch Anything!" I was happy to honor Tom Bartman's request, but I hope this doesn't set a precedent of this semi-recurring column becoming a punishing attempt to see the worst things possible. This one would be tough to beat.

And before you accuse me of being too cynical about The Oogieloves in The Big Balloon Adventure, just check out the trailer below, which confirms everything I suspected about the project. It advertises the movie as being "from the marketing visionary behind Teletubbies." A children's movie is championing a MARKETING VISIONARY.  Now that's cynical.

Email ThisBlogThis!Share to TwitterShare to FacebookShare to Pinterest
Labels: i'll watch anything, kids movies, the oogieloves in the big balloon adventure