Off the Shelf: Allan Quatermain and the Lost City of Gold (Blu-ray) 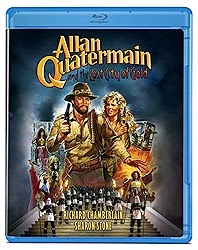 In 1985, Cannon Films released King Solomon's Mines, their version of Raiders of the Lost Ark. Two years later, they released the sequel, Allan Quatermain and the Lost City of Gold. This is their Temple of Doom.

As a riff on Indiana Jones, Allan Quatermain and the Lost City of Gold is not very good. As a sequel to King Solomon's Mines, it's only slightly better, though still a step down from its predecessor. It is a cheap, tacky movie with completely tone-deaf and offensive racist caricatures and an "exciting adventure" without a lot of excitement or adventure. Somehow I still enjoy the hell out of it. What can I say? It's a Cannon movie.

Richard Chamberlain reprises his role as Allan Quatermaine, the character first created by H. Rider Haggard in 1885. Sharon Stone is also back as Jesse, now engaged to be married to Quatermaine and living together in Africa. Quartermaine, still hungry for adventure, gets his wish when an old friend appears out of the jungle rambling about discovering the fabled Lost City of Gold and that Quatermaine's brother -- long missing -- is very much alive. Allan and a frustrated Jesse put together a search party that includes the African warrior Umslopogaas (James Earl Jones) and the spiritual Swarma (Robert Donner). After a long journey, they find the Lost City, now ruled by the high priest Agon (Henry Silva), a real dick. 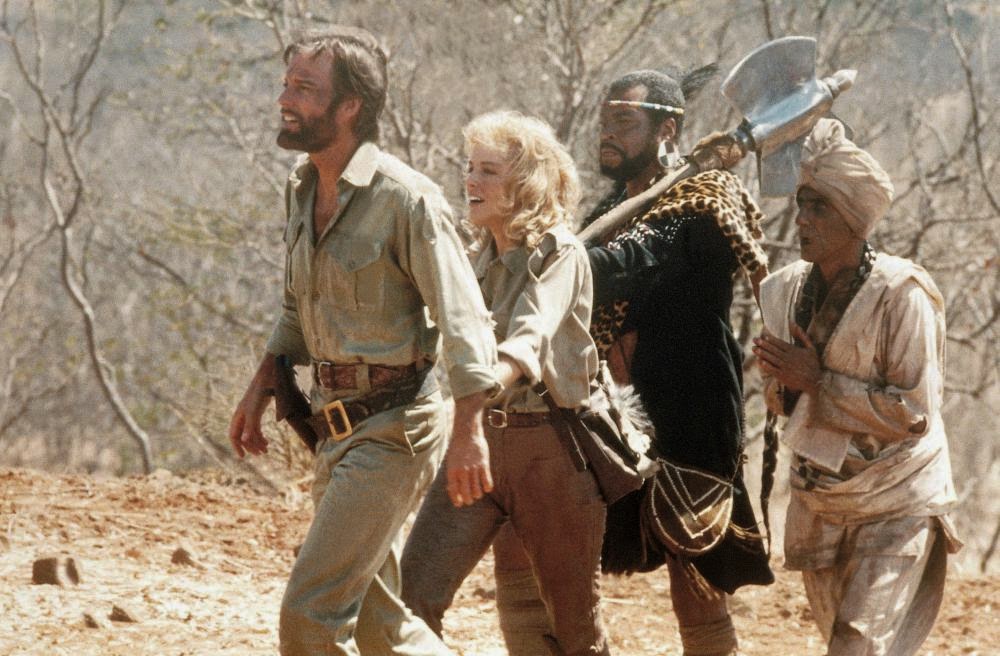 Despite being filmed more or less at the same time, there was a two-year gap between the release dates of King Solomon's Mines and Allan Quatermain and the Lost City of Gold, the latter of which is making its Blu-ray debut from Olive Films. Make no mistake about it: Allan Quatermain and the Lost City of Gold is not a traditionally good movie. Richard Chamberlain continues to be miscast as the title character; though he has the handsome good looks of a matinee idol, he plays Quatermain with the toothy smile of a game show host. He does machismo in air quotes, as though he's playing a parody of this type of character instead of the real deal. He generates no chemistry with co-star Sharon Stone; it may be for reasons that were not apparent at the time (Chamberlain's then-partner Martin Rabbett plays his brother in the movie), but it's not just a lack of sexual attraction -- they seem to not even like one another. 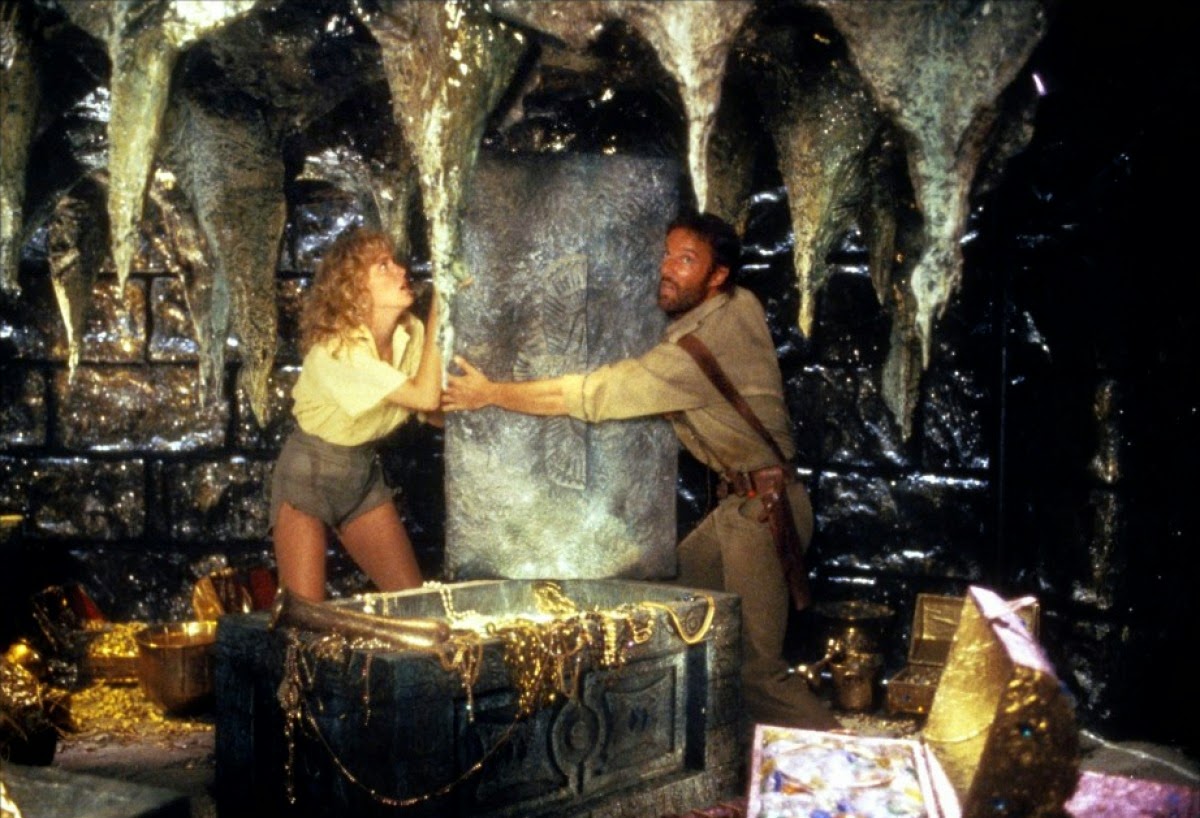 Directing duties this time around fell to Gary Nelson, who has some respectable credits on his resume (including Freaky Friday and The Black Hole) but who lacks the flair for pulp that Cannon company man J. Lee Thompson brought to King Solomon's Mines. Though his movies still felt cheap most of the time, Thompson was a guy who could make a little seem like a lot. Nelson is a guy who makes a little seem like a little, from the way he shoots the obviously fake sets to the staging of a rafting sequence through a cave, done through some of the most obvious optical effects of any '80s movie. I love that stuff, of course, but recognize that it will pull most viewers out of the movie. Those viewers have little business buying a Blu-ray for a sequel to a Raiders rip-off produced by Cannon. Know what you're in for.

Then there's the race stuff, which is way more uncomfortable than tacky directing choices. Between Shortround's broken English and its characterization of basically all Indian people, Temple of Doom's racial politics were bad enough. Now filter that through Cannon, a studio rarely known for good taste or good judgment, and Temple of Doom seems positively sensitive by comparison. Yes, the savage warrior characterization of James Earl Jones' character is tone deaf, as is the gibberish put into the mouth of Swarma, played by a caucasian actor in brown face. But compounding the problem is the constant positioning of Quatermain as the white savior of African tribes; everywhere he goes, he is greeted as a hero and a god simply by virtue of the fact that he's white (and fails to be killed by a spear at one point). The film tries to hide behind the fact that it's a historical fiction and that it's light and goofy and not meant to be taken very seriously. All well and good, but everyone should still have known better. What ought to be a fun film creates a queasiness that's tough to shake. 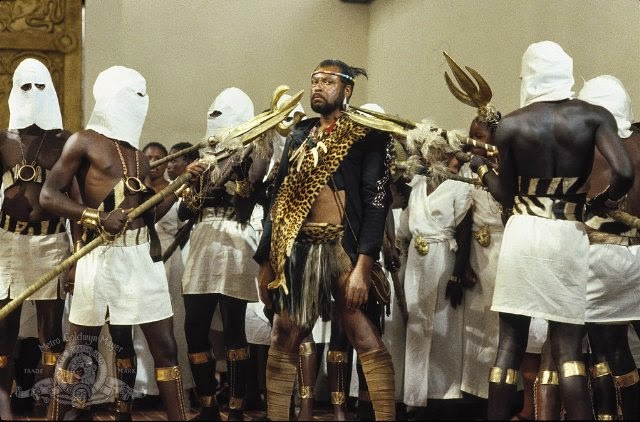 Golan-Globus made several attempts to replicate the success of the Indiana Jones franchise; there was King Solomon's Mines and its sequel, as well as the 1986 Chuck Norris vehicle Firewalker, itself due out on Blu-ray from Olive next month. Their take on series was always to ramp up the comedy, so that the imitations played like part homage and part spoof. The problem with this is that Steven Spielberg's films already had a sense of humor about themselves; they weren't explicitly comedic, but everyone involved was aware that they were pushing to adventure tropes to the limits of absurdity and pulling back before it became silly. Taking something that's already self-aware and having fun with itself and trying to make it more self-aware and comedic is redundant. It's putting a hat on top of a hat...or, in this case, a fedora on top of a fedora.

In the end, I can hardly rationalize my enjoyment of Allan Quatermain and the Lost City of Gold beyond having a blind spot for '80s Cannon movies. It's the little things, I guess, like presence of Cassandra Peterson (aka Elvira) as an evil queen, or the rubber serpent monsters that randomly attack in the middle of a movie that otherwise features no rubber monsters. Maybe it's Jerry Goldsmith's score from King Solomon's Mines, which is used over and over again (at inappropriate times, too, like when Quatermain kills an animal) despite being recycled from a previous film and another composer (Michael Linn) being credited for doing the music this time out. It's a bunch of weird little touches and shortcuts that make up the reasons I enjoy so many of Golan-Globus productions. They're like versions of movies you know and love made by aliens trying to reproduce Hollywood product after just one viewing.

Hopefully Olive is able to land the rights to release King Solomon's Mines on Blu-ray now, not just because it's a better movie but also because my OCD is having a tough time only owning one of the two movies. It's a real problem.


Buy Allan Quatermain and the Lost City of Gold from Olive Films here
Posted by Patrick Bromley at 2:00 PM