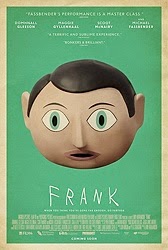 Adam Thas: Frank (2014, dir. Leonard Abrahamson) After Little Miss Sunshine, there seems to be a steady stream of quirky “indie” movies that try to catch that same hype and success. Frank is in that same genre (if you can call it that) of movie and is not Little Miss Sunshine, but definitely has enough charm for a solid two hours. Originally I was drawn to this movie by Michael Fassbender, who I seem to be a bigger fan of every time I see him on screen. It’s difficult to really say he "stars" in this movie, as he spends about 90% of the movie in a giant wooden mask (it’s not a spoiler, he’s in the opening credits), but he still manages to be wildly entertaining in the movie. My biggest surprise was Maggie Gyllenhaal, who may have found her niche playing complete psychopaths. If you are a music fan, you will probably enjoy this movie as it pokes fun at experimental music yet still manages to be respectful of the genre. At its soul it has a sweetness about it, showing who Frank is when he’s surrounded by the people that love and understand him, as opposed to who he is when he’s around the people who he wants to love him. It also touches on a theme that I really wish more movies would explore (in fact I wish this one would have explored it more) and that is of the modern “viral” celebrity. It asks a very poignant question: are you famous for being in on the joke, or because you are the joke? 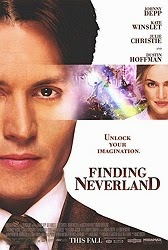 Heath Holland: Finding Neverland (2004, dir. Marc Forster) I'm not a big fan of movies that seem designed solely to make the viewer upset or cry, thus making that viewer feel like they've seen something noteworthy when they really haven't. I bring this up because I believe the marketing for Finding Neverland hurts the film by pandering to sentimentality. Look at the image of the poster above: it makes the film look like something that will be airing on the Hallmark channel this weekend (to be fair, this may be true, I haven't checked this weekend's TV listings). Finding Neverland does contain more than its fair share of sentiment, but the story of J.M. Barrie, the author of Peter Pan, is beautifully told and has higher goals than making you reach for a box of Kleenex. It's an homage to the power of dreams, imagination and the beauty of creativity, as well as how the people in our lives can fuel that creativity. The cast is great, and Johnny Depp delivers a quiet, believable performance; this was one of the last times he played a normal human being who wasn't buried beneath makeup and prosthetics, and it makes you want this guy back. Kate Winslet is as lovely and excellent as she always is, and rounding out the bill are Julie Christie and Dustin Hoffman. I'm not usually a fan of movies like this, but I'm on board with Finding Neverland and the way it depicts artistic inspiration. 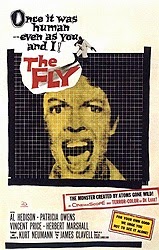 1. Vincent Price appears in one of his first horror movie roles, which would later comprise most of his latter career. Price's involvement improves any film.

3. Teleportation is still an intriguing idea (but, according to modern physicists, probably impossible)

6. One of the better "heroine screams" in horror movie history

9. THE SHOT... Oh, the shot... One of the scariest shots ever can be found at the end of this film. David Hedison's son discovers a strange-looking fly caught in a spider web. Vincent Price investigates and discovers a fly with Hedison's head as it is about to be devoured by a spider. (Shudder) That was the scariest thing I had ever seen when I first saw this film as a ten year-old. Did I mention that the little head pathetically warbles, “Help Me. Heeeeelp Meeee.” in a high-pitched creepy voice?

Joe Dante once observed that whenever this film was shown on television in the sixties, schoolchildren nationwide would roam playgrounds at recess, shrieking, “Help Me. Heeeeelp Meeee.”

10. This film inspired Cronenberg's terrific remake. (Unfortunately, not on Netflix, though strangely, the inferior sequel IS) 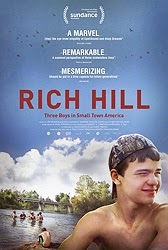 Patrick: Rich Hill (2014, dir. Tracy Droz Tragos, Andrew Droz Palermo) Maybe you're having a great weekend and want to put a stop to that. Want to get really bummed out? Well, then watch the 2014 documentary Rich Hill, which follows three high school boys (and their families) living in poverty in a small Missouri town. All three of the boys face very different challenges, and yet their challenges are all the same. These are people being failed by the promise of the American dream. It's a strangely beautiful and completely heartbreaking look at what is really going on is so many cities and small towns across the country. This is a truly great documentary.
Posted by Patrick Bromley at 12:00 PM