The Overlook: Four of the Apocalypse

According to the bonus materials on the Blue Underground release of Lucio Fulci's Four of the Apocalypse, this was one of the last "Spaghetti Westerns" ever made. I call it a "Spaghetti Squash Western" because it pretty much looks like the thing you like, but in actuality it's more like gross, hot garbage.

I have had a troubled history with famous Italian giallo director Lucio Fulci. For starters, I have hated each and every one of his films. They are tedious. They are amateurish. I guess for the time they were groundbreaking and violent, but now they come across as quaint, like the lesser works of Herschell Gordon Lewis. True, I may be biased; most of my Fulci experience has involved seeing his films during 24-hour horror movie marathons, usually in the wee, small hours of the morning—not the best time to see any movie, much less the tedious, amateurish messes that are Fulci's specialties. I was hoping his Westerns might be a different story. 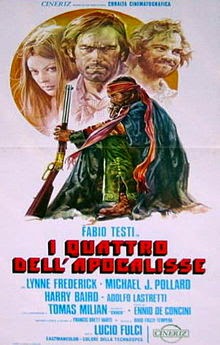 The Plot In Brief: Handsome card shark Stubby Preston (Fabio Testi) rides into town during a massacre. He escapes the massacre with local pregnant prostitute Bunny (Lynne Frederick), local drunkard Clem (Michael J. Pollard), and local cuckoo bird Bud (Harry Baird), who sees dead people. Moooo-vin' on through the desert, the four encounter the brutal Chaco (Tomas Milian) who poisons them, robs them, ties them up, rapes Bunny, and leaves them all for dead. The four manage to escape and seek shelter from the elements in an old barn. Bud makes conversation (with dead people) and bad choices (about dinner.)

Eventually Stubby and Bunny are mooooo-vin' on to a snowy city populated exclusively with rough men. The men have an unexpected reaction to Bunny's impending delivery. Soon Stubby is moooo-vin' on again—he hits the open prairie and eventually catches up with Chaco. Crude Western justice is administered.

My problems with Fulci and his films are so basic as to be self-evident: in short, babies, he is not a good filmmaker. Yes, he frames some shots in an interesting manner; but no, these separate pieces never cut together into a cohesive whole. Yes, he can sometimes coax an interesting performance from an actor; but no, these performances can never save a formless, aimless, endless film. Perhaps I am missing the post-modern significance of his shoddy technique and the non-linear editing that renders even simple sequences unintelligible... but I don't think I am. Fulci's films come off as cheap looking and poorly made, like someone working too quickly on a too-small budget. 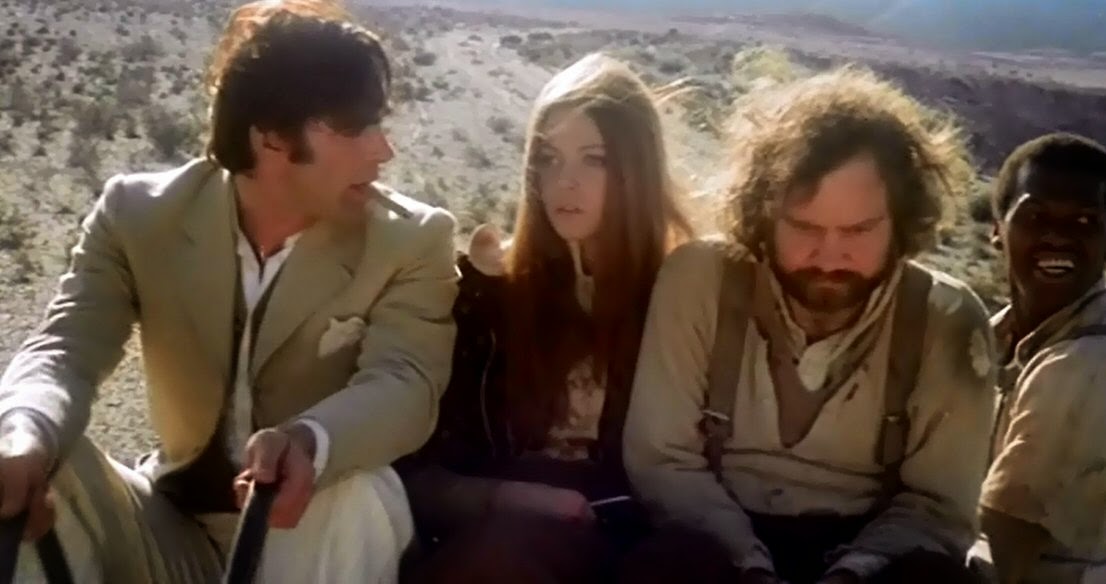 The script has potential: it is based on two of Bret Harte's classic Western stories, and a better filmmaker could have done some interesting things with the characters and situations, which are typical of the genre while taking some unexpected turns. Unfortunately, Fulci has no concept of pace, or narrative, or focus. The sequence of events in the snowy town is the most interesting thing in the movie, but it is ultimately defeated by the 90 minutes of dull material that surrounds it. Like all of Fulci's horror films, the most consistent tone of Four of the Apocalypse is one of tedium. The disc case lists the running time as 104 minutes—to me it felt more like six hours.

FULL DISCLOSURE: I fell asleep during Four of the Apocalypse. Twice. The first time I missed the last forty minutes. The second time I tried watching it, I fell asleep again but my wife tossed jelly beans at me until I woke up, so I only missed about a minute of the interminable "Rainy Barn" sequence.

Another reason I find much of this film risible is the score. Characters in Four of the Apocalypse are often shown shambling around the desert in long, long montages. These montages are scored. For the American release, lyrics were added to the score, and clearly the lyricist did not understand that most filmmakers want the score to provide "mood," not "narration." In many of the songs, the lyrics simply describe what we are seeing on the screen exactly:

Sometimes they made a stop to refresh their faces,
to fill their empty water bottles again;
how many weeks they have to keep on riding
'til their troubles end."

Other examples of song titles from this movie: "Bunny (Let's Stay Together)," "Farewell to the Friends," "Slow Violence," "Chaco," and "Stubby, You're Down and Out." I think the titles alone will tell my readers what's on the screen when that specific song is playing. Sheesh. 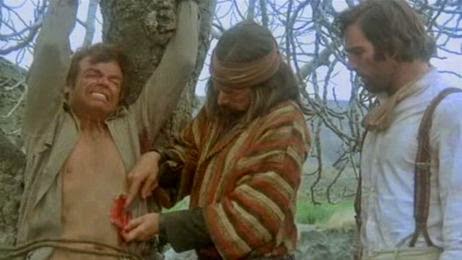 QUALIFIED ENDORSEMENT: Would I recommend Four of the Apocalypse to any sentient human? No. Would I recommend the Blue Underground disc release? Kinda yeah. The DVD includes one of my favorite bonus features of the year so far: an extended interview with two of the surviving cast members, Fabio Testi (still handsome) and Tomas Milian.

This featurette must be seen to be believed—it comes across like an undiscovered Christopher Guest mockumentary. The two actors go on and on about working with each other (something both clearly hated, though they try to be polite in a hilariously passive-aggressive way.) They also talk about working with Fulci, who was clearly a woman-hating, actor-hating lunatic. Tomas Milian, who plays Chaco, is now my favorite vain, self-obsessed, delusional actor of all time. He goes on and on about what a great performance Michael J. Pollard gives in the film—"better than me," he says—then he pauses and admits he doesn't really believe that, he was "just saying that to be nice."
So, should you buy this disc, babies? Perhaps if we agree to see the featurette as the main attraction here, we can view the film itself as a mere bonus feature. After all, I think that's the way Chaco would want it.

SIDE NOTE: Want to see an infinitely better Western? If you live in the Chicagoland area, our very own Patrick Bromley will be hosting the Chicago Film Critics Society classic screening of Blazing Saddles TONIGHT. It's at 7pm at the Elk Grove Cinema, and admission is only five dollars. Five dollars! Patrick will introduce the film IN PERSON and then lead a post-screening discussion. It is a cannot-miss event!