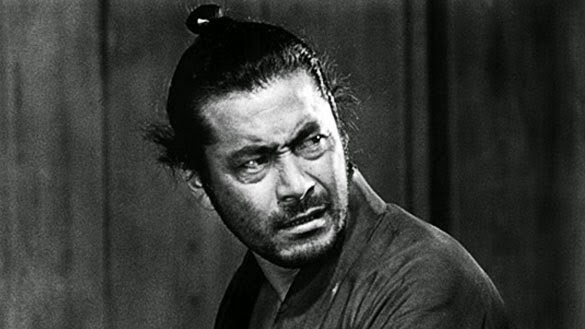 Back in college (that's right ladies), I played in a band (that's right ladies) with Patrick (that's right Erika) in which I sported a ponytail (that's right nobody). Sure, long hair on dudes is VERY hit or miss. Sometimes, it can look badass (see example #1, after the jump). Other times, you can just smell it through the screen. Like mildewy cigarette ashes. What category do these actors' coiffures fall into? 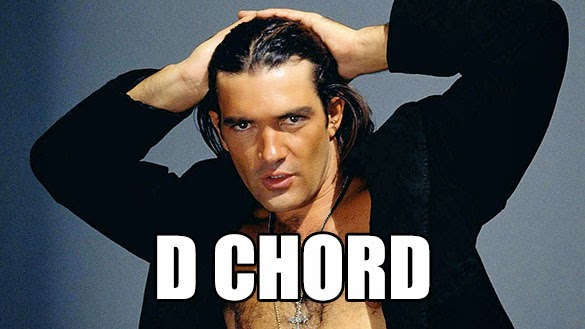 I mean, the guy just drips machismo. And, like Samson, I'm pretty sure his hair holds the key to his power. Director Robert Rodriguez wisely uses those follicles to convey different characteristics of his leading man -- tied back for business, obscuring his eyes during mysterious flashbacks, disheveled when facing obstacles ... is there any theme this man's mane can't accomplish? I think every guy with a ponytail secretly wishes he looks like El Mariachi. Sadly, that's hardly ever the case.

Ah, the late '90s grad school ponytail, worn to perfection by Scott William Winters' (a name I need to read twice EVERY TIME I SEE IT in order not confuse it with Seann William Scott) portrayal of king douche, Clark. When Clark gets schooled by Will Hunting (Matt Damon) at that Harvard bar, you can almost hear the ponytail retreat into his skull, like a shriveling penis. 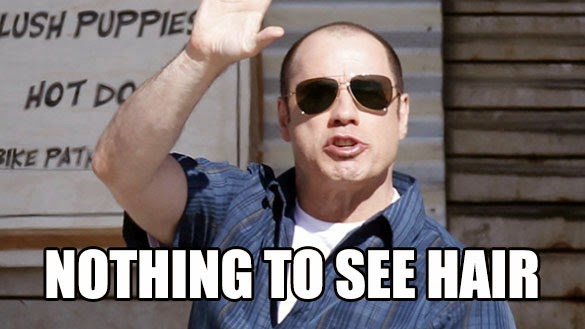 The comeback ponytail! Full of sweat, full of grit, full of purpose. A brilliant performance, to be sure, overshadowed (at the time), by the story of John Travolta's "revival" (which was also the narrative of every post-Pulp Fiction actor looking for a second chance), and undermined (now) by his exploits with Scientology and sexuality. No matter! An impartial ponytail jury has ruled that this ponytail ... rules! Sadly, extensions had to be used to get Vincent Vega's hair to look that long and thick. Because Travolta's head is a slurry of hair plugs, jet fuel and leverage. 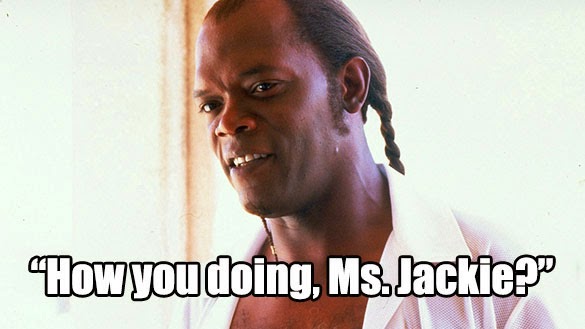 Tarantino must have a thing for slimeballs sporting ponytails. Not to be outdone by Samuel L. Jackson's Jheri curl in Pulp Fiction (three years earlier), this time the director gives the demonstrative appendage to Jackson's Ordell Robbie. Rumor has it, Jackson had additional input on the look of his character, including adding a braided goatee, various Kangol hats and his ubiquitous Raptors bag. To quote Beaumont Livingston (Chris Tucker): "You ponytail-wearing motherfucker! What the hell's wrong with you?"

5. Tom Cruise and Brad Pitt in Interview with the Vampire (1994) 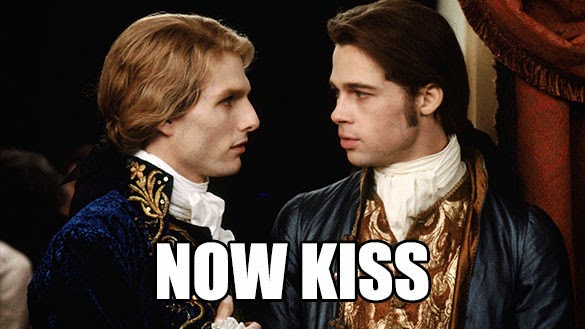 The two prettiest examples on this list. Because nothing says bloodsucking freak like two foppish dandies wearing colonial clothes with their long locks tied back in scrunchies. I know this movie (and author Anne Rice) has some pretty impassioned fans, but yeesh -- it's like they started with colorful storyboards (festooned with doilies) and worked backwards. "Not fancy enough!"

Frank T.J. Mackey (Tom Cruise) had it right. No, I'm not talking about his horrible and insulting "Seduce and Destroy" worldview toward women; I'm talking about his HALF-TAIL. While not a full ponytail (YET!), it's well on its way. You've got to start somewhere. And this top knot is far better (greasier?) than anything he donned in The Last Samurai. 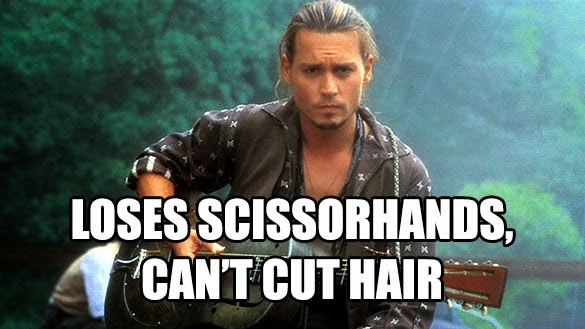 When I lived in Chicago, the local second-run theater near my house, the Davis, prerecorded their movie times for the week. When you called, you got to hear some disinterested high schooler recite titles and showtimes in the most bored monotone imaginable. Only, half the time, the kid didn't even know the correct pronunciation of the film he (or she) was describing. I'm not talking about foreign films or a movie like Synecdoche, New York. I'm talking about Chocolat. Or, as this one dude back in 2001 mumbled it, "Chocolate." Anyway, how 'bout Johnny Depp's ponytail, huh?

Really, I could've picked any Steven Seagal movie, because a.) he has a ponytail in most of them, b.) they all rule (you #HeavyAction nerds know what I'm talking about) and c.) they all sound exactly the same -- generic yet intimidating, like something from a McBain sequence on The Simpsons (e.g., Above the Law, Hard to Kill, Marked for Death, Exit Wounds, Half Past Dead, Out for a Kill, etc.). But I chose Out for Justice, because Det. Gino Felino (Seagal) not only has a ponytail, he also has the best/worst New York accent ever. The whole thing is ridiculous in the best possible way. And let's not forget to mention his third act beret and plunging V-neck vest. 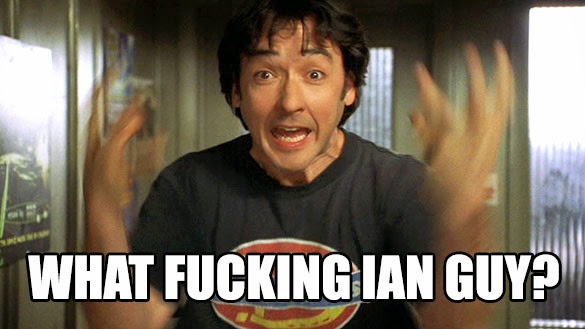 Cartoonish? Sure. But also maybe/sorta/definitely pitch perfect? Absolutely. Not to mention that Rob Gordon (John Cusack) directly refers to Ian (Tim Robbins) as "A guy with a Steven Seagal ponytail." And that's on purpose. Because Robbins does him damnedest to channel all of Seagal's new-age, Zen spiritualism into a conflict resolution Tai Chi expert who also happens to (maybe?) love Supertramp. Again, the ponytail here is spot on. 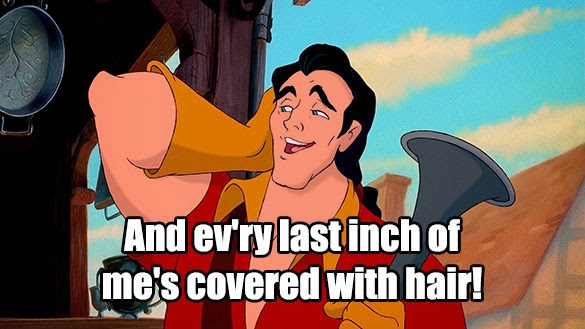 Probably the most villainous ponytail here. I mean, what kind of hirsute asshole puts a gun to a kid's head? "What? Surely you can't be describing what my memory tells me is a fun, harmless comedy from 25 years ago, Doug!" Yeah, yeah -- boys have a penis, and girls have a vagina. We all remember the same quote. But in case it's been awhile since you've seen it, a movie with the inoffensive title KINDERGARTEN COP has a scene in which a child is held hostage. At gunpoint. By his dad. The stuff we seem to forget. Go ahead -- watch the above clip, and marvel at the violence. 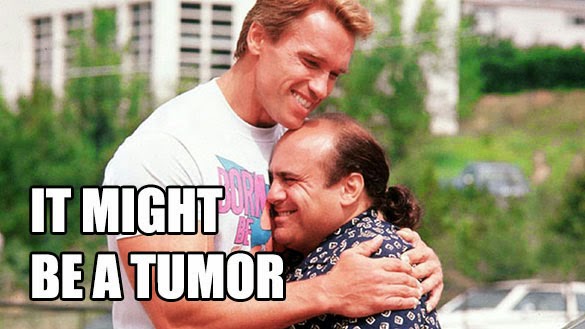 SAME HERE! Another comedy (this and Kindergarten Cop are both directed by Ivan Reitman) with a crazy violent finale, full of cat-and-mouse chases and guns and murders. I thought we were supposed to be talking about ponytails! Right, so Danny DeVito (i.e., the shitty twin) isn't physically shitty enough to look the exact opposite of uber-hunk [non-shitty] Arnold Schwarzenegger. Never mind that he's short and slightly overweight with beady eyes and an annoying voice. The filmmakers also decided to give him shitty long hair. Because nothing says really shitty than a shitty ponytail. Shitty! 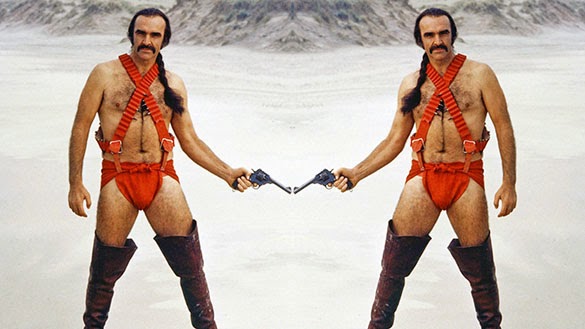