I finally got around to watching this elusive, overlooked film. I have always had a grudging respect for filmmaker Ken Russell and very much admire many of his films. Watching Lisztomania for the first time last week, I was reminded that I am not thirteen years old anymore.

Boy-oh-boy, did Ken Russell's film version of the Who's Tommy have an effect on me when I first saw it in 1975. I saw it dozens of times. I wanted to go and live in the film. I wanted Elton John's "Pinball Wizard" boots. Tommy may have been one of the first films that demonstrated to me what a director actually does, what the director brings to the party, so to speak. 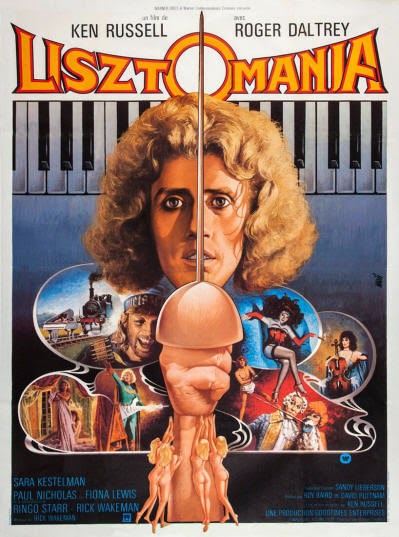 I was not able to see Russell's follow-up film, Lisztomania, during its original release because it was rated R, and I was only thirteen. The film was very hard to see after that, only occasionally popping up on cable; it was not even released on DVD until 2002! Thanks to our friends at Warner Archives MOD, I finally got to see it.

Lisztomania is awful. It may be one of the most willfully annoying films I have ever seen. Writer/director Russell takes a few facts about famous composer Franz Liszt (his live concerts were a sensation/he was Richard Wagner's benefactor, even though Wagner stole his music/Wagner's music was a favorite of the Nazis/Liszt wound up as an abbot in the Catholic church, etc.) and turns them into an obnoxious Cinemax-style "spicy, late-night" film.

While I am relatively sure that Franz Liszt possessed a penis (my thorough scouring of the historical records failed to conclusively prove he DIDN'T have a penis) and that his various paramours possessed breasts, I do not understand why a film about Franz Liszt need focus so obsessively on these anatomical givens. In Lisztomania, Russell channels his inner thirteen year-old by giving us a parade of phallus, breast, phalluses, breasts, phallic decor, breasts, breasts, breasts, a ten-foot phallus that five women dance on, breast, breast, phallus, phallus, and phallus.

I may have missed a phallus or two.

I found this film offensive, and I am no shrinking violet. Of course, by being offended, I am actually playing patsy here to Russell's artistic con game. Because he seems to know something about Liszt the man, and the film's excesses are merely Russell's artistic license, I feel I may be accused of missing the point if I find the film ugly and pretentious (which I do) or if I fault Russell with not giving a damn about Liszt or his music (which certainly seems to be the case here.)

It's as if Russell is farting in my face, and when I object to the fart, I am reminded that Russell's fart was in the service of art, because really he's MAKING A POINT about farting, so if I am offended, that's on ME. It still smells bad. Dude, what the hell have you been eating?

Imagine a breast-obsessed thirteen year-old reading Franz Liszt's Wikipedia page while devouring some bad pad Thai and then going straight to bed. The film Lisztomania chronicles the resulting nightmare. I have seen more than my share of offensive films. What rankles here is Liszt-O-Mania's aggressive offensiveness.

The Plot In Brief: Famous composer and performer Franz Liszt (Roger Daltry) is caught sleeping with Marie d'Agoult (Fiona Lewis) by her husband, the Count (John Justin). After challenging Liszt to a naked duel, the Count nails both Franz and Marie into a piano-shaped box, which he then sets on the railroad tracks in the path of an oncoming train. You know, history.

Lizst escapes the box. His live concerts are a sensation, and he is visited backstage by fellow composer Richard Wagner (Paul Nicholas, who plays Cousin Kevin in Tommy). Though Liszt plays some of Wagner's music onstage, he is upset that Liszt's version of "Chopsticks" receives more acclaim (even though Euphemia Allen didn't compose "Chopsticks" until much later in Liszt's life--I can look stuff up too, Russell!) Have I mentioned that this Richard Wagner parades around in a Donald Duck-style sailor costume with "Nietzsche" stitched on the hat?

Franz and Marie are now married, and they have three children. Franz must tour incessantly to earn a living. He is called to Russia for a series of concerts, but once in Saint Petersburg is seduced by Princess Caroline (Sara Kestelman.) This plot turn leads to a fantasy sequence involving Liszt's comically enlarged genitalia.

Wagner reappears as a revolutionary and a vampire. (Keep reading.) He also marries Liszt's daughter Cosima (Veronica Quilligan). Liszt retires to a life as an abbot in the Catholic Church. The Pope (Ringo Starr) wanders by and asks Liszt to exorcise Vampire Wagner. Labored Universal Monster metaphoric hijinks ensue. You haven't lived until you have witnessed Paul Nicholas's Wagner being "reborn" as a Frankenstein's Monster/Hitler hybrid, slaying Jews in a typical European village with a combination of his music and a machine gun. Fun.

The actors all seem adrift or slumming. You know that you are not dealing with an "actor's film" if Ringo Starr gives the least embarrassing performance. Roger Daltry, who was so good and "natural" in Tommy, here shamelessly overacts with a performance that consists entirely of three grimaces: surprise, happiness, shock (lather, rinse, repeat). 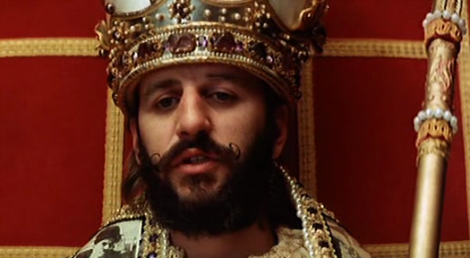 The sets are handsome in a very English way, but to what end? Russell's over-the-top, hyper-drive, everything-but-the-kitchen-sink approach works for some material (The Devils, Tommy, Altered States, Gothic, Lair of the White Worm, among others) but not for others. In Lisztomania, he seems physically or psychologically incapable of subtlety. Russell just can't help himself if ONE MORE ERECT PENIS can be shoe-horned into the narrative.

A recent documentary on The Who's Quadrophenia album included Pete Townsend arguing with the conventional wisdom that Keith Moon was the greatest rock and roll drummer of all time. Townsend—who remember, babies, was one of the late drummer's best friends—opined that sometimes, his songs cried out for simplicity, and Moon was utterly incapable of that, cramming every second of every song with unnecessary fills and filigree. Ken Russell is the Keith Moon of movie directors.

Lisztomania is available from Warner Archive as an MOD DVD. Don't.