The Overlook: The Prowler

For those babies who are die-hard fans of film noir, today we discuss a film that both rewards and punishes us for our love.

"Of course," this film reminds us, "we are always punished for our love."

The Prowler rewards our love of noir by both featuring and playing upon its most popular tropes: compromised protagonists, moral ambiguity, merciless fate, poisonous sexuality, and Old Testament retribution. I have often suggested that my love of classic Universal horror films has led me to imagine a "Spookytown" or "Universalville" that I would love to really be able to visit. Well, The Prowler plops us down in the middle of a veritable "Noir Heights" neighborhood: a lonely, seedy, fascinating place we visit at our own peril.

The Prowler drips with noir; it is double-dipped in noir. This is "film noir" spelled with a capital FILM and NOIR. It is super-noiry noir. Noiry, noiry mega-noir.

No seriously, goodbye. Because you're probably dead. 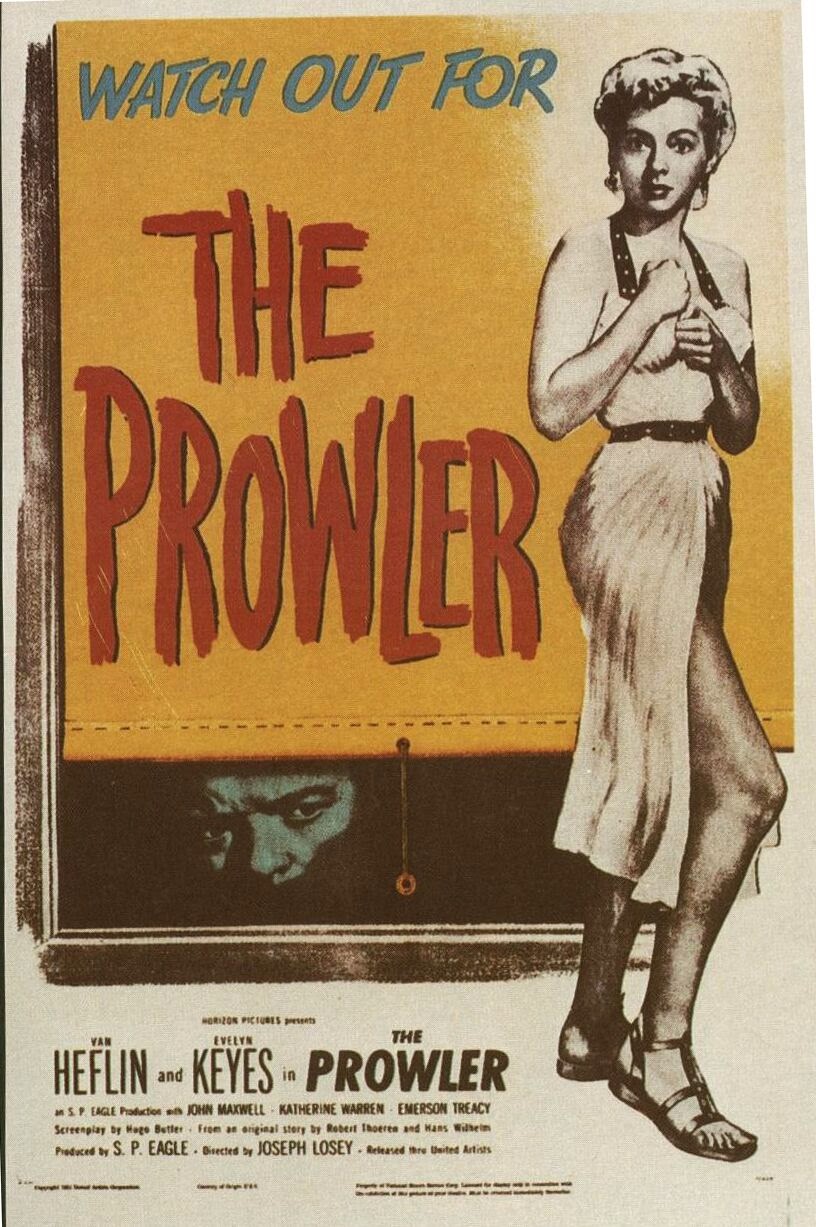 Yet The Prowler also punishes us for our love and knowledge of noir by thwarting our expectations at every turn. (Of course, if you like a movie that keeps you guessing—in the best way—this is actually a reward.) Dalton Trumbo, who wrote the script based on the short story "The Cost of Living," does a tremendous job setting up standard noir scenarios only to subvert them. Informed noir viewers will keep thinking they have it all figured out, only to discover ten minutes later that they couldn't be more wrong. We keep waiting and waiting for the twist, but when the twist comes, it is not quite the twist we expected. I watched the film for the first time two days ago, and I am still waiting for some of my predictions to come true.

The Plot In Brief: When frightened Susan Gilvray (Evelyn Keyes) thinks she sees a prowler, police officers Bud Crocker (John Maxwell) and Webb Garwood (Van Heflin) respond to her call. Gilvray explains that she is vulnerable at night, always alone while her husband hosts a popular late night radio show. 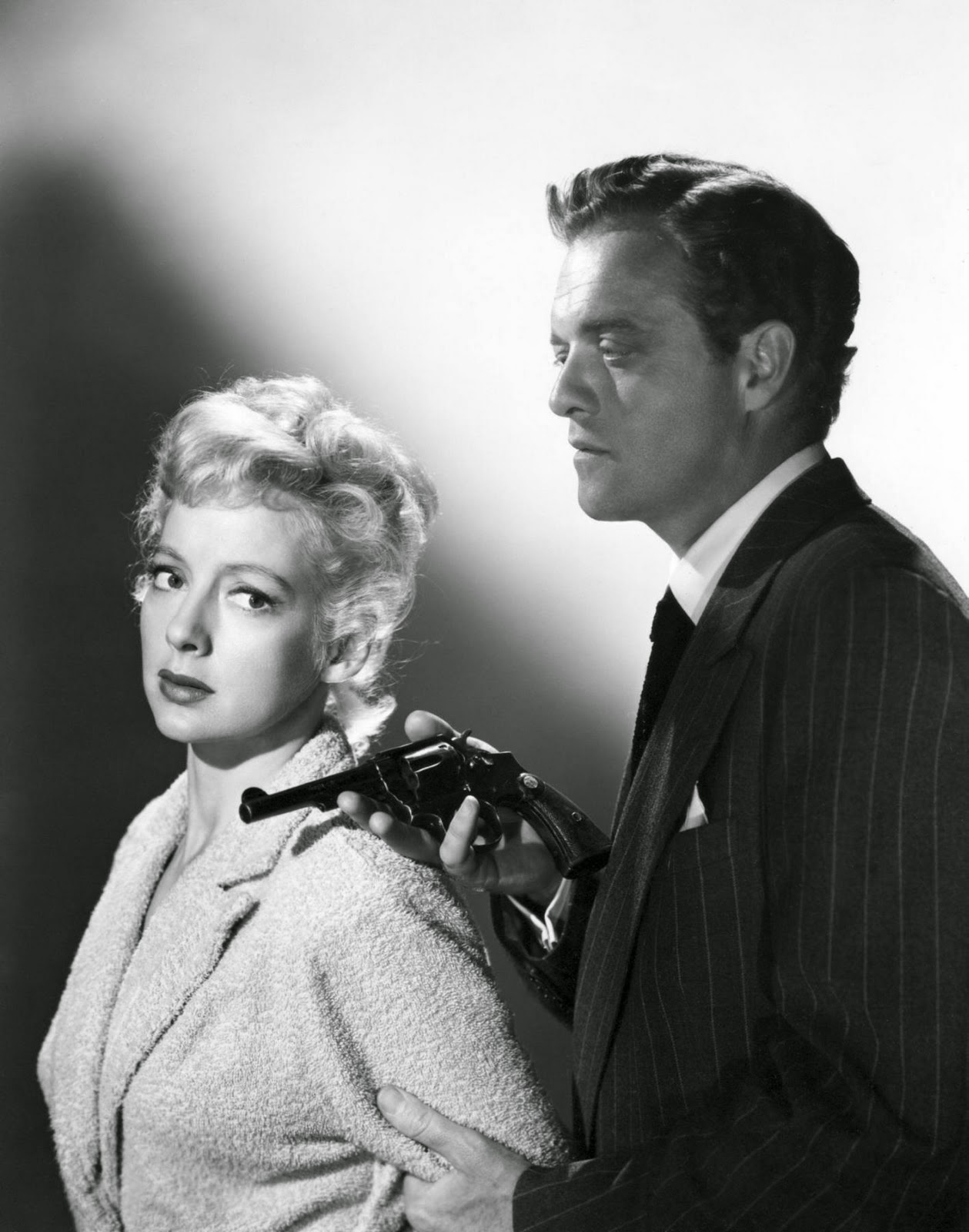 Webb returns later to check on Susan; they discover a shared past, and begin a secret affair. After several false starts, the two fall in love, but Webb realizes there is no future in it and breaks it off. Soon, the Gilvrays are calling the police, complaining of a prowler again...

I would not for the world give anything else away. The plot is properly twisty and much of the film's pleasure lies in the way astute viewers will feel sure that they know where things are headed, only to be thwarted at every turn.

The acting is one of the film's particular strengths. I always get a kick (as do most of you, babies) when familiar character actors are given a chance to shine in leading roles. Apparently, the film was something of a "divorce present" from co-producer John Huston to his then-wife Evelyn Keyes. Keyes had just finished her contract at Columbia and was eager to break free of the goody-two-shoes roles into which she'd been typecast. She couldn't have picked a better role to break out of that mold than sexual, complicated Susan Gilvray in The Prowler. One of the advantages of playing the lead in a Hollywood film (especially a Hollywood noir) is that the protagonist is usually more complicated and nuanced than the supporting roles. 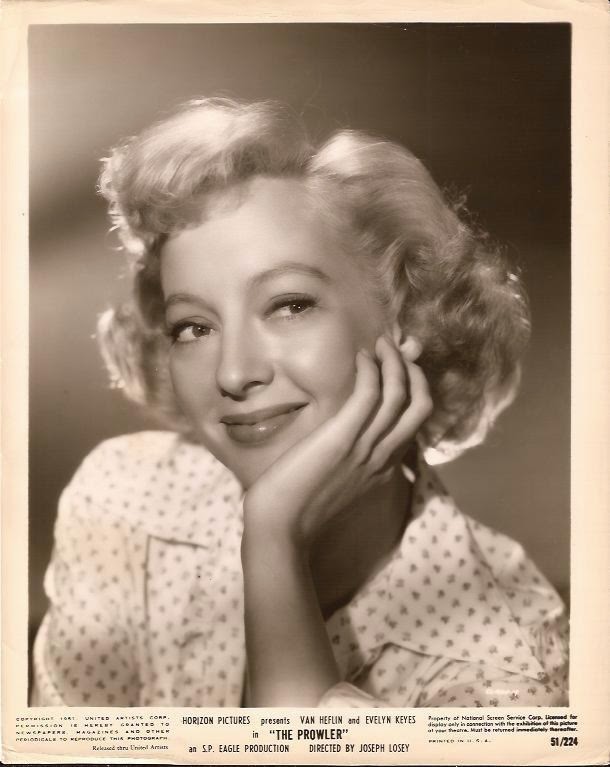 Van Heflin, too, had just completed a lengthy contract at MGM, and this was his first film as a free agent. I have always been impressed by Van Heflin's ability, and I bemoan the fact that he didn't get many opportunities to show it off. Heflin is the lead in The Prowler and it only makes me wish he had been given this kind of opportunity more often. This is the man who played both the sweaty, nervous bomber in Airport and the honest, hardworking father in Shane.

Because The Prowler was a low-budget independent production and a negative pick-up for United Artists, it became very hard to see for decades. The Film Noir Foundation/UCLA Film and Television Archive restoration is stunning. I doubt the film looked this good when it was first projected. Many critics consider it ex-pat filmmaker Joseph Losey's greatest film, and no one was surprised when, decades later, it was revealed that credited screenwriter Hugo Butler was just fronting for the blacklisted Dalton Trumbo (who cameos as the radio voice of Susan's husband in the film). 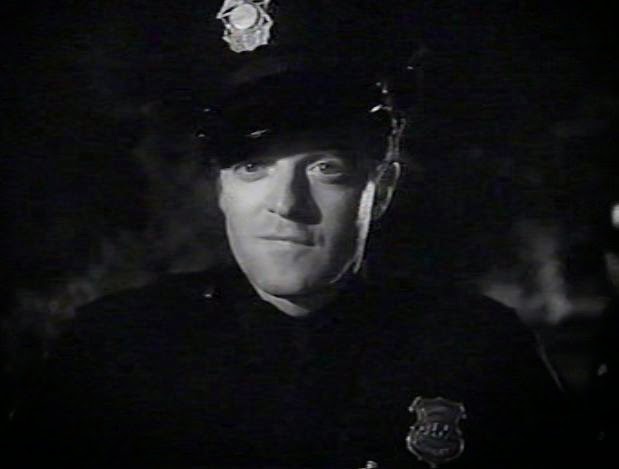 The film also contains what is now one of my new favorite film noir images: a man desperately running away up a hill of sand. The police are right behind him in hot pursuit. For every few desperate steps he takes, he actually slides farther down the hill. Up and then down, forward and then back. It's Sisyphean—the iconic struggle of the noir protagonist.

In the bonus features of the new VCI Blu-ray, Eddie Mueller of the Film Noir foundation tells a funny story about the film's wrap party. The Prowler was such a low-budget film that the cast and crew chipped in to pay for the party's food and drinks. They later found out that money had been budgeted for a proper cast party, but when producer Sam Spiegel (identified in the opening credits as S.P. Eagle) received all their collected money, he just kept it. Spiegel was famous in Hollywood for skipping out on his debts and flim-flamming studios out of money.

Just in case I have been uncharacteristically coy in the above paragraphs, know this: I loved The Prowler. Loved, loved, loved it. Loved every twisty, hard-bitten minute. Watching The Prowler as a noir fan is like slipping on a comfy pair of old slippers... but once your feet are inside, you realize they are not your slippers at all. Are they someone else's slippers? Where did they come from? Are they maybe even better than the slippers you thought you loved? Why are these slippers full of sand? I cannot believe that I had never seen or even heard of this film before. I wish I had seen it when I was twelve years old, so I would have been able to spend more of my life loving it. When people asked me what I wanted to be when I grew up, I would have slipped on my most noiry-noir air of mystery and pre-teen resignation and sighed, "a prowler, baby. THE Prowler."

VCI International released The Prowler on DVD back in February of 2011 and on Blu-Ray just last Tuesday! Needless to say, it is highly recommended.