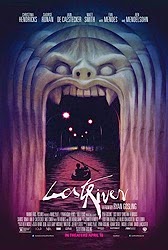 Great news, Ryan Gosling fans! He broods behind the camera, too.

Ryan Gosling likes a lot of cool movies. If you want proof of this, just check out his directorial debut Lost River, which plays like a CliffsNotes edition of his DVD collection. The movie doesn't wear its influences on its sleeve. It dresses in a shirt made entirely of influences.

As an actor, Gosling has his strengths: he is talented but largely silent and mysterious, in recent years becoming synonymous with cool. Much of that describes his first film as writer/director, too; it is ponderous and short on dialogue and it desperately wants to be cool. In many cases it achieves it, though it is a Hollow Cool. Gosling appears to have learned a lot through his collaborations with Nicholas Winding Refn, with whom he made both Drive and Only God Forgives. He apes Refn's visual style, his pacing and his lack of interest in a conventional narrative. Unfortunately, he missed out on some important lessons, like how to make a movie that feels like his own. 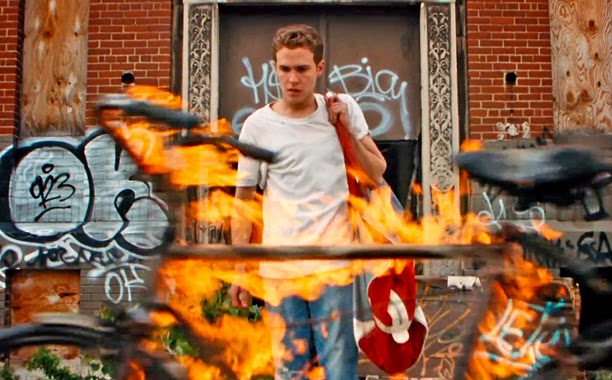 Christina Hendricks plays Billy, a single mom struggling to make ends meet and facing not just eviction but the straight up demolition of her home. In trying to help out and save the house, her grown son Bones (Iain De Caestecker) crosses the town's biggest and baddest criminal Bully (Matt Smith), who spends the rest of the movie trying to retaliate against Bones and his friend Rat (Saoirse Ronan). Meanwhile, Billy takes a job at some weird club in which the performers act out scenes of violence straight out of a giallo. Do all of these things come to a head? Of course. Do they have anything to do with one another? Not really. Do they look great? You better believe it.

Yes, Lost River is spectacularly photographed by Benoît Debie, the gifted cinematographer responsible for shooting Irreversible, Enter the Void and Spring Breakers. Taking a page from Dario Argento -- particularly Suspiria -- every shot in Lost River is bathed in bright reds and pinks and blues and purples and every shot is stunning. It's the kind of movie from which almost any individual frame could be taken out of context and be hung on the wall as art. Gosling clearly has an eye and a sensibility, even if it's just a sensibility he's picked up from watching David Lynch and Terrence Malick and Argento. 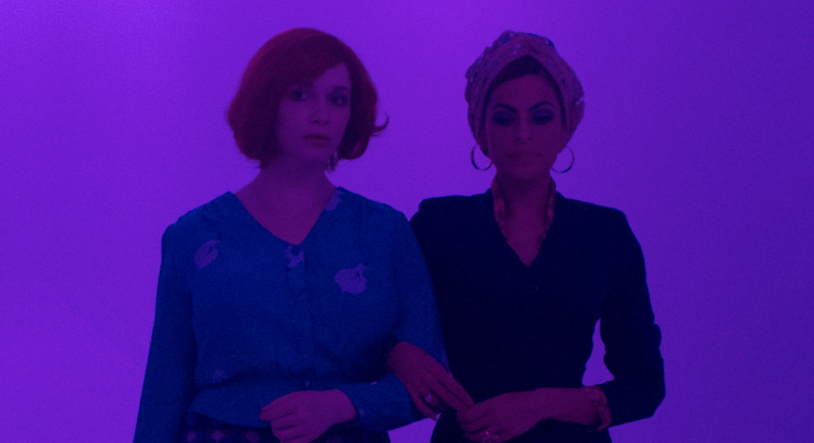 The movie owes a lot to Argento, actually, and to all Italian horror. It's present in the giallo club (not a thing) and in the lighting and in the overall vibe, where the visuals are striking in the moment but don't always add up emotionally. And in case you don't get it, he casts Barbara Steele (!) as Saoirse Ronan's grandmother; she doesn't speak a line of dialogue, but she's Barbara Steele and that's all Gosling is interested in from her. She's a signifier in a movie full of signifiers.

Lost River is imitative, and not the way in which Tarantino is so often accused of being; he has absorbed a lifetime of movies and regurgitates them as something uniquely his own, whereas Gosling's movie is just a pastiche of stuff he likes. But for as imitative as it is, Gosling wants it to feel unlike anything else. His script aims for "unconventional," but is actually just obtuse and often pretentious. He throws in bizarre elements and images as non-sequiturs hoping to give the appearance of art, but too often it comes off as having the depth of a grad student's thesis film. It's full of nonsense like a scene in which Ben Mendelsohn (playing the lecherous owner of the giallo club [not a thing]) sings because Gosling loves Blue Velvet, or another scene in which a character is trapped in a plastic shell and it seems like the darkest, most fucked up stuff is about to go down -- it's the stuff of nightmares -- but then all that tension is destroyed by having someone start dancing because Gosling thinks it would be weird or funny. The characters have names like Bones and Bully and Rat and Nick. Wait, no, the actual rat is named Nick. It makes sense in this movie that only the rodent would have a normal name. 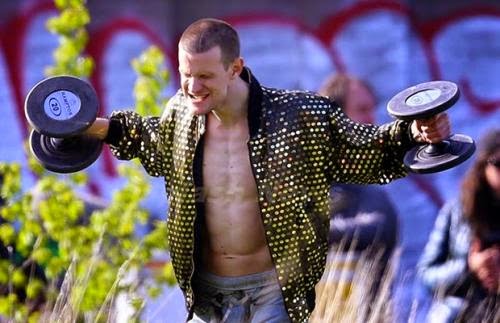 Christina Hendricks is the only actor in the movie to give a performance worth mentioning; most everyone else is a placeholder. Mendelsohn gives good menace (of course), but the others are blanks -- they act by not acting. Not true of Matt Smith, who doesn't just act but ACTS as this movie's riff on Frank Booth. Half of his lines are just him shouting at the top of his lungs -- not words, just actual shouting. It's not scary and it's not deranged, mostly because it's trying too hard to seem deranged. Smith's performance is bad, while Gosling's conception of the character has air quotes around it. The same could be said for too much of the movie.

If we're grading on a curve because it's his first movie, Lost River isn't bad. It looks and sounds great and proves that Gosling shows real promise as a director once he comes up with something original to say. By its final 15 minutes, when all of the story threads are cross-cut to Johnny Jewel's pulsing score, the movie kind of works. Lost River is all very watchable if only because I like all the same kinds of movies that Gosling does. It's the sort of thing that will eventually find life as a midnight cult movie (provided that's still even a thing in five or 10 years) and will almost certainly affect a generation of kids who don't know that he's cribbing from other movies. Hell, I'll probably like it myself in a couple of years.

Lost River is currently available on VOD and iTunes.