The Overlook Looks at Books!

This week, babies, we put away the moving picture show, and we pick up a goddamn book.

Though it's hard to believe they've been around this long, I have been enjoying BFI Film Classics books for more than two decades. They are the film literature equivalent of potato chips; I can never eat just one. For a time, these addictive little tomes were my "go-to choice" whenever a family member asked, "what do you want for your birthday?" (Well, second go-to choice. I'm still waiting for that pony, you selfish bastards.)

To date, BFI has published more than 150 of these handsome volumes; I believe my current collection numbers 53 (hint, hint). These concise, well-written and well-researched monographs are essential reading if you love film. I am devoting this week's column to recommending them. 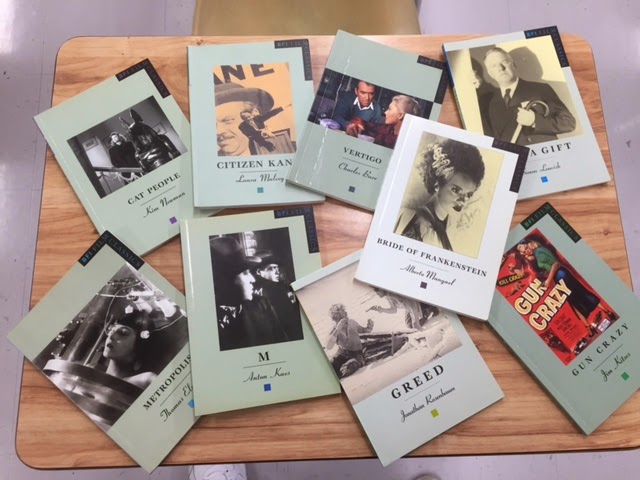 During my last ten years of teaching Film Studies, I used these books for a student project. At the beginning of a new semester, I would ask students to choose a BFI book about a film that interested them. Students would view the films, read the monographs, and then prepare individual presentations on what they thought of a) their films and b) the theories presented in the books and whether or not they agreed with them. Students had the entire semester to accomplish these tasks and the resulting presentations were the final exam. One sad thing about not teaching that class anymore is that I no longer get to see how the BFI Film Classics books could turn kids on to films that they would never otherwise watch in a million years. I also miss seeing all the resulting presentations, which were often excellent.

NOTE: If any of my readers would like to do this assignment, simply choose a book, screen the film, read the book, and record yourself talking about both. Send the resulting video file to F This Movie! as an attachment. I will grade it! (Grades are non-transferable to any accredited academic program. But you and I will both know how you did, won't we?)

A random sampling of cool things I have learned from reading these fine books:

Back To The Future: The risible "Indy hides in a lead-lined fridge during a nuclear bomb test" scene from Indiana Jones and the Kingdom of the Crystal Skull was a left over scene from Back to the Future. Director Robert Zemeckis never filmed it, and Producer Steven Spielberg remembered it from all those years ago. That's why Zemekis and co-writer Bob Gale are thanked in Indy 4's closing credits.

Jaws: Showing incredible attention to detail, author Antonia Quirke has some interesting things to say about evil mayor Murray Hamilton's attempts to quit smoking in the film. It's chilling; I don't want to spoil this one.

The Wizard Of Oz: Salman (The Satanic Verses) Rushdie loves The Wizard of Oz; he wrote the BFI monograph on it.

Groundhog Day: Author Ryan Gilbey points out that teachers can easily empathize with what Bill Murray goes through in the film—we too find ourselves, because of our class schedules, doing the same things over and over and over again. 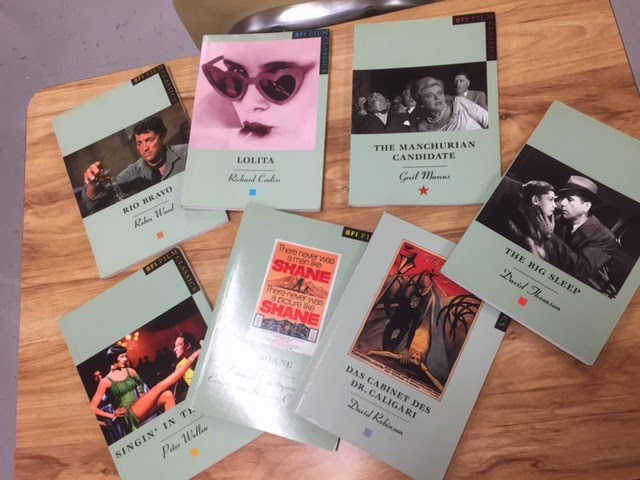 I cannot think of another film series where I have never regretted reading a single entry. Even the least good of these small, fine books is head and shoulders above what usually passes for film criticism in our modern age. Because each book focuses on a single film, babies, you will find it easy to seek out only those volumes that discuss your particular favorites. The editors of the series have very high standards; many of the authors are lecturers on film and media at various British universities.

CAVEAT: Perhaps they are trying to appeal to some twisted collectors' mentality, but lately the fine folks at BFI have been republishing popular older titles with newly commissioned cover art. This can get confusing because I have not (yet) memorized nor purchased all the titles available, and when these repacked volumes are announced, I always assume it's a brand new text. 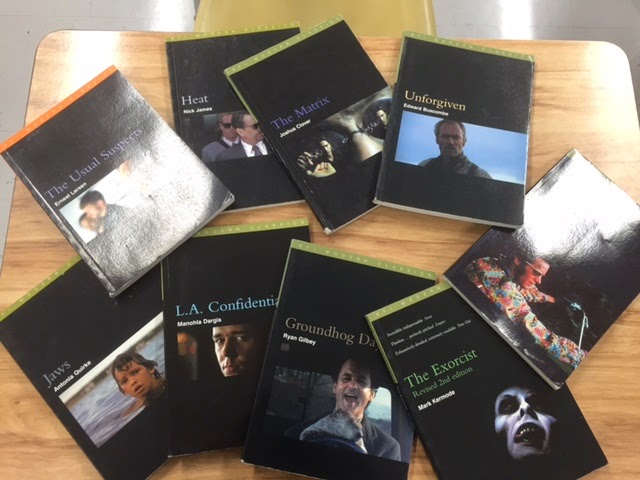 Here's a list of every BFI monograph published so far. For the sake of clarity I have conflated both the "Film Classics" series and the "Modern Classics" series into a single list. Most of these volumes are available from Amazon.com; the average cost per book (new) is about seventeen dollars. BFI is also slowly making select volumes available on the Kindle and Nook e-reader platforms at a slightly reduced price.

Titles with an asterisk (*) are particularly recommended.

1994:
The Passion of Joan of Arc
It's a Gift
Boudu Saved from Drowning
Blackmail
Brief Encounter
In A Lonely Place
Lolita 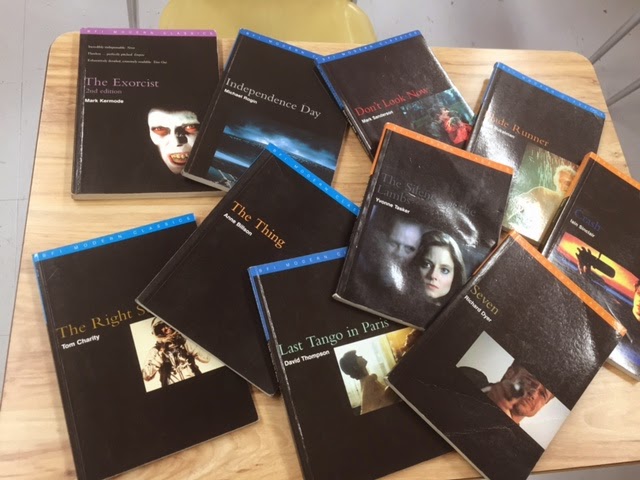 1999:
Shane
The Magnificent Ambersons
Fires Were Started
L'Argent
Titanic
The Wings of the Doves
Se7en*
WR - Mysteries of the Organism
Caravaggio
Crash 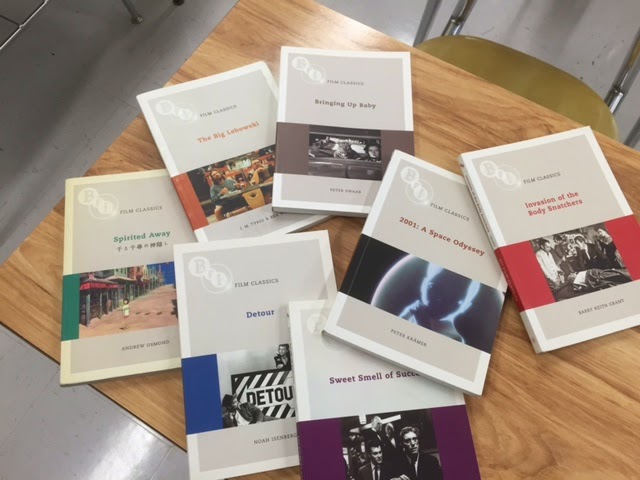 2002:
The Blue Angel
I Know Where I'm Going
The Manchurian Candidate
To Be or Not To Be

2004:
Viridiana
In the Realm of the Senses
if...
Andrei Rublev
Groundhog Day*
Nosferatu*
The Matrix
The Thin Red Line
Unforgiven
Withnail and I 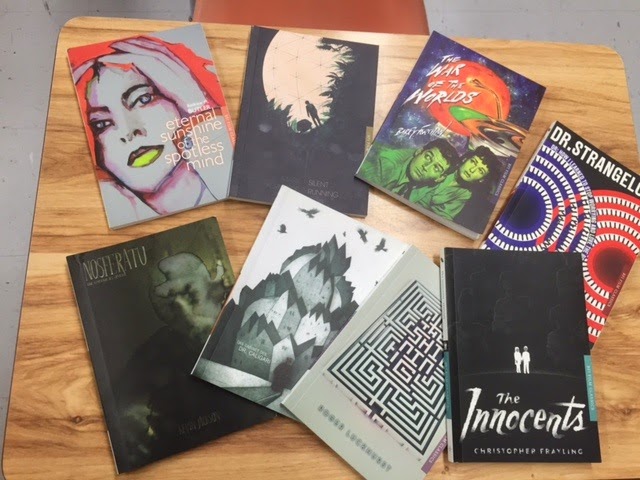 2011:
Bringing Up Baby
Invasion of the Body Snatchers (1956)
Grey Gardens
The Best Years of Our Lives
Meshes of the Afternoon
Far From Heaven
Shoah
The Servant
Victim

2013:
Tales of Hoffman
The Innocents
Pan's Labyrinth
Written on the Wind

And Coming Soon in 2015:
Toy Story
The Sound of Music
The Birth of A Nation
The Gold Rush
An American In Paris
Head On

So let's all get started reading, babies! If you have read any of these and have an additional favorite, please mention it in the comments below. Class dismissed.
Posted by Patrick Bromley at 5:00 AM