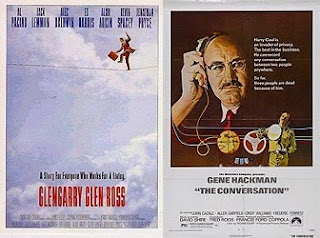 For this installment, Adam Riske and I decided to do ourselves and everybody a favor by watching some classics that we had inexcusably never gotten to. Adam watched Glengarry Glen Ross (1992) off of my unwatched list, and I saw The Conversation (1974) for him. We felt… mostly guilty.

Adam Riske: Just about everything. 1) The Conversation is supposed to be a great movie. 2) It's directed by Francis Ford Coppola back in his heyday. 3) It stars Gene Hackman and co-stars John Cazale. 4) The character Hackman plays in this movie inspired the character he plays in Enemy of the State.

Mark: I've watched a few clips and the trailer, and I was totally intrigued by David Mamet's dialogue and a murderer's row of all-star tough guys posturing to do something relatively innocuous by selling real estate. It's got tons of profanity. It has a weird title. Who's not into this?

Dear cultural slackers, if you found these movies so interesting, then why hadn't you gotten to watching them yet?

Adam Riske: I never had anything pushing me to see it. For example, I've seen a lot of '70s classics because they were playing at the Music Box Theater so it gave me an excuse to see them, but I've never had that with The Conversation, so I always opt to watch something else even though it's really easy to find.

Mark: I was a little scared to watch Glengarry Glen Ross because it looks really intense. That would be fine if I was watching this in a theater, but it's less appealing when I'm browsing through choices to watch at home, when I want something a little less emotionally taxing at the end of the day. It also looked a little conventional in format, and when weighed against some more outwardly intriguing choices, it didn't feel as appealing.

Adam Riske: That movie's for closers. I get why it would give you anxiety. 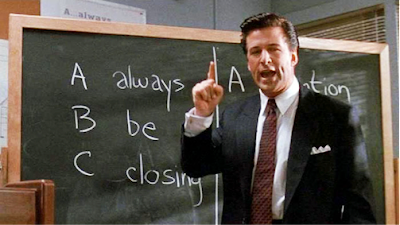 Adam Riske: The movie is brutal and a real guy's-guy movie. I know you like those. This movie is dripping with machismo and toughness.

Mark: My middle name is Machismo Toughness, holmes. (Which would make my full name Mark Machismo Toughness, Holmes Ahn). The Conversation is a slow burn, with very deliberate camera work and sparse dialogue, and the story goes in some delightfully interesting directions. Gene Hackman plays a role different than his normal fare, acting the part of a bookish, shy perfectionist. The sound design and music is fantastic, which is appropriate in a story that is obsessed with the recording of sound.

Adam Riske: Would he have worked at Sound Warehouse? Remember that store? It was like Best Buy before there was Best Buy. I bought my singles tapes there. Now I make singles tapes in my bedroom...for dating. I'm just kidding. Or am I? This has gotten off-track.

Mark: I picture him more as the buddy of the weird guy who records sound in Upstream Color. Sound Warehouse lives in my memory as a sad place. I just remember those big plastic sleeves they attached to all of the CDs and tapes. 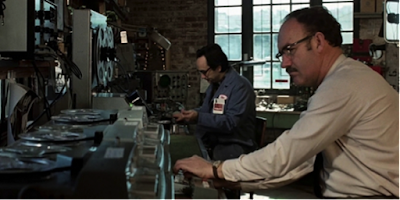 Adam Riske: Certain characters are very unlikeable, but I think if you can get past that you'll enjoy it on the whole. Jack Lemmon can be especially grating but that fits the character he's playing perfectly. It's an amazing performance even though it's tough to watch most of the time.

Mark: It is honestly difficult to pick out something unlikable. Perhaps a young Harrison Ford is not to your fancy? I think the deliberate pace might bother some people, as would the ambiguous ending, but it's still a consistently engaging film.

Adam Riske: I read that when a character in this movie is in a position of power, they chew gum.

Mark: I learned that Gene Hackman was frustrated playing the main character because he was so different than Hackman's natural personality, but Francis Ford Coppola claims that Hackman sees it as the best performance of his career. 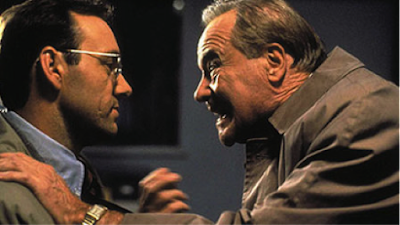 Glengarry Glen Ross and The Conversation are comparable to what other movies?

Adam Riske: American Buffalo, which is another movie based on a David Mamet play. Glengarry Glen Ross has a more interesting story and better characters.

Mark: Coppola said that the movie was significantly influenced by the movie Blowup (1966). It has a lot in common with tense thrillers like Rear Window, where the protagonist sees the conflict but is sort of outside of it. I think a good recent comparison would be the French movie Cache (2005), which also deals with surveillance and misdirection, or One Hour Photo, because it has that distant main character.

Adam Riske: I like Cache and One Hour Photo. Why have I not seen The Conversation?? 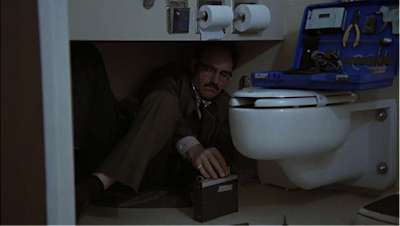 If you are planning a film marathon of three movies, and one of them had to be the movie you watched, what other two movies would you put in the marathon? Why?

Adam Riske: I would say another Mamet movie, so House of Games (1987) which is great if you haven't seen it, and The Wolf of Wall Street because it's another great movie about shady businessmen.

Mark: I kind of like the through-line of latent paranoia and fear, so I would put this with Cape Fear and A Scanner Darkly. Three pretty different movies but a common thread. And then stay up all night staring at the ceiling, wondering about the state of the world.

Adam Riske: I like Cape Fear and A Scanner Darkly. Again, why have I not seen The Conversation???

Mark: You’re not a closer.

Buy or rent to watch these movies?

Adam Riske: Blind buy it. You won't regret it. It's a clinic of great acting and super re-watchable.

Mark: I have a hard time recommending a blind buy for any movie, but I think this one is worth purchasing, especially the Blu-ray that comes with some nice extras.

Adam Riske: Matt Murdock from Daredevil and Val Kilmer in At First Sight had to blind buy everything.

Posted by Patrick Bromley at 8:04 AM