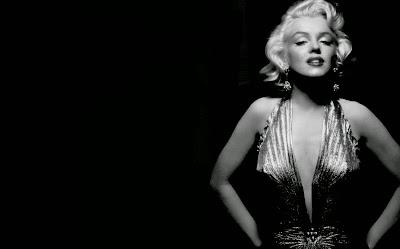 I once dissected a song which led to falling in love with a movie star.

One of my favourite songs, and in fact the first song I ever dissected, is Billy Joel's “We Didn't Start The Fire.” Oddly enough, while my capacity for memorization could be qualified as nothing more than shitty, I can sing the whole song on command at any time. In fact as I write this, I am singing it aloud, so that I can prove to myself that this is indeed a fact. (Nothing worse than a liar!) So feel free to approach me and demand this song at any time and you shall be dazzled by the one skill I acquired in the eleventh grade that has stuck. BAM!

We were each given a short section of the song and asked to investigate the meaning behind each historical name or event. This was one of the most fun and entertaining ways I had ever been taught about eventful people and moments in our recent history (1949-1989), and is in fact something I continue to enlighten others about to this day. (HAHA, like right now, suckers... You had no idea this was going to be a history lesson! I will get to my point now, but I'll bet those of you who where unaware of the meanings within the song will be doing a bit of Googling now). Anyways, I was given the second line in the song, beginning with Joe McCarthy and ending with Marilyn Monroe, which turned out to be my kickstart into a love affair with all things Marilyn. 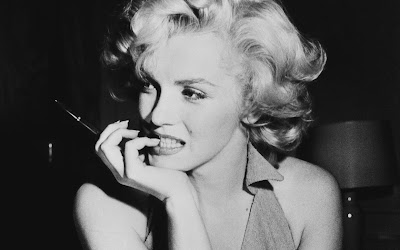 I mean really. Name one other person who has had such an impact on generations of authors, musicians, filmmakers, artists and people from all walks of life. Musicians reference her in their lyrics (I stopped counting at fifty, here be a few: Tom Waits, the Red Hot Chili Peppers, Blondie, Bon Jovi, Michael Jackson, Jay-Z, and of course my personal favourite that continues to draw at my heart-strings, Elton John's “Candle in the Wind”), not to mention bands being named after her, or one of her films (off the top of my head The Misfits and Norma Jean). And are you able to think of another scene more widely used in films and television than the subway grate scene in The Seven Year Itch? I can't. But that could be due to my brain being in Marilyn mode right now. 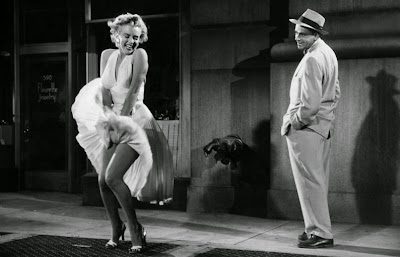 After learning more about her via my line in Billy Joel's song, I began to seek out films about her so that I could begin to experience her the way she wanted the world to see her. With no instant on-demand movies at my fingertips and my movie library being virtually non-existent, I did what any broke teenager would do: headed to the library. Turns out it was a treasure trove of VHS proportions and I began with Niagara (1953 directed by Henry Hathaway), a film noir that was unlike all other film noirs of the time, as it was in Technicolor. Centred on her seductiveness, the film gave Marilyn top billing and elevated her to star status almost overnight, although it was notably due more to her sexuality than that of her performance.

The look created for her in Niagara was carried over in the next few films and later that year we were given more of Monroe, in comedic performances that enhanced the “dumb blonde” persona. It's actually painful to admit that I did not get to watch these movies until quite recently. I was talking with my friend Brittany a short while ago about our shared love of Marilyn and discussing how odd it was that we both had not seen a large portion of her films. Simple explanation: Marilyn was so captivating that it only takes one performance to fall in love with her! I have spent the last little while catching up on her movies and did my best to watch them in order of their release date. 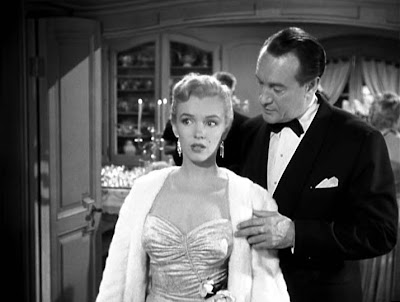 I went back to one of her first on-screen appearances in 1950's All About Eve (directed by Joseph L. Mankiewicz). I loved the movie, everything about it, but it came so very much more to life when Marilyn arrived and went on to perform so memorably during each scene in which she appeared. It made perfect sense to me that this was one of the first films to launch her career; I couldn't get enough of her brief moments on-screen, and I am but one person experiencing her performance sixty-five years after the fact. I can't even imagine what it would have been like to have been a part of a generation of filmmakers and film-lovers during her time and discovering her potential in real-time.

And again, although she only briefly appeared in Howard Hawks' Monkey Business (1952) alongside Cary Grant, all eyes are glued to her every movement. I really REALLY loved this movie, for so many reasons, Marilyn being but one of them. 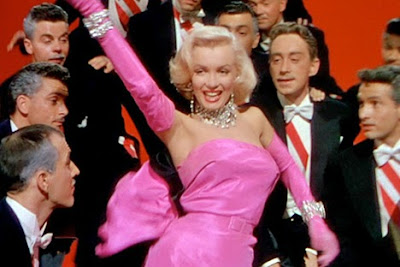 Gentlemen Prefer Blondes (1953 directed by Howard Hawks) stars Monroe and Jane Russell as best friends and showgirls Lorelei and Dorothy, the former who seeks out men specifically for their money in order to become “financially successful” and the latter attracted to beautiful men. The role required Marilyn to act, sing and dance and I don't know about you, but I love a good 1950s musical, of which there are many! Her iconic performance of “Diamonds are a Girl's Best Friend” has inspired homage by Nicole Kidman, Madonna, Christina Aguilera, James Franco (HAHA!) and many others, and I am sure there will be more to come.

Next up on my list and also from 1953, How to Marry a Millionaire (directed by Jean Negulesco) had Monroe acting alongside superstars Betty Grable and Lauren Bacall. This comedy centres around three women with the solitary goal of marrying a wealthy man; however, along the way they discover that finding true love does not necessarily come with money. Not quite my favourite of her films, but the more I see of her, the more I fall in love. It seems that with every performance of hers I take in, I learn a bit more about the woman I have admired for years.

Otto Preminger's River of No Return (1954) was filmed almost in my backyard (an eight hour drive from Saskatoon is totally backyard claimable). And it's not that I'm going to be one of those people that travels to all these places to claim they “stood in” or “slept on” or “ate where” Marilyn did, but I am totally dragging my husband on a trip to Jasper and Banff National Parks to do just that. We have been gifted with an appreciation for beauty, and the combination of both the scenic Rocky Mountains with one of the world's most beautiful women is entirely mesmerizing. 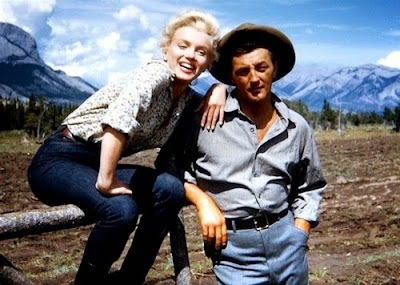 Speaking of an eye for beauty, holy hell did Billy Wilder ever get it right with persisting until he had his perfect take with Marilyn's most iconic scene, the subway grate in 1954's The Seven Year Itch. We have all heard about how notorious she was with missing her lines, but time and time again I have heard or read and seen for myself that when Marilyn gets it right, she can captivate a world. If acting were easy, everyone could do it.

Her 1956 performance in the dramatic film Bus Stop (directed by Joshua Logan) was charming and garnered her a Golden Globe nomination for her role. It was followed by The Prince and The Showgirl, which I unfortunately did not track down in time to watch for this piece. However I did give My Week With Marilyn (2011) a re-watch, its premise being that of the tension between Sir Laurence Olivier and Marilyn during the production of The Prince and the Showgirl. Not quuuuite the same, but it filled the gap for this purpose. If anyone has a copy to lend me of The Prince and the Showgirl, I would love to borrow it. Just send it to Igloo #7, The Great White North please.

And lastly, not only my absolute favourite of her films, but one of my top 10 favourite movies, is another Billy Wilder film: 1959's Some Like It Hot, of course. For me, this is the most re-watchable, most loveable, most perfectly Marilyn. From her singing to her wide eyed, innocent looks to her witty one liner exchange with Tony Curtis, this film is perfection in every facet for me. Haven't seen it? If there is one to watch, this it. 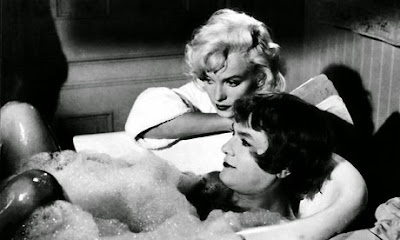 Marilyn Monroe set out to overcome a childhood of abuse and neglect and strived to pursue a dream that must have kept her going through all the terrible periods in her life. I can barely imagine how a seemingly overnight rise to fame could have been so wonderfully exhilarating, yet at the same time paralyzingly debilitating, to be surrounded by people who may or may not have had her best interests at heart. To live your life in the public eye and to have no escape into any form of quiet comfort.

Even with a life cut far too short, what she has become today is so much bigger than any imagination could have conceived. How could it be that the same performance in the same film has growth from viewing to viewing? How is it that the same lines delivered in the same footage have a different impact and effect? For most, a performance captured on film repeats itself time and again... Marilyn has somehow managed to overcome the finality of being captured on film and continues to re-invent her performance every time she walks onscreen.

“We are all of us stars, and we deserve to twinkle” - Marilyn Monroe 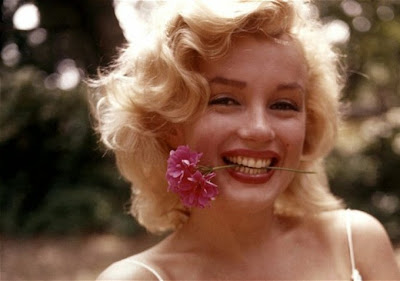 Email ThisBlogThis!Share to TwitterShare to FacebookShare to Pinterest
Labels: 1950s movies, classic movies, marilyn monroe, some like it hot, the seven year itch