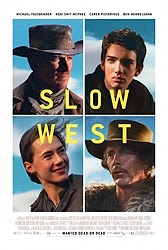 Oh boy, this movie is terrific.

The western has experienced something of a renaissance in the last decade. After disappearing for most of the '80s and '90s (with the occasional exception -- a Pale Rider here, a Tombstone there), the genre came back around 2007 thanks to some high-profile and brilliant entries like No Country for Old Men and The Assassination of Jesse James by the Coward Robert Ford. In the years since we've seen a number of really great westerns, like the Coen Brothers' True Grit, last year's The Homesman, Django Unchained. Later this year we'll be getting several more: Bone Tomahawk, Quentin Tarantino's Hateful Eight and the Ti Western In the Valley of Violence. It would appear the western is back in a big, bad way. Enter Slow West.

Young aristocrat Jay Cavendish (Kodi Smit-McPhee) travels from Scotland to the American West of Colorado in search of Rose (Karen Pistorius), the girl he loves and wishes to marry. With no idea of what to expect from the harsh western landscape and no real knack for survival, Jay teams with Silas Selleck (Michael Fassbender), a bounty hunter interested in partnering with Jay for reasons that go beyond the fact that he's being paid. As the two navigate their way to find Rose, they are pursued by Ben Mendelsohn wearing an enormous fur coat and leading a team of fellow bounty hunters looking to cash in on a big reward. 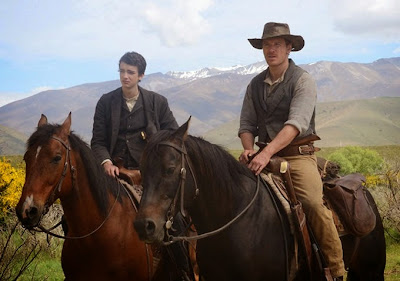 In his debut feature, musician-turned-director John Maclean (formerly of The Beta Band) has done something remarkable: he has announced a distinct personal voice inside the framework of a larger and firmly entrenched genre. The presence of an authorial voice is not novel to the western, but what shines through of Clint Eastwood in Unforgiven or Andrew Dominik in Assassination of Jesse James is more those filmmakers' views on the Western genre itself than a unique personal statement. Slow West doesn't just comment on the Western -- though it does do that very well -- but more importantly announces the arrival of an exciting new voice in cinema. I get such a sense of who Maclean is as a filmmaker based on his work here, from his visual sense to his rhythms to his sense of humor to the offbeat way he sees the world.

Here is a movie that doesn't just juggle tones throughout its running time, but throughout its every moment. There isn't one scene that's funny and another that's sad and a third that's thoughtful; Slow West is all of those things simultaneously and more. There are beats in the film that are at once shocking in the brutality of their violence, heartbreaking in what is suggested and, yet, hugely funny (I won't say what it is, but there is a shot in this film that made me laugh harder than any movie this year). Maclean's West is a place of both danger and absurdity -- his camera off-kilter, his editing staccato and deliberate. Violence happens quickly and out of nowhere; it is brutal and bloody and over as fast as it began. It is not without consequence, either. There is a montage near the end of the film that seems so straightforward and obvious but which carries a devastating impact -- everyone paid the price for taming the West. Each act of violence is deeply felt. 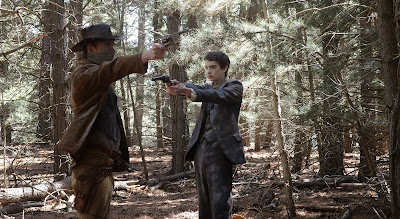 Fassbender is great because he's always great, here doing a variation on Clint Eastwood's Man with No Name. Like Eastwood's performance in Leone's Dollars trilogy, Fassbender's work has air quotes around it. Almost everyone's does, as they're playing somewhat exaggerated types: McPhee the naïve tenderfoot, Mendelsohn the colorful villain. But no one is spoofing western tropes, nor are they winking at the camera. They're playing with archetypes while fully retaining every character's humanity -- yes, even the bad guy -- and the result is a film that feels so much like every other western while managing to also feel totally original. Have I mentioned that I really, really liked this movie?

Slow West will be in limited theatrical release and on VOD beginning May 15th. While it's hard to argue with the convenience of watching it at home, you must see it in a theater if you can. This is a haunting, beautiful movie that deserves to be seen on as big a screen as possible. Of the nearly 20 movies I saw in seven days at the Chicago Critics Film Festival, this might just be my favorite.