The Overlook: The Devil is a Sissy

Today we discuss an older film that is just the gosh-darnedest thing.

Clearly, what first attracted me to the little-seen 1936 MGM programmer The Devil Is A Sissy was its title. Would the Devil show up in the film? Who would play him? My money was on Mickey Rooney. Would he indeed be a "sissy"? How would the filmmakers show him to be a sissy, exactly—sobbing over a scraped knee? Maybe the Devil would see a little mouse, and then would jump up on a stool eeeeking with a screamy voice, and then there would be a close-up of the mouse laughing at him. Is the word "sissy" a micro-agression? Against whom? What about the word "devil"—or is "The Devil" more of a proper name, like "The Fonz"? These are the questions that kept me out of the really good schools.

I was also attracted by the cast; this movie stars three of the most popular juvenile performers of the 1930s. How would their very different acting styles mesh? Were there fistfights on set, as there are in the film? Who would win these off-screen fistfights? My money was on Jackie Cooper; he looks scrappy. I learned through the courtesy of IMDb that at various points in his career, Jackie Cooper played characters named Skippy, Swipes, Scooter, Midge, and Dink, but alas, no Scrappy. This seems like a missed opportunity. 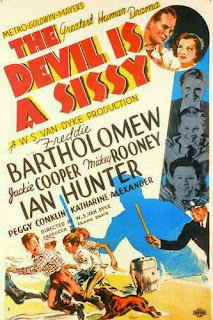 The Plot In Brief: Claude Pierce (Freddie Bartholomew) arrives in New York City to spend the fall with his father. Claude is a child of divorce who spends half his year with rich mother Hilda (Katherine Alexander) and the other half with poor-but-proud father Jay (Ian Hunter). Thrust into a public school system very different from the boarding schools he is used to, Claude soon runs afoul of local tough guys Buck Murphy (Jackie Cooper) and Gig Stevens (Mickey Rooney). After a series of hazing rituals, the boys become fast friends.

This sounds like a raucous comedy, but Gig's dad is a famous criminal who is given the chair. Yes, the ELECTRIC chair. The rest of the film concerns the boys' efforts to raise enough money to buy him a proper tombstone. Yes, a TOMBSTONE. Because if there are two objects that belong in any "boy's adventure" film, those two objects are an electric chair and a tombstone.

The most interesting aspect of The Devil Is A Sissy is its labyrinthine plot and its inability to pick a single genre. Is this film a standard "slice of life" drama from the mid-1930s? Sometimes. Is it, in fact, a boy's adventure film? Sometimes. Is it a gangster picture? For about ten minutes, yes! This film reminded me of the Bollywood films that suddenly shift genre every ten minutes until they have covered all the bases, thereby qualifying as a "full evening of entertainment." A very good reason to watch The Devil Is A Sissy is that, if at any given moment the film is not pleasing you, it will obligingly switch genres to something you may like better. 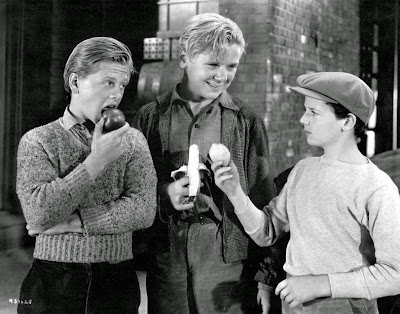 The scenes with the divorced parents are the stuff of soap opera. The school stuff seems like a blueprint for the latter Bowery Boys comedies. All of the gangster stuff is played straight until late in the film when more gangsters show up (one of them in drag) as comic relief, but then the gangsters realistically punch the boys, kind of a lot. A plot turn near the film's conclusion switches the film to tear-jerking melodrama. Did I mention the film also features a musical number? It does! In the middle of the film, the boys visit Gig's Aunt Rose, who tries to cheer them up with a song. The boys all join in too. The song is "Say Ah!" which was written by Arthur Freed and Nacio Herb Brown, whose catalog later became the basis for Singing In The Rain.

One of the reasons for the film's apparent indecision might be that during shooting the film's original director, Rowland Brown, was replaced by W.S. Van Dyke, who reshot most of Brown's footage. Rowland Brown is an interesting historical footnote at MGM; he was continually being replaced mid-shoot by other directors. 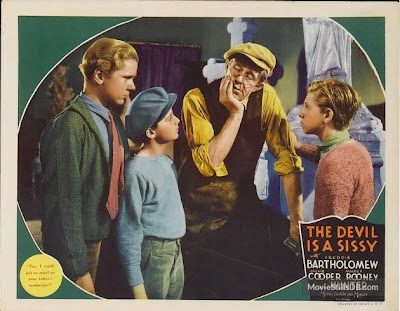 The Devil Is A Sissy is a fascinating glimpse at three very different child actors at three very different stages of their careers. It is the point at which three lines intersect, never to connect again. Freddie Bartholomew here is coming off his tremendous success earlier in the year with the film that made him a star, Little Lord Fauntleroy, and right about to begin a production that would take an entire year to film and cement his status as one of the great child stars of the 1930s, Captains Courageous. Jackie Cooper, on the other hand, is nearing the end of his child star days. Cooper was one of the original Little Rascals in Hal Roach's "Our Gang" shorts and co-starred with Wallace Beery in some of the most beloved boy's adventure films of the early '30s, including The Champ and Treasure Island. Mickey Rooney is just starting out—he'd scored a triumph as Puck in the previous year's A Midsummer Night's Dream, and was only two years away from the MGM Andy Hardy pictures and Judy Garland musicals that would make him the number one box office attraction of 1939, 1940, and 1941.

Many skilled character actors familiar to all who love films of the 1930s make appearances here, but none are given enough screen time to really make an impression. Gene Lockhart, lovable Bob Crachit in the 1938 A Christmas Carol, shows up as Buck Murphy's dad and reminds the audience of his range by thrashing his son with a belt, kind of a lot. Grant Mitchell, well known from such Frank Capra favorites as Arsenic and Old Lace and Mr. Smith Goes To Washington, made nine films in 1936, one of which was The Devil Is A Sissy. I tend to recognize some of these character actors more by voice than face. Jonathan Hale, famous for playing a judge in dozens of MGM films, here plays a judge. 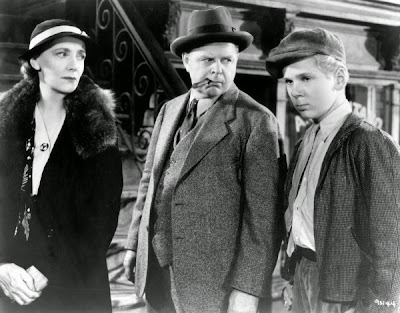 The Devil Is A Sissy rewarded me in ways that only a truly unique film can. The film is a slice of history, a slice of life, a fascinating genre exercise thirty years ahead of its time, a bracing jolt of social realism, a buddy comedy, a musical, and a good old-fashioned tearjerker. That's not bad for 92 minutes, babies. Not bad at all.

Email ThisBlogThis!Share to TwitterShare to FacebookShare to Pinterest
Labels: 1930s movies, classic movies, mickey rooney, the devil is a sissy, the overlook