“Weird West” is a term that got its start in comics during the 1970s, but strange tales that offered a supernatural or gimmicky twist on the traditional western movie go back to the silent days of cinema. Here’s a look at some of the notable movies that took a few distinct genres—usually western, horror, or science fiction—and combined them to make something truly weird.

The earliest weird western I’ve found is a 1926 film called Haunted Range. It goes back to the silent days of cinema and features a plot about a cowboy who must solve a murder in order to inherit a ranch. Standing in his way is the murderer himself, a black rider who may or may not be a ghost.

A few years later, John Wayne got in on the spooky action as a man who inherits a haunted mine in Haunted Gold. A number of cheap B-pictures and serials from the ‘30s told stories that had cowboys like Gene Autry investigating seemingly supernatural occurrences, no doubt fueled by the Universal monster movies that were scaring the pants off filmgoers at the time. Evidence of this appears in a 1937 movie called Riders of the Whistling Skull, which actually goes so far as to incorporate a mummy into the action. 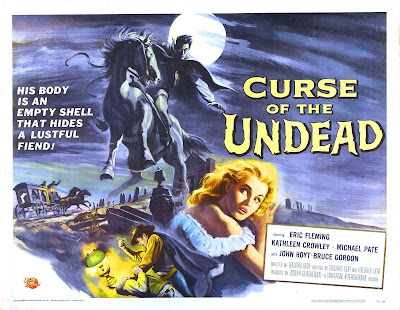 Things cooled down for a while, with the next significant weird western coming in 1956 with The Beast of Hollow Mountain, in which a stop-motion dinosaur terrorizes the Mexican countryside. What I consider the modern weird western really got a kick start in 1959 with Curse of the Undead, a film that had Universal jumping into the fray. With their biggest monster hits behind them, the company that made Dracula, Frankenstein, and the Wolf Man had seen success with their 3D movie Creature from the Black Lagoon and its two sequels, and decided to close the decade by making Hollywood’s first vampire western.

In Curse of the Undead, starring Eric Fleming and Michael Pate, there’s a new gunslinger in town, and it looks like he’s a vampire. What’s more, this vamp can walk around in sunlight and isn’t beholden to a lot of the superstitions and rules that controlled the previous Universal vampires. With an undead killer loose and women in town dying mysteriously, the only way for the good guy to put the creature down for good is by shooting him down with cross-engraved bullets. This movie is so fun that both Universal Monster fans and western buffs claim the movie as their own.

In 1966, a company called Circle Productions released a weird western double feature with Billy the Kid versus Dracula and Jesse James Meets Frankenstein’s Daughter. Both full-on exploitation films were directed by the same guy, William Beaudine, and were light on horror and high on camp. At least Billy the Kid Versus Dracula manages to put John Carradine back in the role of Dracula, which he had appeared in two decades earlier with Universal’s latter-day monster movies House of Frankenstein and House of Dracula. If the movies themselves aren’t great, at least the spirit of fun that they aim for is. 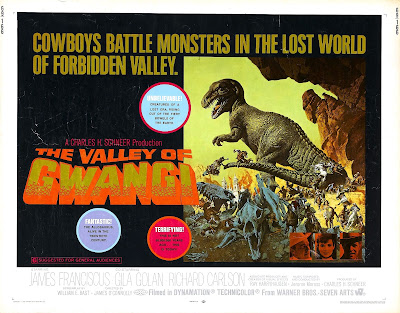 1969’s The Valley of Gwangi takes the concept from King Kong and transplants it to the west. A cowboy captures a dinosaur that he found in Mexico (in a place called “the forbidden valley.” Nothing good ever comes from places that have “forbidden” in their title). The cowboy then tries to market it as a circus attraction. Mayhem ensues. The cool thing about this one is that Ray Harryhausen did the stop-motion effects and served as one of the producers.

By the 1970s, the idea of a supernatural western had infiltrated the mainstream. Clint Eastwood directed and starred in High Plains Drifer in which a supernatural gunslinger both saves and damns a town under attack by a group of thugs. Eastwood’s film is loaded with subtext and was likely inspired by a spaghetti western from a few years earlier called Django the Bastard, though it’s more known by the title The Strangers Gundown these days. At any rate, it seems to have given Eastwood some food for thought, and he revisited the same territory later on with Pale Rider, yet another supernatural western with a lot on its mind. Another movie that I think counts as a mainstream entry in the weird western is Westworld which novelist Michael Crichton directed and wrote. It’s a story of a killer cowboy robot (played by Yul Brenner) at an amusement park for adults, and it’s become something of a classic.

You can’t talk about weird westerns without mentioning kung fu spaghetti westerns. Martial arts films were so popular in the ‘70s that they were getting mashed up with all sorts of other genres to spice up flagging genre ticket sales. Out of this period came movies like My Name is Shanghai Joe aka The Fighting Fists of Shanghai Joe, which features Chen Lee as Shanghai Joe and Klaus Kinski as “Scalper Jack.” Joe is well-versed in martial arts and uses kung fu to fight for the freedom of some Mexican slaves. Another worthy film in the subgenre is The Stranger and the Gunfighter, which stars Lo Lieh against Lee Van Cleef as a martial arts expert seeking his murdered uncle’s treasure. The map to the buried treasure is split into four parts, each one tattooed on the body of one of his dead uncle’s girlfriends. How’s that for originality? You get kung fu, Lee Van Cleef, buried treasure, AND flesh. The only thing that could make this better is if legendary kung fu movie makers the Shaw Brothers had a hand in producing it. Oh yeah. They did. 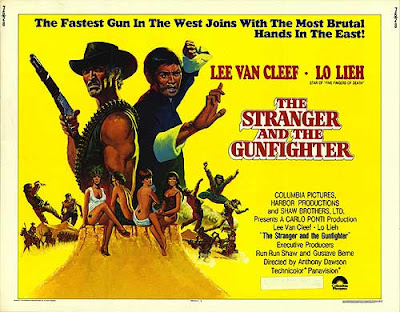 During the VHS days, there were a ton of weird westerns as exploitation made its way into homes everywhere, and these films were almost always made on a shoestring budget with very little production value. Bright spots during the ‘80s and ‘90s include 1988’s Ghost Town, (coming to DVD and Blu-ray next month thanks to Scream Factory), all of the movies in the Tremors series, and Oblivion from our friends at Full Moon. I consider John Carpenter’s 1998 film Vampires, as well as the direct-to-video sequel with Jon Bon Jovi, to be vampire westerns in a modern setting. Before long there was a whole new generation of filmmakers like Quentin Tarantino and Robert Rodriguez who seemed to have grown up watching weird westerns, and I consider the entire From Dusk Till Dawn series to fall into the subgenre.

The weird western is still twitching today, though usually with mixed results. Shanghai Noon and Shanghai Knights resurrected the kung fu spaghetti western formula from the ‘70s to wide appeal. Movies like Wild Wild West, Ghost Rider, and Jonah Hex had high concepts but low returns. Most recently, 2011’s Cowboys & Aliens attempted a revisionist take on the weird western with a big budget and big names. Movie trends come and go, but the weird western is a subgenre that isn’t going anywhere anytime soon. Consider working in a weird western to this year’s Junesploitation calendar; I bet you could find one for just about any day of the month.
Posted by Patrick Bromley at 12:00 PM