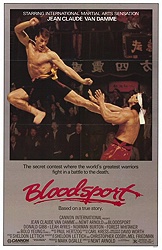 Adam Riske:
June 19: Cannon! You can't go wrong by picking a Van Damme movie today. Bloodsport is my favorite, but Cyborg is pretty badass as well. Not to mention Kickboxer. So many choices.

June 20: Free Space! My appreciation for The Lost Boys has grown in the past few years, so if you're feeling the need for a personal Vampire day it's a great pick to revisit or see for the first time. Amazing soundtrack.

June 21: Italian Horror! I recommend Black Sabbath every year on Italian Horror day, so why break with tradition? It's one of the best horror anthologies ever made.

June 22: Robots! I know...I know...another Van Damme movie? Yes, especially when they're as exciting as Universal Soldier: Day of Reckoning.

June 23: Blaxploitation! I adore Jackie Brown and still feel it's underrated despite many people now considering it a terrific entry in Quentin Tarantino's filmography. Max Cherry might be the best character he's ever written.

June 24: Teenagers! Bill and Ted's Excellent Adventure is not as good as Bogus Journey, but it's goofy fun in its own right, especially when Napoleon is on-screen. 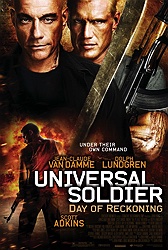 Adam Thas:
June 19th: Cannon! Bloodsport (1988, dir. Newt Arnold) I will forever be in debt to Michael Pomaro, who introduced me to this movie. This is Van Damme at his finest. It’s a great action movie with some incredible fight scenes and, in case you were hoping for more of a reason to watch it,  stars Don Gibb, or as you probably know him, Ogre from Revenge of the Nerds. It makes me happy that this movie exists and is worth your month's payment to Netflix.

June 20th: Free Space! Universal Soldier: Day of Reckoning (2012. dir. John Hyams) Let’s just say you watched your Cannon! movie yesterday and you really want some more Van Damme and action; you should watch he movie that made me a Scott Adkins fan. Day of Reckoning is a little outside the box in terms of an action movie, as it’s trying to be a bit more cerebral and I don’t know if it 100% pulls it off. However, it does deliver on the action. Great car chases and, at about the one hour mark, has what may be one of the best fight scenes of all time between Adkins and Arlovski.

June 21st: Italian Horror! I know that this is going to come off as a cop-out, but out of all the genres of movies this is the one I know the least about, and to be honest, I’m not that big of a fan of, so I’ve got nothing for you. Sorry. Go bug Pomaro.

June 22nd: Robots! Automata (2014, dir. Gabe Ibanez). I’m recycling this recommendation from a few months ago because I really did like it, and when you like something you want other people to see it. Ibanez makes a very interesting movie about AI and does some things that I haven’t seen in sci-fi in a while …. Practical Effects! Yeah, a lot of the robots in this movie are actual robots and you can see and feel it when the characters are interacting with them. See this one.

June 23rd: Blaxploitation! The Monkey Hustle (1976, dir. Arthur Marks) You don’t get much better of a Blaxploitation movie than a movie starring one of my favorite from the genre: Rudy Ray Moore. Now to be fair, Moore isn’t in the movie a lot; it more follows a group of young kids who are trying to master the art hustling and get caught up in plot to stop the construction of a highway in Chicago. I don’t think you can get further from an Oscar winning movie, but it’s fun, it’s short, and “You’ve been warned, sucka!”

June 24th: Teenagers! Not Another Teen Movie (2001, dir. Joel Gallen) This one I think gets lumped in sometimes with the Epic Movie/Meet the Spartans/gigantic ball of shit that comes out every few years. Not Another Teen Movie is along those lines in the sense that it is a parody, but in my humble opinion is actually funny. It spoofs John Hughes movies and the subsequent barrage of teen movies from the late '90s. It stars a VERY young Chris Evans and has some wonderful gags that I think any fan of the '80s (and '90s) teen movie can enjoy.

June 25th: '90s Action! Best of the Best 3: No Turning Back (1993/95, dir. Phillip Rhee) This is one of the first movies I ever recommended on Netflix This Movie and I stand by my suggestion. Best of the Best 3 sums up the straight to video type of movie we got used to in the '90s. It has a fairly good plot and stars an incredibly '90s Gina Gershon as the love interest. An uncredited R. Lee Ermey plays a white supremacist who is hell bent on removing Tommy (who is Asian) and his family from town. I had a lot of fun with this one. 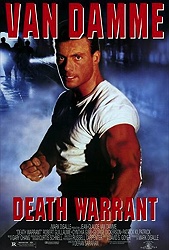 Heath Holland:
June 19: Cannon! Bloodsport (1988, dir. Newt Arnold) One of my favorite Van Damme movies is also a classic from The Cannon Group. This movie is worth watching just for Van Damme's ridiculous (awesome) splits.

June 20: Free Space! Team America: World Police (2004, dir. Trey Parker) For free day, how about a little puppetsploitation? Or is it marionettesploitation? The South Park creators turned their talents to puppets in this film that manages to lampoon just about everything, including jingoism and terrorism, without being preachy. America: f**k yeah!

June 21: Italian Horror! Black Sabbath (1964, Mario Bava) I've only seen a couple of Italian horror movies that I liked, and this is the only one of them that is on Netflix. I like Black Sabbath because it has Boris Karloff in it and it's from the sixties, but just be aware that an Italian horror recommendation from me is like a steakhouse recommendation from a vegetarian.

June 22: Robots! Robocop (2014, dir. Jose Padilha) You know it's a robot movie because it has "robo" in the title. Also, be sure you're pronouncing today's theme correctly: it's "ro-butt."

June 23: Blaxploitation! Bamboo Gods and Iron Men (1974, dir. Cesar Gallardo) This one's a little off the beaten path, but if you've seen all the Pam Grier and Fred Williamson movies, this AIP martial arts comedy is right up your alley.

June 24: Teenagers! Teen Beach Movie (2013, dir. Jeffrey Hornaday) The appeal of this Disney teensploitation movie might be limited for our crowd, but there's still goodness to be had. Modern teenagers find themselves inside a 1960s musical beach movie, with all the campy results that you'd expect. It's both a commentary on a thing as well as an affectionate tribute. If you have kids and are struggling to watch exploitation movies with them around, this is one you can share with them.

June 25: '90s Action! Death Warrant (1990, dir. Deran Sarafian) Yes, I'm recommending another Van Damme film. It's a double dose of Van Dammage! Death Warrant is another one of those "good guy in a bad prison" movies, but with that Van Damme quality guarantee, "asses kicked or you get it for free." 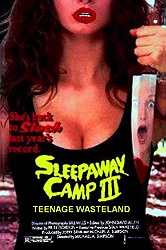 June 20: Free Space! The Sex Thief (1974, dir. Martin Campbell) Another winner from the director of The Ecstasies of Women! 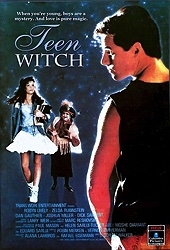 Patrick:
June 19: Cannon! The Apple (1980, dir. Menahem Golan) Because there aren't that many Cannon Films on Netflix and I've already recommended Cyborg, New Year's Evil and Enter the Ninja, I have to recommend The Apple. Probably don't watch it, though. Watch one of those others instead.

June 20: Free Space! Prison Girls (1972, dir. Tom DeSimone) If you're looking for a break from exploitation movies, do not watch this. This is one of the most exploitation-y movies you'll watch this month.

June 21: Italian Horror! Troll 2 (1990, dir. Claudio Fragasso) Listen. LISTEN. You might not love Italian horror. There's no shame in that. There was a steep learning curve for me; it took me years to become as infatuated with it as I now am. And because the only offerings on Netflix are a bunch of Bava movies, maybe you want to give yourself a break and watch Claudio Fragasso's cult masterpiece Troll 2. You're guaranteed to have fun. #Nilbog

June 22: Robots! Doomsday Book (2012, dir. Kim Jee-woon et. al.) This Korean anthology film is flawed and uneven but always interesting, and the middle segment about a robot that achieves spiritual enlightenment is one of its highlights.

June 23: Blaxploitation! Brotherhood of Death (1976, dir. Bill Berry) A couple of black Vietnam vets go to war with the KKK. Yes, the movie is as awesome as it sounds. I will be watching this today for sure.

June 25: '90s Action! Drop Zone (1994, dir. John Badham) There are some really good '90s action movies on Netflix, but that's not what this day is about. It's about watching something slick and stupid, and boy does Drop Zone fit that bill.
Posted by Patrick Bromley at 12:00 PM