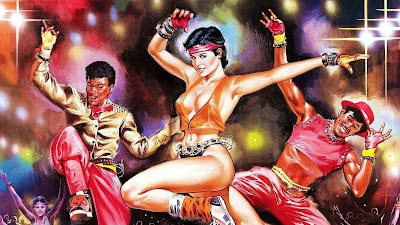 The only thing as good as watching Cannon movies is listening to them!

I've spent the last five years at F This Movie! talking and writing about my love of Cannon Films, the independent studio run by Menahem Golan and Yoram Globus from the '70s through the early '90s. They made all kinds of movies but specialized in genre stuff, particularly action -- which, as a kid who grew up loving those types of films, made me love Cannon at an early age. That makes a day like today -- when we celebrate Cannon Films as part of #Junesploitation -- such a joy.

It's in this spirit that I've compiled 20 songs from Cannon films that capture some of the highlights, both musical and cinematic. Was the music from Cannon movies good? Rarely. It was, like a lot of their movies, an attempt to approximate and cash in on something more polished and mainstream. Occasionally it was ahead of its time; more often than not, it was very much of it.

Try as I might to find embeddable versions of some of these songs, it was pretty much impossible. A few of the videos will kick over to YouTube, where you'll be able to hear the songs in their entirety. Sorry about that. I did the best I could.

There's no more important soundtrack in the Cannon library than the one for the original Breakin', and there's no bigger song on that soundtrack than the movie's theme song "There's No Stoppin' Us." This has to start things off.

Not the last appearance of a Stan Bush song used in a Van-Damme martial arts tournament movie on this list. While he has become best known for "You've Got the Touch" (thanks more to Boogie Nights than Transformers: The Movie, where it originally appeared), Stan Bush was the go-to inspirational power anthem composer of choice for Cannon in the late '80s. With good reason. Listen to this shit and tell me you don't want to run out and split kick come fuckers in the face right now.

Many of you probably know this one from the Reservoir Dogs soundtrack, but it actually belongs to a Cannon film of the same name -- one of their rare "art" movies directed by Robert Altman with a screenplay by Sam Shepard and little to no Charles Bronson in it whatsoever. But it's a good song and a reminder that, yes, every once in a while Cannon stopped cranking out wonderful genre trash long enough to make stuff for grown ups.

This song -- one of a small handful of songs that was a hit outside of the Cannon universe and still gets radio play to this day -- scores points for pulling double duty, appearing in both Under Cover and Albert Pyun's dark teen thriller Dangerously Close, in which it serves as the unofficial theme song.

Cannon tried to cash in on the success of Breakin' by making a movie about what they saw as the next big "fad" for young people: rap music. The end result is a film that does more damage to rap than the deaths of Eazy-E, Biggie and Tupac combined. While the title track by Lovebug Starski is a no-brainer to include on this playlist, I opted to go with "Snack Attack," a mid-movie lark in which the characters tease a guy for being fat. At almost no point are the actors-playing-rappers on beat with the music. They fail to be in unison on the VERY FIRST LINE and no one thought to shoot another take.

The Missing in Action movies were a Cannon staple in the '80s, but it took three entries in the series before someone thought to slap a terrible, terrible ballad onto one of them. That someone? Chuck Norris' brother Aaron, who directed the third installment.

As cool as Alan Silvestri's theme music for Chuck Norris/Lee Marvin/Robert Forster in brownface terrorist actioner The Delta Force is, if you've ever seen the movie you already know two things: 1) it plays over practically every scene in the movie, not matter how unexciting and 2) you will never stop humming it to yourself.

It's hard to pick which terrible song from the terrible, tacky disco sex musical The Apple belongs on this Cannon mix tape. I went with this one.

The 1982 teen sex comedy The Last American Virgin has a really incredible soundtrack, including hits from The Police, The Cars, U2, Oingo Boingo and Devo. I don't know if the entire budget was spent securing music rights or if the movie was just made at a time before bands realized what their songs was worth. Anyone who knows this movie, however, knows why this Quincy Jones ballad is the most important song in the movie, playing as it does over the emotionally shattering final moments. Holy shit the end of this move.

Kick off side two with the theme to Breakin' 2, released THE SAME YEAR as the first film. The sequel is poppier, more colorful and cartoonish. This song reflects that. It makes zero sense as a breakdancing song, but it's such a fun number that I don't care.

Tempted as I was to put John Cafferty and the Beaver Brown Band's "Voice of America's Sons" on the list, the Cobra slot really must belong to "Angel of the City." This is the number that plays over the mid-movie montage in which Marion Cobretti (!) questions people while Brigitte Nielsen models alongside robots. Go ahead, read that again.

Us '80s movie nerds grew up loving Dean Cameron. Sometimes I wonder if he wakes up at night wishing he hadn't done this.

Another Van Damme competitive fighting movie from Cannon, another Stan Bush anthem to go along with it. This one's not really as good as "Never Surrender" even though it comes from the better of the two movies.

There is a great story told in the new documentary Electric Boogaloo: The Wild, Untold Story of Cannon Films about the rush to get two competing "lambada" movies into theaters. The forbidden dance craze was so popular for all of a few weeks that both Cannon and Columbia pictures turned it into a movie. They ended up opening on the exact same weekend opposite one another, though Cannon's Lambada: Set the Night on Fire (starring Melora Hardin of The Office and Breakin's Adolfo Shabba-Doo Quinones) outgrossed Columbia's The Forbidden Dance. Cannon wins!

While not as memorable as Alan Silvestri's theme for The Delta Force, Bill Conti's orchestral score for Masters of the Universe -- one of the most expensive and ambitious movies in Cannon's library and an attempt to play alongside the majors -- is effective in its generic '80s fantasy epic way.

Charles Bronson was neck and neck with Chuck Norris for Cannon's biggest star in the '80s, but very few of Bronson's movies have memorable songs associated with them. But then there's "Murphy's Law" from Murphy's Law, which stands out not only because it's named for the movie in which it appears but also because it's performed by the film's co-star, Kathleen Wilhoite. It's Cannon's bad approximation of a Bond theme and it is magnificent.

For as much as we associate Cannon with exploitation, they made very few horror movies (especially that weren't directed by Tobe Hooper). 1980's New Year's Evil is one of their rare slashers, and a crazy one at that. This theme song by Shadow is awesome and perfectly fits the film.

This under-seen and underrated (it's never been released on DVD or Blu-ray) drama is unusual for a Cannon movie in that it's not cashing in on any trends and not really exploiting anything but its soundtrack (which as far as I know was never released as an album). The film is formulaic but the music is good for being nondescript bar rock. "Heart to Heart," performed twice in the film by star Roger Wilson, is the standout. And yes, that's Leif Garrett pouting at the back of the stage.

This might be the biggest hit single to ever come out of a Cannon movie -- bigger, even, than the arm wrestling movie in which it is featured. Neither the song nor the movie are very good, but both represent Cannon at the height of their power.

Closing out this Cannon music mix tape is the theme from Breakin' 2, which is a better breakdancing song than "I Believe in the Beat" but which doesn't make me nearly as happy. Still, I would be content to listen to this playlist on a daily basis. I know not all the songs are great -- I would skip over "Set the Night on Fire" every single time it came up -- but this music immediately puts me in Cannon Land. I love spending time there.

I hope you'll spend some time there with me. And Chuck Norris.
Posted by Patrick Bromley at 5:00 AM