Off the Shelf: Dangerously Close 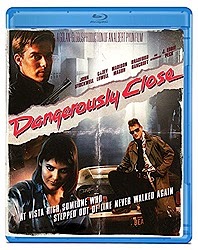 My love of genre director Albert Pyun is well-documented on this site, so it brings me great joy to finally see what turns out to be an underrated '80s classic long unavailable in wide release.

After years of languishing in semi-obscurity, the 1986 teen drama Dangerously Close is finally getting its due courtesy of a Blu-ray release from Olive Films. This is great news for two reasons: 1) it's never been available even on DVD, meaning this is the first time many of us who missed the movie back in the VHS days are at last able to see it and 2) it goes a long way towards proving just what an underrated filmmaker and visual stylist director Albert Pyun really is. This is one of his best movies.

J. Eddie Peck stars as Danny Lennox, an introverted student at elite Vista Verde High School. When a series of increasingly escalating bully attacks results in a student's throat being slit, Danny begins to pursue answers. That leads him into the school's inner circle of cool kids, led by Randy McDevitt (John Stockwell), a charismatic rich kid with a hot girlfriend (Carey Lowell) and a very specific idea about what kinds of students are "right" for Vista Verde. It's kind of the flip side of the coin to Class of 1984, but whereas that movie saw a gang of punks running the school through terrorism and fear tactics, Dangerously Close has the jocks and preps terrorizing any kids who dare to be different. It's a little more like actual high school in that way. 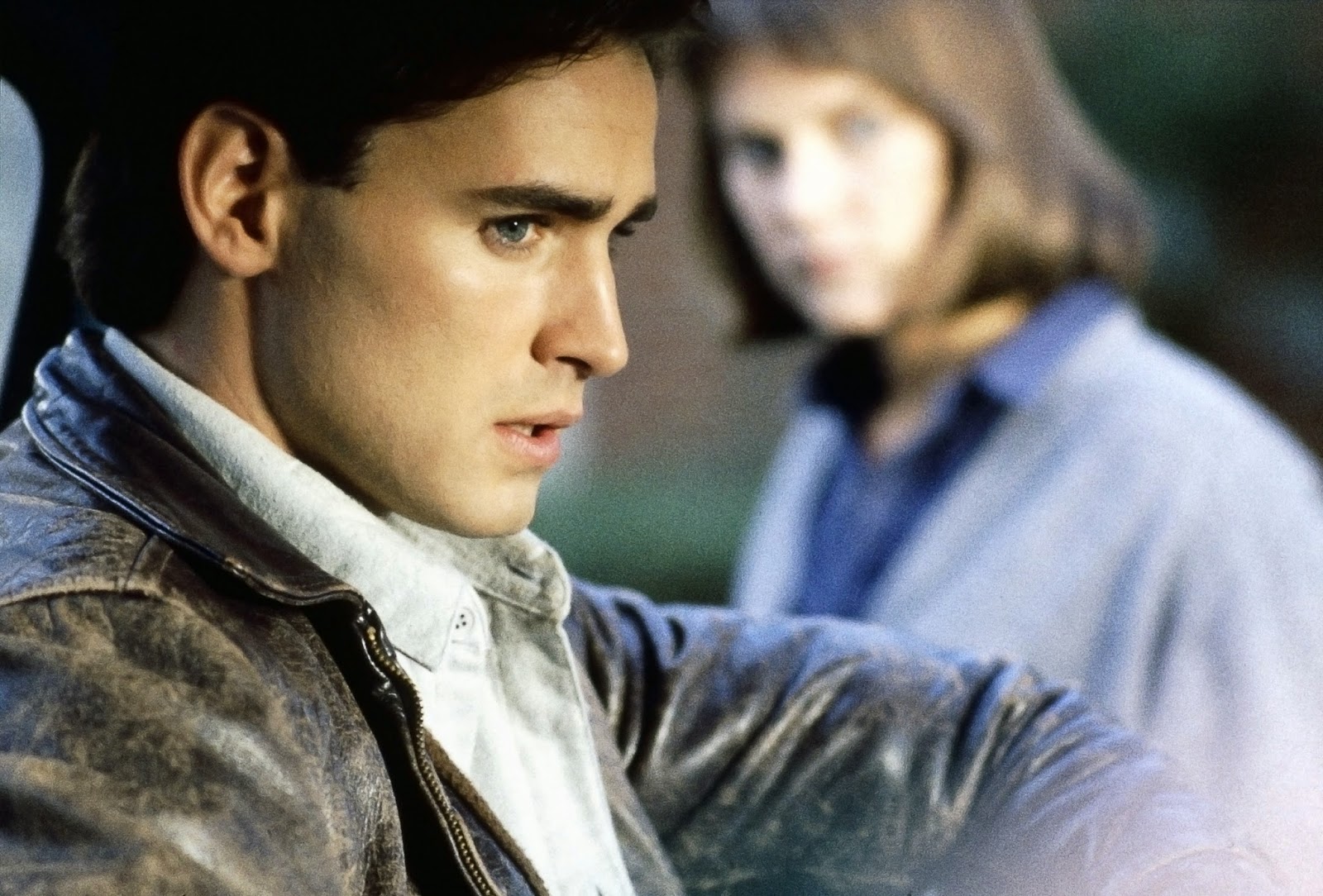 Though made for Cannon Films at the height of their exploitation power, there's nothing that feels cheap or exploitative about Dangerously Close. While clearly made to capitalize on the popularity of the teen genre at the time, the movie actually shows up most of its contemporaries -- it's a Cannon "knock off" that surpasses its bigger-budget rivals by virtue of its incredibly stylishness. How Dangerously Close is not better known today I cannot say, as it's one of the few teen movies of the MTV era (era) to actually use the visual language of music videos to tell its story (it's also reminiscent of '80s MTV thanks to its incredible soundtrack, which includes Van Halen, Robert Palmer and "Blood and Roses" by The Smithereens, which winds up being the movie's main theme; kudos to Olive Films for retaining all of the original music). This is a gorgeous looking movie, packed with backlighting and neon and frames filled with smoke -- it's the teen movie by way of Tony Scott or Michael Mann. Think Less Than Zero without the pretense and bullshit.

It's fitting that the movie is directed by Albert Pyun, a genre director working outside the system for his entire career. Both he and the fans of the kinds of movies he has spent 30 years making are just like the misfits and outsiders at the Dangerously Close high school, so it makes sense so the movie sides with them against the rich kid bullies (read: studio Hollywood). And while Pyun is most commonly associated with science fiction (more specifically the post-apocalyptic subgenre), Dangerously Close is novel in that it exists free of any of those -- and pretty much all genre -- trappings. Yes, there are elements of an action film and there's a rawness and sense of edgy menace to the film's slick surfaces, but it's essentially a drama. He didn't get enough opportunities to direct those, and Dangerously Close proves that he should have made more.

The deeper into '80s cult and genre movies you go, the better you can appreciate a movie like Dangerously Close if only for the cast that's assembled. There's Branford Bancroft from Bachelor Party and Universal Soldier. Thom Mathews from Return of the Living Dead and Friday the 13th VI: Jason Lives has a part. Miguel Nunez is there, too, making it a mini RotLD reunion. Dedee Pfeiffer and Robert Rusler both show up, also making it a mini Vamp renunion (and any movie with Dedee Pfeiffer is automatically better than the same movie without Dedee Pfeiffer). Don Michael Paul from Robot Wars has a role. There's even a brief performance from Dru Anne Perry, whose only other major movie role is in Pyun's own sci-fi musical Vicious Lips. John Stockwell, who previously starred in Pyun's excellent Radioactive Dreams, has a co-writing credit on the film; he would eventually go on to be a successful director, with credits like Crazy/Beautiful, Blue Crush, Into the Blue and Cat Run in his filmography. How interesting that he slowly climbed the ranks of becoming a filmmaker working with Cannon and Albert Pyun. 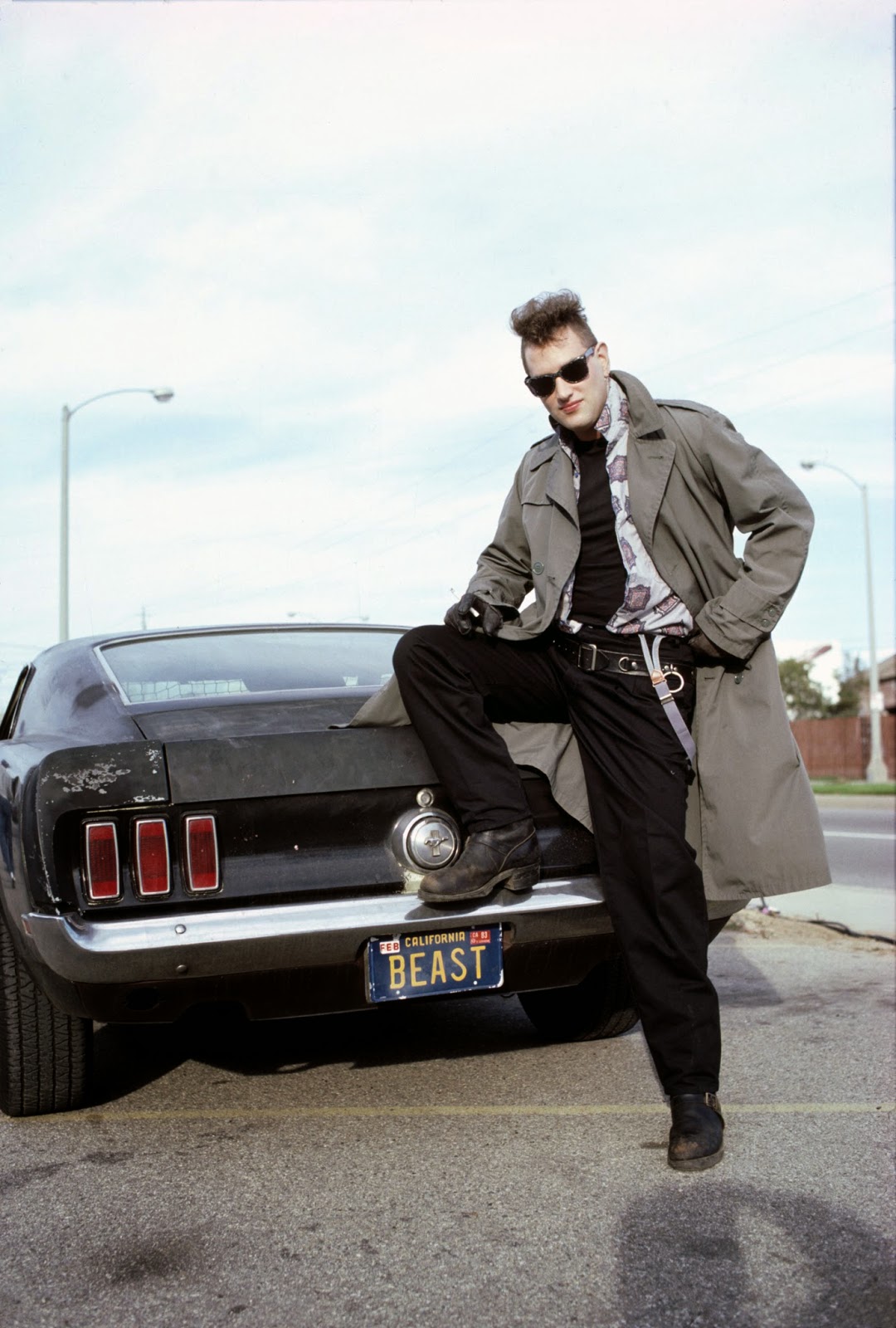 If there is a flaw in the movie, it's the casting of Peck at the center. He's not bad, just a little generic and outshone by the much more colorful and charismatic performances from the supporting players. That might also be a function of the screenplay by Stockwell, Scott Fields and Marty Ross, which also seems more drawn to the bad kids and their dark and fucked up worldview (it probably wouldn't be reaching too far to read the movie as a high school metaphor for Nazi Germany). It's not as though Carey Lowell is significantly better in her feature film debut, but there are fewer demands placed upon her -- she is an extension of the movie's attractive set dressing. She would work with Pyun again a few years later in Down Twisted before hitting it big as a Bond girl in 1989's Licence to Kill. Most of what she demonstrates here is that the camera loves her.

The Blu-ray of Dangerously Close from Olive Films looks great; it's nice to see a movie with this much emphasis placed on visuals receive the 1080p HD treatment, as it will hopefully gain the film a new audience and an improved reputation (it's not that the people who have seen it don't like it, it's that not enough people have been able to see it). Hopefully it's a sign of more Cannon releases on Olive's slate (they already have Allan Quatermain and the Lost City of Gold due out next month and Chuck Norris's Firewalker the month after that). If anyone from the studio is reading, can I make a case for Radioactive Dreams or Down Twisted? Those have never had DVD releases either, and it's long overdue that audiences begin to discover  some of Albert Pyun's lost classics.